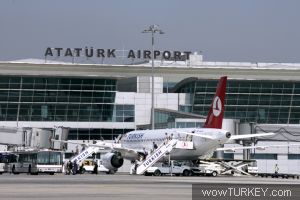 This report comes from Simon Brooke, who reports on the Radisson SAS Hotel at Istanbul Ataturk Airport…

Some six years ago, I reported on the Radisson SAS hotel which is immediately to the north of Istanbul’s Ataturk International airport. I’ve just been back there for a few days and had a splendid time clearing the blanks in my THY fleet plus a goodly number of others….

OK, on this occasion I splurged and got myself a suite for the 4 nights – having done so, I would seriously suggest that (if there are enough of you) somebody gets the suite (I had 386) – everybody else can “slum” it, but the suite is the spotting room! Assuming that the numbers are the same on
higher floors then 486 and 586 would be even better – however, I wanted a smoking room……

My suite had an enormous living room/dining room with picture windows on two sides. The windows on one side gave a superb view of the airport and on the other gave a good view of approaches onto 18L/R or departures on 36L/R. Any arrivals on the cross runway at the far end of the airfield (05) were also easily visible. The suite was huge, easily able to accommodate a bunch of enthusiasts during the airport’s operational day.

There is a Shell petrol station next to the hotel with a shop, so snacks are available.

The restaurants in the hotel are appallingly expensive so I would suggest that a taxi or walk of some 500 yards would offer much cheaper Turkish food.

IST is surrounded by watch-towers manned by armed Turkish Air Force personnel. Two of those watch-towers are clearly visible from the hotel – whether the guys on the watch-towers can see into the hotel rooms is a different matter….

I was keeping the proverbial low profile, aided by a constant supply of “Efes” and had no problems at all with the Turkish authorities. Indeed, when the WiFi failed to operate, I got the hotel’s IT manager up to sort out a cable connection and he was fascinated by SBS (he has a degree in Aeronautics and Meteorology from Istanbul University and is really helpful).

Great spotting hotel – not too good for pics, though and horribly expensive!!!!

THY 737s/738s were a bit of a pain – a substantial number are now operating out of SAW and came nowhere near IST (apart from the very occasional low-level over-flight identified on SBS); I never saw one in AnadoluJet colours at IST.

Other than THY, the major Turkish operators are Onur Air and AtlasJet, with a few Izmir A319s operating for Pegasus.

There are some nice oddities operating into IST as well….

Plus many second-hand aircraft – mostly of the Boeing 737 family – from the “stans”.

Also a few biz jets, and plenty of helicopters around although I only read off and identified one of them.