In May I travelled to Minsk National Airport at the end of an amazing flight on board the last scheduled Tupolev Tu-154 flight in Europe with Belavia (you can read about my trip here).

This was my first time visiting Minsk, so I took the opportunity to check out the spotting situation and make a note of what kind of things you can see.

Minsk National has a single runway, 13/31, with a series of aprons and taxiways along its north eastern side.

To the north is the main passenger terminal, which is in a semi-circular shape with jet bridges off the main building, remote stands at the north end and also opposite to the south. Further south is another large apron which was full of Ilyushin IL-76s, Antonov An-12s and a Boeing 747-200 on my visit. All of these were freighter aircraft operating for Ruby Star and TransAviaExport. However, a number of the aircraft on this ramp and parked to the side of it are currently in storage or withdrawn from use.

This made my visit quite interesting, as it’s not often you see 12 IL-76s all parked together these days. In addition, some more Belavia Tu-154s (some retired), including the Government example, were also visible a little further on.

TransAvia and Ruby Star operate most of the cargo flights, but it’s not uncommon to see Turkish Airlines Cargo and other ad-hoc services by other carriers. There are a few places to see aircraft at Minsk, but you should always be discrete as the hobby is not necessarily understood.

From the road leading up to departures level outside the terminal, as well as the open air car park to the north, it’s possible to see aircraft parked on the remote stands (1 on the map)

If you are flying from the airport, once in the departure lounge there are large windows overlooking the apron and the cargo/maintenance area beyond (2 on the map). You’ll also see movements on the runway.

Walking through the departures area, there are a number of gate areas which jut out towards the ramp. Each of these has a slightly different view of the cargo ramps, so it’s useful if a particular aircraft is eluding you.

Because this airport is quite remote (it is literally at the end of the motorway from the city), it is not easy to explore around the airfield without a local guide and car.

There are some withdrawn airliners at the southern end of the airfield, behind the maintenance hangars, including two former Belavia Tu-134s. These are just visible from aircraft taxiing to the runway if you look towards the trees. The mix of active and stored Il-76s at Minsk National, as seen from the departure lounge. Spotting from the terminal departure lounge at Minsk Airport

A really nice aspect of Minsk National Airport which was a pleasant surprise is its collection of preserved airliners representing Belarus aviation history. These are lined up alongside the main road just outside the terminal, each with a small information board; you can’t miss them, and it’s easy to wander over and take some pictures. The collection includes: Many of these identities are not authentic to the aircraft’s actual history, having been painted as such for the sake of the collection. However, they are all in excellent condition. 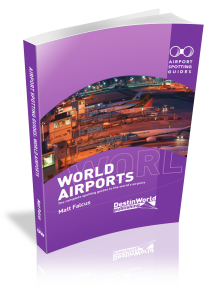 Minsk is just one of over 300 airports to feature in my new World Airports Spotting Guides book. Find out more here: https://destinworld.com/product/world-airports-spotting-guides-2nd-edition/

any idea what the tail numbers of the two TU-134’s parked at MSQ?
Thx