Visitors to Las Vegas were always lured by its casinos, stunning shows, golf and a multitude of other attractions.  But not everyone was familiar with its surrounding areas, especially in the neighboring state of Arizona with one of the Seven Wonders of the World.  In fact, Las Vegas advertises itself as the “Gateway to the Grand Canyon”.

Air Vegas Airlines was one of the oldest and most experienced charter air tour operators based in Las Vegas, having begun operations at McCarran International Airport (IATA: LAS/ICAO: KLAS).  Serving two of the most exciting destinations, Las Vegas and the Grand Canyon, Air Vegas was a very successful company.  Early operations were conducted with a variety of light aircraft, including single-engine Beechcraft A35 and A36 Bonanzas.  As demand increased the fleet expanded to 25 airplanes comprising light twins such as the Cessna 402 and Beechcraft Baron.  But with the continuing air traffic growth at McCarran, Air Vegas began to look for a new location. 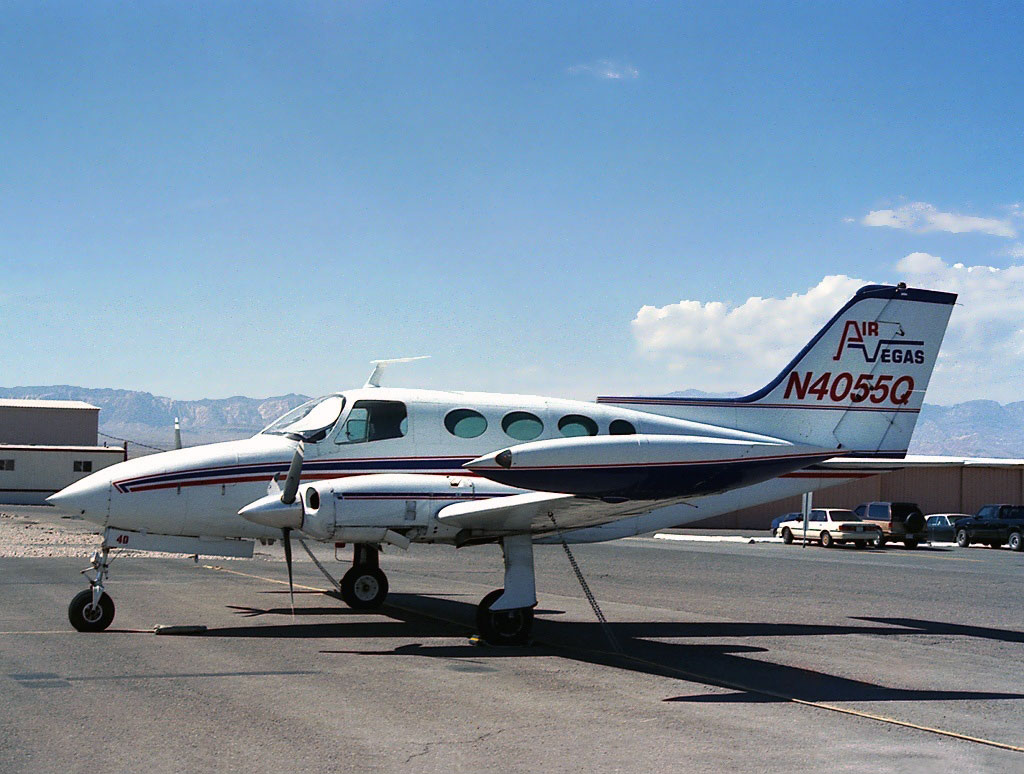 In 1988 the company moved to nearby Henderson Executive Airport (IATA: HND/ICAO: KL15), a single runway airport with no instrument approach, located south of McCarran but still close to the Las Vegas “Strip” and downtown areas.  Air Vegas was the only resident scheduled carrier at the airport that otherwise hosted a handful of general aviation flight schools. 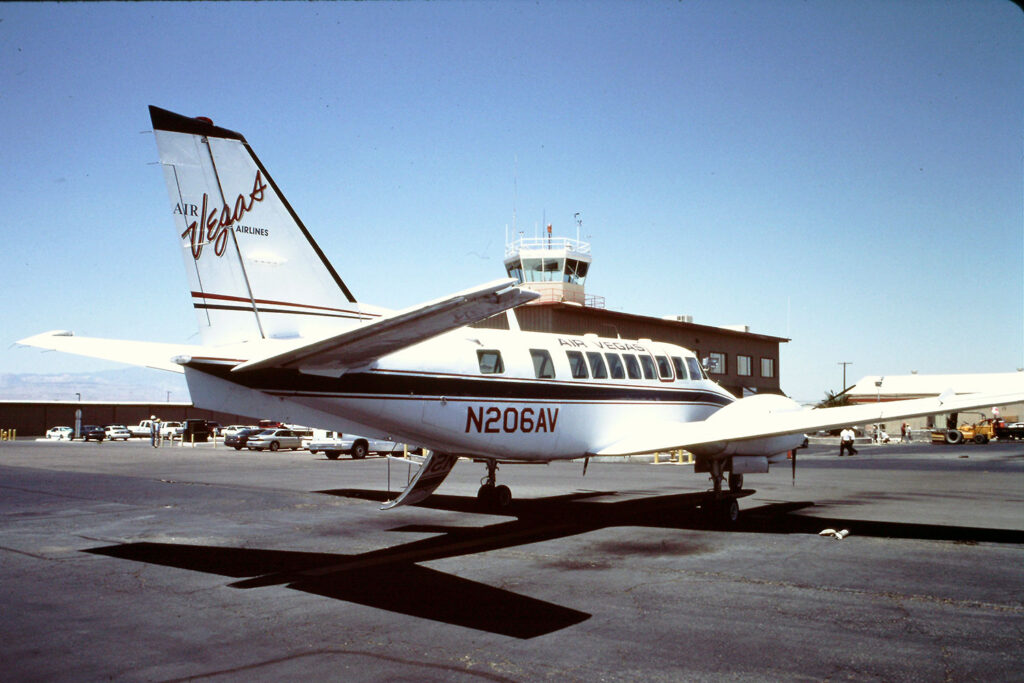 Air Vegas moved to nearby Henderson Airport after traffic at McCarran continued to rise. (Ralph Olson) 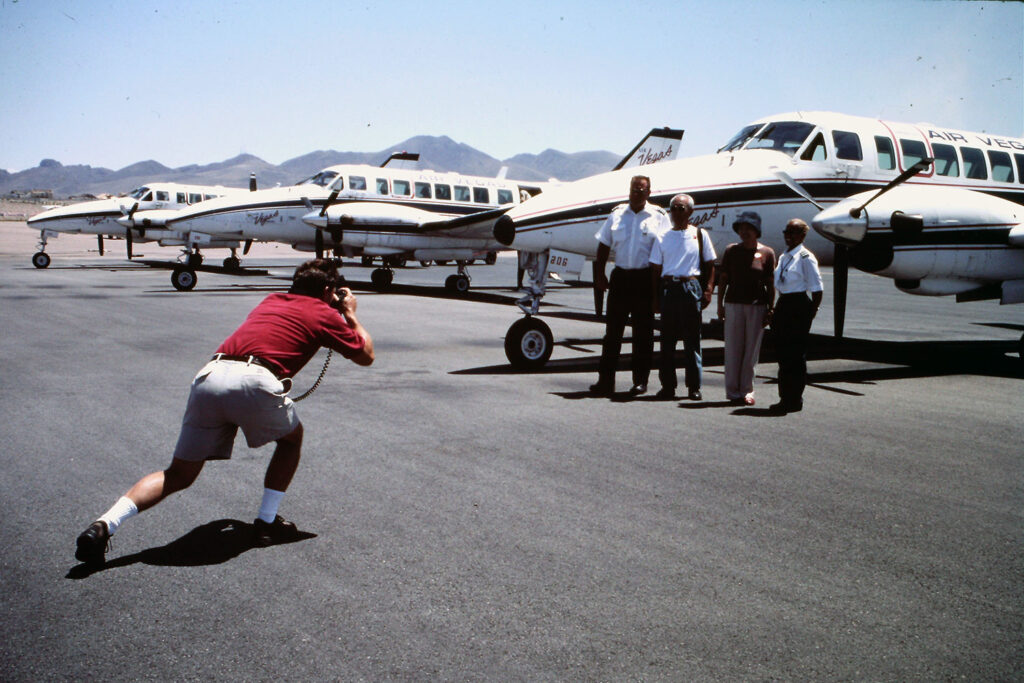 Part of the Air Vegas experience was a personal photo for each passenger with the pilots. (Ralph Olson) 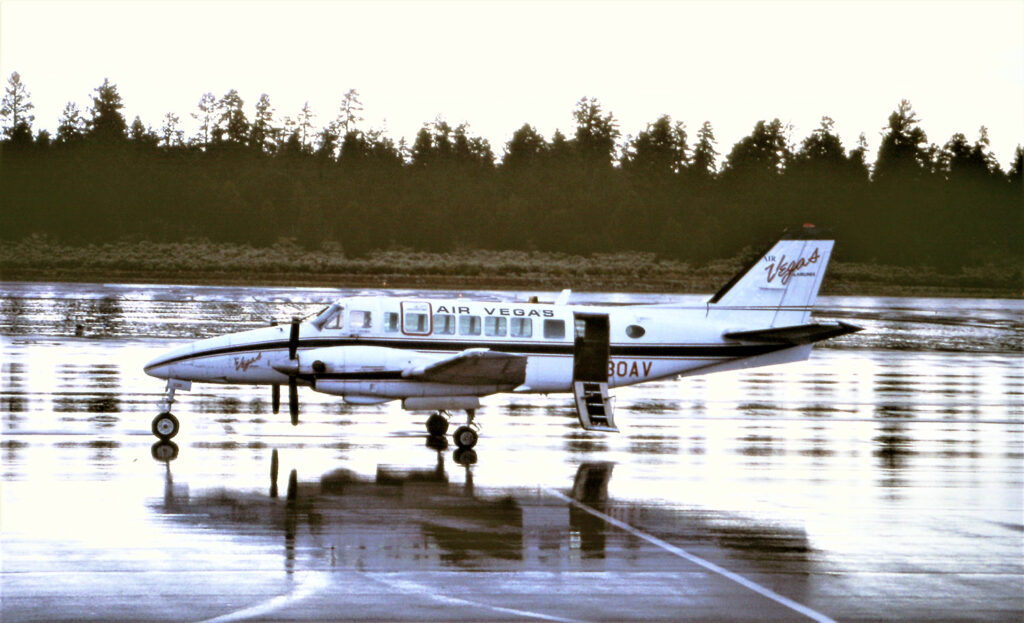 A lone Air Vegas Beech 99 awaits its next load of passengers at Grand Canyon Airport after a passing thunderstorm. (Ralph Olson)

Continuing to expand at its new location, early in the 1990s the Air Vegas fleet was supplemented by the Beech C99 Airliner.  Obtained from a variety of commuter airlines around the U.S., the Beech 99s were completely refurbished and maintained at Henderson Airport by Air Vegas-certified mechanics.

The new type proved an instant hit with customers because of its speed, comfort and large windows.  Dubbed the “Tourliner” by Air Vegas, each B99 seated 15 passengers and was flown by two pilots.  It was the fastest aircraft in service between Las Vegas and Grand Canyon Airport (IATA: GCN/ICAO: KGCN}, with a one way trip taking a little under one hour. 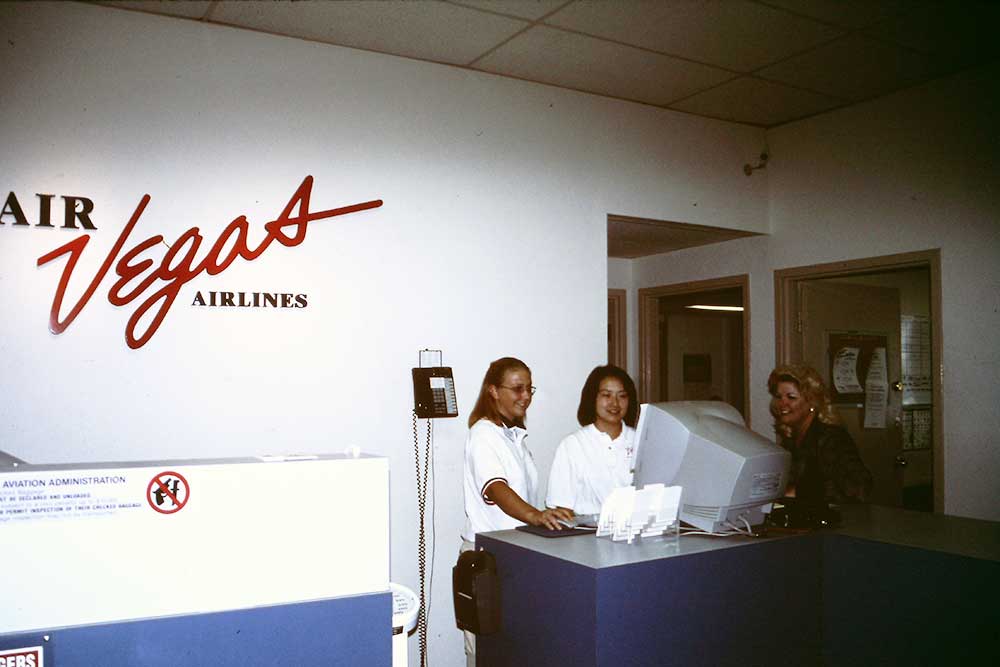 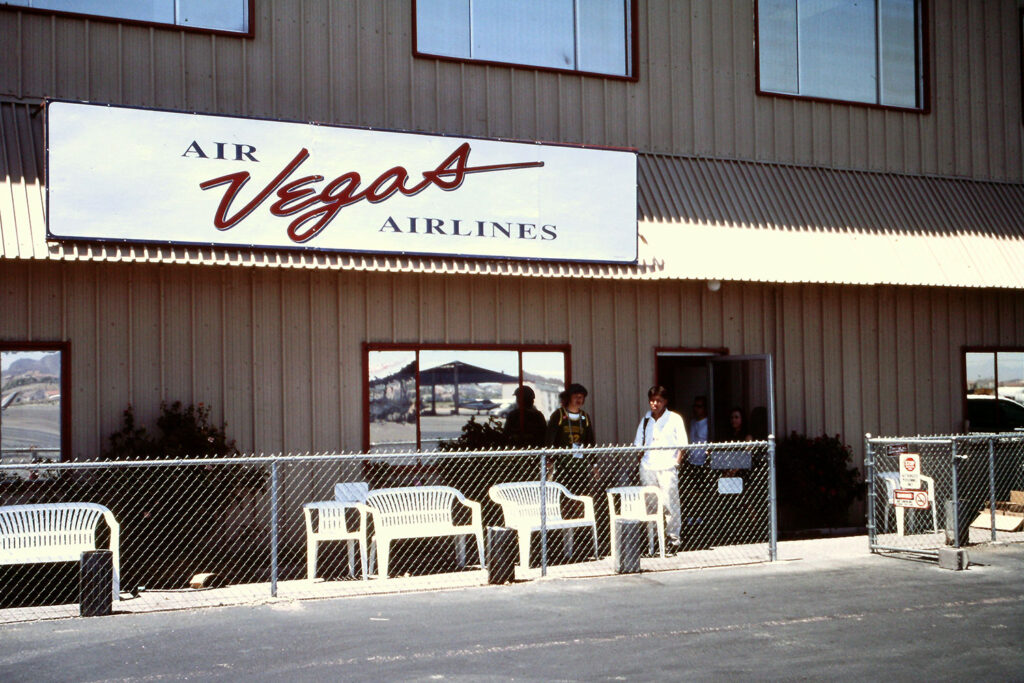 Passengers awaiting boarding at the Air Vegas base at Henderson Airport. (Ralph Olson)

By 1993, Air Vegas was operating only the Beech 99s, with a total of nine aircraft, and the company soon had more than 100 employees at both Henderson and Grand Canyon.

The events on September 11, 2001 had a most definite impact on air travel and tourism throughout the world. Air Vegas was not spared; the company was forced to park several of its B99s due to a huge slowdown in demand.  During 2002, the company moved its operation once again to North Las Vegas Airport, (IATA: VGT/IACO: KVGT), due to major construction at Henderson. 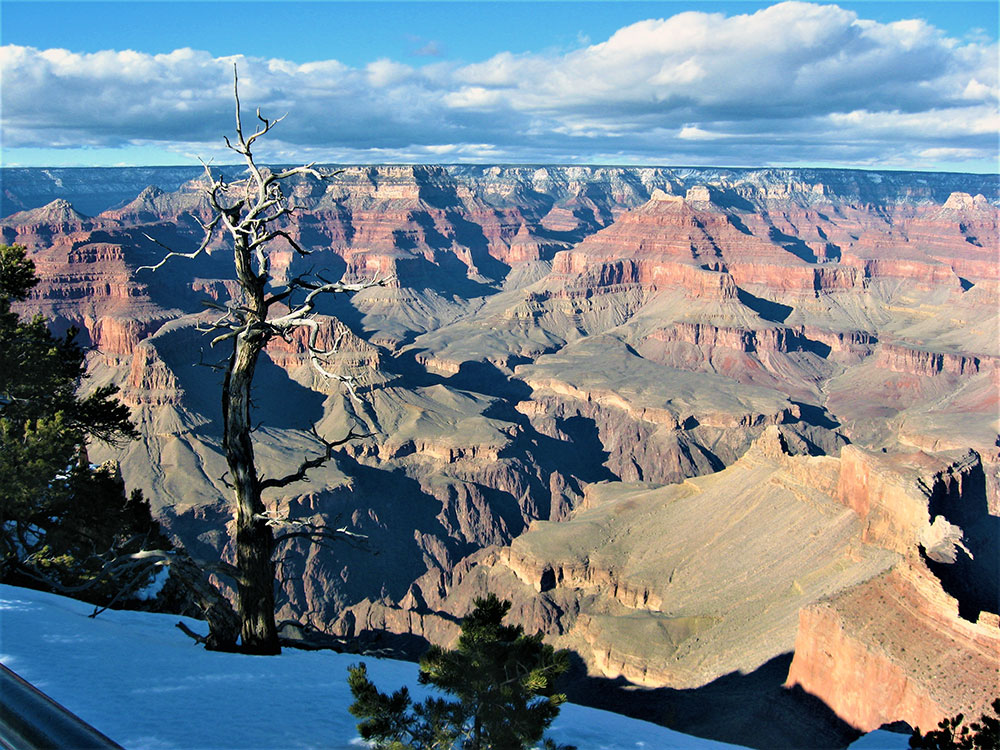 The stunning views at the Grand Canyon awaited all of Air Vegas’s passengers. (Ralph Olson)

When air travel and tourist demand recovered, the fleet of ten Beech 99s flew four roundtrips to the Grand Canyon each day for a daily average of 36 flights.  A typical Air Vegas passenger tour includes a pickup at a Las Vegas hotel, check-in at North Las Vegas Airport and a souvenir photo of each passenger with the pilots.  Once airborne, passengers enjoy a spectacular tour courtesy of the Beech 99, with every seat adjacent to a window. 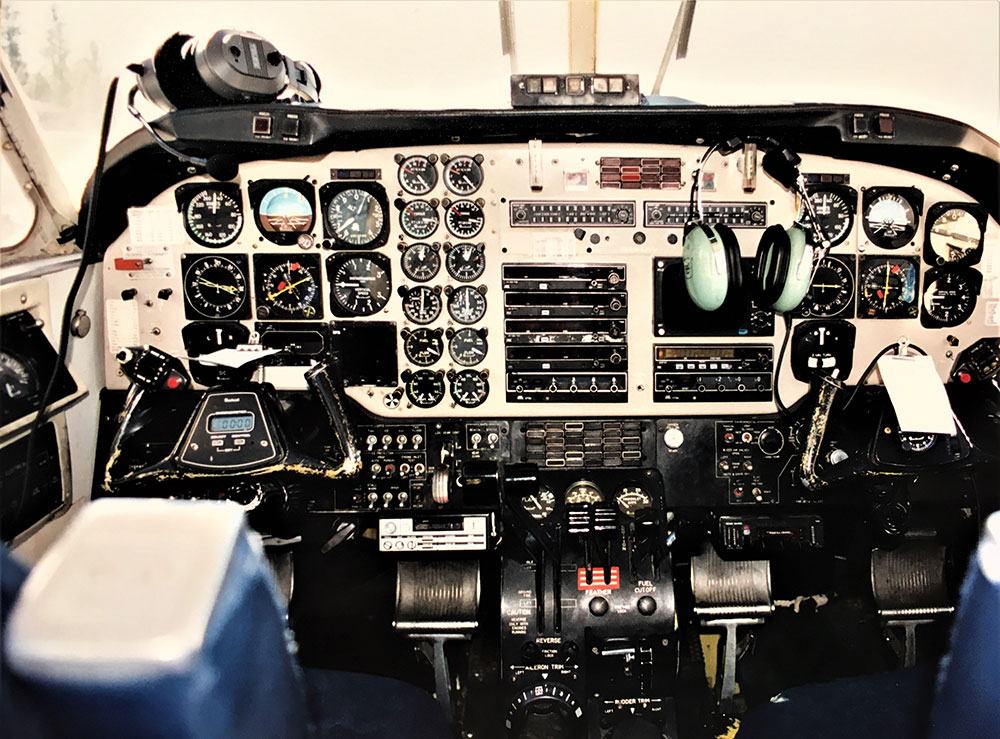 With well over 300 days of sunshine per year, all Air Vegas flights were flown in visual conditions. Nevertheless, the Beech 99s are fully instrument capable and crews maintain IFR proficiency. (Ralph Olson) 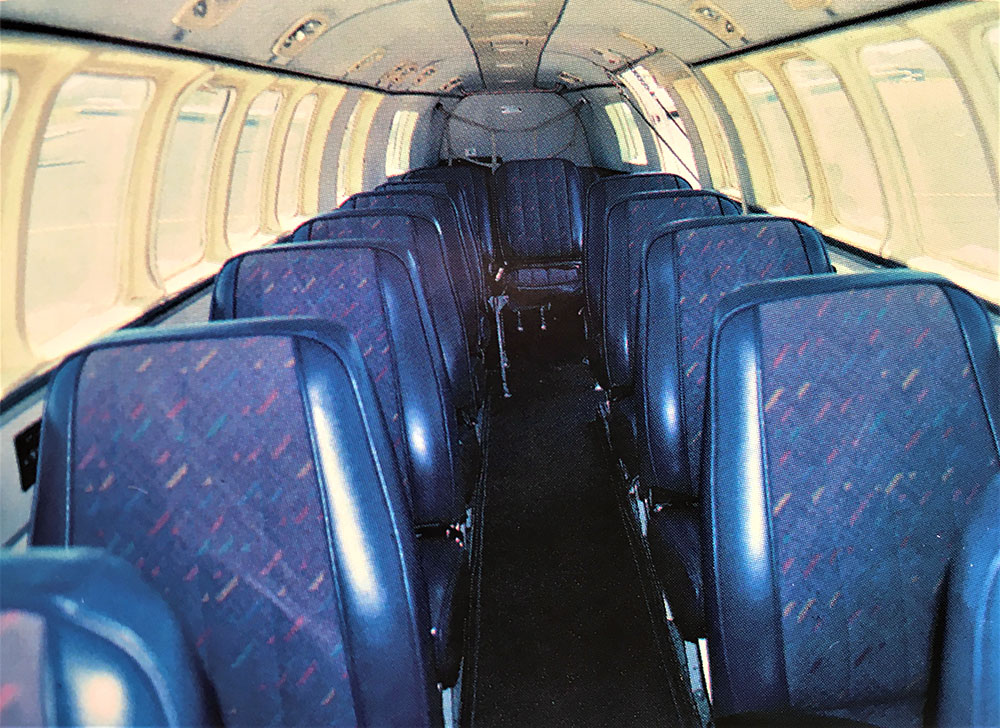 The Beech 99s windows made it a perfect aircraft for flight-seeing operations. (Ralph Olson) 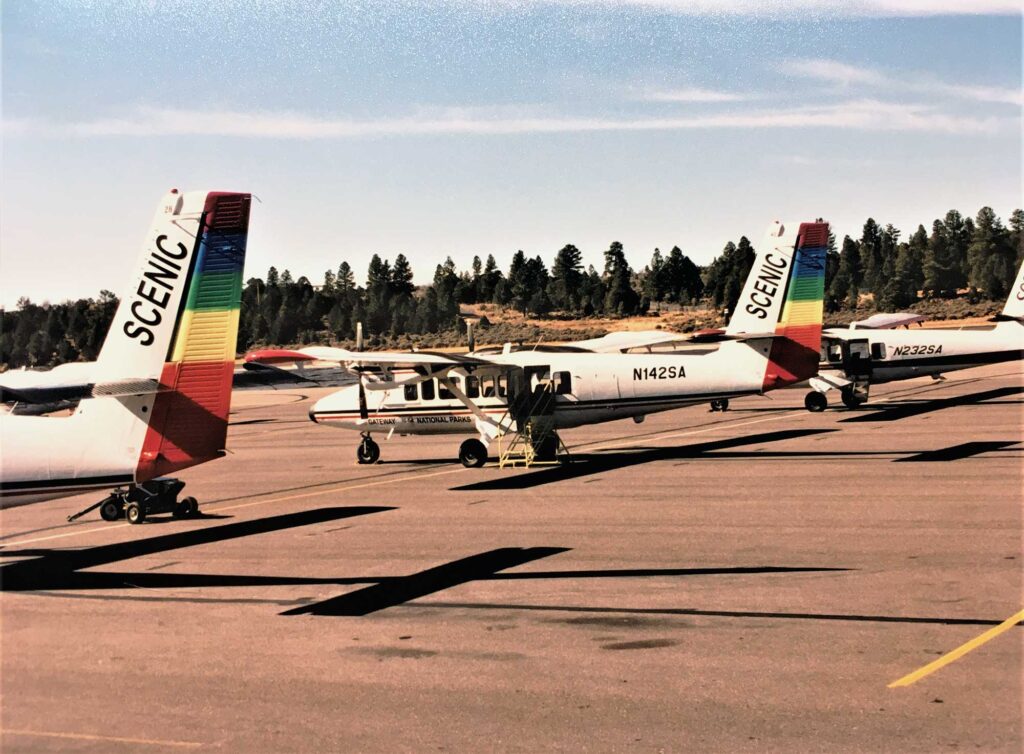 All flights were conducted under visual flight rules (VFR), the routes affording views of Lake Mead and Hoover Dam to the accompaniment of multilingual recorded commentaries designed to inform as well as entertain.  Upon arrival at Grand Canyon Airport, passengers have the option of a number of tours, including a helicopter from the canyon rim descending 4,000 ft. (1,200M) to the canyon floor.

Air Vegas Airlines was, during its heyday, the largest operator of the Beech 99 passenger flights in the world.  Its final Beech 99 acquisition was a low-time airframe that was operated mostly on military and FAA contracts. The airline ceased operations on September 30, 2004, sixteen months after the death of its owner and founder. 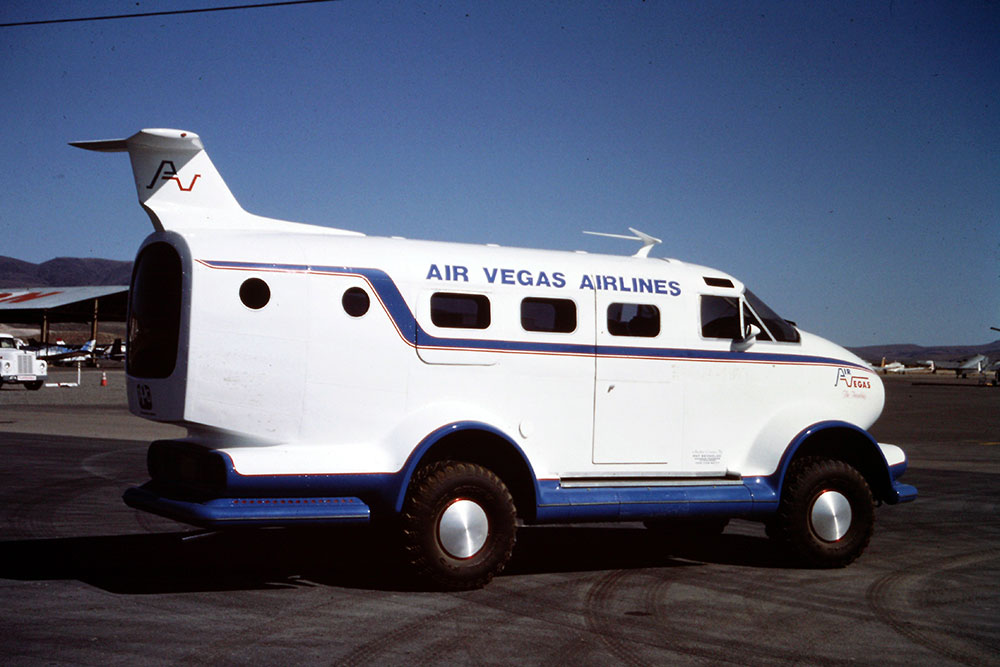 This one-of-a-kind vehicle was used as a promotional tool by Air Vegas. Created from the fuselage of a Beech 18, it saw only limited use due to its lack of air conditioning. (Ralph Olson collection)

The airline flew over 200,000 passengers a year between its North Las Vegas base and the Grand Canyon Airport, 80 per cent of which were foreign visitors to the Las Vegas area.  Air Vegas Airlines bridged the gap between pure entertainment and the awe of nature at its most breathtaking.

Stunning reporting with superior photographs of not only an era of appreciation for Aviation in general
but pure History that we should all
keep alive for next generations and
beyond…….

Thank-you for the fascinating article and my condolences to all who fondly remember Air Vegas Airlines. I am old enough to remember the days before all the mergers that took place, which led to fewer and fewer airlines from which we could select for our travel. I remember how many hours I have logged as I stood in all types of weather on O’Hare’s (Chicago) observation deck as I waited to catch my connecting flight. The loading ramp was awash with an artist’s palette of colors that denoted the liveries of so many airlines. However, that which most caught my attention in the article was the Beechcraft 99’s, an aircraft on which I logged many hours.

For you see, my home was in Danville, Illinois, which was served by Bill Britt’s Allegheny Commuter from Chicago. Mr. Britt bought a number factory new 99’s which I was allowed to inspect (Mr. Britt and my dad were best friends). Whenever I was able to head home, my only options for travel were by air or bus, and guess what? I opted for spending the extra money, and no matter from or to wherever I traveled, my flights always had to bottleneck on the 99… But, I loved it! It was so refreshing to fly for the hour or so under 10,000 feet and spot all the details on the ground. The vast majority of the flight was over rural areas, and no matter the season or time of day, each environment presented its own portrait of the American farmer.

The most entertaining part of my flight had to have been the boarding process, especially when it was winter. When it was time to board, we all walked down the flight of stairs to the ground level of the terminal, onto the ramp with ground crew and pilots directing us, and then up the onboard steps into the plane. Given my experience on the 99, I always took off my coat before exiting the building and gritted my way through the cold and into my seat. Then I relaxed and watched the fun of those having to do hand-to-hand with their coats and jackets in the narrow confines of the aisle. Then, there was the damnable wing spar across the aisle about 3 or 4 rows from the front. I never saw anyone get hurt, but most either forgot about its presence or did not see it, as it generally tripped most passengers as they made their way to the front. You sort of had to have been their to appreciate the humor of it all.

I could go on with all the stories I have from those short flights, but given this is a comment, I have to be satisfied with leaving you with the “Reader’s Digest” version. Thank-you again for the article. It is articles such as this that keep me reading your posts.