One of the newest hotels to open at London Heathrow which is useful for spotters is the Courtyard by Marriott on Bath Road.

Recent airings of Big Jet TV brought this hotel to my attention thanks to its open air terrace with seemingly fantastic views, so I booked a room to check it out. 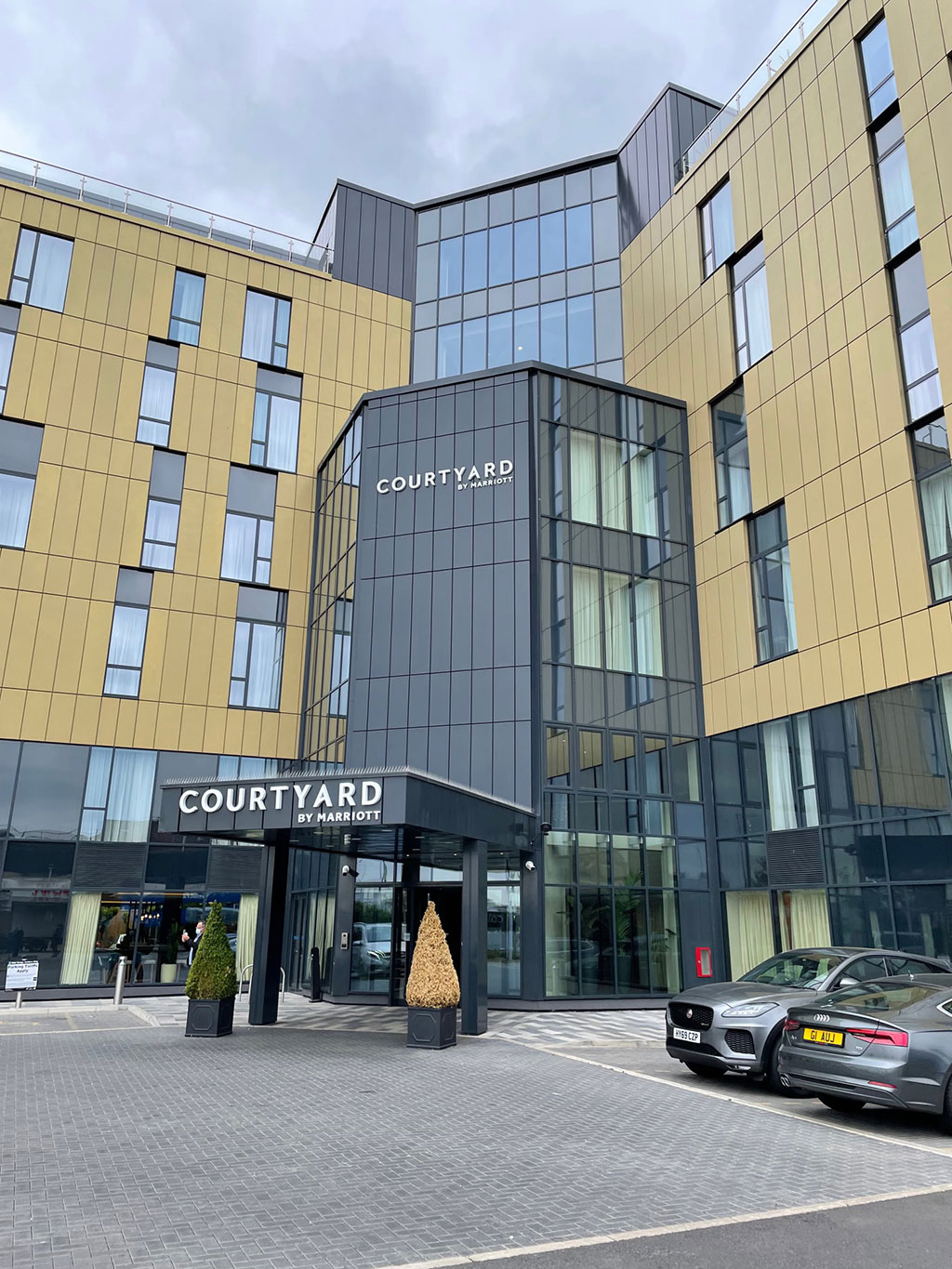 The Courtyard by Marriott at London Heathrow is situated at the north-east corner of the airfield, on Bath Road. Its postcode is UB3 5EY.

You’ll find it next door to the Best Western Ariel hotel (previously the Holiday Inn Ariel), which we have reviewed in the past.

It is located right next to the threshold of runway 27R at Heathrow, and close to the British Airways maintenance base. 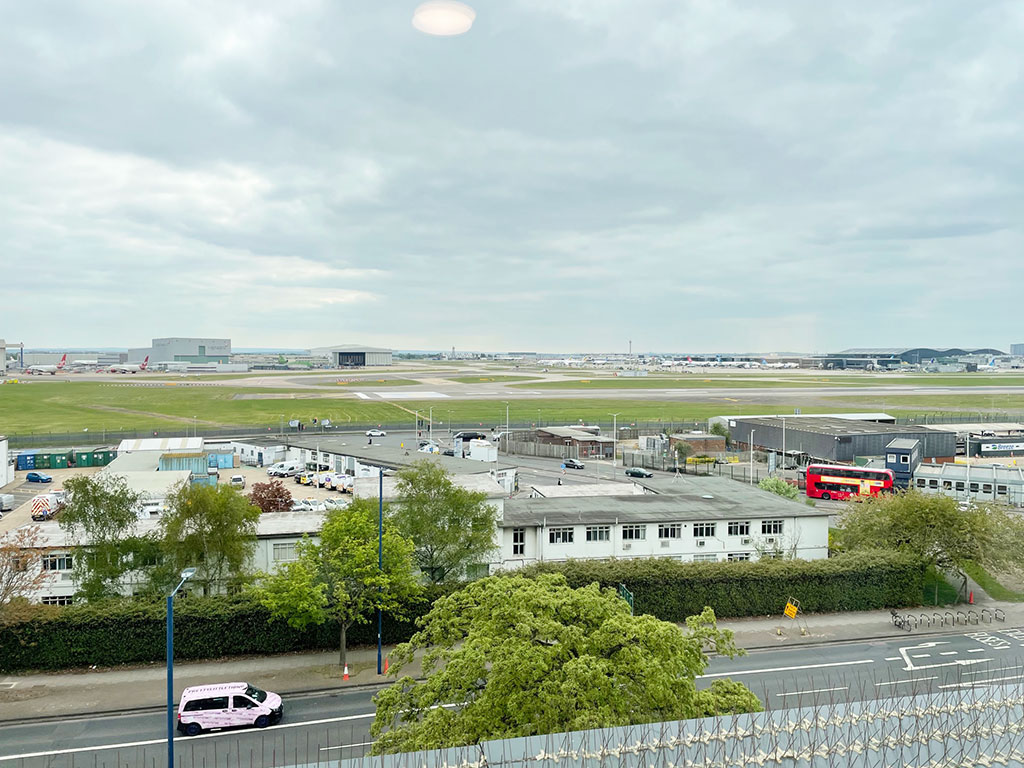 View of the 27R threshold from the corridor windows. 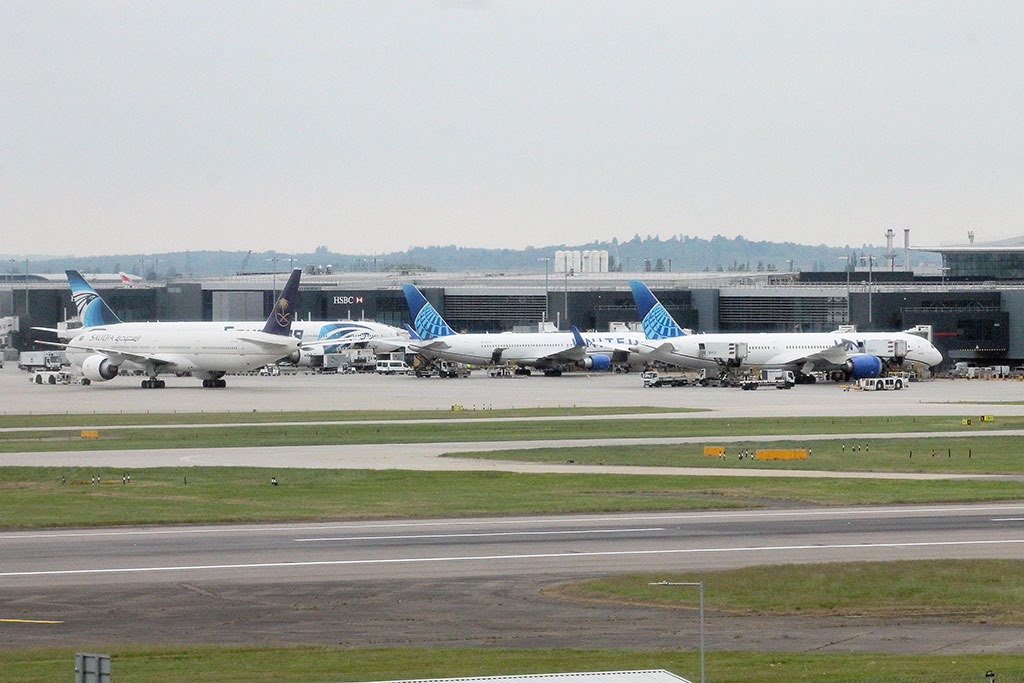 View of Terminal 2 from my room. 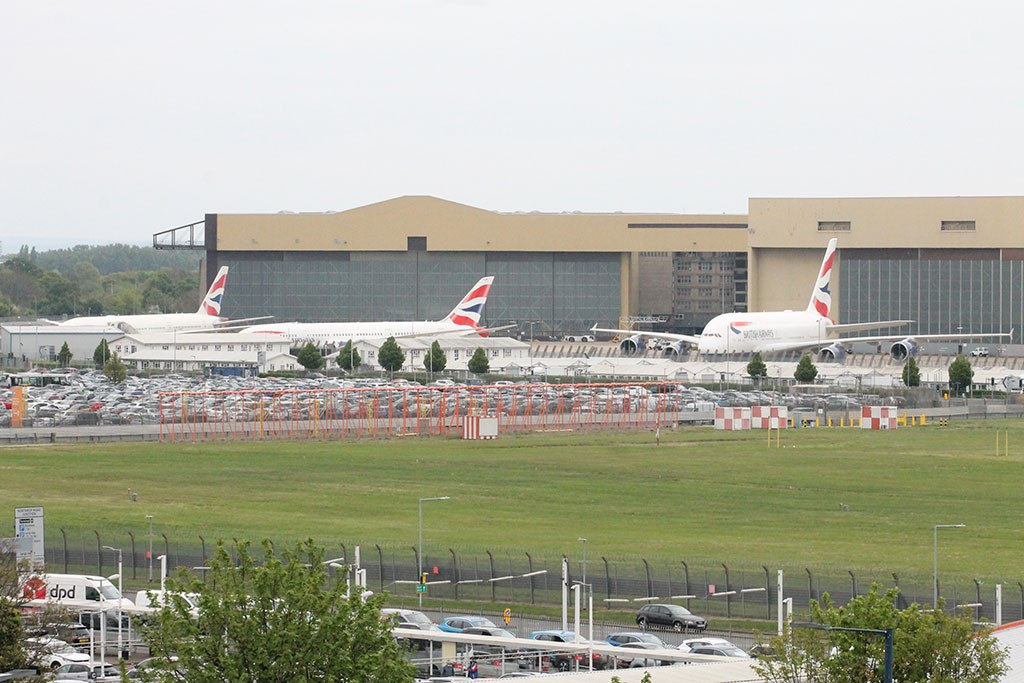 View of the BA Maintenance Base from the corridors.

When booking, there is the option to request an Airport View room, which I did. Upon checking in, I queried whether this had been processed, and was told “Yes, but airport views are only partial”. Ah, well I guess we’ll see what is on offer.

After ascending to my floor in the lift, the doors opened to a wide vista through large windows, looking onto the maintenance base, with some aircraft parked outside. There were a couple of chairs positioned next to the window, which was a nice touch.

My room was close to the lift, and it faced west. A quick open of the blinds revealed much of Heathrow airport off to the left, with the Ariel hotel in front of and below me. 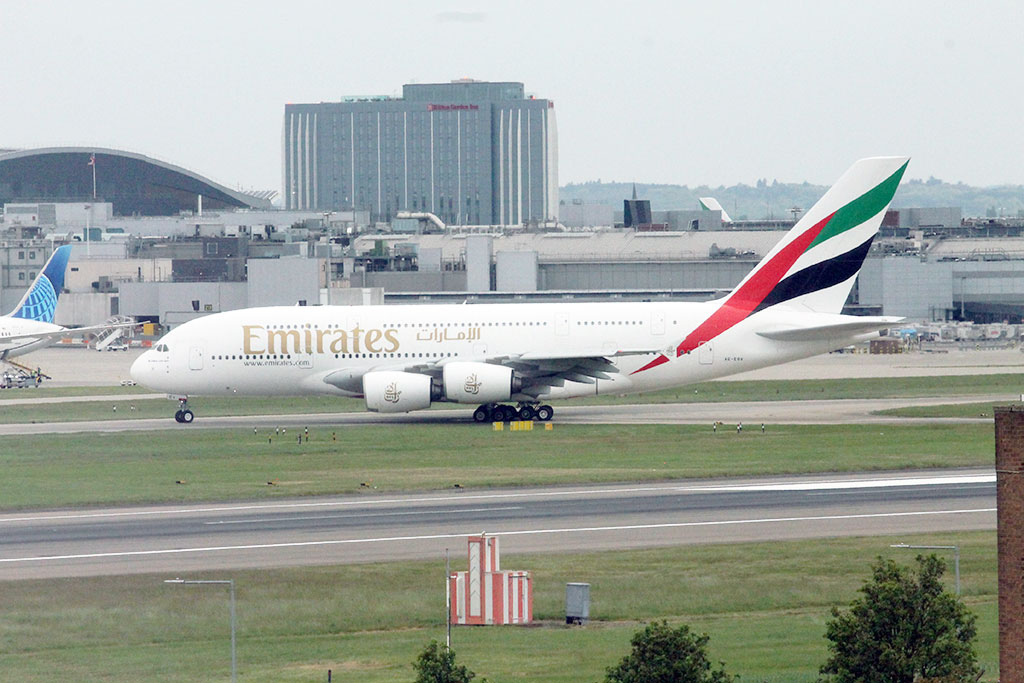 Emirates A380 seen from my room.

This wasn’t such an issue. I could certainly see all movements. But much of the runways were obscured, and any photographs needed a 300mm+ lens and were at an angle through two panes of glass (which kept the noise to a minimum).

It is possible to log all movements on runway 09L/27R and around the Terminal 2 area with good binoculars, and you can use flight tracking apps like FlightRadar24 to monitor all movements. 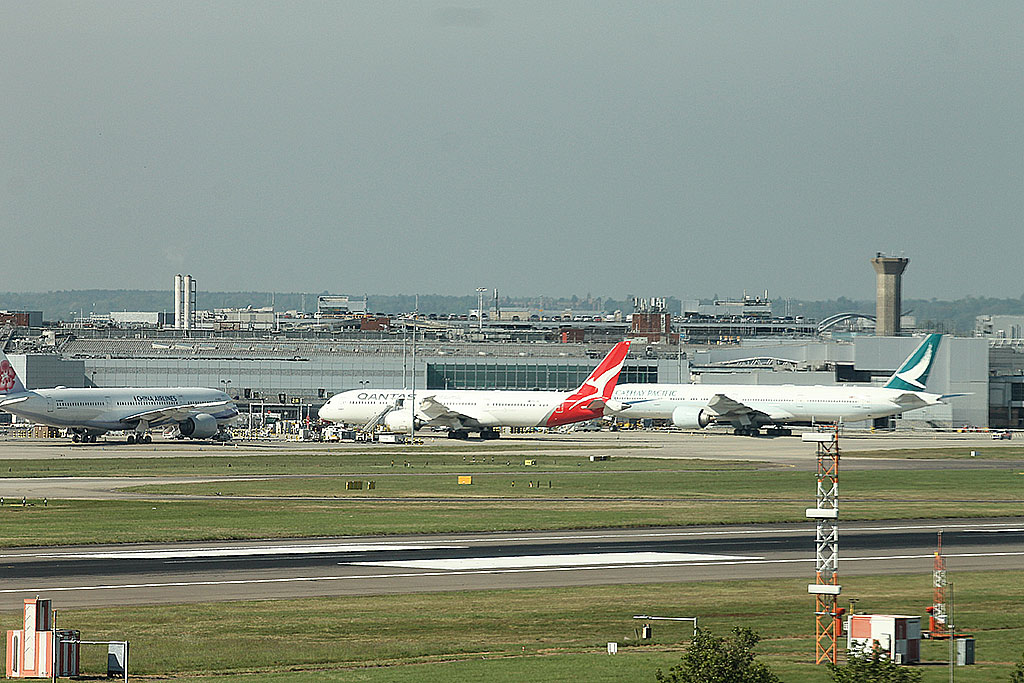 I ventured out to explore, and found that at the end of the corridor there was a window with a grandstand view over the threshold of 27R, with aircraft below you as they landed (which wasn’t happening during my stay due to 09L being in use). 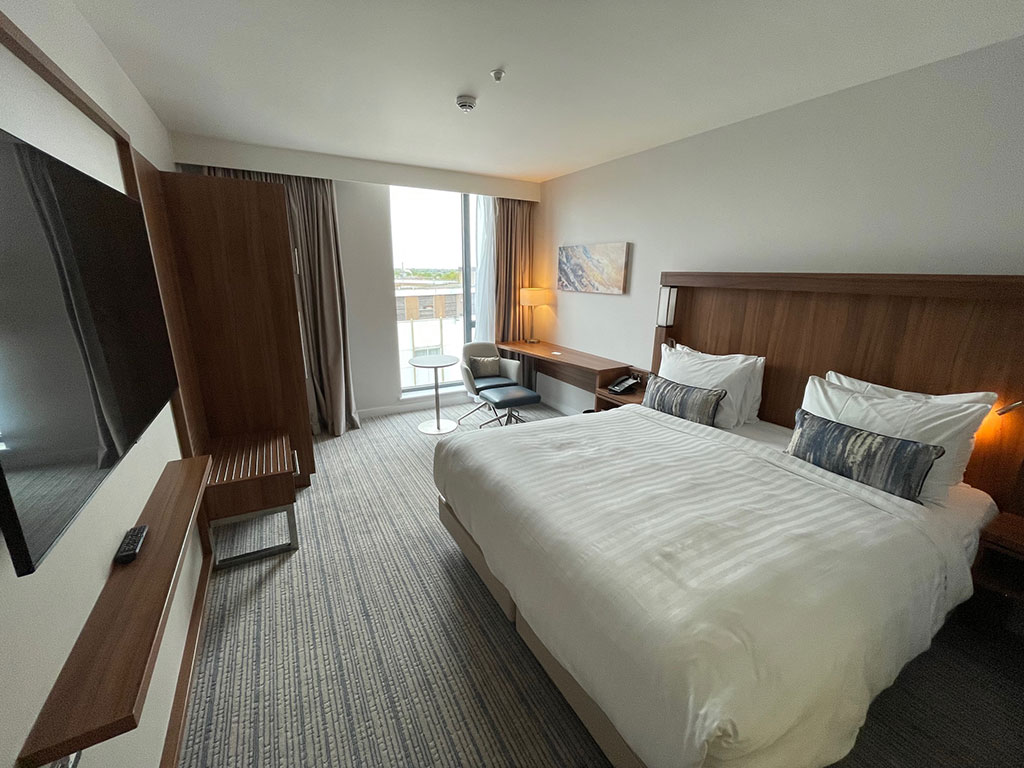 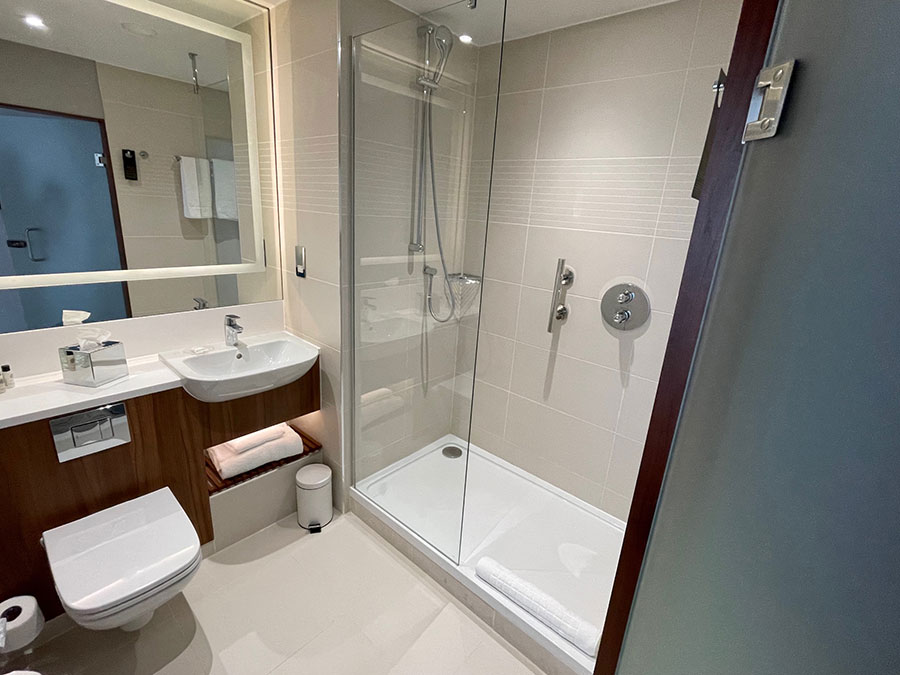 The room was perfectly adequate, with a large, comfy bed and modern, clean bathroom with walk-in shower.

There were plenty of charging sockets, plus a large TV.

WiFi was free and fast, and there was a desk alongside the window to work at, and a comfy arm chair to position by the window.

Tea and coffee facilities were available in the room. 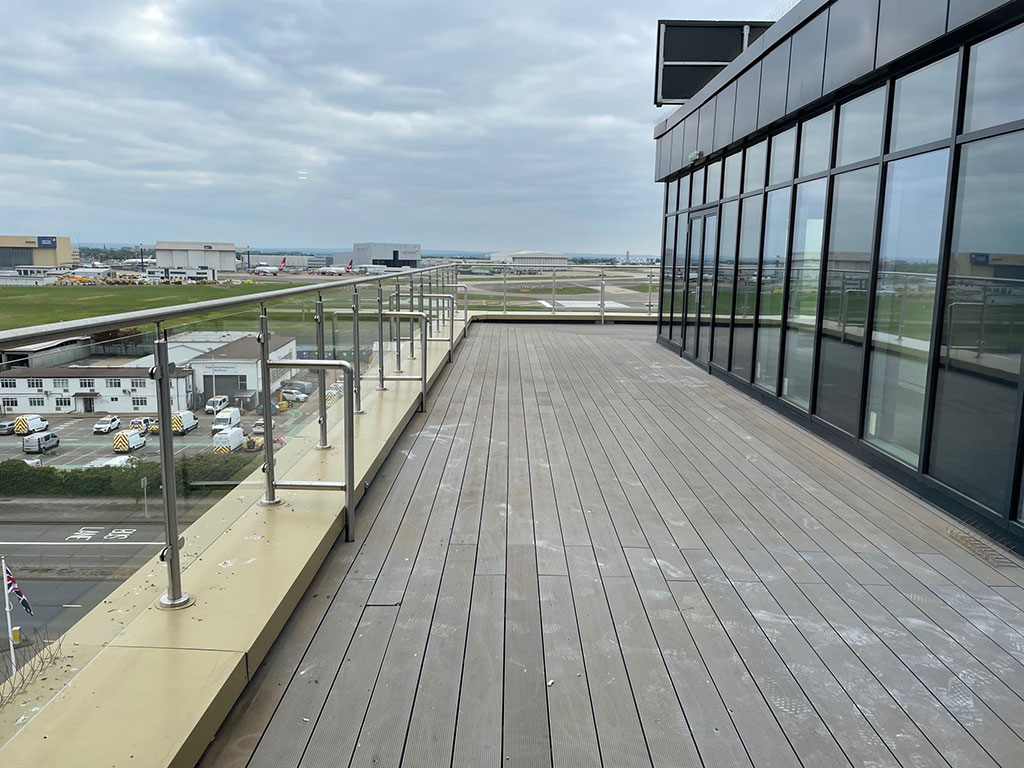 On the sixth floor of the hotel is the Sky Bar and the open air terrace.

This is open from 5pm till midnight, and offers the best views, again overlooking the threshold of 27R with the airport’s east end spread out beyond.

To use the Sky Bar you would be expected to make purchases of food or drink.

Photography and spotting is similar to the corridor windows, but without the restrictions of glass.

Getting There and Booking 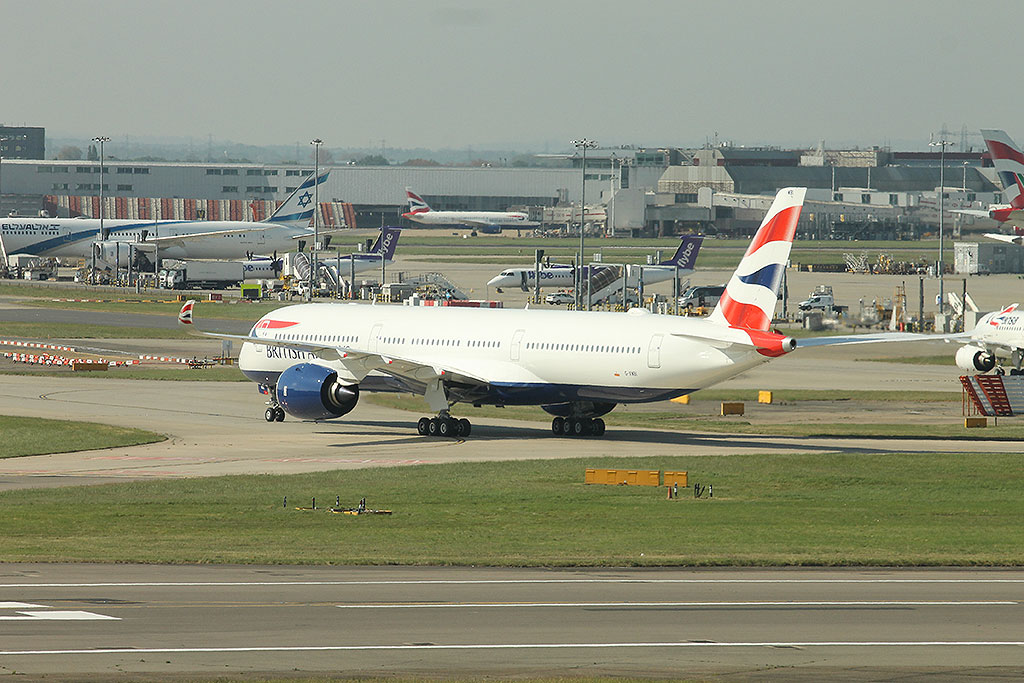 The Courtyard by Marriott London Heathrow is located at Nobel Dr, Harlington, Hayes UB3 5EY (but essentially on Bath Road).

There is a bus stop outside which is useful for connecting to Heathrow’s terminals (there’s no airport shuttle), or into Hounslow where you can catch the Underground into London itself.

You can book your room at this link: https://www.marriott.co.uk/hotels/travel/lhrcy-courtyard-london-heathrow-airport/ 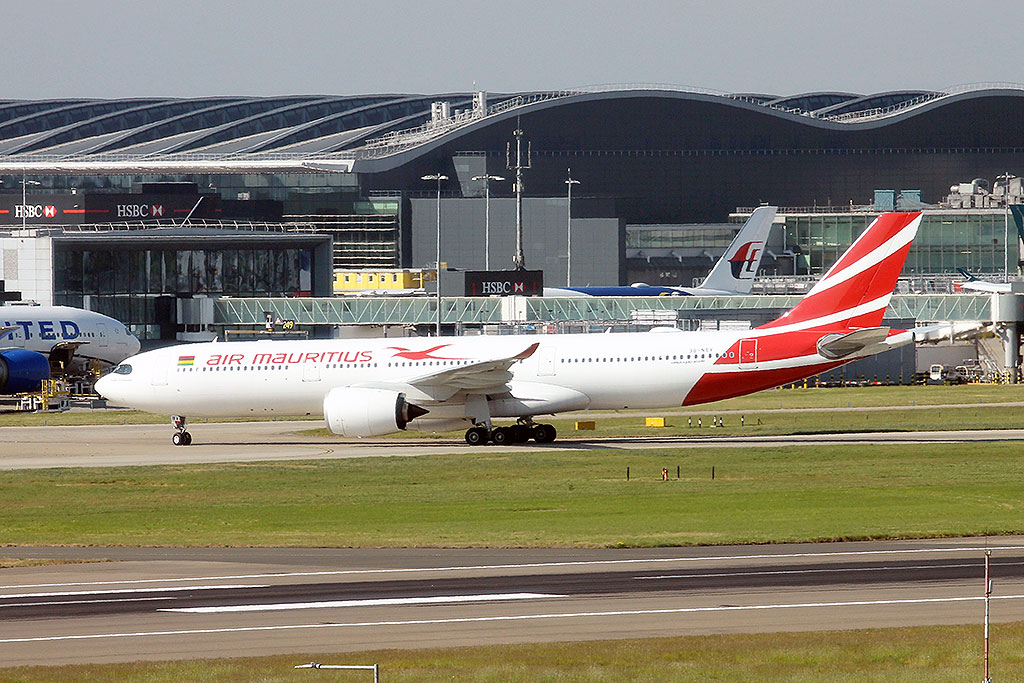 Air Mauritius A330neo from my room.

While the Renaissance and the Premier Inn Terminal 4 are still the best spotting hotels at London Heathrow, this is a close contender thanks to its proximity to the airport.

Its rooms are smart and clean, and has all the amenities you could want.

However, the rooms are all at an angle to the airport, so you may need to use the windows in the corridors or the Sky Bar for the best views.

The best photography also relies on the airport using runway 27R for landings or departures, which will bring aircraft close to the hotel.

For those happy to simply log movements, you won’t miss anything from an “airport view” room. 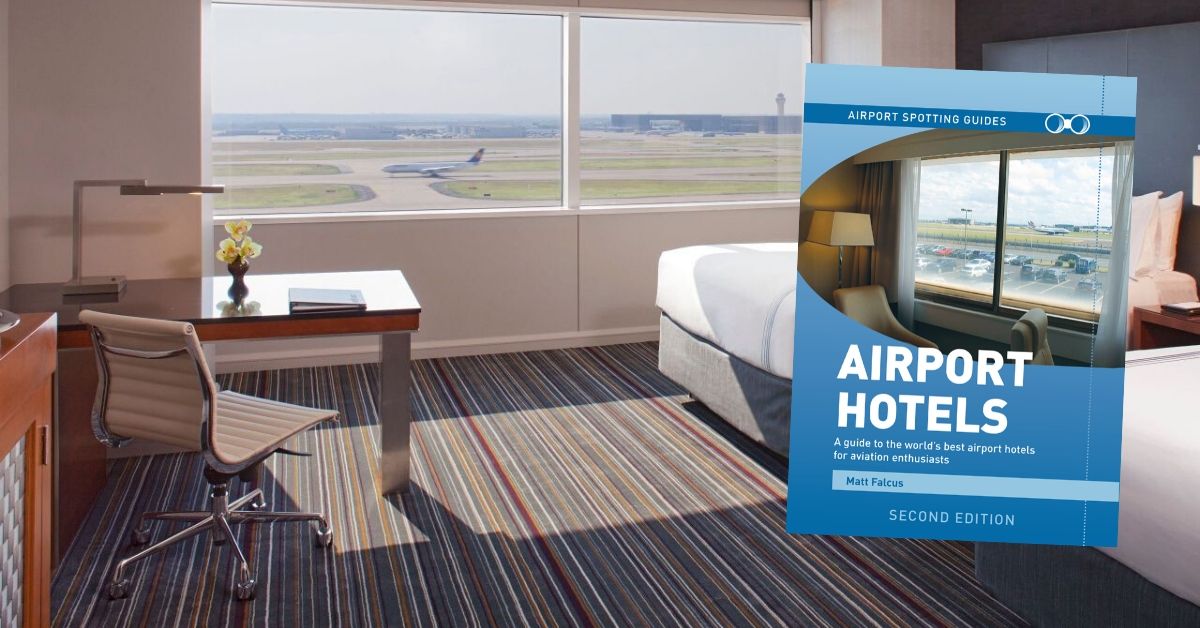 Our book, Airport Spotting Hotels, details hundreds of hotels at or near airports around the world which have views of aircraft movements. Discover what the views are like, the best rooms where known, and advice on whether photography is possible. Includes contact details, website and address for each hotel.

Rooms look nice, but I wouldn’t bother paying extra for an airport view after your comments Matt. Like you I think the Premier Inn T4 is one of the best but am attracted to this one for the different angle of shot it offers. Looking at the terrace are there any chairs up there? Something a geriatric like me would need but at least the opening hours seem OK. Also having a bus pass will be a help as I suspect food in there could be pricey, but I’m prepared to give it a whirl. Thanks for the review

Hi Alan, there are chairs on the terrace outside the SkyBar, but it’s only open later in the day.

Matt and Alan, I was advised… that the bar and snack bar on the rooftop terrace open at Noon.

Gentlemen, FYI, another spotting buddy gave me the details of the (small) portable chair he used. (I later ordered the same type as his.) Simply SEARCH Amazon – for “Portable Camping Chairs” and you’ll see a variety of options. Upon your request, I can send you a link to the chair I’ve bought. It remains available at Amazon. The AvGeek who supplied the details of his chair is a burly dude weighting about 250 pounds. He told me he’s quite satisfied with his chair.

Matt, here’s a quote from Mr. Azam, the GM of this property. It’s his response to my inquiry about the hours of the rooftop terrace:

Please confirm that your roof top WILL BE ACCESSIBLE starting in March.

He hater confirmed to me that the year he intended to specify is 2022.

Thanks for the info Joseph!
Matt