Syed Hassaan Khalid begins a new series of articles looking at the world’s most notable aviation disasters and incidents. Here, episode 1 looks at the Tenerife Airport Disaster of 1977.

On 27th March 1977, a fine day at Tenerife Los Rodeos Airport on the Spanish Canary Island, located southwest of mainland Spain. Pan Am flight 1736, operated by Boeing 747-100 N736PA, is bound towards nearby Gran Canaria airport with 380 passengers and 13 crew members. The cockpit crew is told that the airport is closed to all traffic due to multiple bomb threats at the terminal. Therefore, traffic is being diverted to Tenerife, despite the insistence of the Pan Am pilots that they would be able continue the holding pattern for two more hours until runway is available. 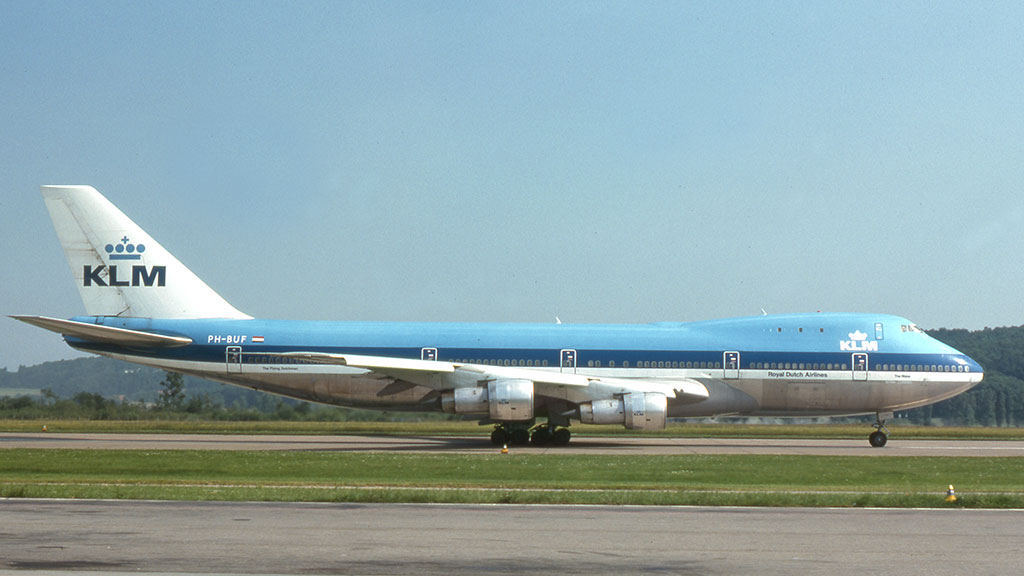 PH-BUF, the KLM aircraft involved in the accident.

Similarly, KLM’s flight 4805 operated by 747-200 PH-BUF is bound for Gran Canaria from Amsterdam carrying 249 souls onboard. The captain of this aircraft, Veldhuyzen van Zanten, is the chief flight instructor of KLM with 11,700 flight hours including 1,545 hours on the 747.

Both aircraft had a short stay at Tenerife and as soon as the threat was over, Pan Am was ready to depart for Gran Canaria but was unable to continue its taxi as the KLM aircraft had blocked access to the runway owing to the shortage of parking space since the airport was already at full capacity.

The KLM crew decided to fully refuel the aircraft at this airport for return leg of the flight rather than scheduled refueling at Gran Canaria. The refueling took around 35 min and then both aircraft were able to continue towards the only runway of the airport.

One passenger of the KLM flight decided to discontinue to Gran Canaria as his house was on Tenerife Island, leaving behind 248 passengers that were to land at Gran Canaria airport.

At around 4:58pm, KLM 4805 was instructed to taxi via the runway as the main taxiway was blocked by parked aircraft. This type of taxiing is called “Backtaxiing”. In this process the aircraft have to taxi to the end of runway and then perform a 180° turn for takeoff. The ATC controller asked to crew to report when it was ready and positioned to takeoff.

Soon after the taxi clearance to KLM, the Pan Am flight was told to follow the KLM aircraft and taxi in the same direction on the runway, but turn left at the third exit onto a taxiway and continue to taxi parallel to the runway until the holding point. The weather conditions were not good, as fog had decreased the visibility significantly.

The KLM plane reached the runway threshold and made the turn to position for takeoff. Meanwhile, the Pan Am crew’s attention was towards runway exits as they were trying to identify the third exit. They called out the first two exits but were unable to spot the third due to poor visibility and inadvertently continued towards the fourth exit.

As they missed the assigned exit and were continuing towards next, the KLM started its takeoff roll. The KLM first officer expressed his concern to the captain that they were not cleared for takeoff. The captain responded “Yes, I know that… Go ahead and ask”. The first officer declared that they were ready and waiting for clearance. The tower responded by giving them instruction of departure procedure but did “not” include that they were cleared for takeoff. The first officer replied that they are at takeoff roll now, for which the ATC controller stated “O.K” which is an unprofessional term in aviation commands.

Due to high level of fog, the pilots were unable to spot each other’s aircraft. As KLM was thrusting down the runway, Pan Am was trying to locate the runway exit. The crew of both planes were totally unaware that actually they were both nose-facing and the distance closing-in. The airport’s tower was not equipped with ground radar and the fog meant the ATC controller could not spot these aircraft visually.

Suddenly, the Pan Am crew noticed the landing lights of the gigantic 747 as they approached the fourth exit, leading to a state of utter chaos. The captain of flight 1736 engaged full throttle and tried to steer the aircraft towards the left into the grass. Meanwhile, the captain Veldhuyzen of KLM’s 747 pulls the yoke to lift off at approximately 140kts (260km/hr.) to avoid a collision.

The nose wheel of the KLM aircraft passed just above the fuselage of Pan Am, but the left engine and the lower fuselage, along with main landing gear struck the upper right side of the fuselage. The collision was so severe that it ruptured its skin right away.

Although, the KLM managed to liftoff, after a powerful collision it couldn’t continue for more than 150m and suffered a stall, bringing the aircraft back to the ground with loud bang, and eventually both aircraft were covered in flames.

The firefighters located the aircraft through dense fog and started to look for survivors while trying to cool-off the fire. All 248 souls onboard KLM’s flight died but 61 passengers on the Pan Am flight survived along with the flight engineer, and both the pilots. 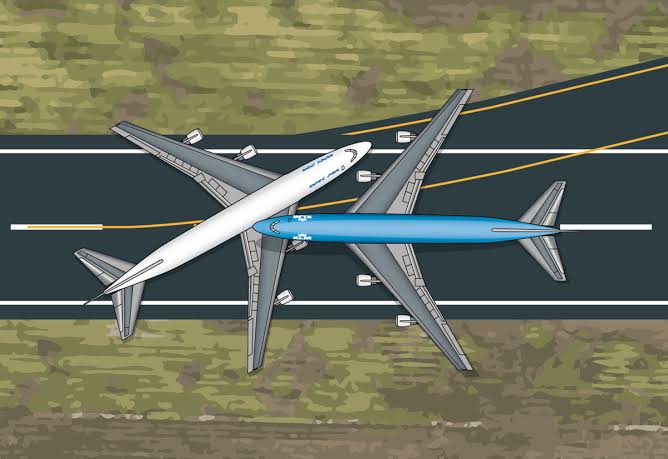 This crash was the largest fatal air disaster of commercial aviation. It went into the news headlines worldwide as 747 had a good reputation. Not just that, but actually it involved two leading airlines which many people had trust in. Therefore, everyone raised eyebrows on how this terrific crash at Tenerife happened.

Since the airport’s only runway was blocked due to the debris, A USAF C-130 landed on the taxiway to evacuate the survivors to Las Palmas island for treatment. The Investigation was then conducted by “Comisión de investigación de Accidentes e incidentes de aviación civil”. The assigned team of 70 investigators of this crash included aviation analysts and investigators from the USA and Netherlands, including some selected personnel from both of the airlines that were involved in the crash.

It was surprising that there were multiple reasons for the crash. The investigators examined the incident from every angle and interviewed many people including airport staff, the survivors, and ATC. After completing their investigations, they made a report which cleared all the questions raised.

The report indicated that main cause of this accident was the ill-judged decision of captain Veldhuyzen of KLM flight 4805 to take off without proper clearance from ATC. The air traffic controller only gave instruction for route clearance and departure procedure, but the captain initiated the takeoff without giving it a second thought. The flight officer did raise suspicion but did not ask the captain to abort takeoff. As the captain of KLM’s flight 4805 was one of the most experienced and senior pilots in the company, the flight officer did not challenge the captain’s decision neither suggested captain to wait for proper takeoff clearance.

If we see it from other perspectives, we may notice that the Pan Am flight was directed to exit the runway at the third point, but neither the captain nor the flight officer saw this exit and eventually proceeded to the fourth exit, which extended its presence on the runway. If they had taken assigned exit, they might have avoided this collision.

We also conclude that if the ATC had proper equipment and radar system, regardless of the fog, they could have halted one of the aircraft until other had left the ground, or warned the KLM to hold its position till Pan Am reported to have cleared the runway.

After this dreadful incident, strictness was enforced in rules and regulations. ICAO and other aviation authorities emphasized and focused on making English the standard language for communications between ATC and pilots, as well as making new phraseology in which the pilot has to read back instructions to ATC, and not respond with just “O.K” or “Roger”. The authorities also recommended junior-ranked pilots to question the captain or senior-ranked pilot, if they had any objection or doubt with their decision.

This incident definitely jolted the entire aviation industry. The concerned airlines offered compensation to the affected families and also a memorial was made at Amsterdam’s Westgaarde cemetery which is the burial place of KLM’s passengers.

In 2007, a memorial was set up on Tenerife to mark the 30th  anniversary of the crash.

The year after the crash, a new airport was opened at Tenerife, named Tenerife South Airport, which handles most of the international traffic to the island today and the old Los Rodeos airport was provided with ground radar system for better monitoring of flights so that this type of incident can be avoided in future.