Syed Hassaan Khalid continues his series of articles looking at the world’s most notable aviation disasters and incidents.

Read Episode 1 looking at the Tenerife Airport Disaster of 1977. 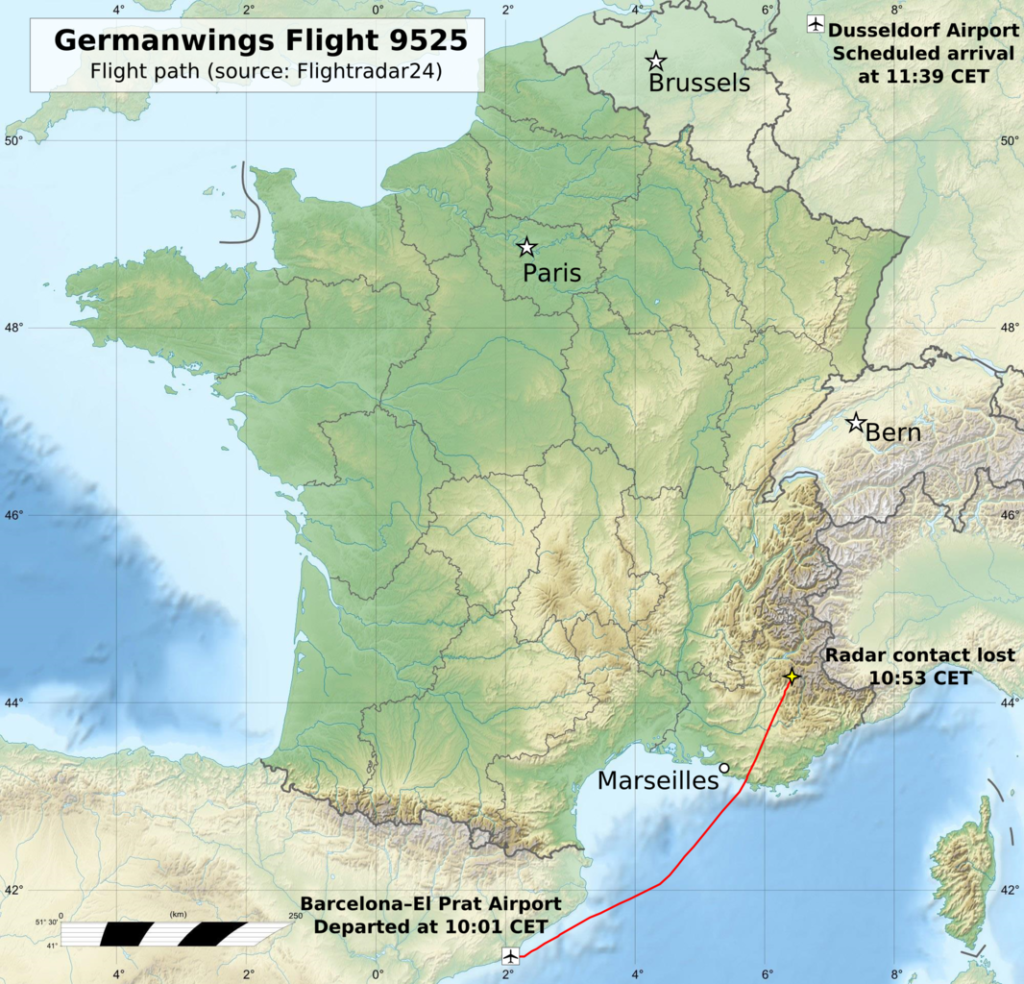 A routine commercial flight from Barcelona to Dusseldorf, just like several other flights, is at cruise altitude when suddenly the autopilot disconnects and aircraft begins a rapid descend towards the Alps. In a matter of minutes, the aircraft is in flames. There was no sign of turbulence or malfunction, so what went wrong to cause the aircraft to suddenly lose altitude and slam into mountains without any emergency being declared by the pilots? Let’s find out in this episode! 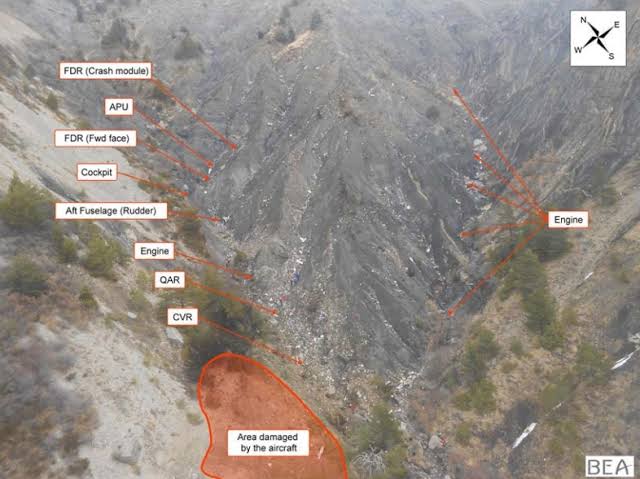 It’s early morning at Barcelona-El Prat airport. A regular flight arrives from the German city of Dusseldorf as 4U-9524 which is operated by Germanwings.

After the passengers have boarded for the return flight, the captain, 34-year-old Patrick Sondenheimer, who has around 4,000 hours on the Airbus A320, starts the checklist and signals ready for departure. He is accompanied by 27-year-old Andreas Lubitz, with 540 hours on this type.

On the return leg of the flight, the co-pilot is the Pilot Flying (P.F). The flight left for Dusseldorf with a delay of over 20 minutes. The plane flies north east over the Mediterranean Sea and approaches its cruising altitude of 38,000ft (FL380) as per the flight plan. A buzzer rings as someone requests access to the cockpit, and the pilot opens the door. A flight attendant enters the cockpit and the pilots discuss how the stop at Barcelona went as they experienced a slight delay on departure.

The flight attendant leaves the cockpit after a few minutes, but the pilots continue their discussion about managing the delay until they finally reached their cruising altitude of 38,000ft and are directed by Marseille Control to transfer to radio frequency 127.180 MHz as they cross over the French coast. Meanwhile, the captain tells the flight officer that he has to leave the cockpit for a while and asks him to take over the controls.

As soon as the captain left the cockpit, the assigned altitude was changed from 38,000ft to 100ft in a second and the throttle was set to IDLE. The aircraft started descending. The speed of descent varied from 1,700 ft/min to 5,000 ft/min.

The captain realizes the sensitivity of the situation and tries to break into the cockpit by using the axe onboard the aircraft, but since the 9/11 incident, cockpit doors have been made extra durable to avoid any breaching into the cockpit in an attempt to hijack; therefore, the axe simply wasn’t enough to break the door.

The aircraft continued its rapid descent without any hindrance and the audible ground proximity callouts are heard. Finally, the plane hits the mountain at 10:41 a.m. CET and the debris gets scattered over a wide area. After the last radar contact with the flight at 6,100ft, a French Air Force’s Mirage fighter jet was scrambled towards the last known location of Germanwings 9525 but it was without success as the aircraft had already crashed.

All the 150 souls onboard perished, including 144 passengers and six crew. This was the third-deadliest air disaster in French aviation history.

Soon, the news hit the headlines, with a baffled response since there was no sign or threat of terrorism onboard nor any May Day call by the flight crew. Without any malfunctioning or distress signal, a highly advanced aircraft with state-of-the-art technology, went down in a matter of minutes, in the country where the head office of the Airbus is stationed. Therefore, a thorough and critical investigation was needed to understand the mystery behind the final moments of flight 9525. 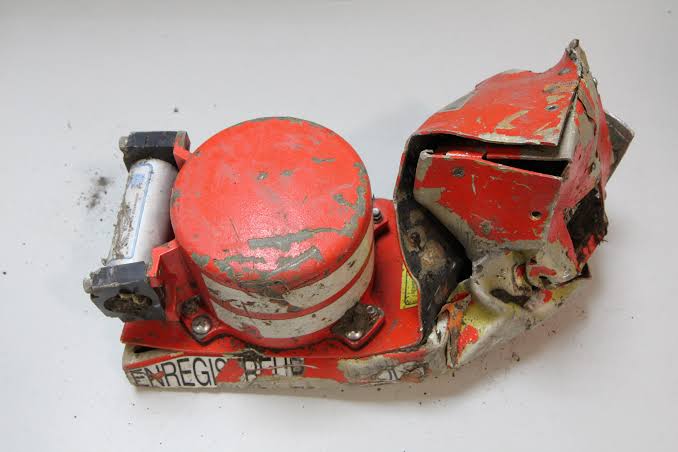 The responsibility of investigating this tragic accident was taken by BEA (Bureau of Enquiry and Analysis for Civil Aviation Safety). The wreckage was spread over a wide area which clearly indicates the aircraft was at a high speed before impacting the terrain. Fortunately, the Cockpit Voice Recorder (CVR) and the black box were both recovered from the crash site and were sent to the lab for extracting the data.

Upon its decoding and analysis, BEA stated that the co-pilot was the only person in the cockpit and no one had entered or left after the captain had exited the cockpit. The CVR also recorded heavy breathing sounds in the last couple of seconds before the crash, and what concerned BEA the most was the behavior of the flight officer.

It was now making sense that it might have been a case of suicide and the co-pilot might have deliberately caused this accident, but they needed strong evidence to support this statement.

Therefore, the Bureau decided to do an in-depth inspection of the flight officer Andreas Lubitz’s medical history and records. They found out that after clearing his high school, he got admission at the Lufthansa Flight Training institute in Bremen, however, he was dropped just two months later as he was experiencing severe depression which had hindered his training.

After a period of around nine months, he returned back to his pilot training after being deemed fit by his psychiatrist. Later on, he was appointed as a flight attendant for Lufthansa while on the other hand, continued to receive pilot training. He joined the airline Germanwings just a year before the crash.

The investigators made a shocking discovery that Lubitz had to acquire the pilot license from the United States, as he completed his leftover training in Arizona, but was denied due to his psychological condition.

Following the crash his home was searched by the law enforcement agencies and they found a medical slip from his doctor which prescribed him to rest and take leave from work. Although, Lubitz did not mention any health issue to the airline. When the security officials went through his tablet computer, they discovered that he had searched on “ways to commit suicide” and also regarding the lock mechanism of the cockpit door on the Airbus A320, which was his assigned aircraft type.

Additionally, as the BEA inspected the Flight Data Recorder (aka black box) they detected that the flight officer had changed the autopilot dial multiple times to 100ft, while the captain was out of the cockpit on the first leg of the flight, which gives clear evidence that he had already planned to crash the aircraft.

The BEA concluded that this crash was done intentionally by first officer Andreas Lubitz, as he had been experiencing severe psychological disorders and was heavily sleep-deprived, which was affecting his vision, and subsequently resulted in partial loss of his eyesight. If this had worsened, Lubitz’s license would have been revoked and due to the fear of losing his pilot license, leading him finally to decide to commit suicide.

As stated by Lufthansa’s chief executive officer, it was the darkest day in Lufthansa’s history and indeed a black day for the whole aviation industry. Following this incident, The EASA and BEA recommended that pilots should be assessed properly if they were experiencing any sort of psychological issues or were taking any anti-depressant. Lufthansa adopted the new rule which demanded that at least two crew members need to be present in the cockpit at all times during a flight.

Lufthansa provided compensation to the affected families and showed sincere condolences for the loss of 150 lives.