A guide to plane spotting at Edinburgh, by Martyn Cartledge.

Scotland’s capital has an airport that has quite a lot to offer the enthusiast, from a number of different spotting and photographic locations to interesting visitors not generally seen in other parts of the UK. Edinburgh (EDI/EGPH) is situated 5.8 miles / 9.3 km west of the city and is the UK’s sixth busiest airport. 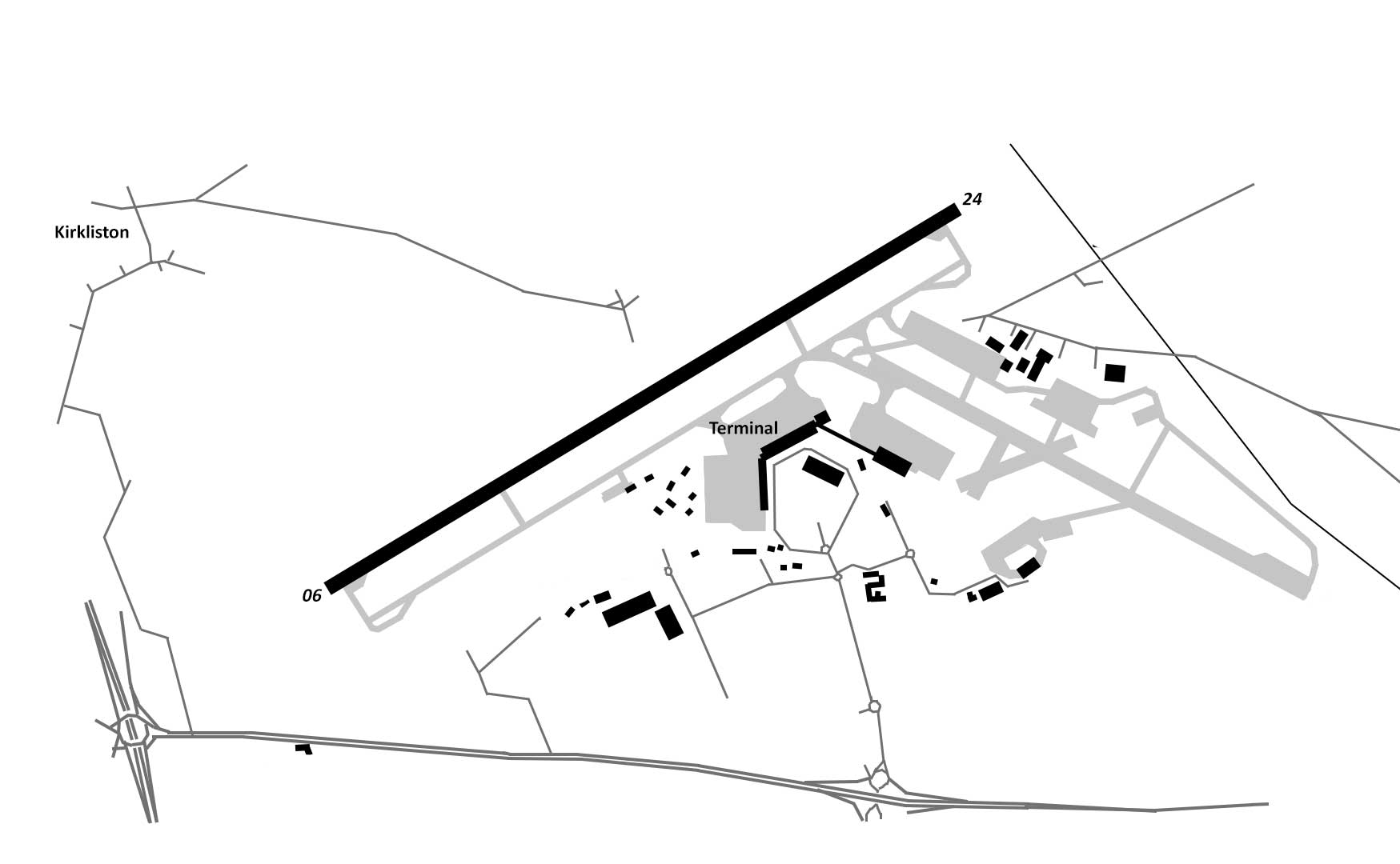 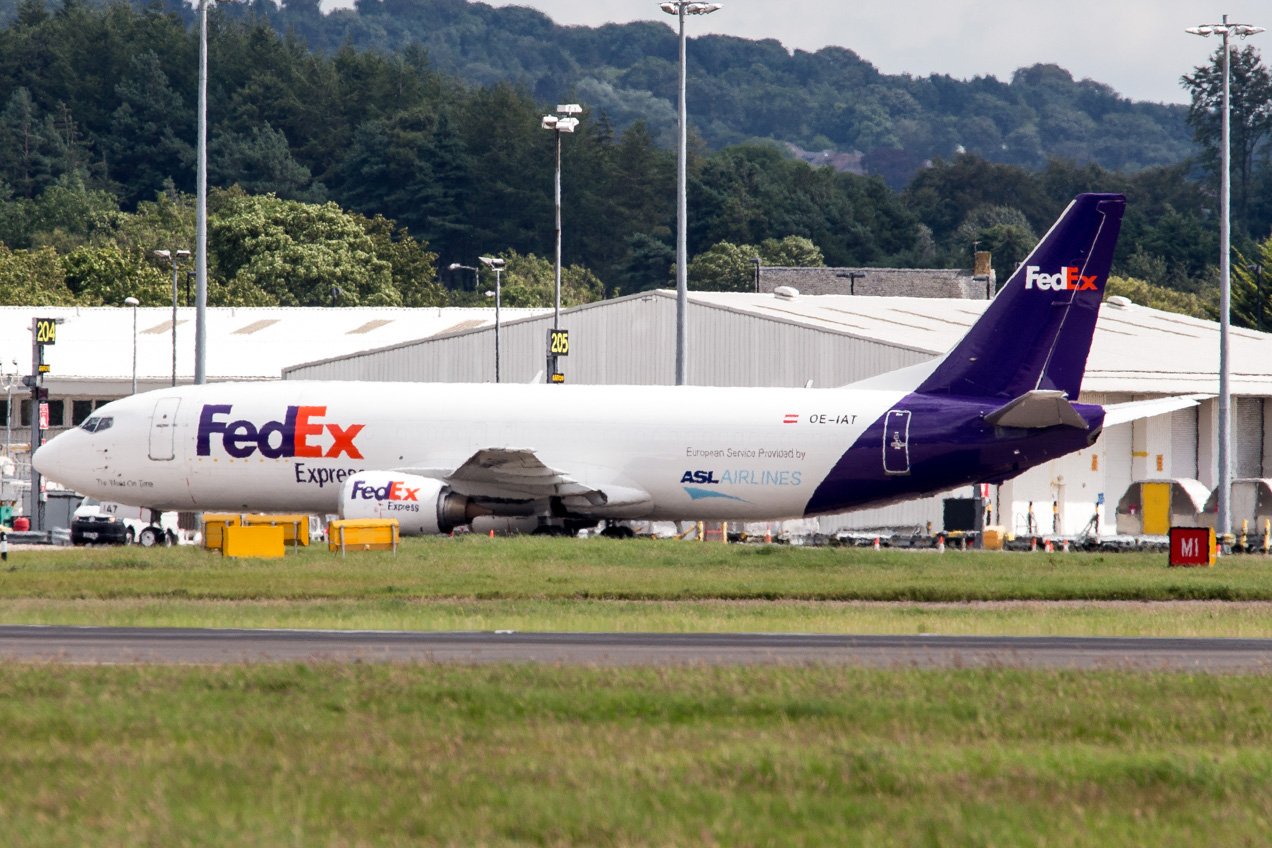 In the airport central area there are a number of places where it is possible to view parked aircraft, be they airliners on the ramp, biz jets or stored aircraft on any of the inner aprons. It is, however, difficult to stop here as with any airport there are restrictions on vehicles stopping and any business parking areas are of course officially just for their staff, and therefore not guaranteed to be available. There is, however, a public car park just across from the terminal from which it is possible to see parts of the passenger ramp, aircraft vacating runway 06 and over to the cargo area and Block 30.

Fortunately there are many other points where the action can be viewed and photographed from without restriction.

West of the Terminal 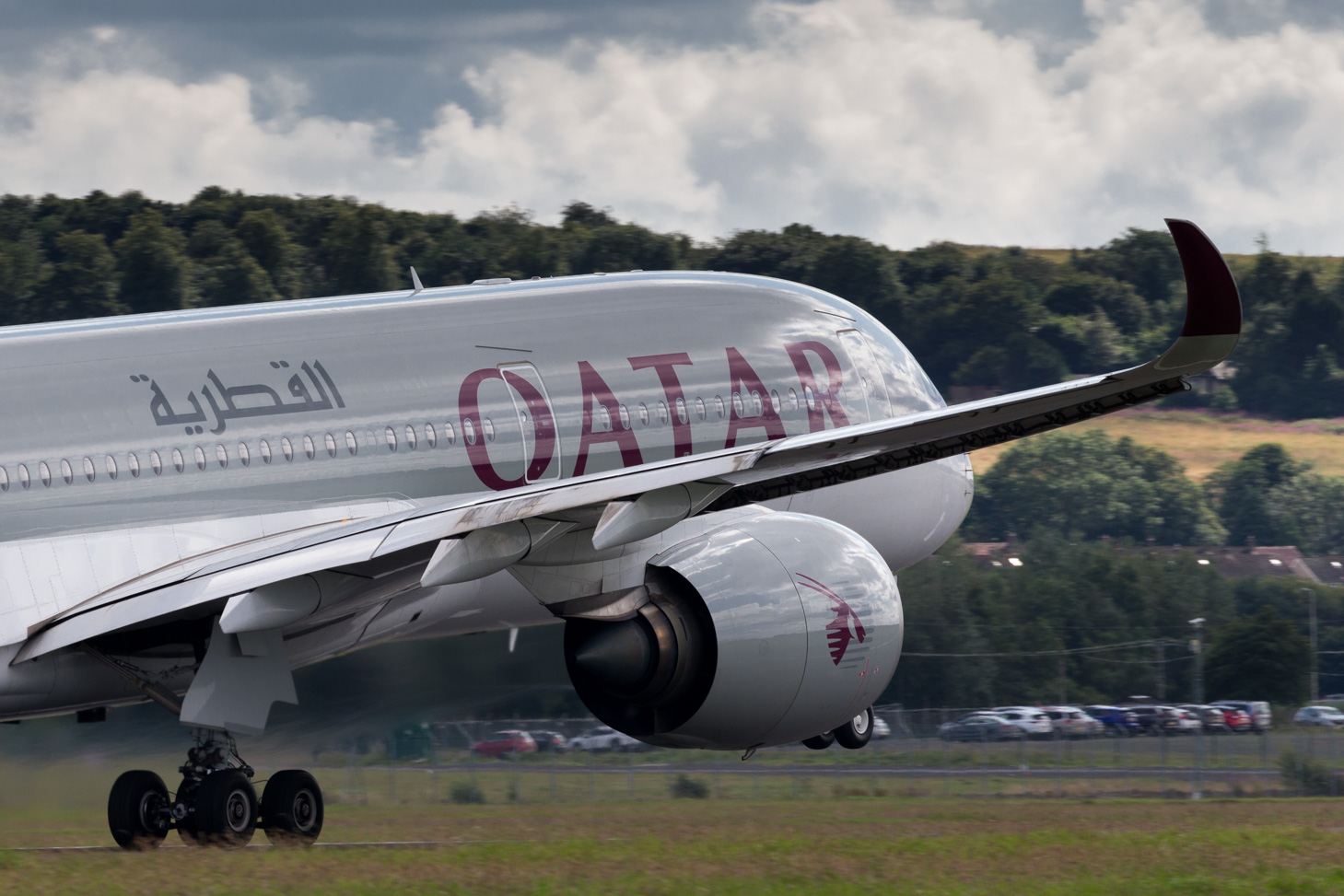 To the west of the terminal area is the Ingliston Markets and Showground area. In this area there is a mound meaning it is possible to photograph aircraft lining up on 06 in addition to those on short finals. As mentioned this is an event show ground so it is wise to check if there is an event on that might increase traffic to the area. Normally access is fine to this area with plenty of space to park. It is also possible to get there by bus from the city centre. Get off at Ratho station and cross the A8 via the footbridge. Since you can see the runway from the footbridge you can either stay there to log arrivals, or get your bearings for the walk if you need to be closer for photographs. Bear in mind that you will only see aircraft that are arriving or departing from here, there are no views over any of the ramps at all.

If you want a better view of more of the airport, or if runway 24 is in use then you have a decision to make and one that involves the weather. 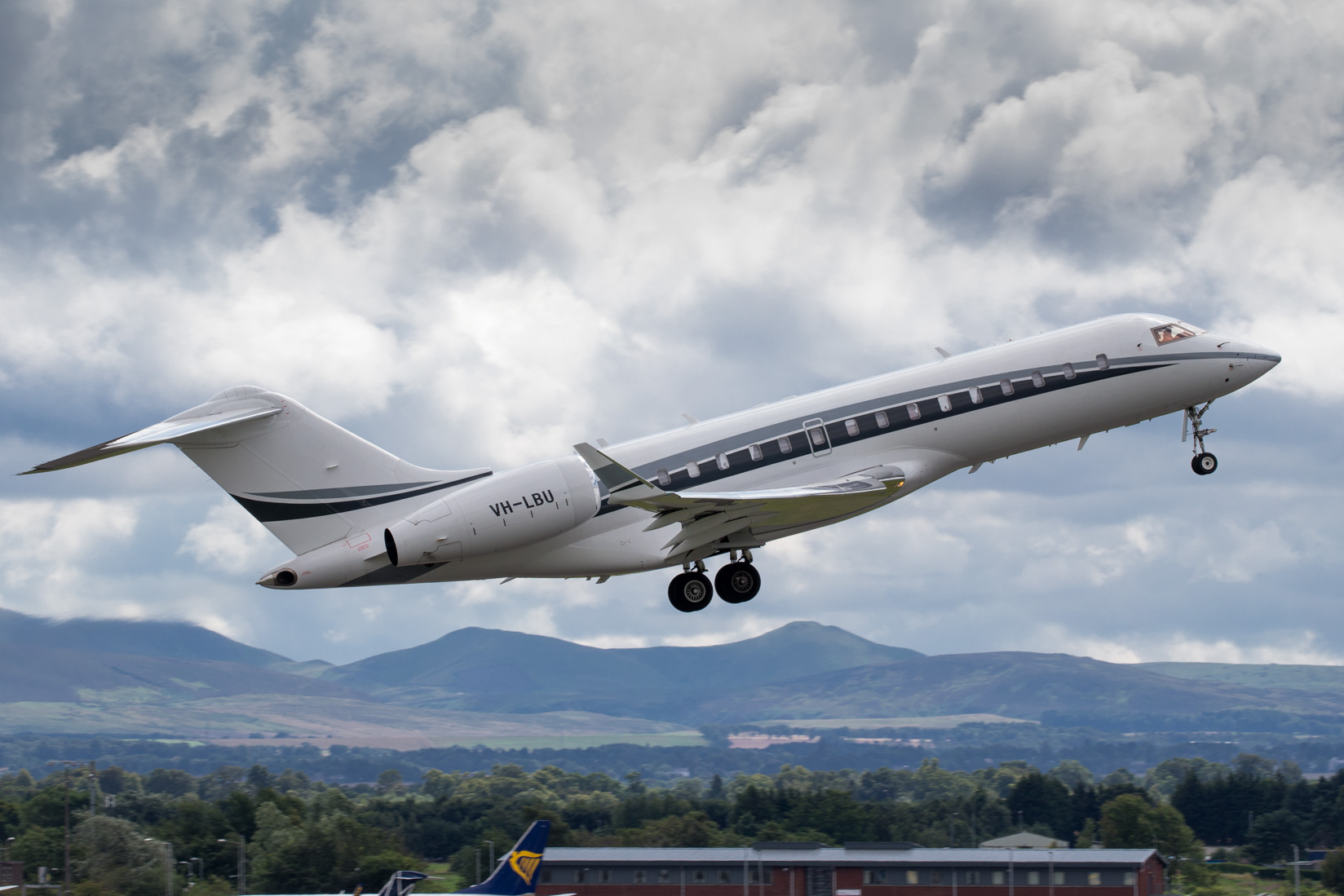 East Side of the Airport

If aircraft are landing on 24 then a good spot to photograph landings is on a road called Lennymuir to the east. The best way to access this area is via the cargo area so it has the added advantage of being able to read off any aircraft there. Although photographic opportunities have rather dwindled in recent times, if you are lucky and anything interesting is parked in the right place a shot through the fence might be possible if you are quick.

To get there, from the airport you need to initially take the main road towards Edinburgh and shortly after the main roundabout where the Edinburgh City bypass (the A720) starts there is a left turn opposite a small retail park before the Shell garage, with signposts to the Cargo area. Just before you arrive at the crash gate, once inside the cargo area, there is a right turn, this is Lennymuir. Find yourself a preferred spot anywhere along this road as landing aircraft essentially run parallel to it.

With this being on the southern side of the runway it does lend itself very well to photographs right up to mid-afternoon, but only arrivals on 24. If your preference is aircraft on short finals and you wish to continue into the late afternoon and early evening, then you will need to leave your car and walk.

Once over the railway bridge take a left onto a track and follow it under the landing lights, taking the first left turn available, before you get wet in the River Almond, back under the railway working your way back to the airport’s perimeter fence and positioning yourself accordingly near the threshold. Line-ups need to be photographed through the fence. 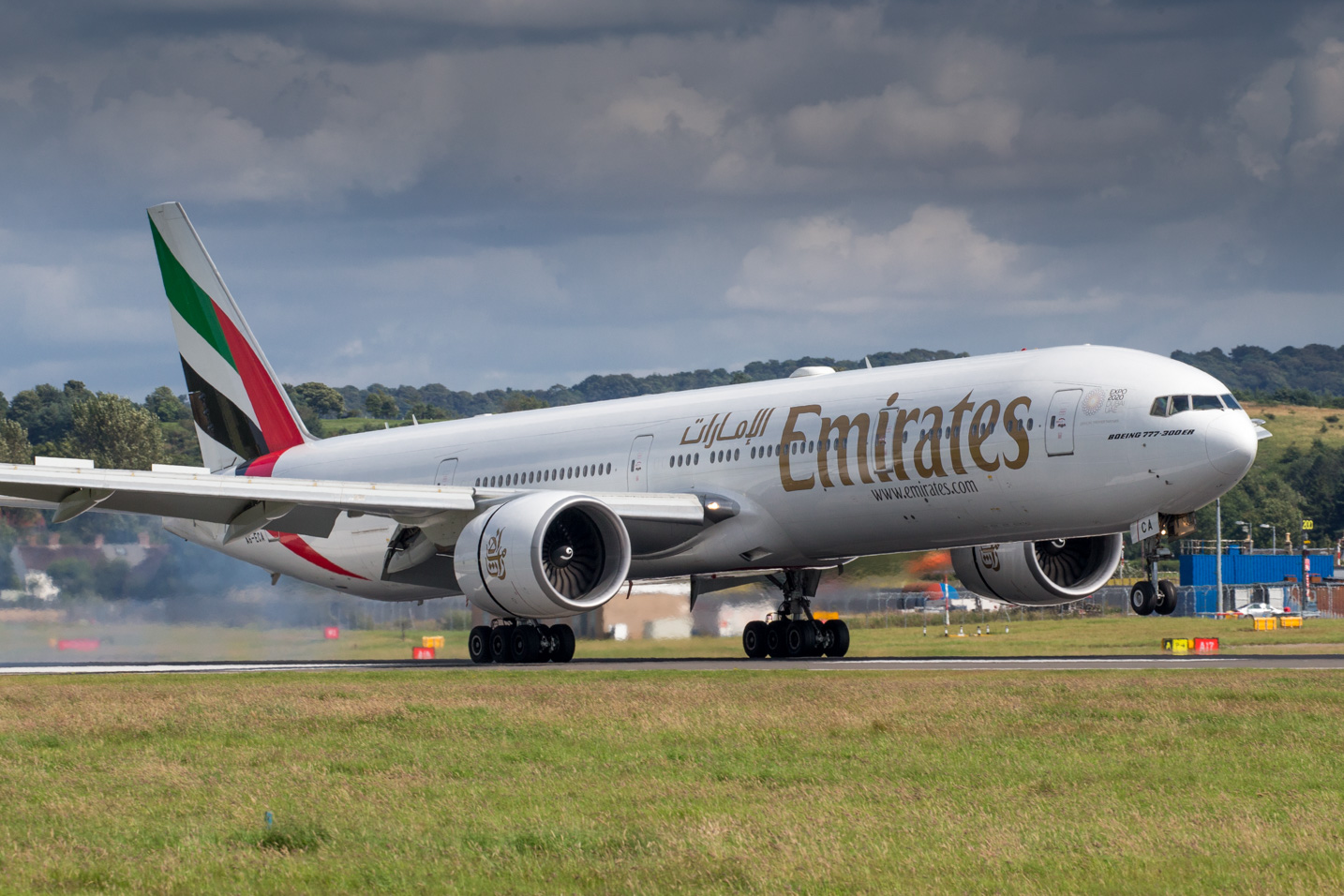 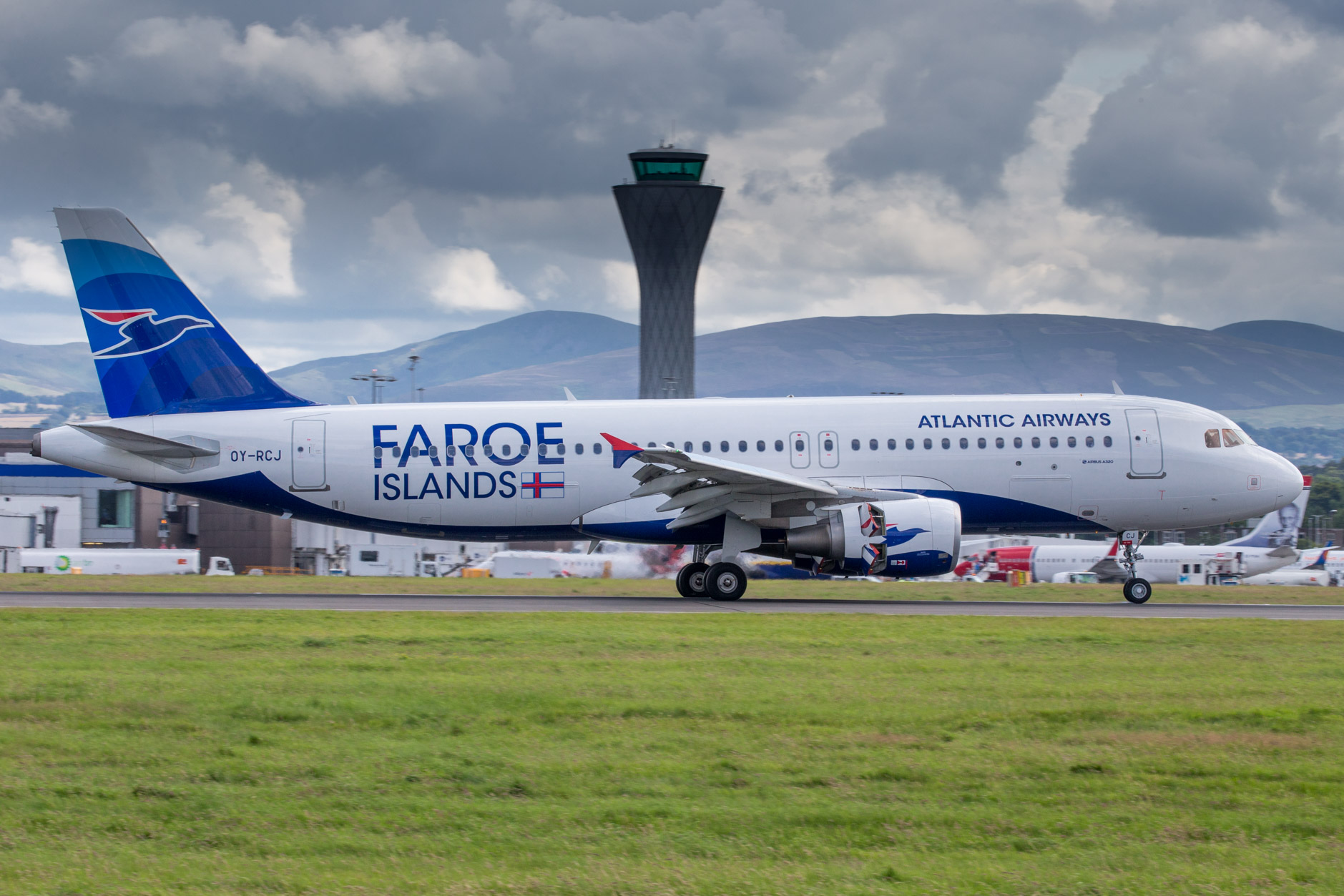 Possibly the best all round place on a sunny afternoon is an area situated about a third of the way down runway 24, directly opposite the terminal building. Aircraft using either end of the runway will be visible from here and both landing/line-ups (on 24) and takeoff (on 06) shots, plus taxying shots for either end are easily had from here. With it being northside the sun will not be in an idea position until late afternoon. There is parking available in the vicinity. If you want photos taken from above the fence it will require a short walk to the raised area a little further towards the 24 threshold.

Views over a considerable amount of the airfield are possible from here and very little will be missed. In fact, combining a stop here with a drive through of the airports central area will mean close to 100% viewed will be possible.

One downside is that it really does require your own transport of some sort or a lengthy walk from Kirkliston as it is not on any public transport routes. To find it the best way is to navigate to the village of Kirkliston via the B800 or B9080 depending on which way you are coming from. Once in the village take the easterly direction from the crossroads in the centre and keep going until Carlowrie Castle is on your left at a sort of expanded roundabout where you will need to take a right on a small bridge over the river. The crash gate is just a few meters on from there so find a parking space ensuring you do not block this entrance.

What You’ll See at Edinburgh Airport 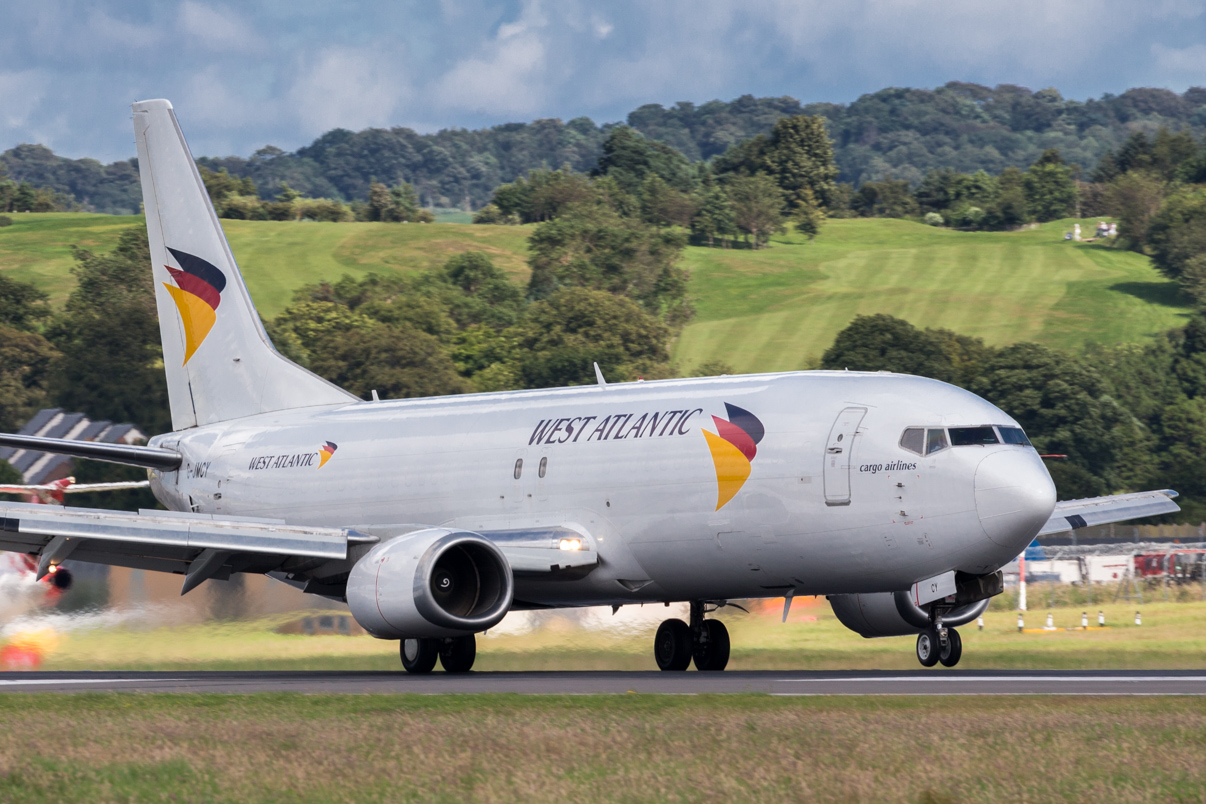 As with every airport in the world currently traffic has collapsed dramatically and it is unclear which routes will re appear, so what follows are based on a 2019 visit.

Like a lot of UK airports Edinburgh has a mix of scheduled and charter traffic and has a strong Ryanair and easyJet presence. Wizzair and Norwegian also operate low cost services. There are also a few of the rather ‘standard’ UK charter and European major scheduled carriers. 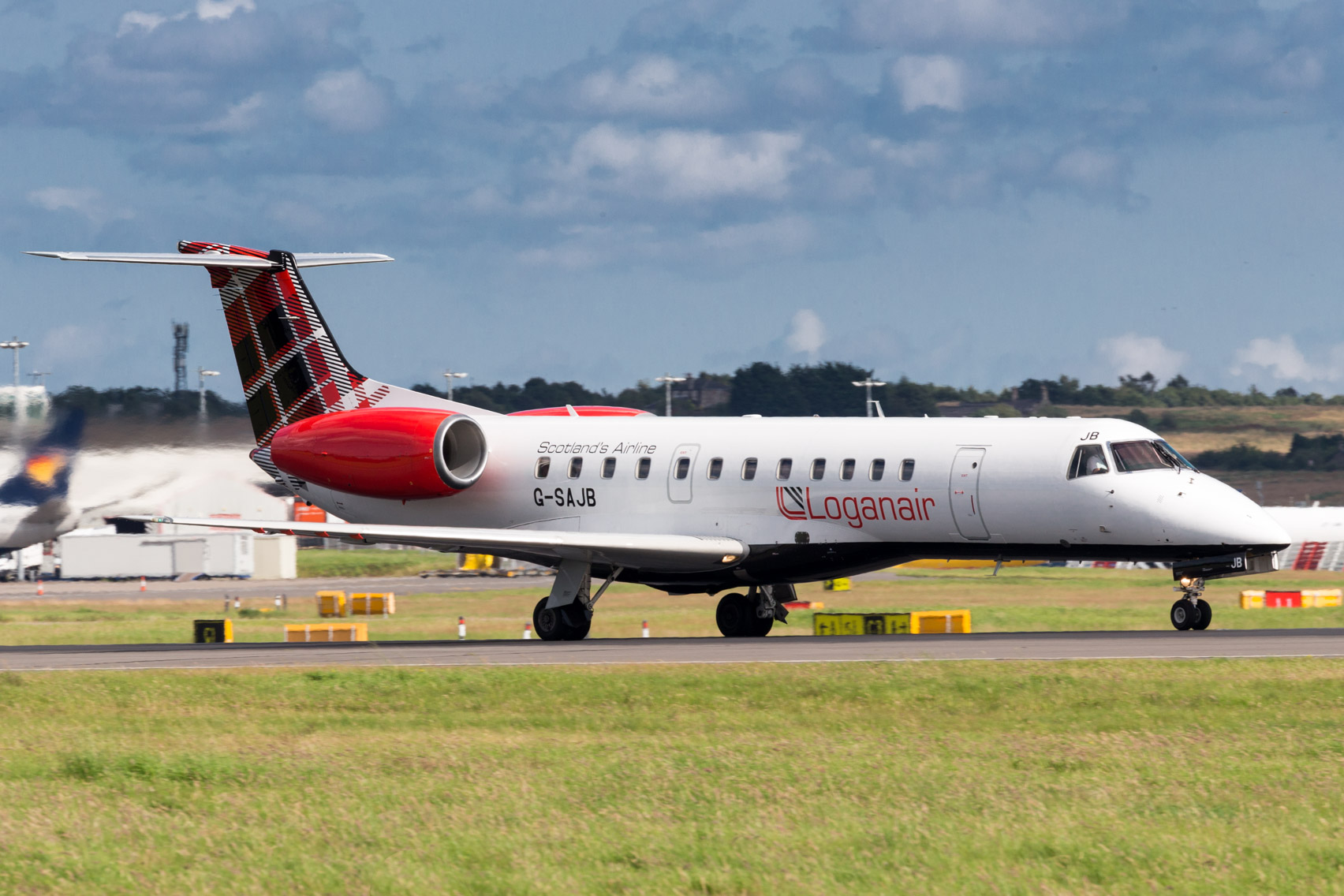 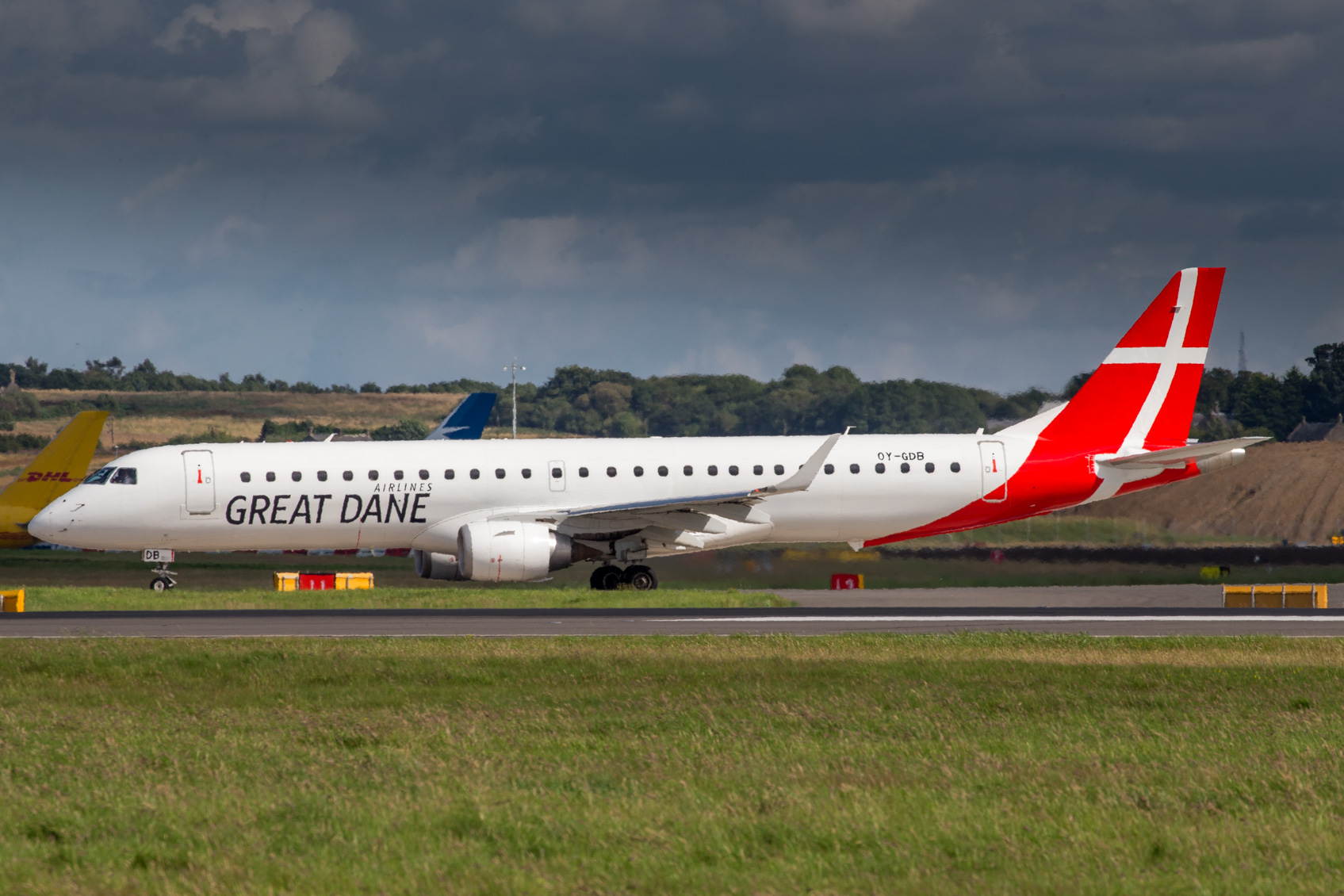 Not surprisingly Loganair have a number of routes and it is possible to see a range of their equipment.

Long haul services are provided by Delta, United, Air Canada Rouge and American Airlines to North America, with Emirates and Qatar out to the Middle East.

It is possibly northern Europe that provides the most interesting regular visitors in the form of Great Dane Airlines Embraer 190 and Atlantic Airlines A320/A319. Moving to the other end of the continent, Swiss operator Edelweiss also utilises the A320. 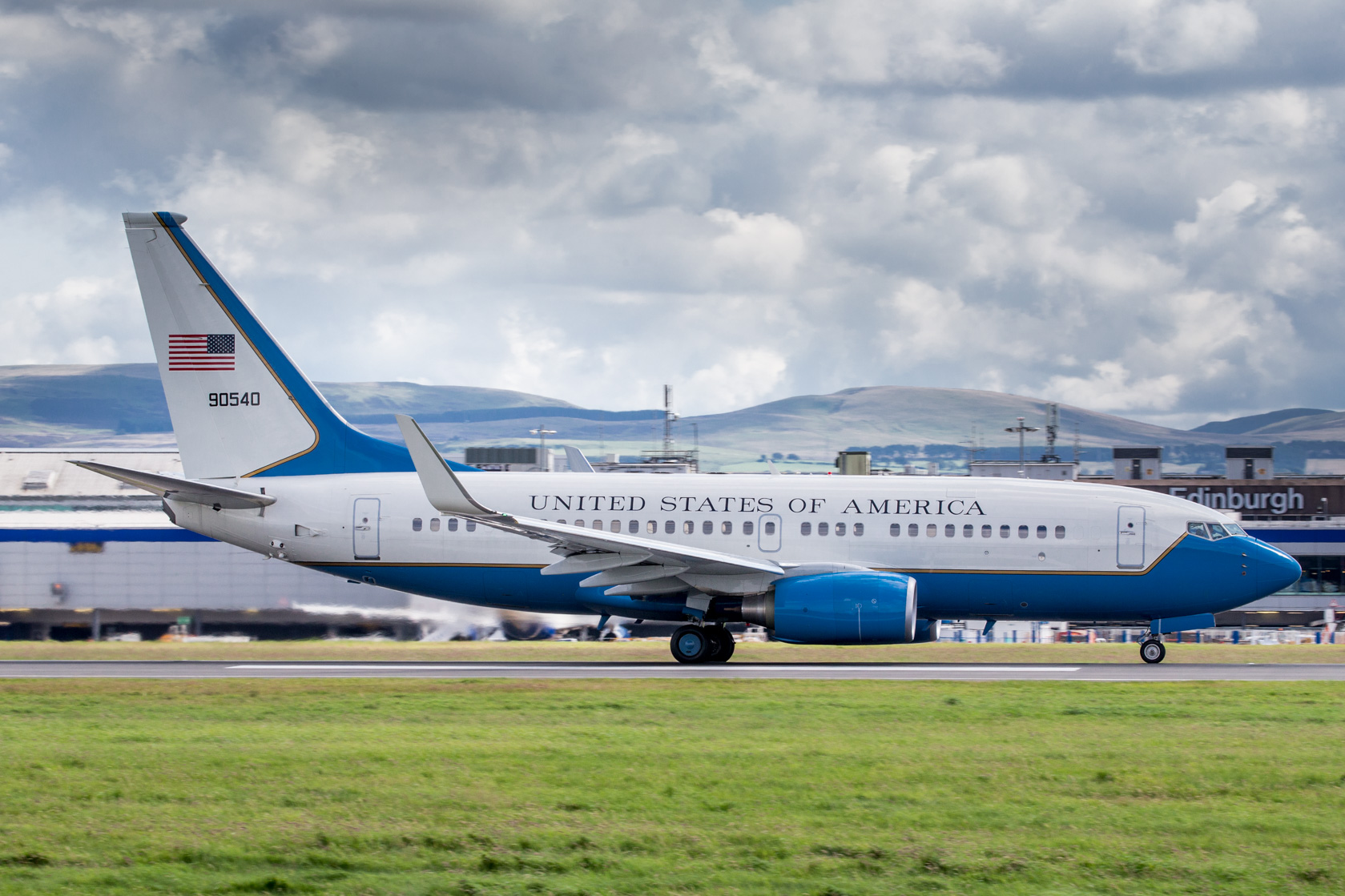 On the freight side, regulars are West Atlantic and FedEx Boeing 737s, Star Air 767s and DHL 757s. As the airport serves Scotland’s capital, foreign government visitors can often be viewed. Even the annual Edinburgh International Tattoo can bring interesting visitors, as was seen back in 2013 when a MIAT Boeing 767 brought a band to perform as part of the event.

All pictures are (c) Martyn Cartledge.

For more information on spotting at Edinburgh Airport, as well as all major airports and airfields across the United Kingdom and the Republic of Ireland, try our book Airport Spotting Guides UK & Ireland.

It gives you maps, descriptions and directions for spotting locations, plus public transport information and tips on spotting hotels and aviation museums to visit.

Update. Very little parking near the mound at ingliston now. Reachable by foot in about 15 minutes from the Hilton hotel bus stop in the way to airport but this will cost same as the price to the airport. If you get the tram to the park and ride it’s cheaper but a further 10 minute walk.