The latest buzz among spotters visiting Heathrow is the newest spotting hotel to be built at the airport, with reports on views being comparable to the Renaissance Hotel on the northern boundary.

The Premier Inn Terminal 4 is located a short walk from the terminal on the south east corner of the airport and opened in May 2017.

With Heathrow expecting to have a new runway in the near future, much of the area along the northern boundary, along with many of the existing hotels (including the Renaissance) is likely to be demolished to make way for the development. Therefore we can expect new hotels to spring up in areas not affected by the plans. The Premier Inn at Terminal 4 is the first of these to appear. With some good introductory nightly rates I decided to check it out ahead of an upcoming trip. Unlike some of the older Premier Inns, this one feels a little more upmarket. Still smelling quite new, the reception area is large, with self-service terminals and plenty of staff to help. I had telephoned ahead to request an airport-view room, however this had not been honoured when I checked in. But with a little checking among the housekeeping staff, a room was found for me on the 6th floor. Many of the rooms overlook a central area, and are therefore no good for watching aircraft. For the best views, you need a room on the 5th, 6th or, ideally, 7th floor facing the runway. This will ensure you don’t miss any movements at the airport, although it significantly favours the runways 27 direction being used.

It’s not easy to say whether odd or even rooms are best as they seem to mix the pattern, and different corridors are no good. Therefore, some rooms which are definitely good are: Rooms look out onto a couple of remote stands next to Terminal 4, plus the runway 27L threshold. Therefore you will have a great view of arrivals and departures on this runway.

Beyond you have a view of the southern part of the British Airways maintenance area, plus a significant portion of Terminal 2. In the distance you have a view of the eastern end of runway 28R.

If arrivals are on the 09 runways, you will miss some movements, and only see others when they taxi to terminals 2 or 4. Similarly, departures from 09 runways will only be visible after departure. Since this is such a new hotel, the construction uses the latest in soundproofing. I honestly couldn’t hear any aircraft or traffic from the room, despite how close it is to the runway. However, in order to achieve this, the windows have two thick panes of glass with a gap of several inches in between. The windows cannot be open, and therefore photographs had a tendency to be blurry and would require some sharpening to salvage.

Sadly on my visit it was raining quite heavily at times. However, I took some photographs to demonstrate the view, which can be seen here.

Another small problem from my room was the radar tower directly outside, which meant I had to carefully plan when to press the shutter!

Nevertheless, the rooms are very close to the action and there’s no street furniture in the way if you’re on one of the top three floors. If you’re bringing a car, the hotel car park has a standard rate of £25 per night. However, when I called to request a runway view room I was offered a special rate of £15, which I took.

Alternatively, you can park at Hatton Cross Underground station, close to Myrtle Avenue spotting location, which is a 5-10 minute walk from the hotel.

You can book your stay at the Heathrow Terminal 4 Premier Inn here: https://www.premierinn.com/gb/en/hotels/england/greater-london/heathrow-airport.html 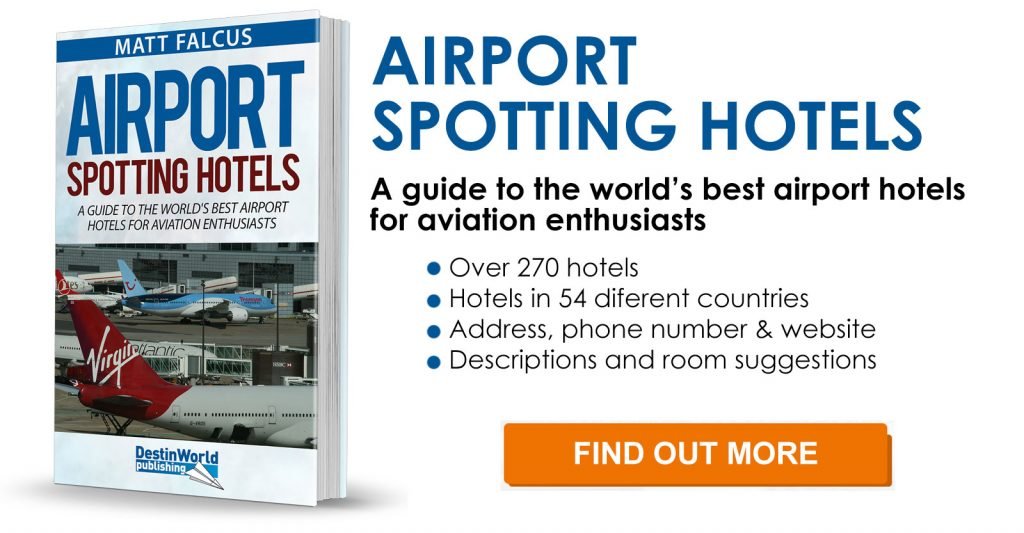 5 Airworthy DC-3s in the USA

Good and useful report. Is there a bar or public space on the rooftop?

Not on the rooftop sadly, only on the ground floor, with no views of the airport.

Thanks for the review, would you know if there is any disabled parking at the hotel?

The main car park is underneath the hotel and I think there is disabled parking, but best to check when you book.

I stayed 2 nights Rooms 685 and 691 Both good views, Parking also available at Maple Manor Parking just across the road 2 minute walk £15 per night

Thanks for the information, good write up. Would you have any idea if any of the room numbers quoted are family rooms?

Hi Dave, sorry I’m not sure. But the hotel staff are helpful on the phone and can probably advise you on the right room.
Matt

Just for information, rooms 758-762 are family/quad rooms, just in case anyone else finds that useful. Thanks again Matt.

Does anyone know if you can access the roof for an even better view??

I have just returned from two nights and armed with the list was allocated room 659.

It had excellent views of the approaches to the 27’s and across to the eastern gates of T2.

However, they later changed to 09’s and was not so good then.

It would probably be better if you could bag a room upwards of 671 or 771 to get a more general overview of all the movements.

The hotel seemed very busy and this was the only room available from the listing.

I’m not sure if any single rooms have views.
You’ll need to ask a member of staff for views when you check in.