A guide to spotting at Skiathos by Martyn Cartledge

Opened in 1971, Skiathos (JSI/LGSK) one of only four out of eleven inhabited Sporades Islands in Greece, situated around 83 miles / 133 kilometers from the mainland capital Athens. Constructed by reclaiming land from the sea between Skiathos and the former leper colony of neighbouring Lazareta, the airport is perhaps best known for its rather spectacular approach and landing, reminiscent of St Maarten. Given the short length of the runway the largest aircraft using the airport is the Boeing 757, although a 767 has once made a visit.

The Best Place to Spot Planes at Skiathos 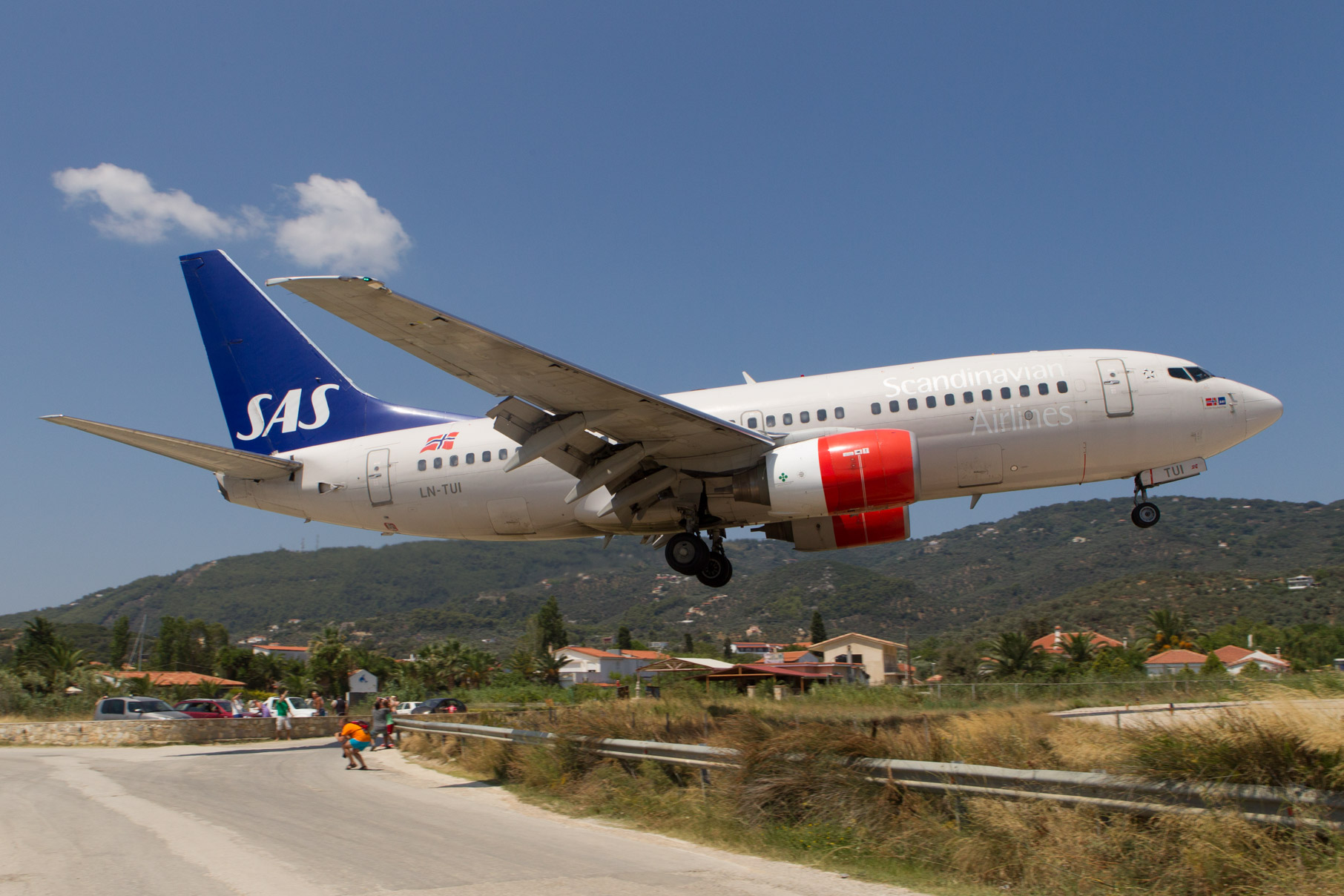 The most obvious and truly spectacular place to view aircraft here is from the harbour and car park area at the southern end of the runway. The majority of aircraft movements are from this direction. 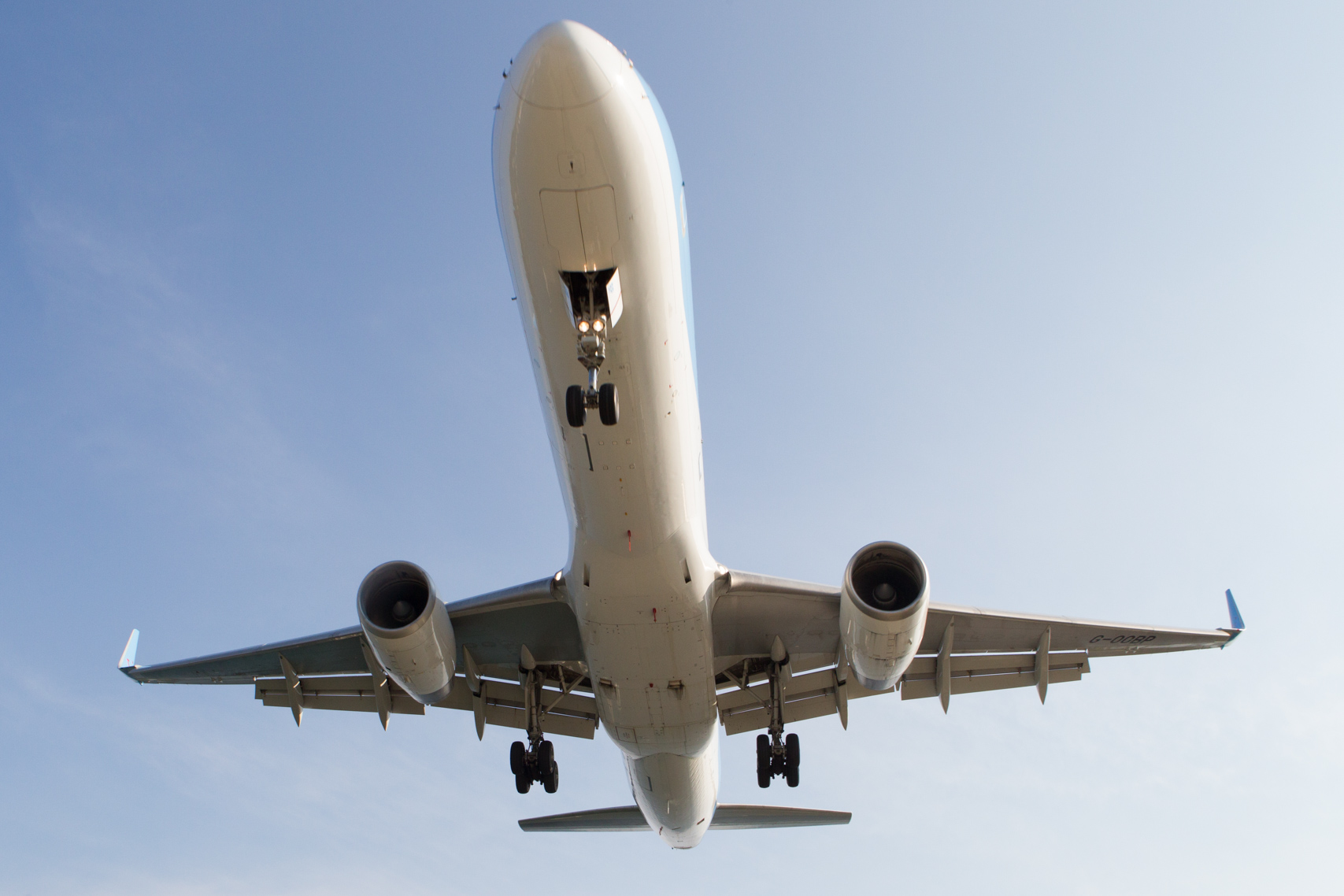 Directly under a Thomson B757 landing at Skiathos.

There are plenty of spots either side of the runway here, but don’t forget to try standing right underneath! It is quite an experience to be so close to a landing airliner – sometimes too close for comfort. If you look carefully at the picture of the SAS 737 you will see a person actually feeling the need to duck as the aircraft goes over him! 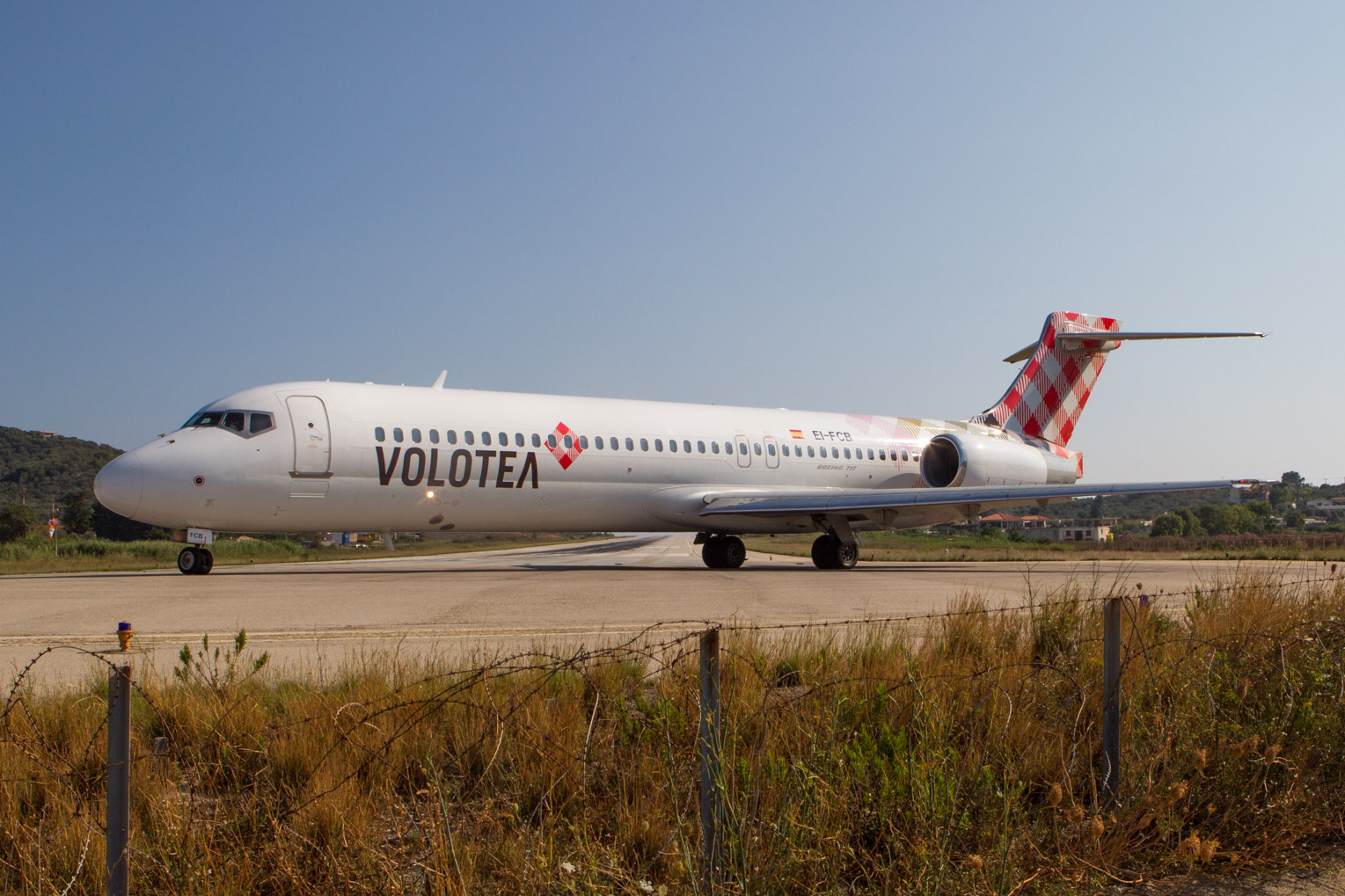 Departing aircraft are of course easily viewed and photographed from here. When they reach the turning circle at the runway end, they are very close, however shots are rather upward in angle unless you get up a little onto a wall or car if you have one. 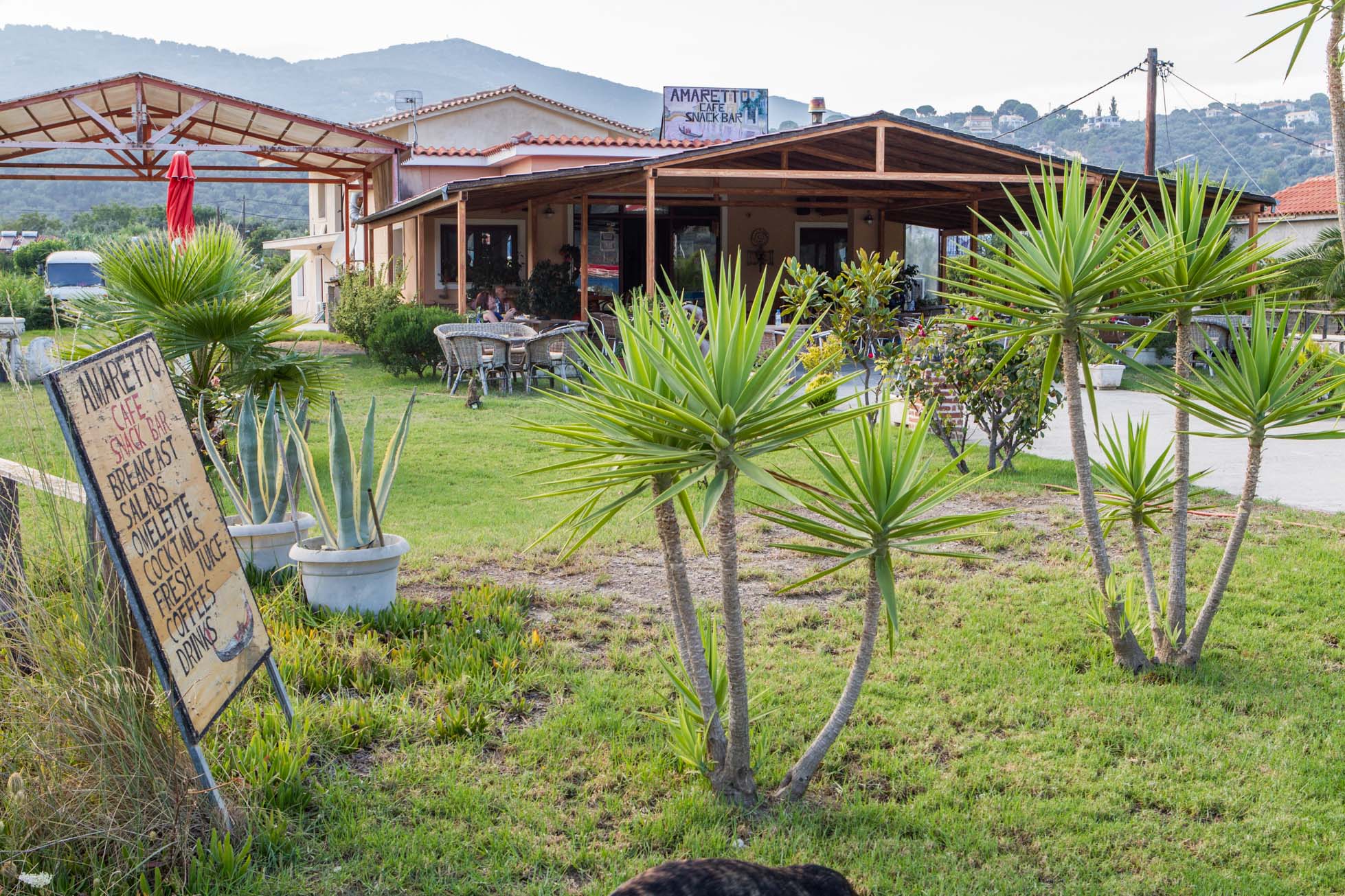 Additionally there is the Amaretto snack bar cafe which offers not only shade and refreshments. Along with ‘I survived the Skiathos jet blast’ key rings, a large TV screen showing arrivals from Flightradar24 and often other spotters with airband radios are present.

How to Get There

This area is reached from the airport itself by simply exiting left out of the terminal then sticking close to the building and following the runway down. It should take about five to six minutes to walk.

Alternatively take the one and only bus service if you are out in Skiathos town to stop zero, which is directly next to the port and it is again a short walk of about 8 minutes on the seafront keeping the sea to your right. 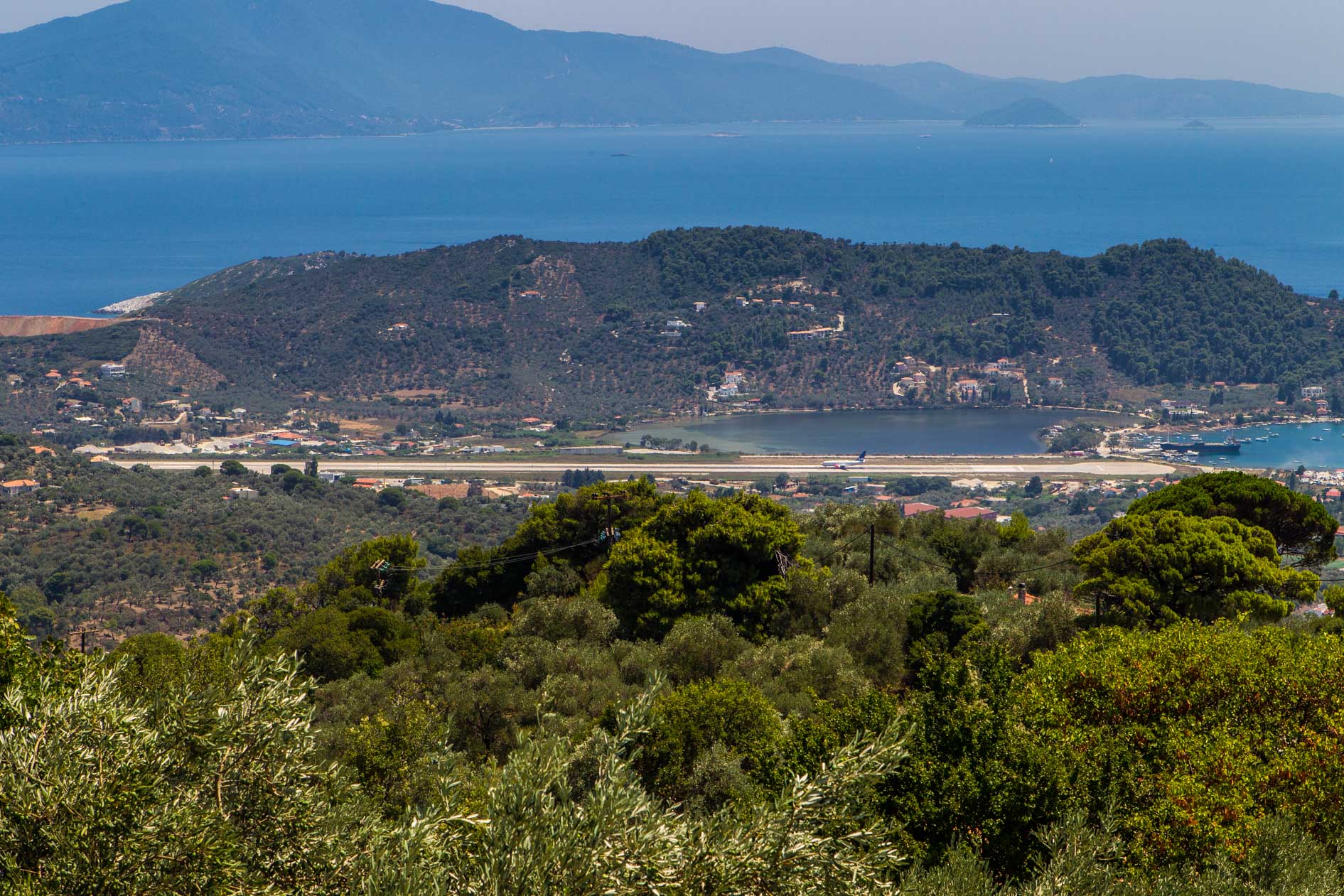 Spectacular as this area is there are more areas to view and take photos at Skiathos. In fact, due to aircraft settling in to the approach quite early they float past the new sea port side-on making it entirely possible to sit in the many bars, cafés and restaurants and take in the action. Bring along any decent telephoto lens and from late afternoon, due to sun position, shots are easy to get. 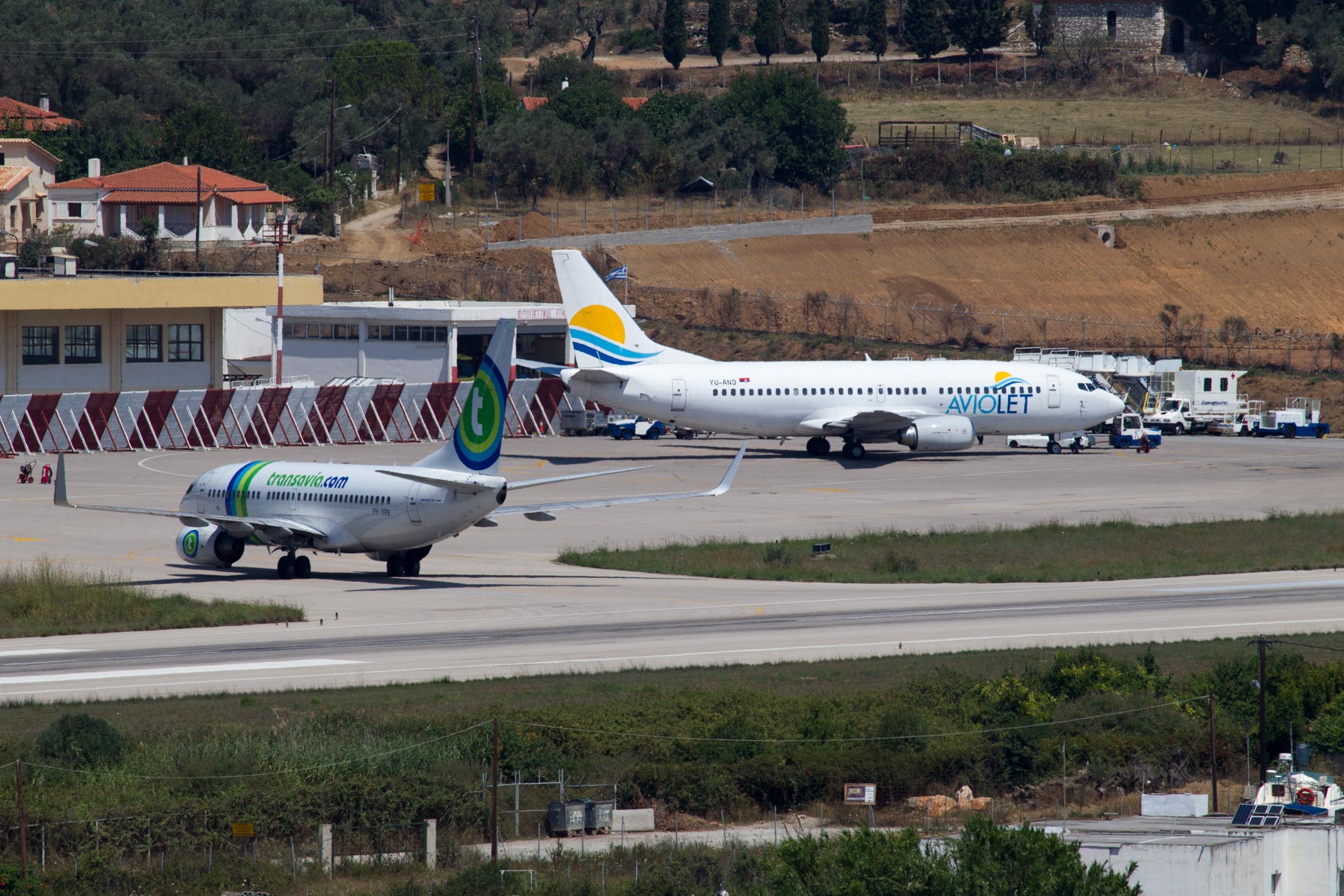 For the energetic amongst you interesting shots can be had from the hills to the south east overlooking the port and airport, with the benefit of the walk being not only the spectacular backdrops but also being on the better side of the runway regarding sun position. It may be wise to consider some form of transport given the heat and distance involved. 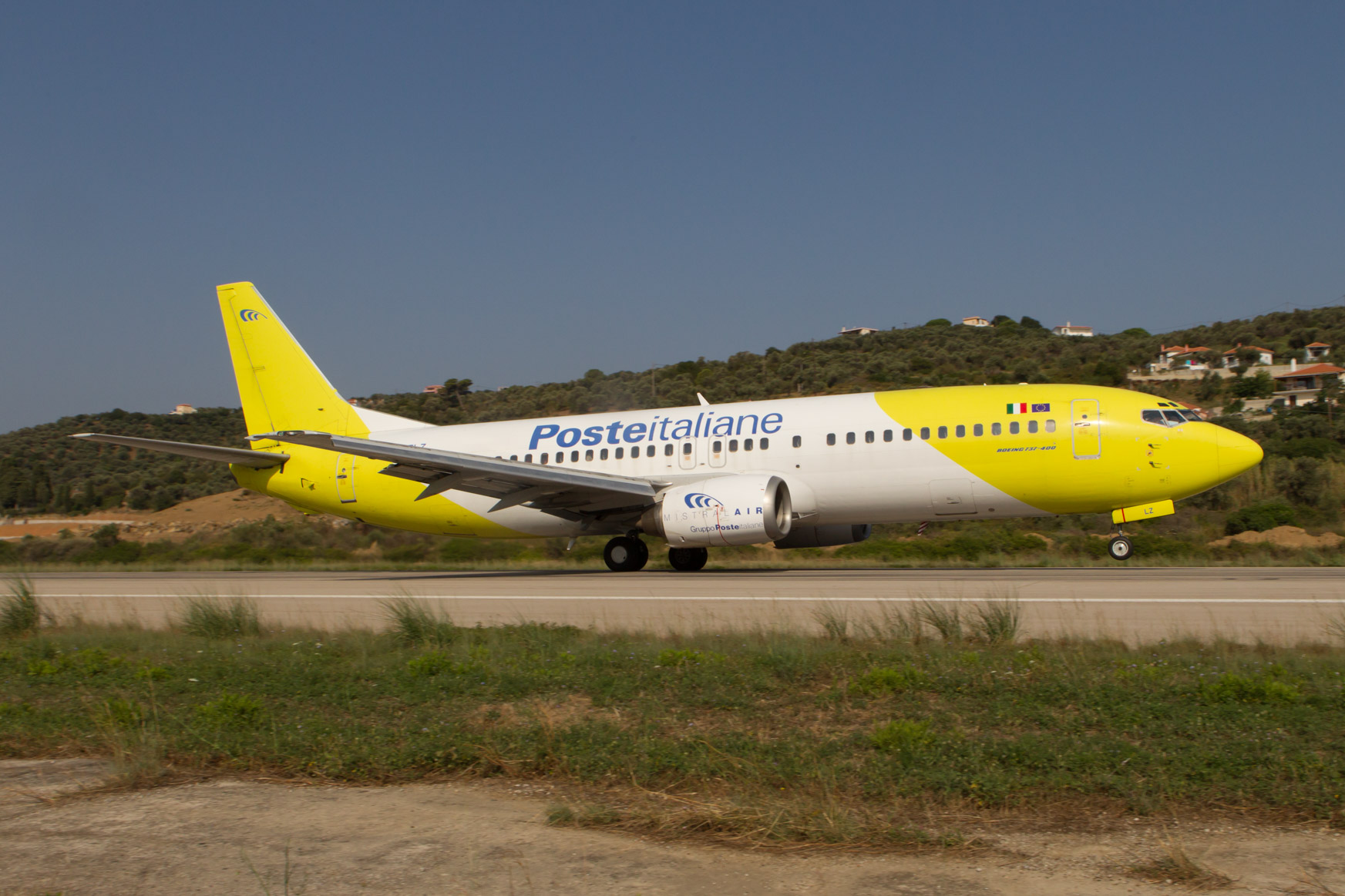 If landings are from the north onto runway 20 then head for Xanemos beach which is reached by continuing on the road from the airport but past the runway 02 threshold so that it is now running parallel to the runway again, but now with it on your left. If you are at the airport already then take a right onto the perimeter road instead. The distance from the 02 end is about 1.5 km so a long walk in hot sunshine. A vehicle is advisable.

Once there you can sit, relax and even swim in the warm Aegean whilst watching landings.

Departures are more difficult as you are a little distance from the runway 20 threshold.

There are raised areas at both ends of the beach to assist with landing photographs. It is here that the planned extension will be constructed if it ever gets the go ahead, so it is difficult to know what will happen to this area in the future. 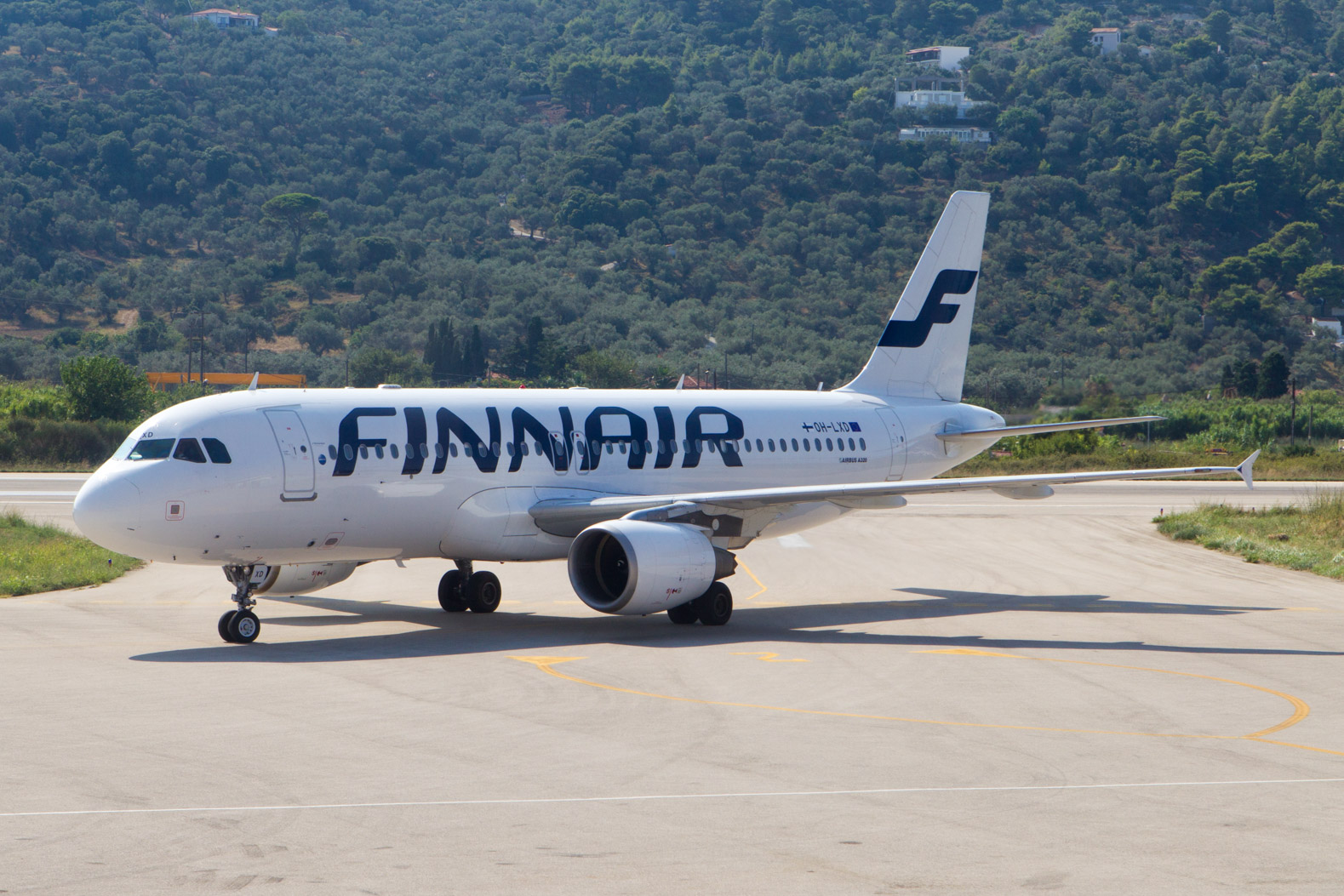 If you continue on the perimeter road back towards the terminal on the western side of the runway you will come to the village of Kaliva close to the northern end of the runway, with more views of movements. Further on you come to the ramp area which has undergone an extension.

Spotting Inside the Airport 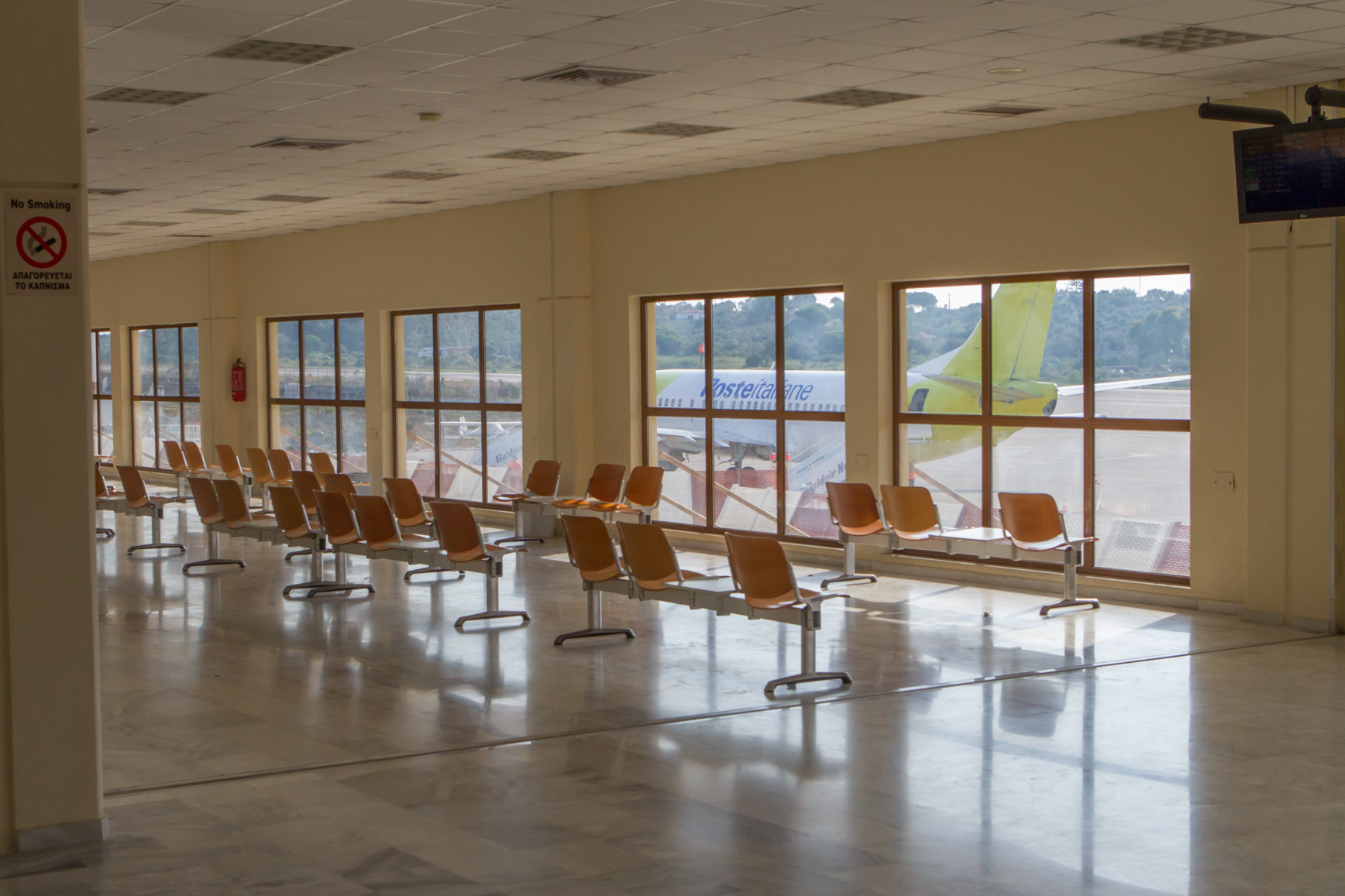 Inside the airport and upstairs where it signposts a restaurant (no longer there) and airport offices you can see out onto the apron through glass, again into sun for the most part but a good view nonetheless.

By no means the busiest airport given its restrictions, however, in addition to a smattering of the major European scheduled and charter carriers, Skiathos does have some interesting traffic. Airlines like Blue Panarama / Blu Express and Enter Air with 737s, Volotea with A319s and the growing rarity that is the Boeing 717. Unfortunately with the demise of VIM Aviation, their A319 that used to arrive on a sunday is no longer the star of the show.The main attractions are now probably TAROM A318s and Aviolet with 737s. 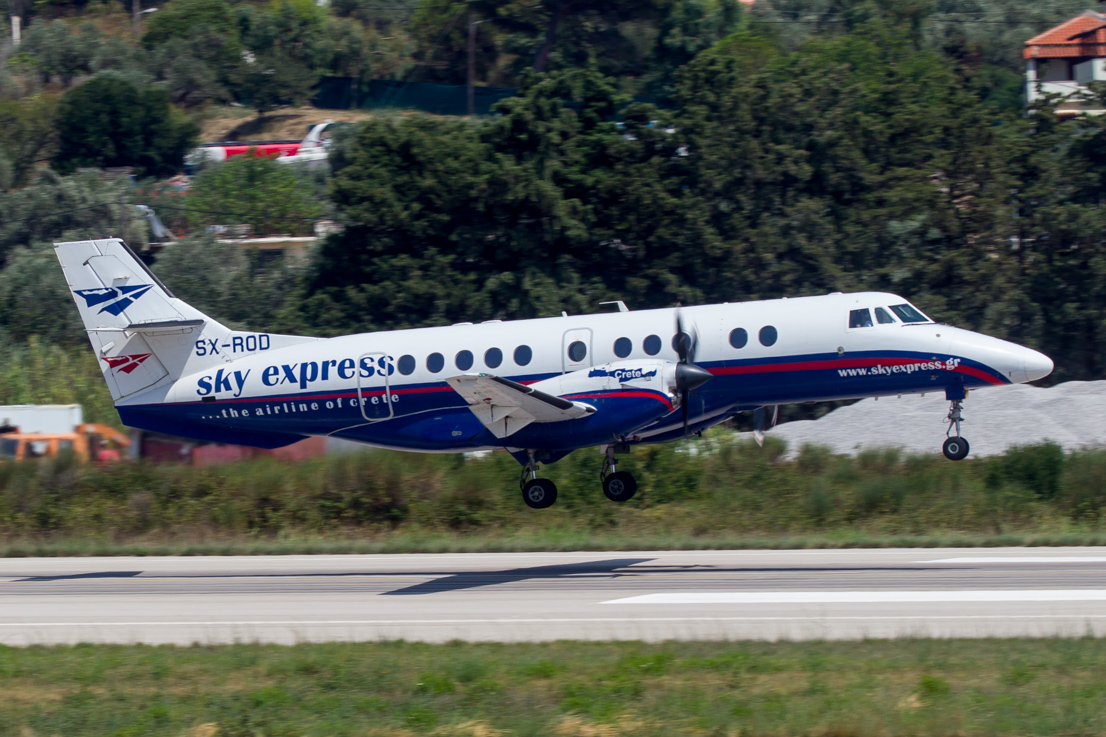 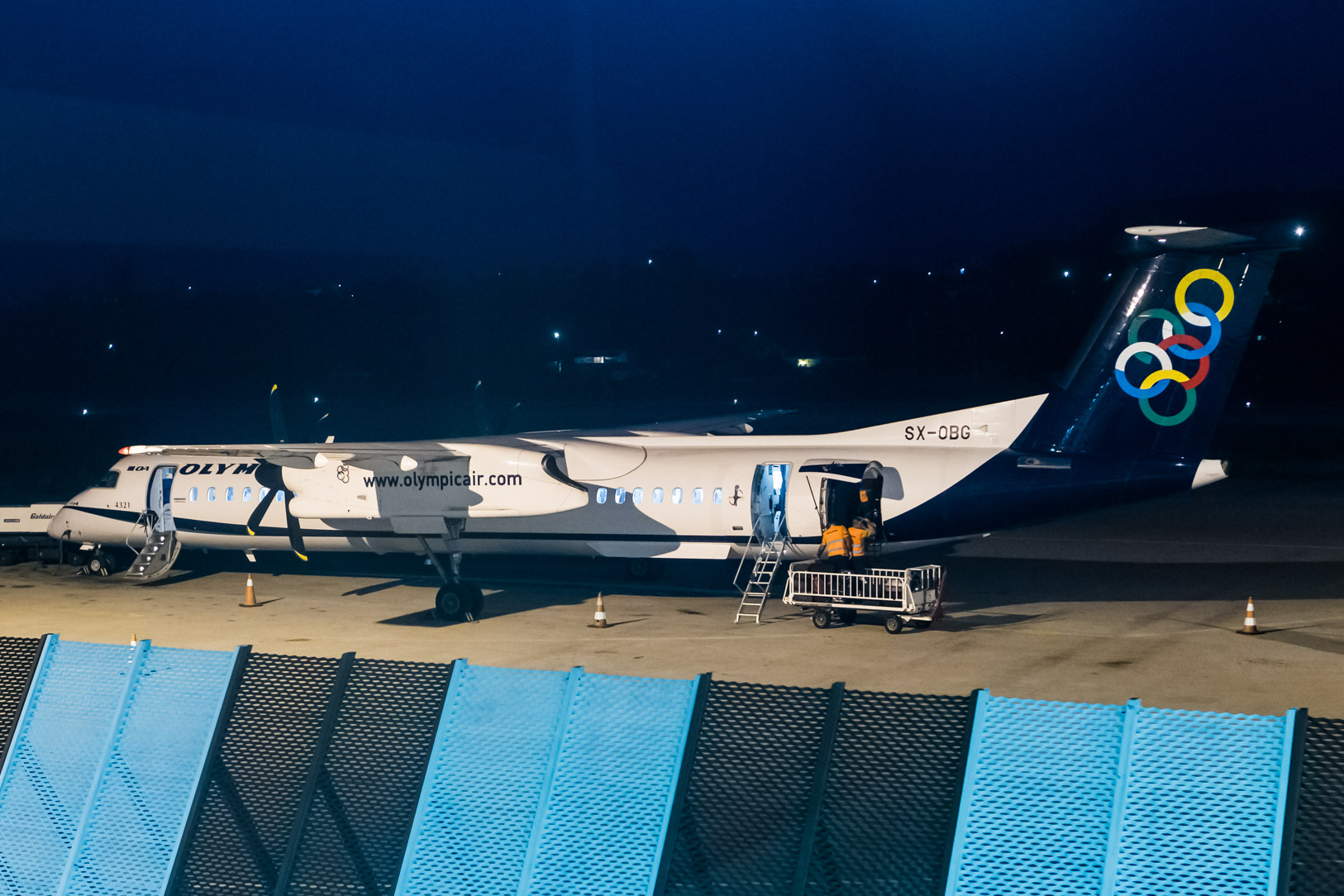 There is a small amount of domestic traffic with Sky Express Jetstream 41 and Olympic Aviation to Athens using A320 or DHC-8 Q400. This latter flight is generally in the dark, unfortunately, as they operate early morning and late evening.

However, its not really the traffic that is the draw here. It’s the chance to get some very different shots, and to get your sunglasses sandblasted by departing aircraft!

The updated, third edition of our popular spotting guide book covering hundreds of airports across Europe (including Skiathos!).

Discover the best spotting locations, with many maps, plus what you’ll see at each airport, any spotting hotels to use and aviation museums to visit.

Great article, Matt. Wonderful photos, too. This video was recorded at Skiathos in September 2019. Thomas Cook Airlines went bust around the same time, so there are also some repatriation flights featured.
https://youtu.be/VpoxkxjFLTw

I would advise NOT to stand under any landing aircraft or behind any that are taking off, jet engines are powerful things & I have seen many people blown over & in one case knocked out. Stand to the side for a FAR better view.