Spotting at Cancun from the Moon Palace Resort

One of the best resorts to stay at, and one of the best locations for spotting in Cancun while on holiday, is the Moon Palace Golf & Spa Resort.

Flying Si, one of our contributors, sent in this report from his recent stay there, which looks at what it’s like for aviation enthusiasts

The Moon Palace is a massive resort a mile or so from the runway end of Cancun airport. It’s so big, it is more like a small town than a hotel.

There are in fact three hotels on the site: Sunrise, Nizuc and Grand. Sunrise is nearest to the flight path.

The hotel is really nice, and the food and drink are all-inclusive, at a level I have not witnessed before. But it is expensive! From personal experience, there are a couple of frustrating points…

Even after repeated requests to get a room with an aircraft view., the resort seemed to find this task impossible. Trust me, I have dealt with hotels all over the world and never before have I come across such an inability to EVEN TRY to give you what you want. They repeatedly stated that the “rooms are allocated upon arrival story”. I guess the size of the place makes it difficult to follow individual requests. We ended up with a great beachfront room (which cost a packet), but with a poor view of aircraft. This resulted in having to view aircraft from the pool area.

Sadly, photography is a non starter. This hotel is only good for number crunchers. Aircraft are far to distant to be in lens range.

On the first three days of our stay all the departing aircraft flew right over the hotel and turned when they were over the sea. This gave plenty of time to see the aircraft at distance and identify them using Flightradar24.

For some unexplained reason, after that they started to turn pretty much as soon as they took off, and before they reached the hotel. I started having to “try” to look over the building to view the turning aircraft, and in many cases missing the aircraft altogether.

Only for 2-3 hours in the entire two weeks did the aircraft land over the sea. I have been told this is the norm, which is so annoying as you can see all of them when landing from this direction. 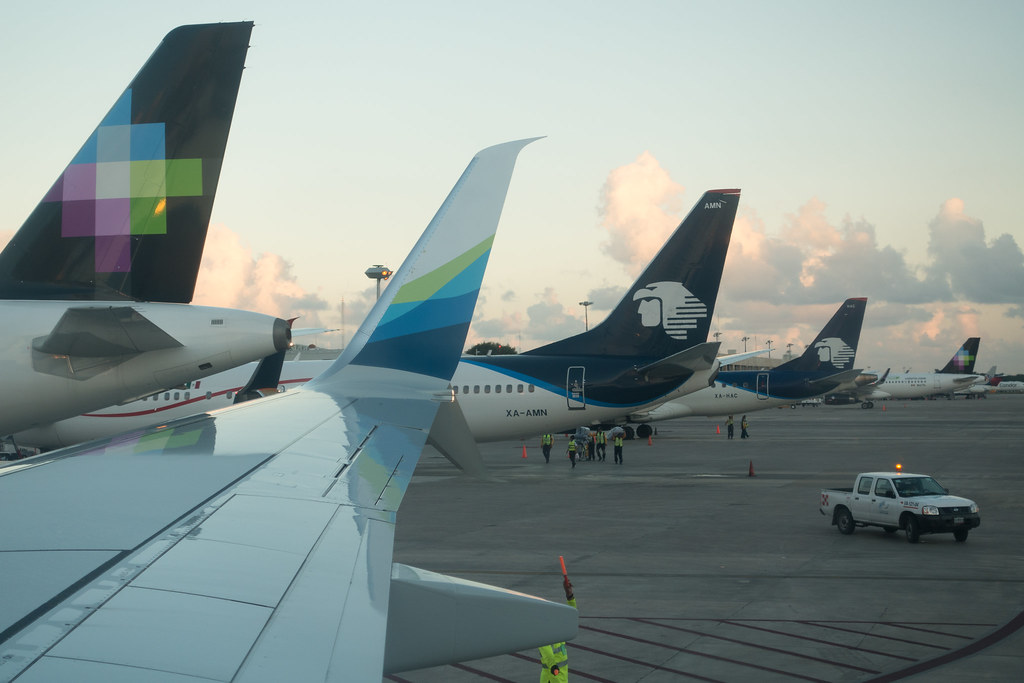 Cancun is one of the busiest airports in Mexico, and is a major tourist resort. As well as domestic flights, it sees a lot of flights from Europe and North America.

Traffic is busy and the variety excellent. You will make major dents in your InterJet, Aeromexico, VivaAerobus and Volaris fleets. In addition you will see as many US carriers like American, Delta, United, Spirit,  Southwest and JetBlue, all with constant flights.

South American flights make an appearance, with LATAM, Avianca and Aerolineas Argentinas flying in daily. Frustratingly some of the more interesting flights, like smaller cargo aircraft, don’t track, so it’s hard to know when they’ll pass over. Even the Interjet Sukhoi Superjet flights only track above 10,000ft. So you can tie them up a while after seeing them.

The airport grows busier during the summer months as more seasonal routes operate, bringing more aircraft to see and more variety. It is always an interesting place, and the nearby resorts a great place to relax in the sun. The Moon Palace hotel is amazing. Enjoy it, as it’s a very special place. The staff are so helpful, it’s just a shame the reservation staff cant assign rooms or even blocks prior to arrival.

We had a great two weeks there and I managed to clear over 800 aircraft – the vast majority being Mexican and US carriers. My highlight was a Cubana Antonov An158, which made a single visit.

US Airports With Resident DC-3s

First Air Canada A220 Takes to the Sky

Nice post. Shame you couldn’t get the room you wanted