Mike Stinson recently flew one of America’s newest carriers. Follow along for the ride…

I had an unexpected need to travel to Tampa last month, and with it came an unexpected opportunity to fly for the first time on recent start-up Breeze Airways. Breeze began service in late May from 16 cities in the United States, including Richmond, Virginia. My plan was to drive to Tampa, then fly back to Richmond International Airport (RIC), the nearest major airport to my home. 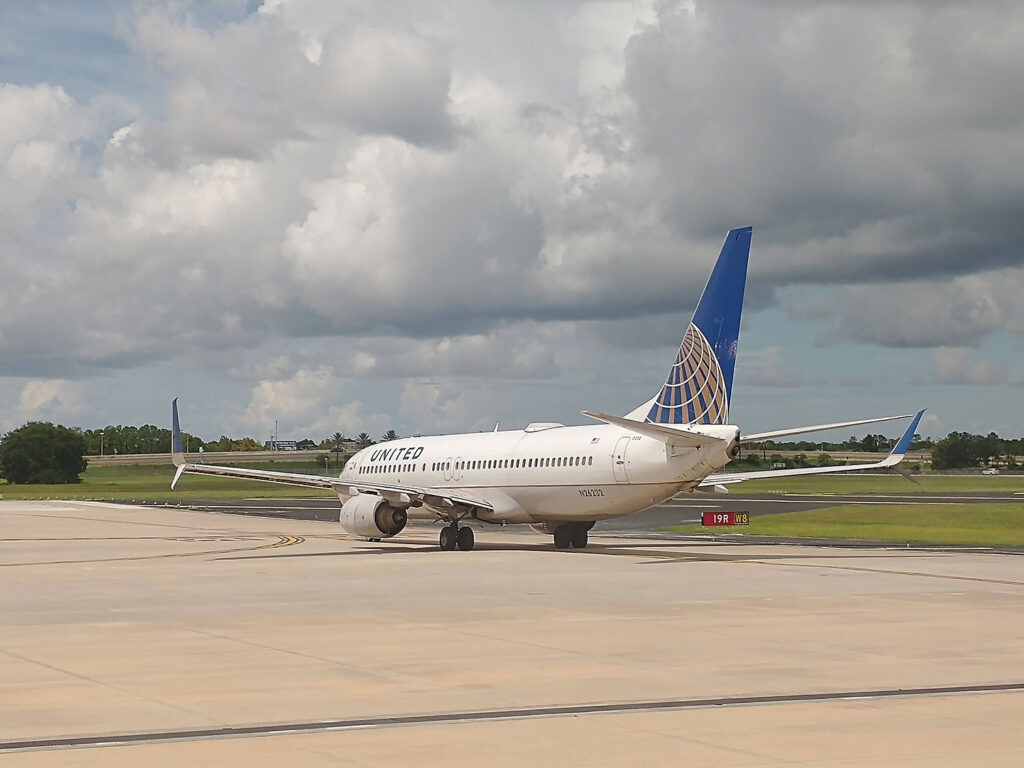 Breeze advertises themselves as the “nice” airline, claiming on their website that they are “merging technology with kindness.” They promise “seamless booking” and “no change or cancellation fees” when using their “sleek and simple app,” with penalty-free schedule changes allowed until 15 minutes before scheduled departure time. Together with their competitive pricing, I found all this promising. When I made my reservation, and later when I decided to extend my stay in Tampa, I also found that it was all true.

Purchasing my ticket on the Breeze website was simple. Options for essential choices of destination, date, and time as well as potential extra charges were all made clear. When I decided a few days later to reschedule my flight using the app, I have to say that it was also – a breeze. Not only was it easy, the ticket for my new departure date cost 15USD less than my original reservation, and that difference was returned to me as Breeze credit. 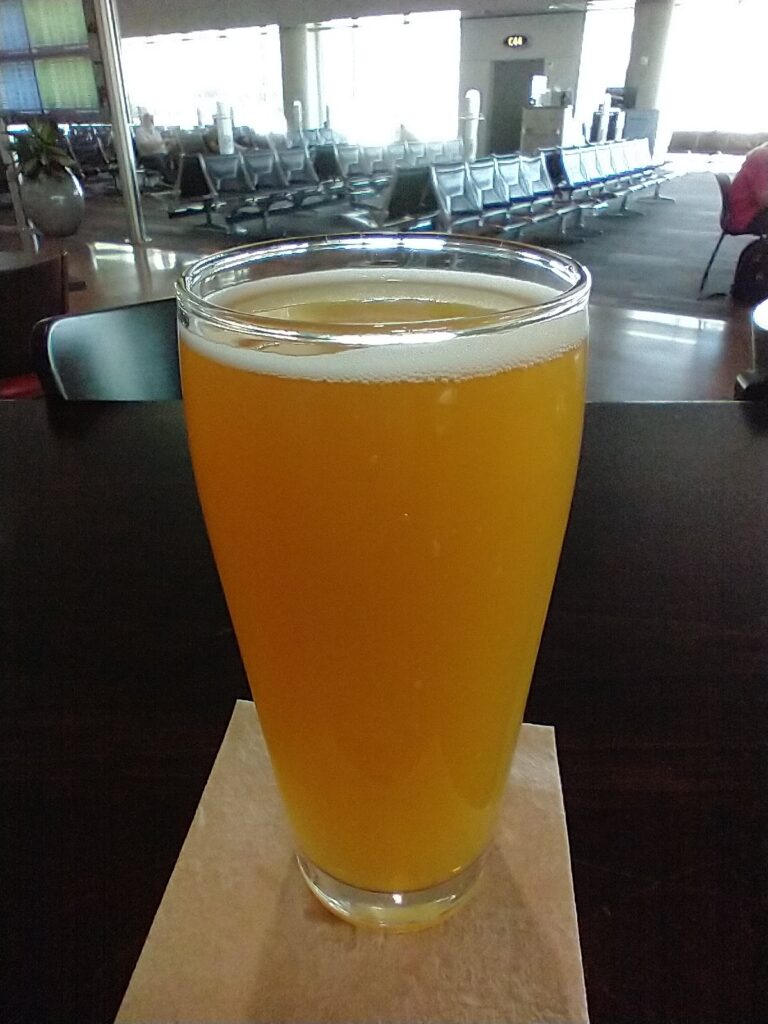 Waiting for my flight at Tampa International Airport (TPA) was also a pleasant experience. Getting through security took about 25 minutes, and the TSA agents seemed more friendly than normal. The gate for my flight was in Airside C and near an outpost of Cigar City Brewing, a Tampa favorite, and I had time to enjoy a meal and a fine IPA before boarding. 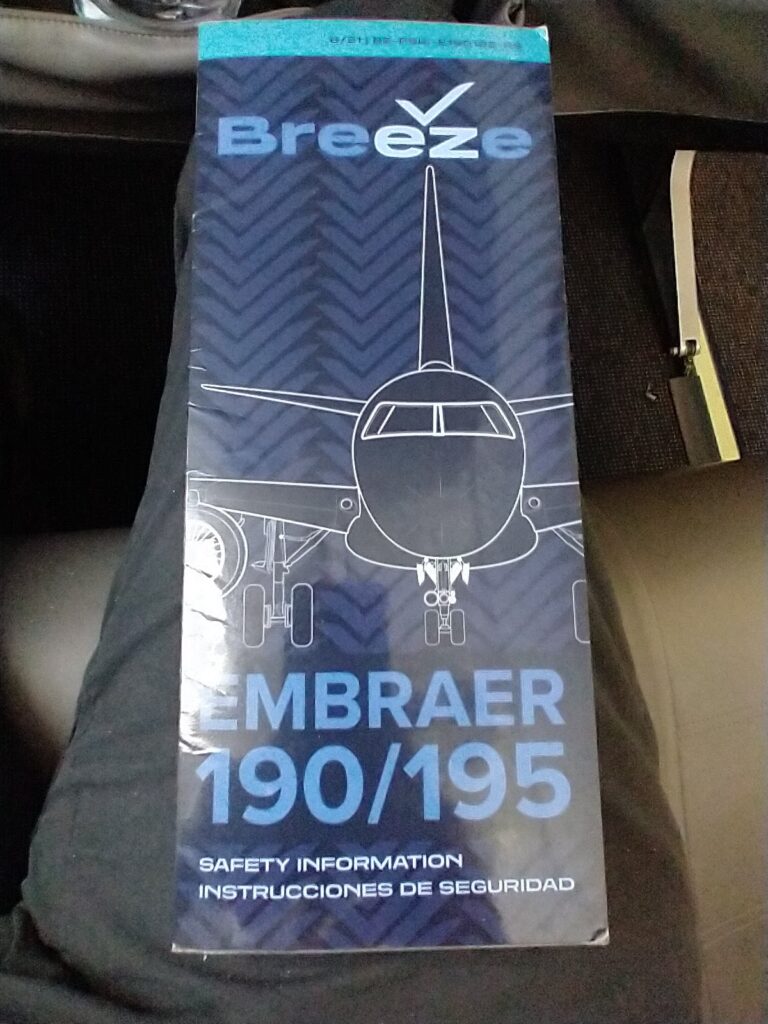 Breeze sells tickets at what they call “Nice” and “Nicer” levels, with Nicer ticket prices including a checked bag and priority boarding. With a Nice ticket, you’re allowed a personal item, but not a full-size carry-on bag. Like other low-cost carriers such as Ryanair, Breeze charges for added extras such as choosing a seat. The only extra I added to my Nice ticket was a carry-on bag, which cost 20USD. When boarding, I didn’t notice the Breeze employees paying much attention to what people were carrying on, but as it turned out, the plane was less than half full, so there was plenty of room for everyone’s bags. Although I had been assigned an aisle seat beside another passenger in the adjacent window seat, after the door closed for departure, I moved to a nearby window seat and remained there for the entire flight. 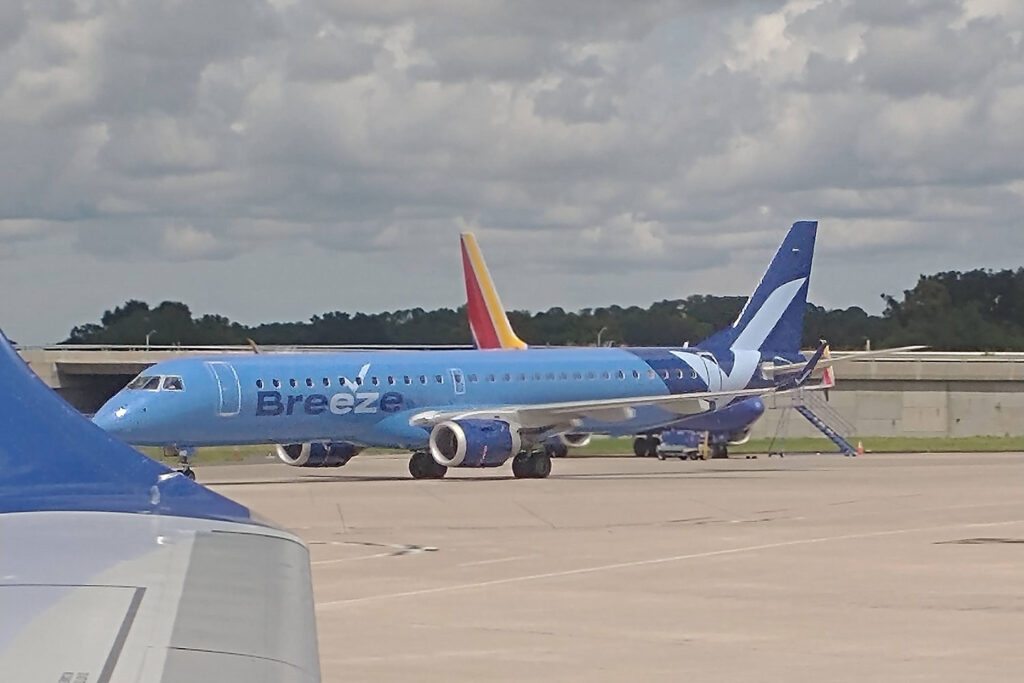 Breeze began service with a fleet of 13 Embraer jets, 3 E195s and 10 E190s. I flew on N193BZ, an E195 that had previously been registered to Azul Brazilian Airlines, another airline launched by Breeze founder David Neeleman (also the founder of JetBlue and two other airlines). While taxiing for departure, I saw another of Breeze’s E195s, N192BZ, that had just landed at TPA and was taxiing to the gate. Azul started with a small fleet of Embraer 190s and 195s, then expanded to dozens of Airbus 320s and 330s, much like the approach that Breeze appears to be taking. Another Brazilian connection between Azul and Breeze is the bright blue livery sported by Breeze planes, which was designed by Gianfranco Beting, co-founder of Azul with Neeleman. I find these blue planes eye-catching and attractive. Breeze has 80 Airbus 220s on order, with their first A220 registered (N203BZ) and expected to enter service this month. This is evidence of Breeze’s plans to expand their service network well beyond its current range of cities, perhaps eventually to include international flights. 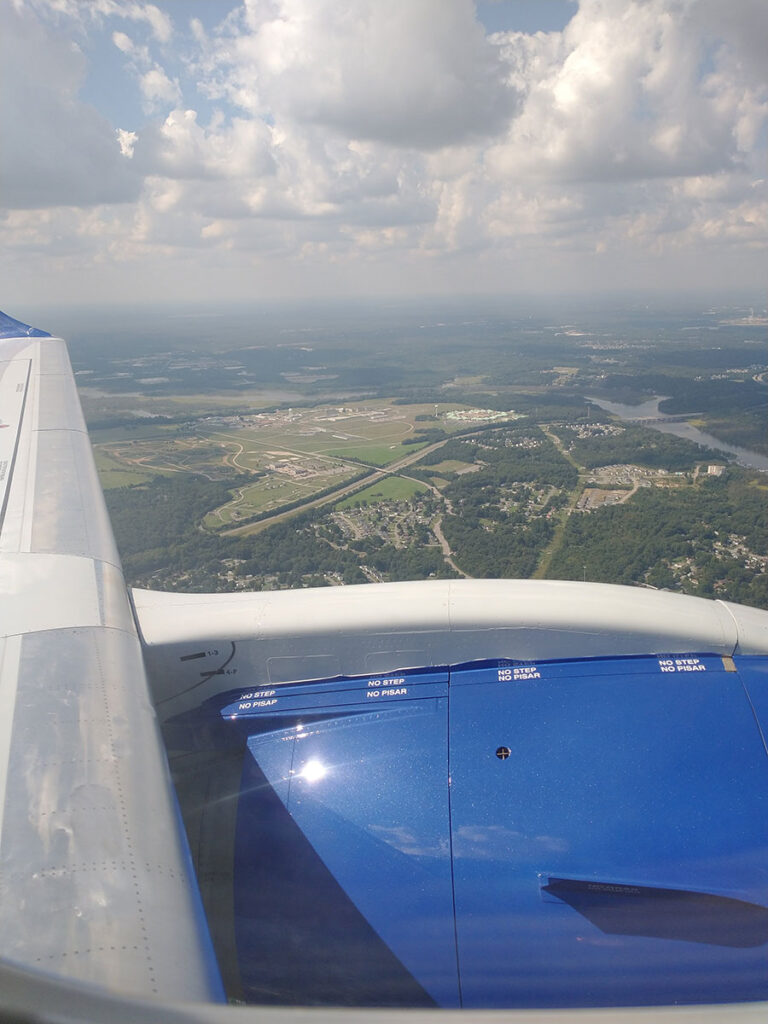 Early in our flight from TPA we flew north along the western coast of the Florida peninsula. Several barrier islands were visible, along with Cedar Key, while the plane was gaining altitude. Much of the flight continued over the Piedmont of Georgia and the Carolinas, with our descent to RIC beginning just south of the Virginia state line. Skies were partly cloudy, but I was able to enjoy views of the landscape for much of the route, including during our descent into Richmond as we banked low over the James River east of the city. Our flight time was 1:38, and we landed about two minutes before our scheduled 2:30 p.m. arrival time.

I look forward to seeing where Breeze goes next as they expand their service network. Given their low ticket prices and the pleasant – or perhaps I should say, nice – experience I had traveling from TPA to RIC, I also look forward to another flight on this new airline.