Trip Report – Spotting Weekend in Norway – Part 1, Getting There

It’s been too long since an aviation trip involved going overseas, so a plan was made to make use of a long weekend with no other plans, with the purpose of getting flying and spotting again.

When planning the trip, which took place in mid-October, my criteria were to try and fly on new aircraft as a priority, followed by new airlines or visiting new airports, visiting museums, or maybe staying in a hotel with good views.

Looking at the available options, and my long aviation “bucket list” of things I’d like to do, I settled on a trip to Norway.

A lot to cram into four days? Tag along and see. Off we go to Norway! 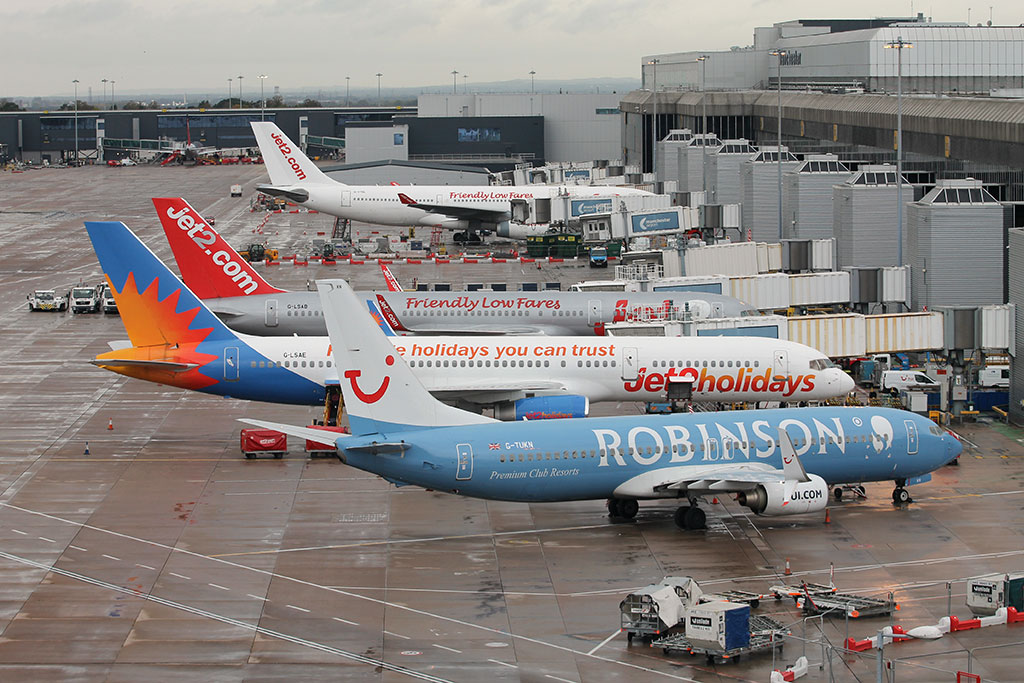 After a busy morning getting some work jobs done and loose ends tied up, I was on the train from my local station which would whisk me straight to Manchester Airport in around three hours.

During this time I was able to work on the laptop fairly easily, getting some useful work done (another priority of the trip – time away with the laptop with fewer distractions).

Once at Manchester, I had a few hours to spare, so I went up to the top floor of the multi-storey car park to see what aircraft were in, and maybe get some pictures.

It was a little rainy and cloudy (typical Manchester!), but I enjoyed an hour or two watching aircraft come and go from the Terminal 2 area, plus Terminal 1’s C gates. You can also see the runway in the distance.

Highlights included a Biman Bangladesh 787, SunExpress 737-800, TUI 737 MAX in Robinsons scheme, and my first sighting of an Air France Airbus A220. 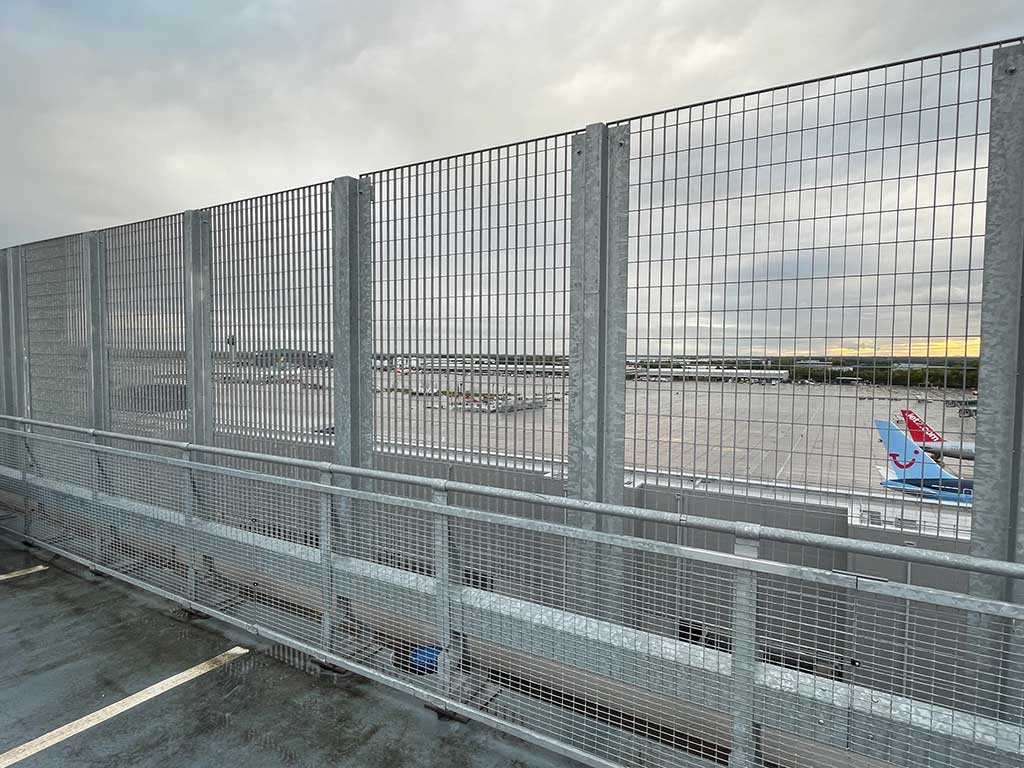 After a while I walked to Terminal 2 and checked out the multi-storey car park here – a relatively new addition which has some views over the parking gates, but sadly through mesh so photography was not possible.

It was three hours till my flight, but I’d checked in online and thankfully the baggage drop desks were open. Tonight I was flying Norwegian Air Shuttle to Trondheim – a flight which departs close to 9pm. 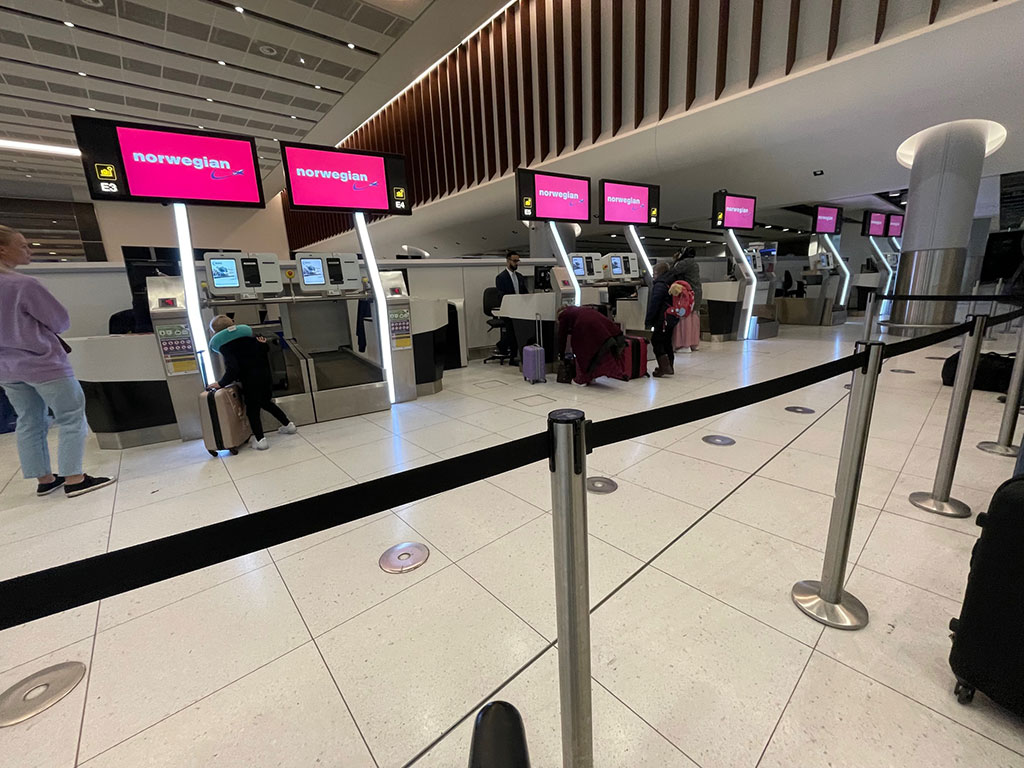 Terminal 2 at Manchester has been undergoing major transformation and looks nothing like it used to. In the part I was ushered to, there is now a large food court and shopping area. Views through the windows overlook the terminal’s apron, but are quite limited and it was getting dark by now anyway.

I had some food and drink, and waited for my gate assignment. Norwegian has four flights departing together on a Friday night, so it was a busy gate area, in the new pier built a few years ago at the terminal. 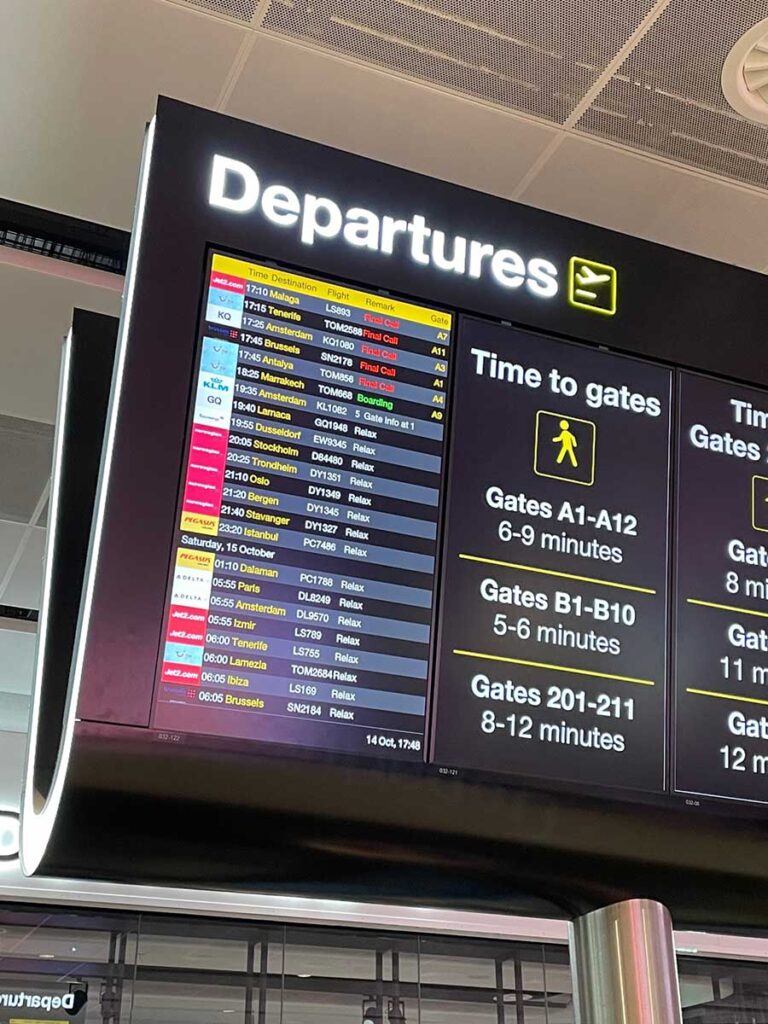 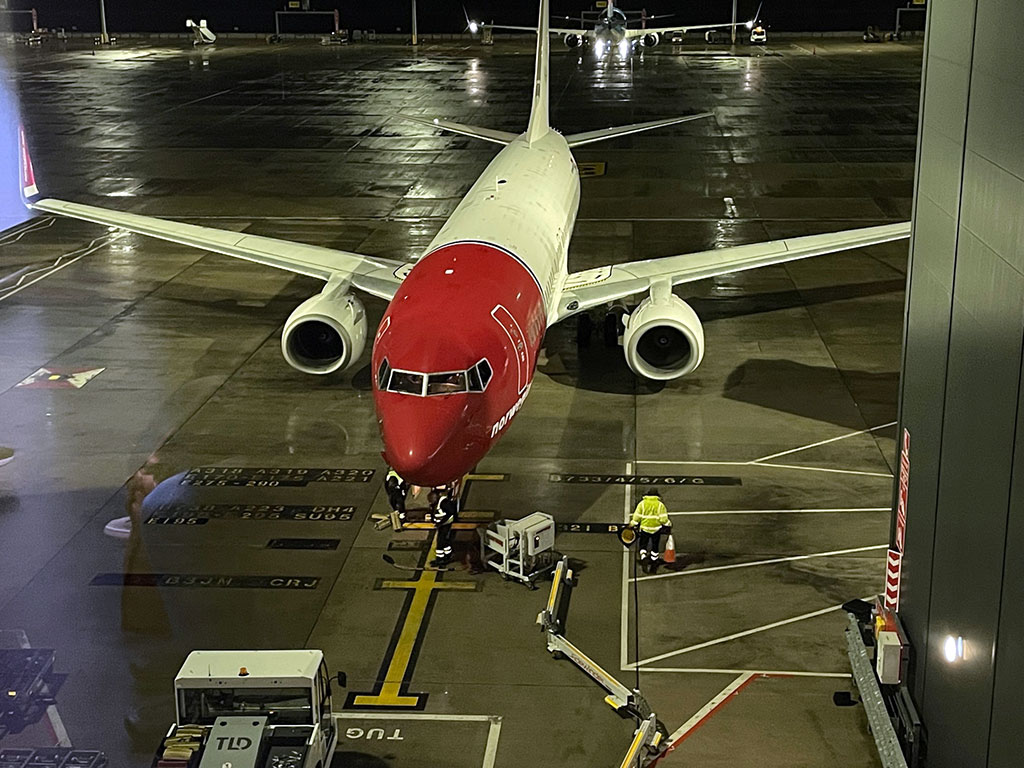 My aircraft, LN-NIK, rolled up to the gate a little late. But to Norwegian’s credit it was a very quick turnaround and we were soon boarding.

This Boeing 737-800 had previously flown for Shandong Airlines and Eastar Jet, and joined Norwegian in March 2022.

I had a window seat assigned, and the flight was fairly full. The windows had all steamed up, so as we got underway there was only a blurred view of the outside world until we started our takeoff roll on runway 23R and the windows cleared. 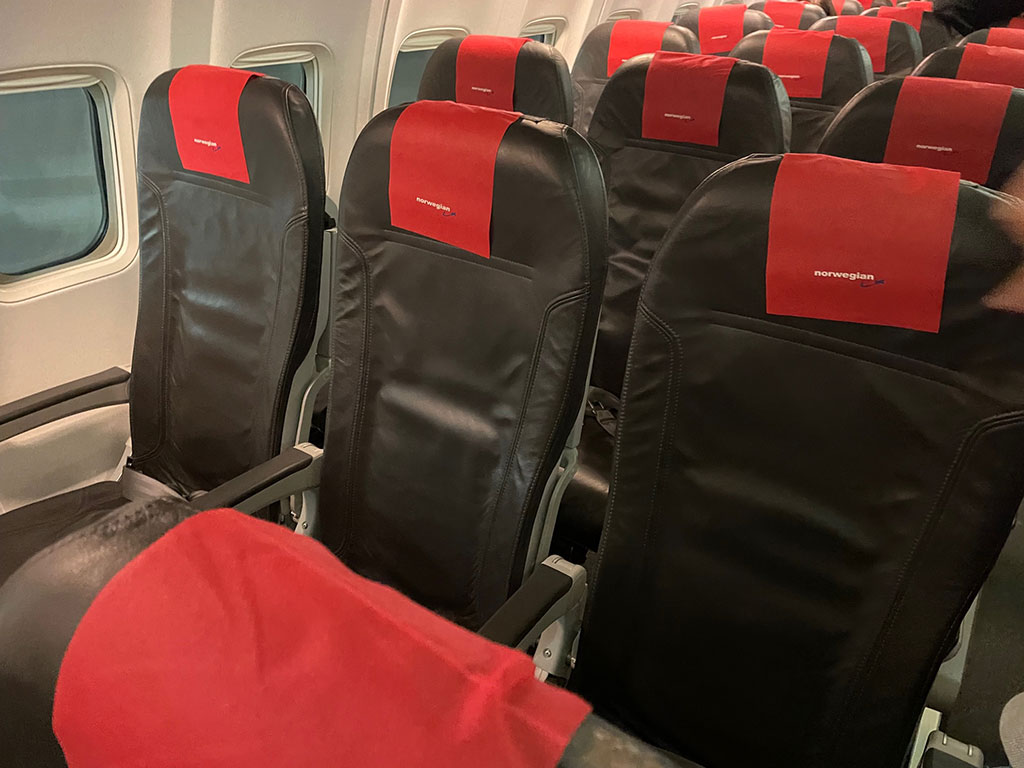 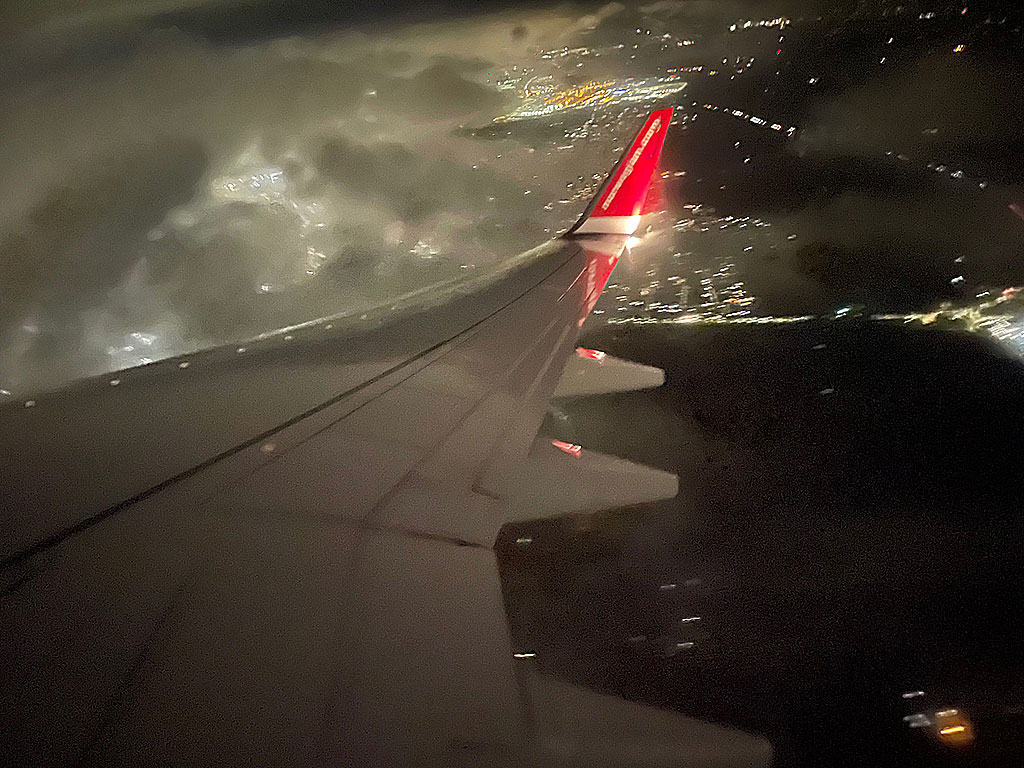 We rocketed into the Manchester skies and made a right-hand turn to the north-east, flying over my home not long after, and coasting out over the North Sea for a 1h 50min flight to Trondheim.

Service was buy-on-board drinks, food and duty free products, and the staff were friendly.

We made our approach over the city itself, then over the water to land from the west. It was quite a firm arrival followed by swift braking to make the pilot’s preferred turn-off point adjacent our remote gate at the terminal. 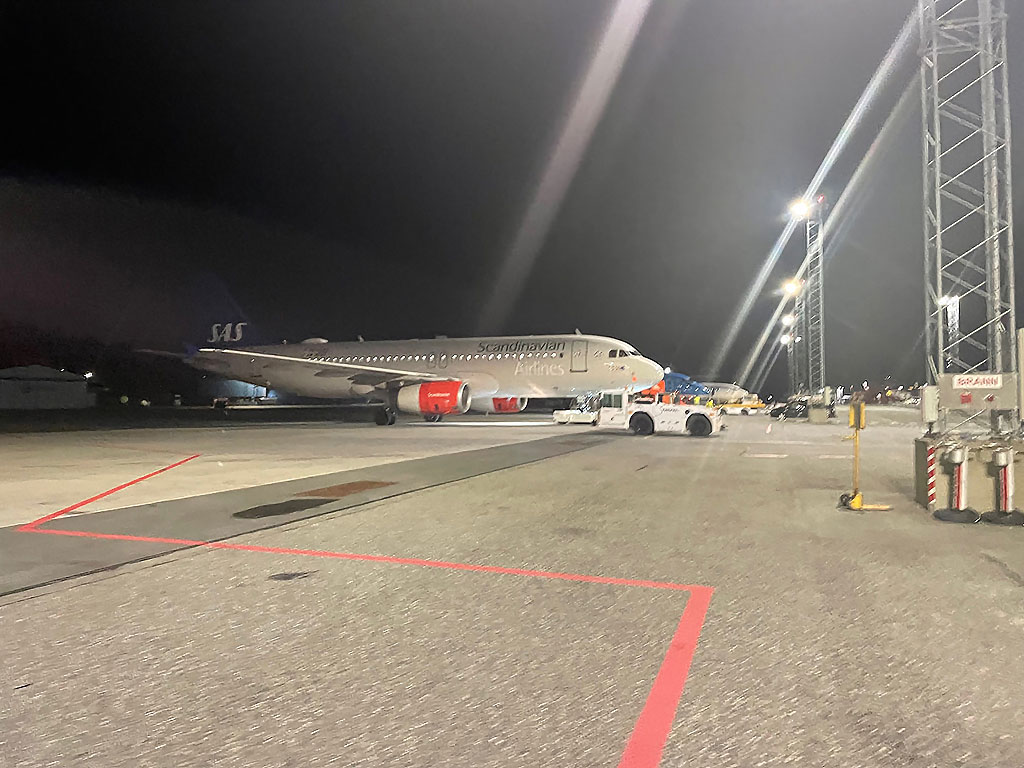 This was my first time visiting the Schengen area since Britain left the EU, and thus the first time I’d received a stamp in my passport for doing so, or been subject to any form of questioning on my intentions in the country. Purely tourism of course (it was too late to try to explain why I’d be hanging around at airports).

I’d booked into the Scandic Hell (with its ‘Your Stay in Hell’ confirmation email) which was thankfully only a 5-10 minute walk from the terminal, and much cheaper than the Radisson at the terminal which admittedly has better views. It was after midnight and all I wanted now was some rest.

You’re right, thanks Paul. Mistook the registration for a MAX.

[…] Part 1 I travelled from home to Trondheim in northern Norway, by way of a Norwegian Air Shuttle flight […]

Hi Matt just received your lastest spotters guide and was disapointed to see you have not included Redhill airport, busy little place used to be Bristows main place, I know the place but some others are not familiar with what its got to offer .