So far we’ve travelled from home to Trondheim in northern Norway, by way of a Norwegian Air Shuttle flight from Manchester.

You can read the first part of the trip report here 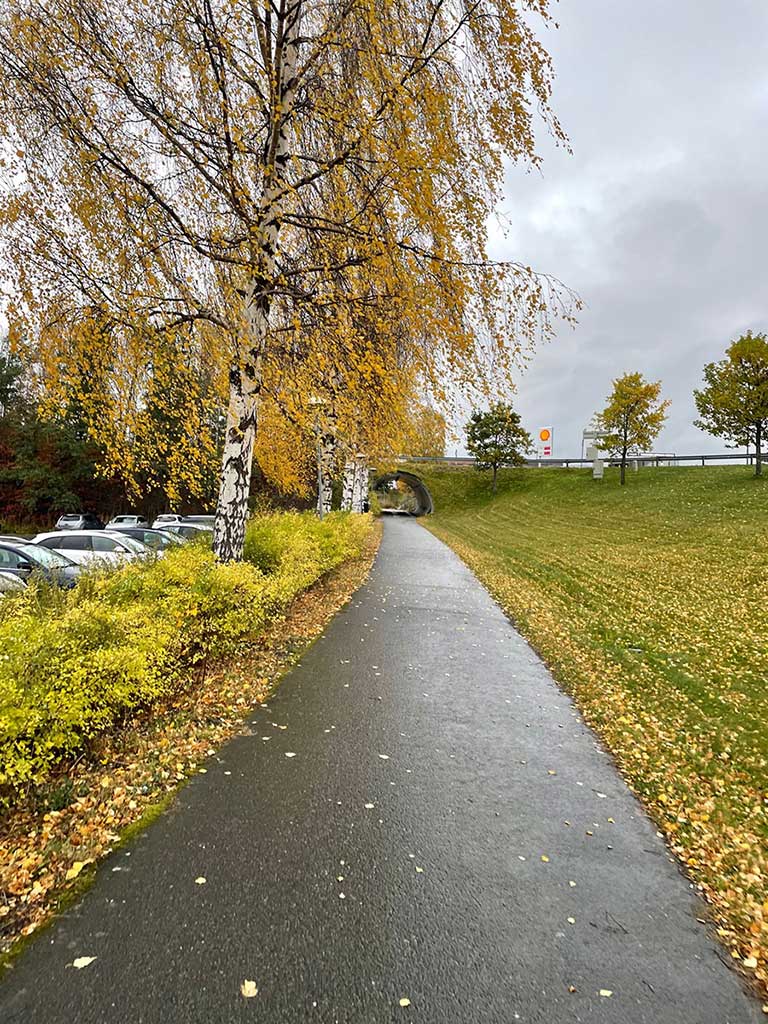 I woke in the Scandic Hell hotel at Trondheim airport and had a leisurely breakfast, which was included. In Scandinavia, of course, you have meatballs for breakfast!

I packed and left around 10am and walked the short distance to the terminal, with the hilly and autumnal surroundings visible for the first time, since I arrived late at night.

The terminal at Trondheim is a modern and bright building. I’d already checked in online for today’s flights, so I tried one of the kiosks which was able to print me a tag for my checked bag, which I then placed on a belt before it was whisked away.

After passing security I was in the departures area which has a number of shops, cafes, bar and good views along its length looking over the runway and parking gates. 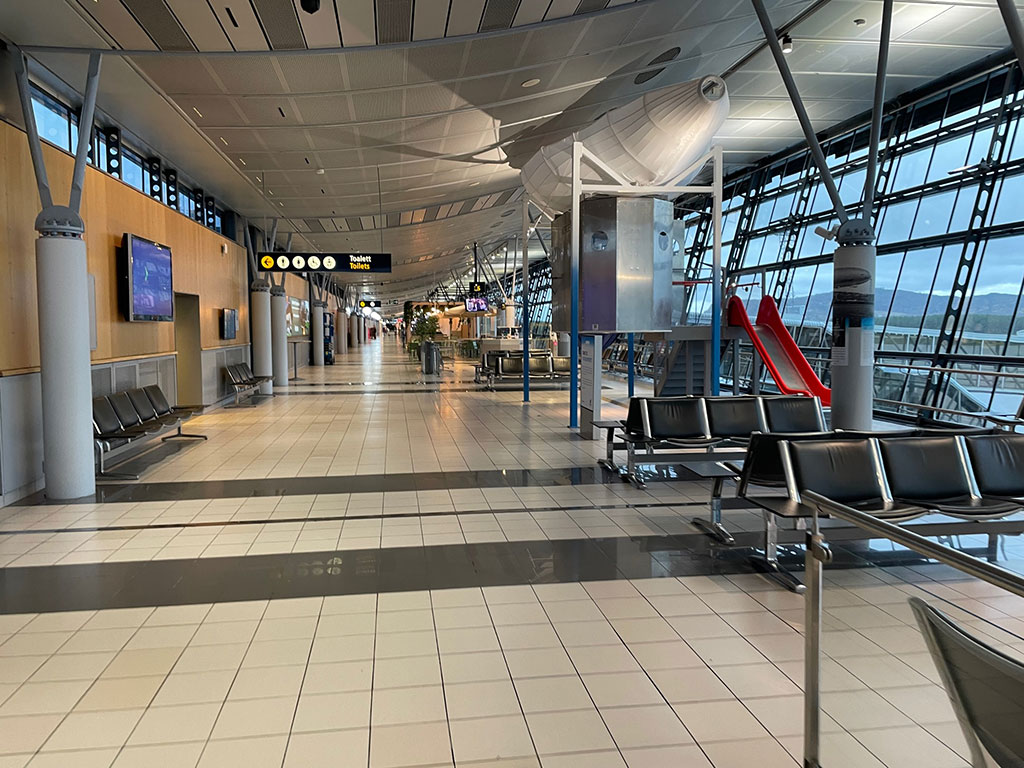 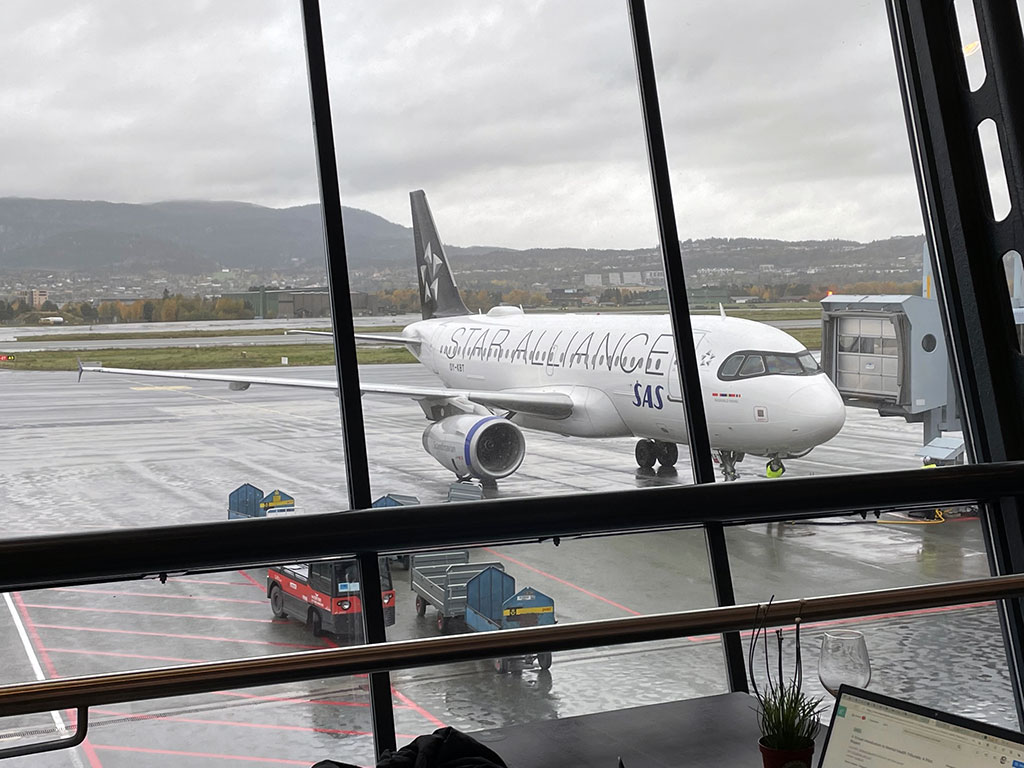 You can’t get into the International section without passing passport control, so I didn’t see this area.

I enjoyed a coffee and worked for a couple of hours with a good view of movements: plenty of SAS aircraft coming and going, plus KLM Cityhopper and a Babcock Beech King Air.

Trondheim is also a hub for Wideroe, which provides essential air services throughout Norway and links many of the remote communities in the north with connecting airports. This was the reason I was here today.

Instead of flying direct to Oslo with Norwegian, SAS or Flyr, I chose a 1-stop service from Trondheim with Wideroe which would hopefully bag me two new aircraft types. 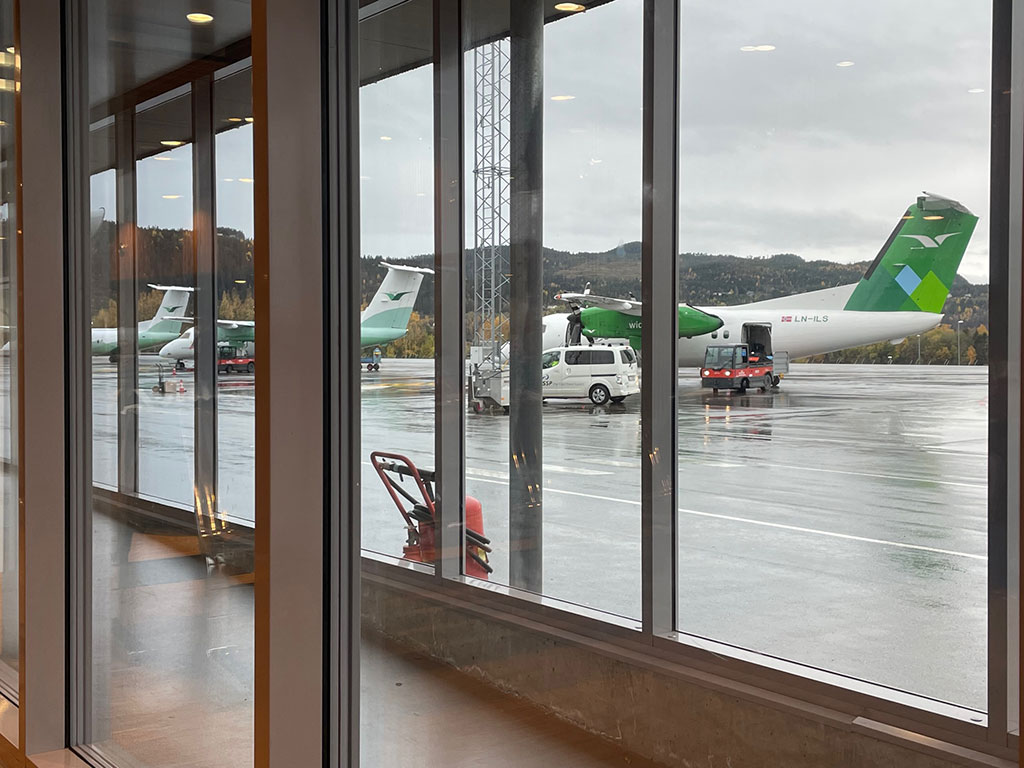 Close to my boarding time I walked to the downstairs gate area which Wideroe flights use, where passengers can walk out to the aircraft. The booking engine indicated this flight would be on board a DHC-8-300 “Dash 8” aircraft, which would be new to me (I’d only flown a Q400 before).

I watched various Wideroe flights come and go, and then right on cue a -300 pulled onto stand at my gate. 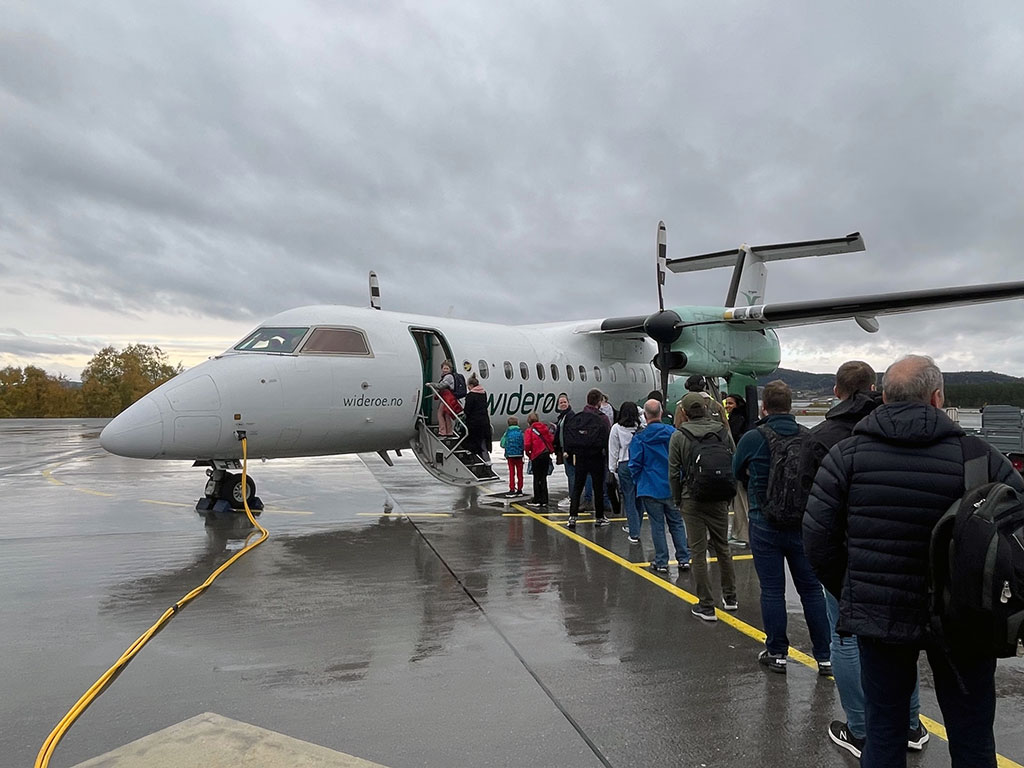 The passengers were ushered outside to line up at the steps awaiting boarding, which was a good opportunity for some photographs.

This aircraft was built in 1998 and had spent its whole life with Wideroe. I had a window seat assigned on this flight, which would take me to Bergen.

Most seats were taken, and there was a single flight attendant who worked hard on the one-hour service.

We taxied off to runway 27 and were airborne in no time, climbing away over the water before turning south over the orange and brown forests below. 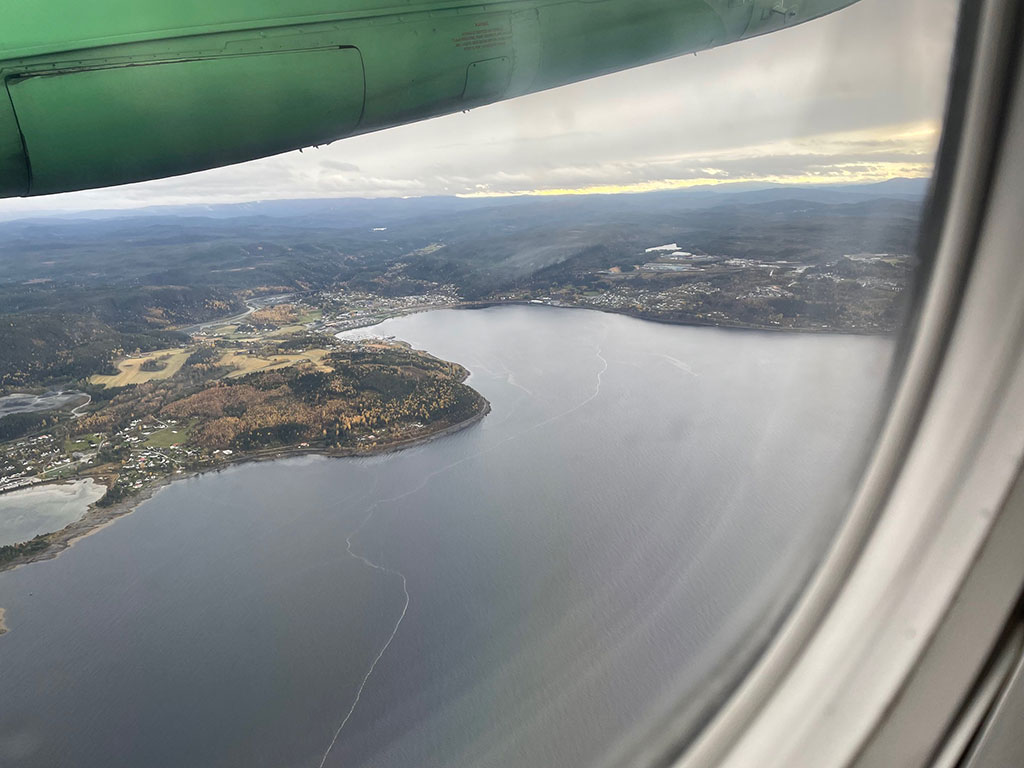 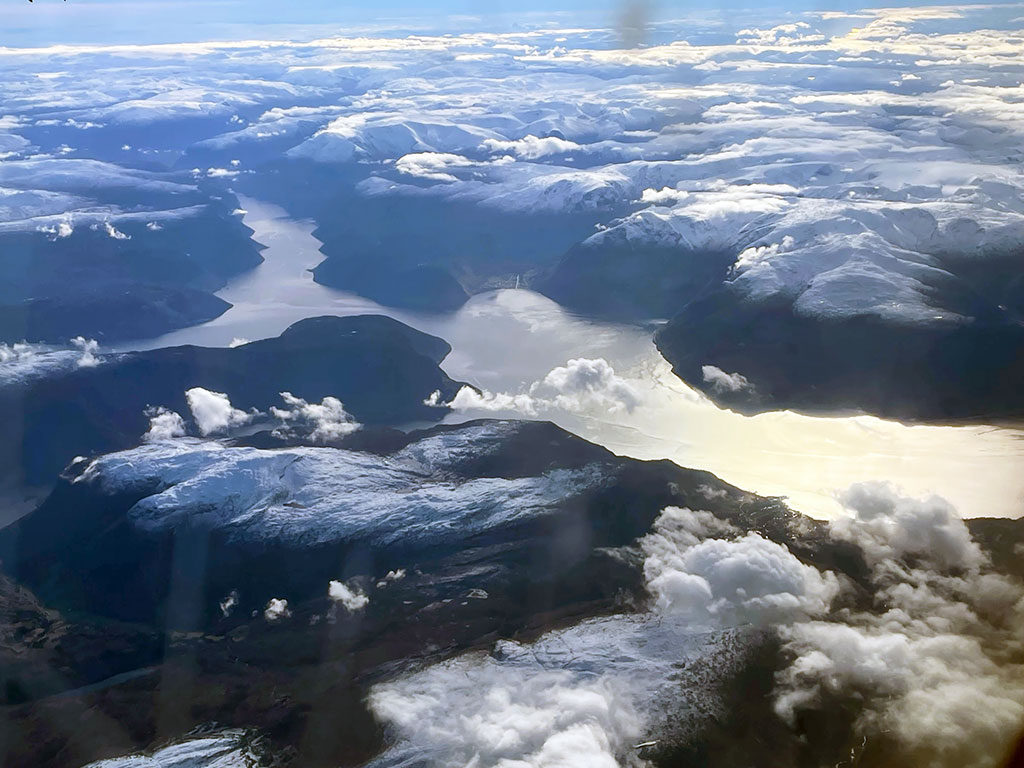 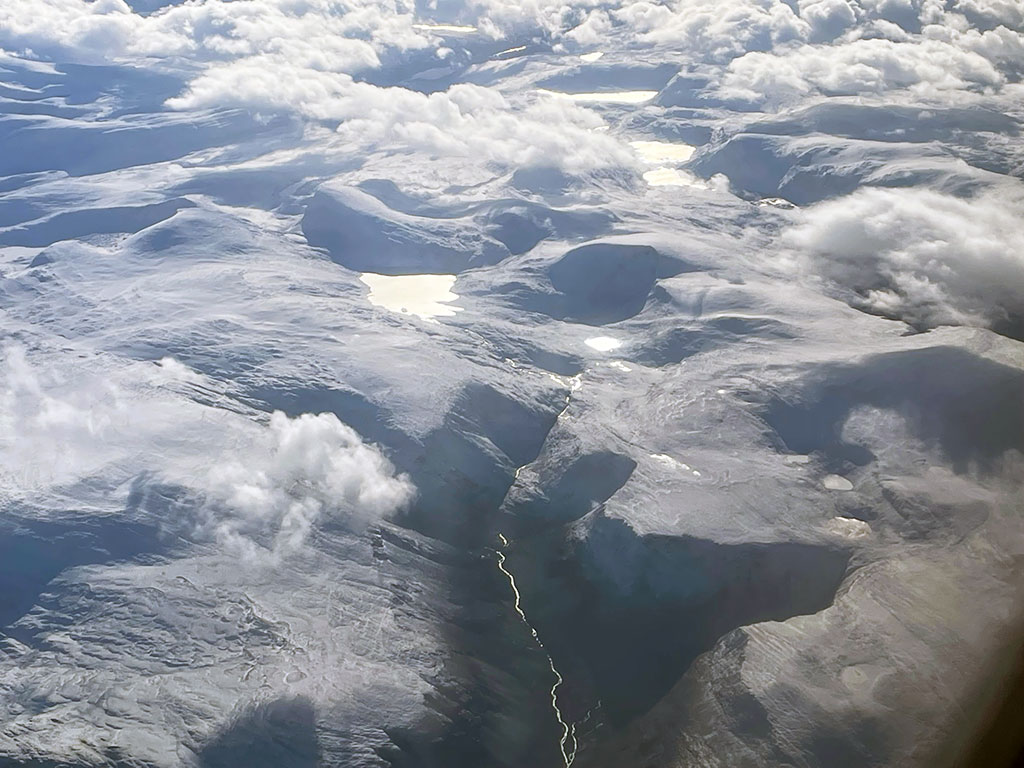 I hadn’t anticipated much of the flight, other than enjoying the new aircraft type to me. Yet it soon became apparent that this was a very scenic part of the world.

We passed over two national parks on our way down to Bergen which, for the most part, comprised mountain peaks and highlands covered in snow, and interspersed with lakes and fjords snaking inland. It was stunning and I barely took my eyes away from the window (apart from to enjoy the complimentary chocolate which was handed out).

Even the approach into Bergen was stunning, passing the city from the north as we turned onto final for runway 17.

On the ground it was a quick taxi to the gate, before alighting into the open air and walking up a staircase into the terminal. 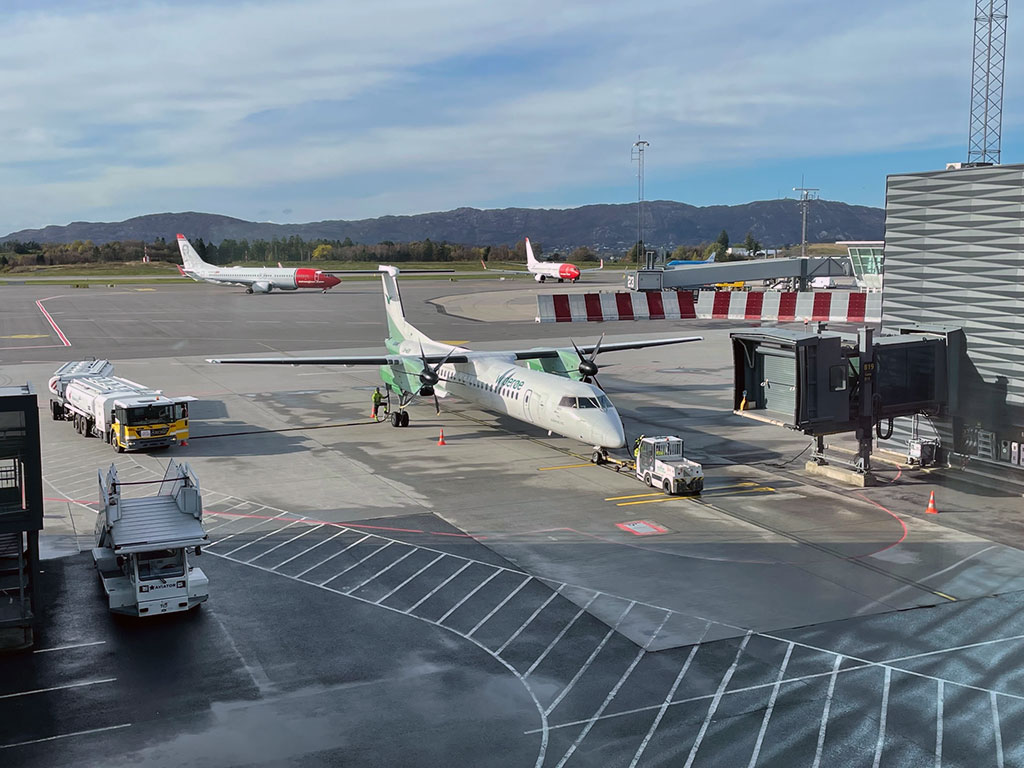 Again, this was a very modern building with shops, cafes and other outlets to enjoy, and large windows letting in lots of light, and letting out views onto the runway.

The terminal is split into domestic and international sections, and it was difficult to see the international gates from where I was, but all movements were visible on the runway so noting was missed that moved.

I even saw a couple of helicopter movements. Bergen is a busy hub for North Sea oil rig flights.

After three hours it was time for my next flight, having enjoyed my time at Bergen.

I didn’t have a seat assigned for this next one, so I made sure I was close to the boarding gate to ensure I got a window seat.

This leg was planned on the shortest Dash 8 variant, the -100, and as we walked down the steps I saw LN-WIU waiting – much smaller than the -300 we’d just been on, and a lot shorter than the Q400! 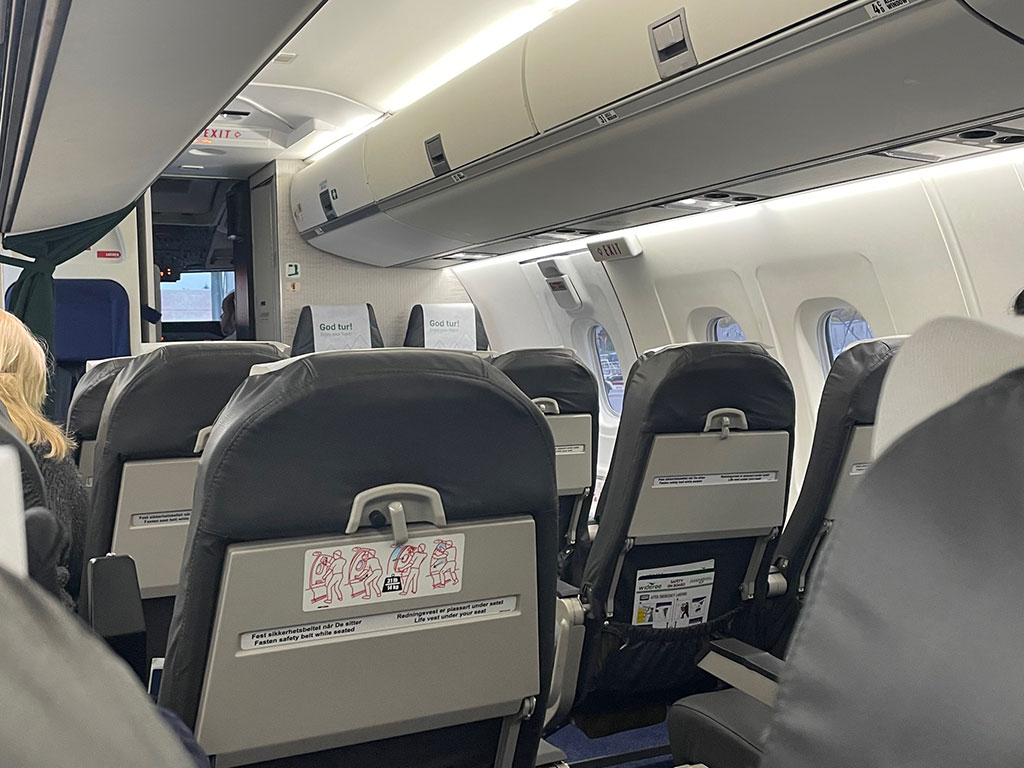 I was second to board and chose a window seat on the port side. This flight would take us to Oslo, again in around an hour.

We taxied out for a departure on runway 17 and made a turn to the east, with good sunset views over the coastline as we climbed. But since dark was setting in and the cloud was low, there was little else to see on this flight.

I ordered a beer from the cabin attendant, paying famous Norwegian prices for the privilege. But it was enjoyable. 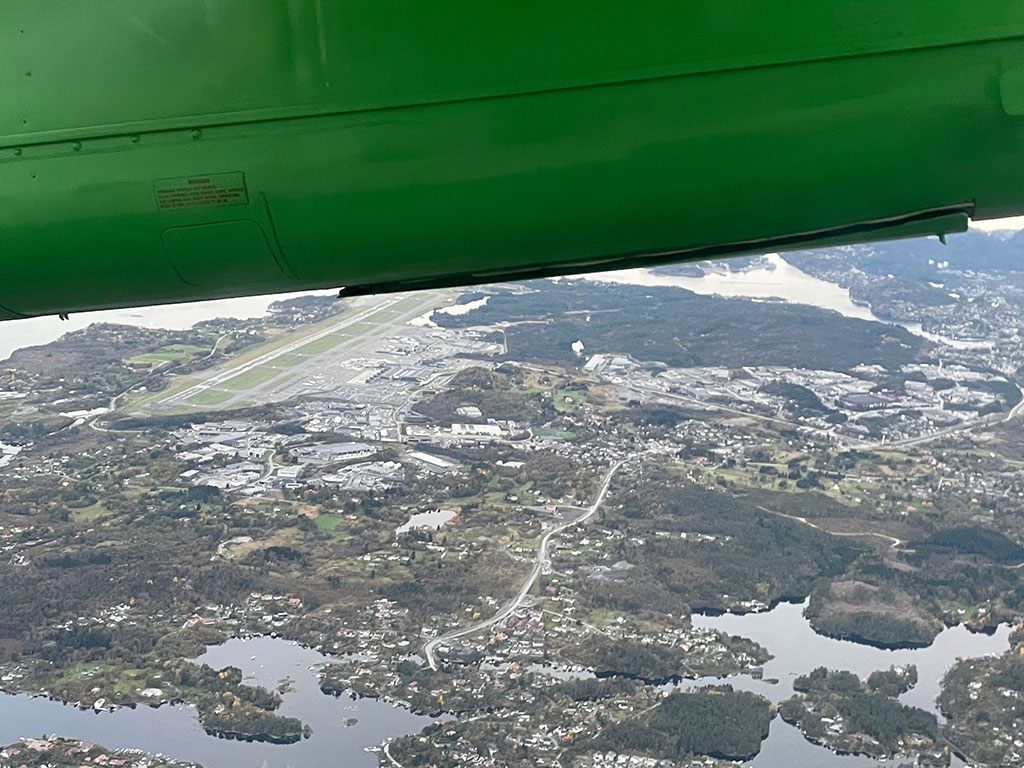 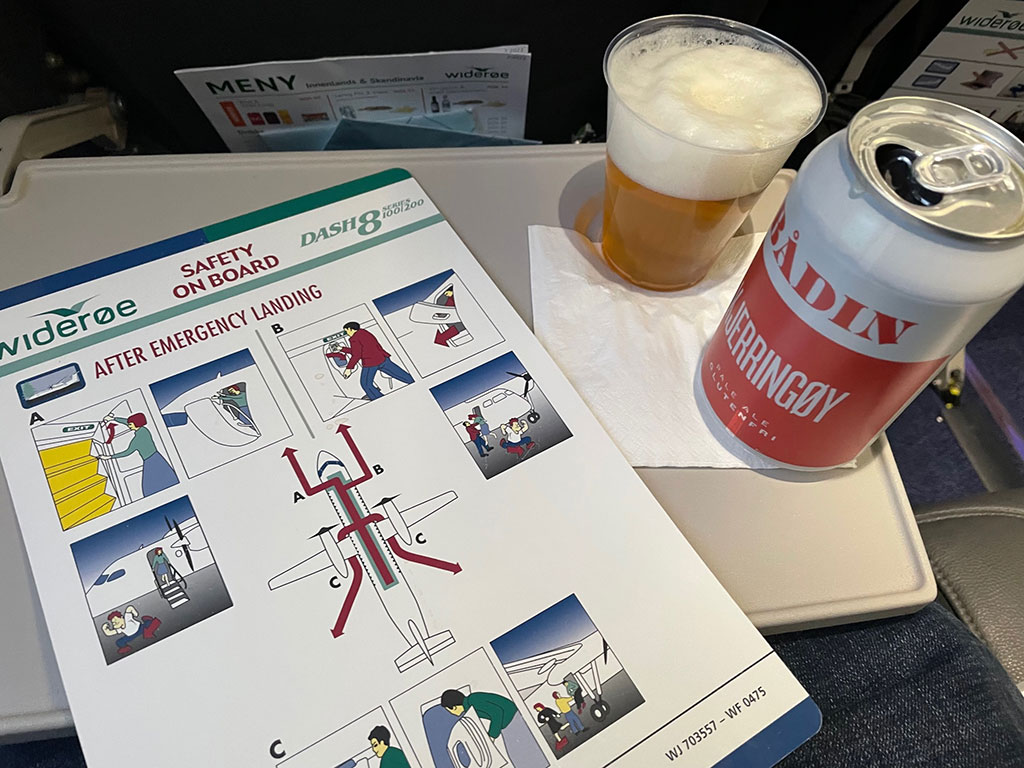 We approached Oslo Gardermoen from the north and landed on runway 19R, followed by a short taxi to a gate at the end of the domestic pier. 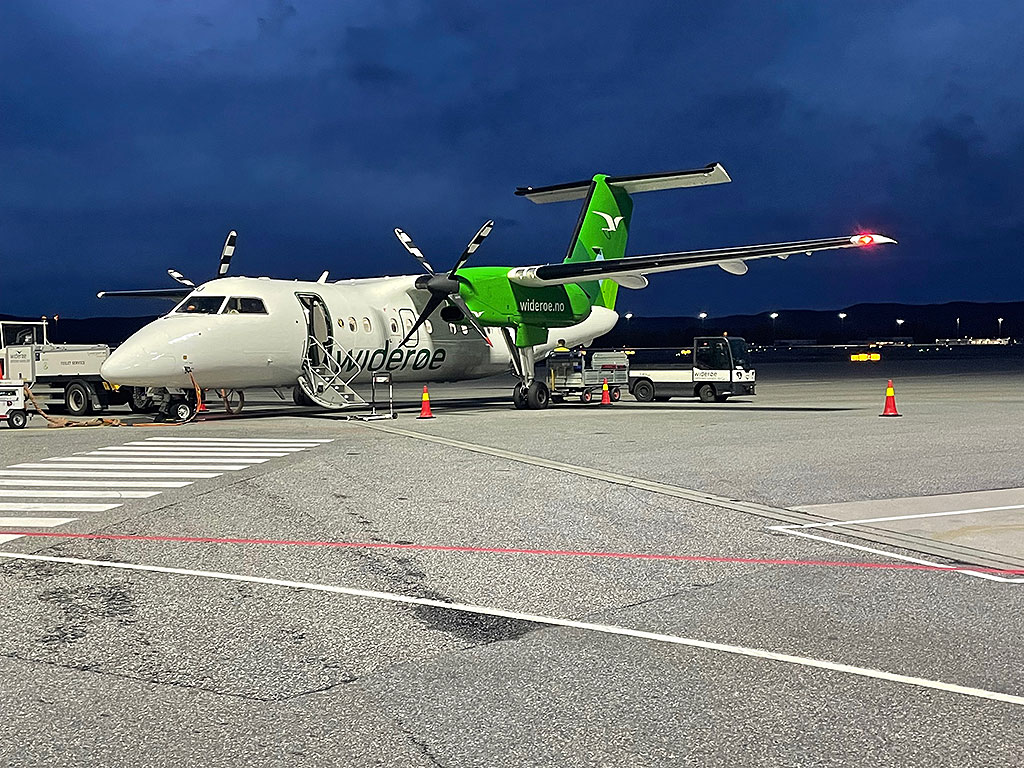 After deplaning it was a long walk to the baggage reclaim, where a few aircraft were seen parked at the gates – mostly Norwegian and SAS.

I was in no rush, and I wasn’t sure what the hotel might offer in terms of food, so I had a quick Burger King inside the arrivals hall, before heading out to the bus stands. 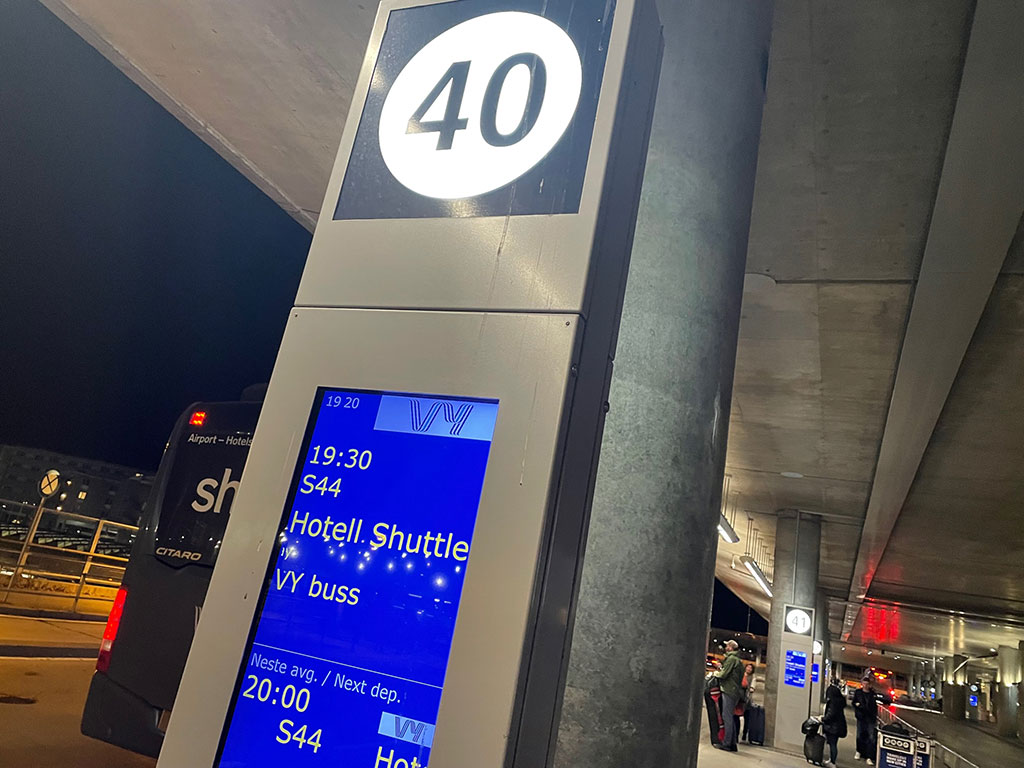 I was staying at the Comfort RunWay hotel on the south-west corner of the airfield (where a number of other hotels are located). The hotel shuttle bus S44 links the airport to the hotels in around 10 minutes, and costs 80Kr.

A tip I followed was to download the Vy app, add my credit card, and pay for all of my bus travel through that. It gives you plenty of options for routes and times, and you just show the driver the QR code to prove you’ve paid. This is a hotel which we’ve reviewed before, and is known as a spotting hotel at Oslo Gardermoen (the better, more central one is the RadissonBlu outside the terminal, but this was very expensive when I looked).

The Comfort RunWay is a modern, stylish hotel, with fairly basic rooms (along the lines of Ibis, CitizenM etc). It is situated on the airport perimeter overlooking runway 01L/19R, and I’d requested a runway view room, which was assigned.

However, the hotel is only four floors high and the trees between it and the airport have grown significantly since it was first built.

Therefore I had a limited view of the airport (from what I could see – it was dark when I arrived). I could see movements on both runways thankfully, so aircraft could be tied up using FlightRadar24.

Photography would be impossible, sadly, despite the proximity of some movements

After this long day, I watched movements for a while before retiring to bed to see what a full day would bring tomorrow.

Wideroe used to do a great value “Visit Norway” ticket offering unlimited travel on their network in the summer. Not offered since Covid but hopefully will be offered again.

Norway is my favourite country and have stayed at the Comfort Runway hotel before with my wife and daughter.

The Air Force Museum on the same side of OSL airport is also recommended, if time permits.

Yes, we love Norway and have had two visits there, luckily having friends in Stavanger who put us up. Have flown into SVG BY SAS B737-600 and OSL/CPH by Norwegian 737-300. Hope to do a return visit one day.