Trying Out airBaltic and Riga Airport, But No A220

An interesting option for me recently when looking to fly from Frankfurt, Germany to Lviv in Ukraine was with airBaltic, changing aircraft in Riga.

The price was comparable with the alternative Lufthansa option, and according to the schedule would get me my first Airbus A220 flight. 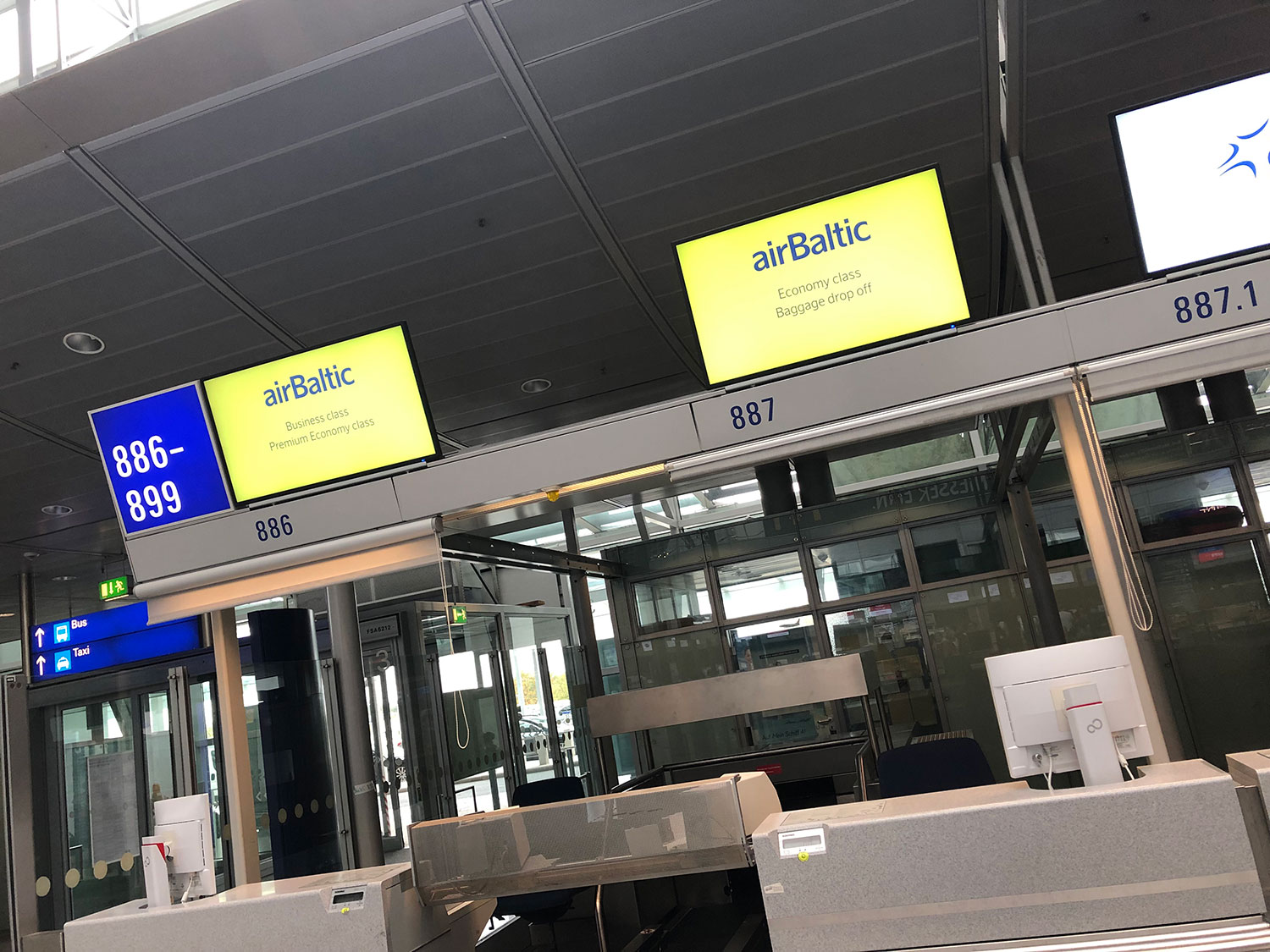 airBaltic operates out of Frankfurt’s Terminal 2, so after some time on the viewing terrace I checked in and made my way through to departures.

Frankfurt really needs to up its game in Terminal 2. Once in the departure area, there is very little in the way of places to shop, eat and drink – just a small café, Duty Free shop and newsagent, plus a coffee stall. Compare this to Terminal 1 which has lots of concessions to enjoy.

Plus, for #avgeeks the views of the aircraft action in Terminal 2 are not very good.

As I sat charging my phone, a quick check of Flightradar24 confirmed that I would be disappointed by my first A220 flight – it had been substituted for an older Boeing 737-500. My first A220 trip will have to wait. 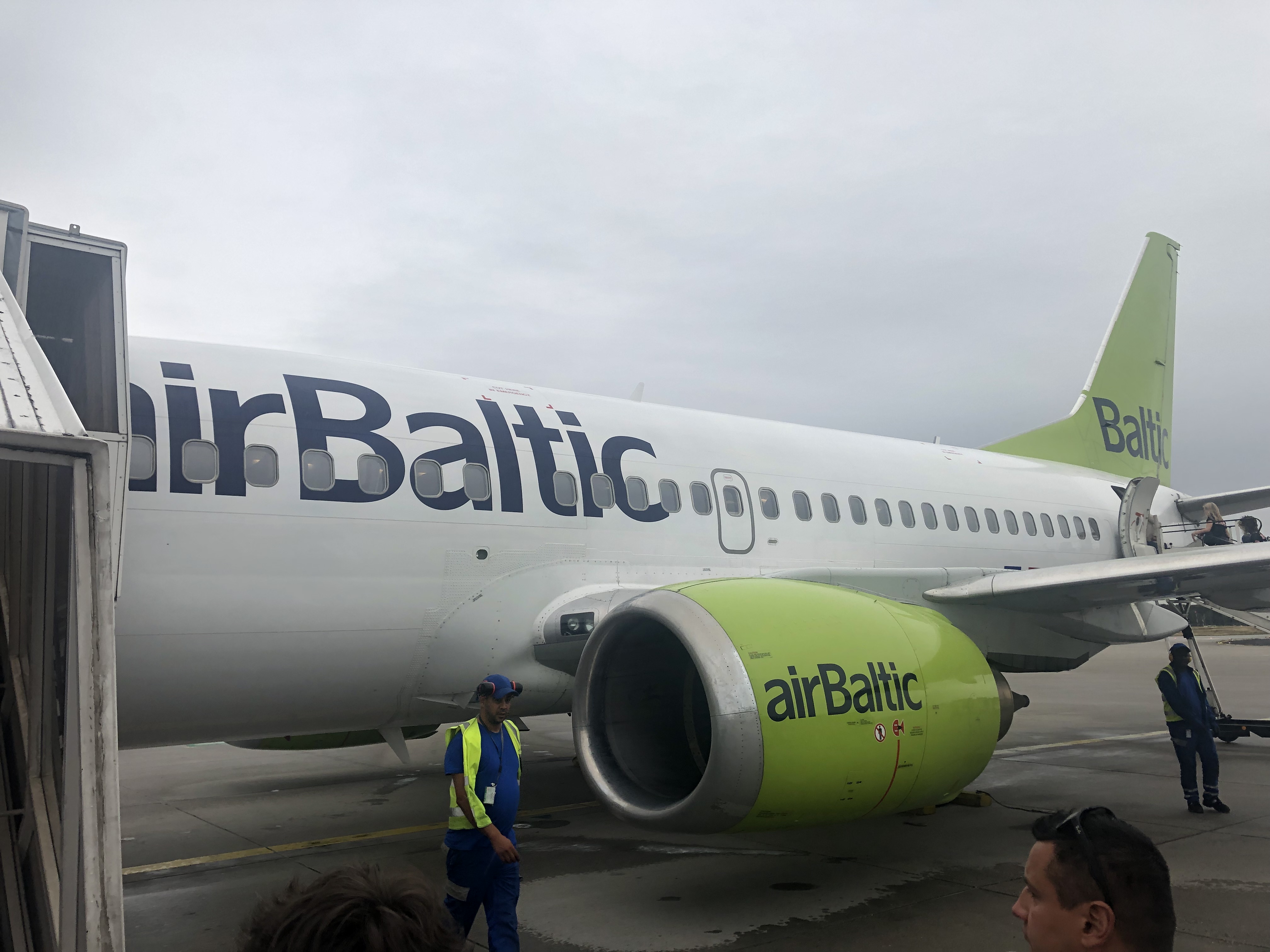 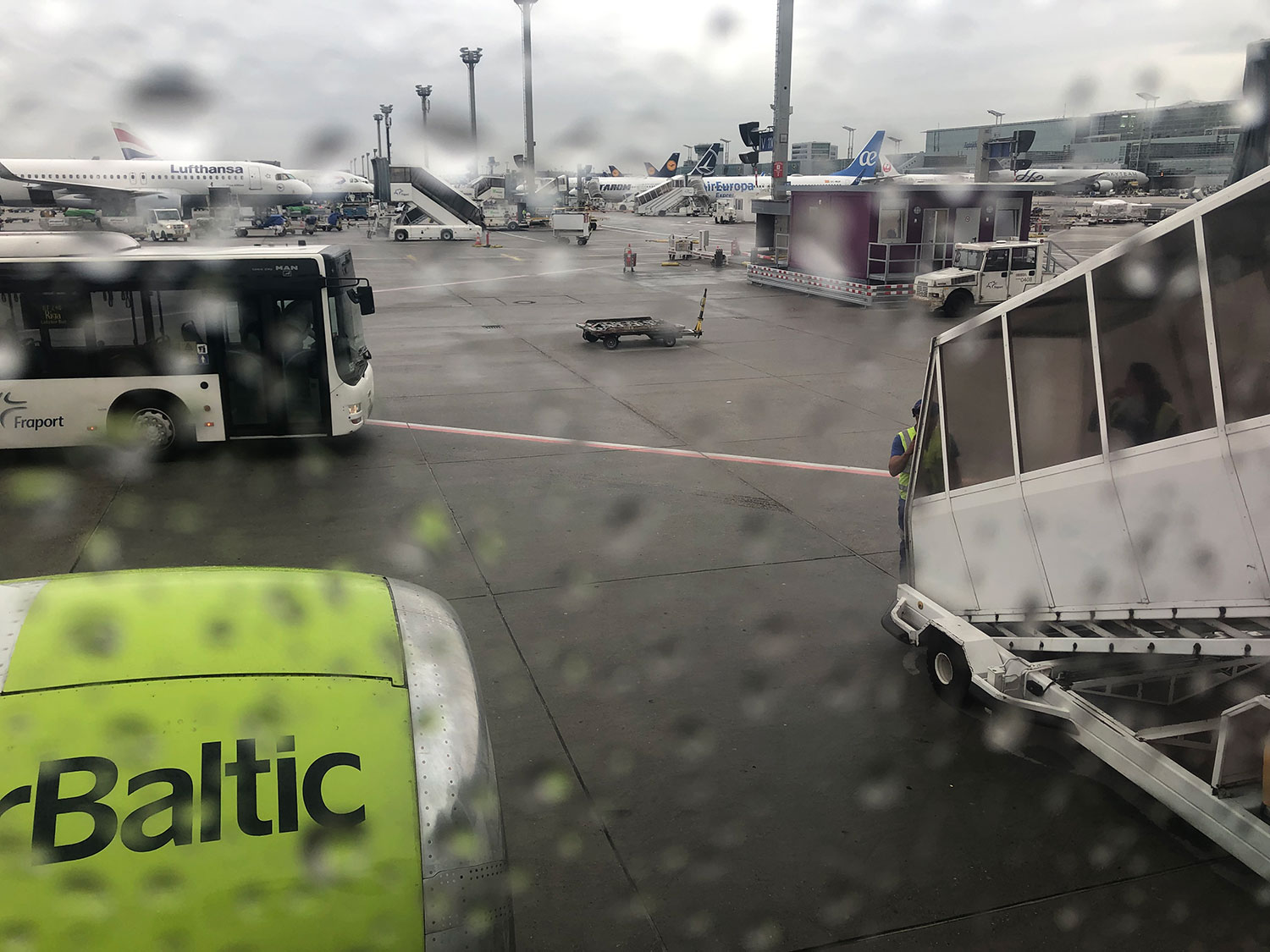 Boarding was via bus, so we got a mini tour of the apron at Frankfurt, where a mix of full service, low-cost and leisure airlines were parked up during this evening’s rush hour.

While airBaltic is planning to retire its fleet of Boeing 737-300 and -500 classics soon, the aircraft (YL-BBD, built in 1999 for Air France) certainly didn’t feel old onboard.

I had a window seat and loved the view of the green engine beside me, with airBaltic titles to remind us who we were flying.

I used to fly 737-500s a lot when they flew into my local airport, so at the very least it was a trip down memory lane. I’m sure it’s unlikely I’ll ever fly one again. 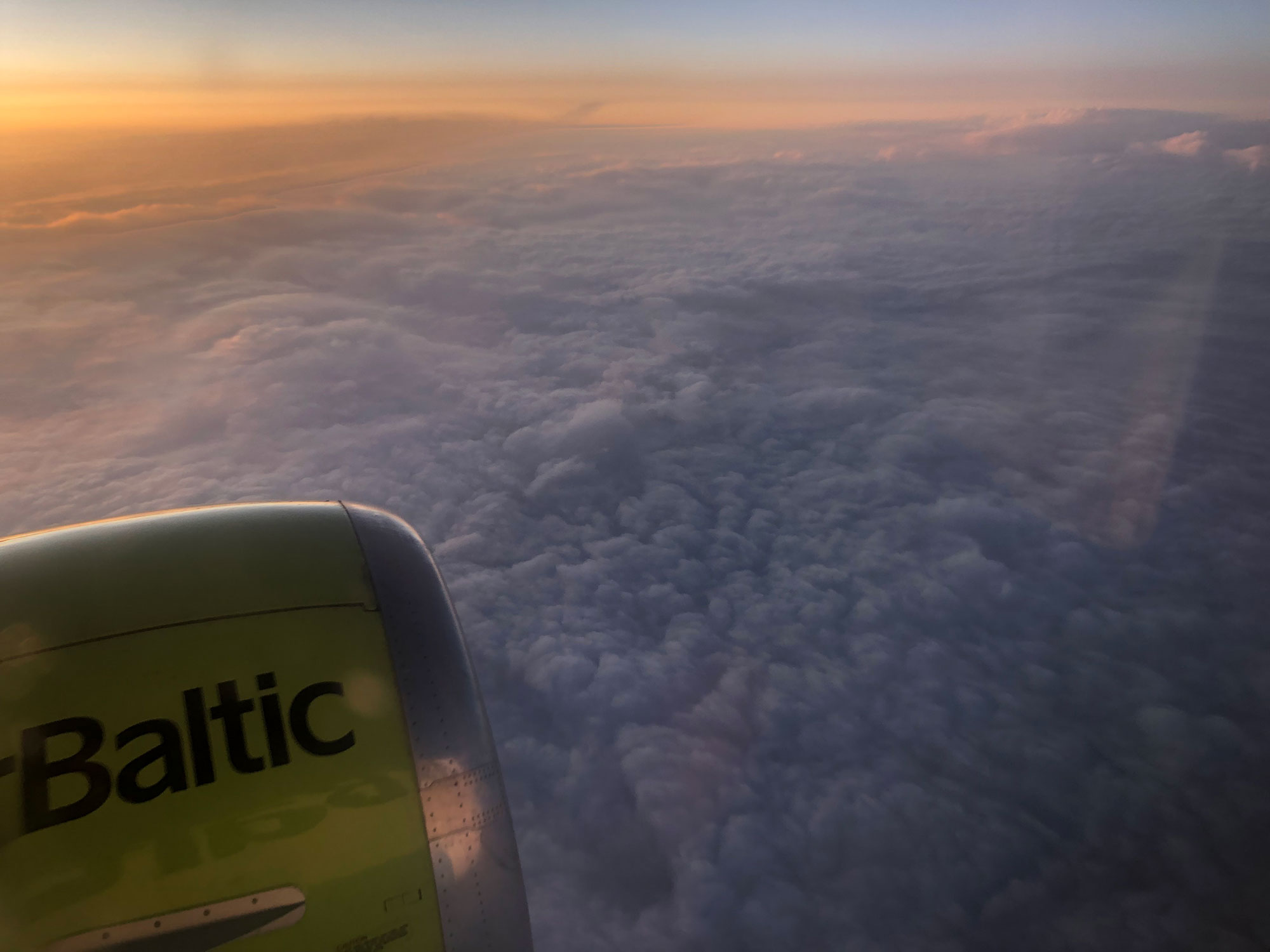 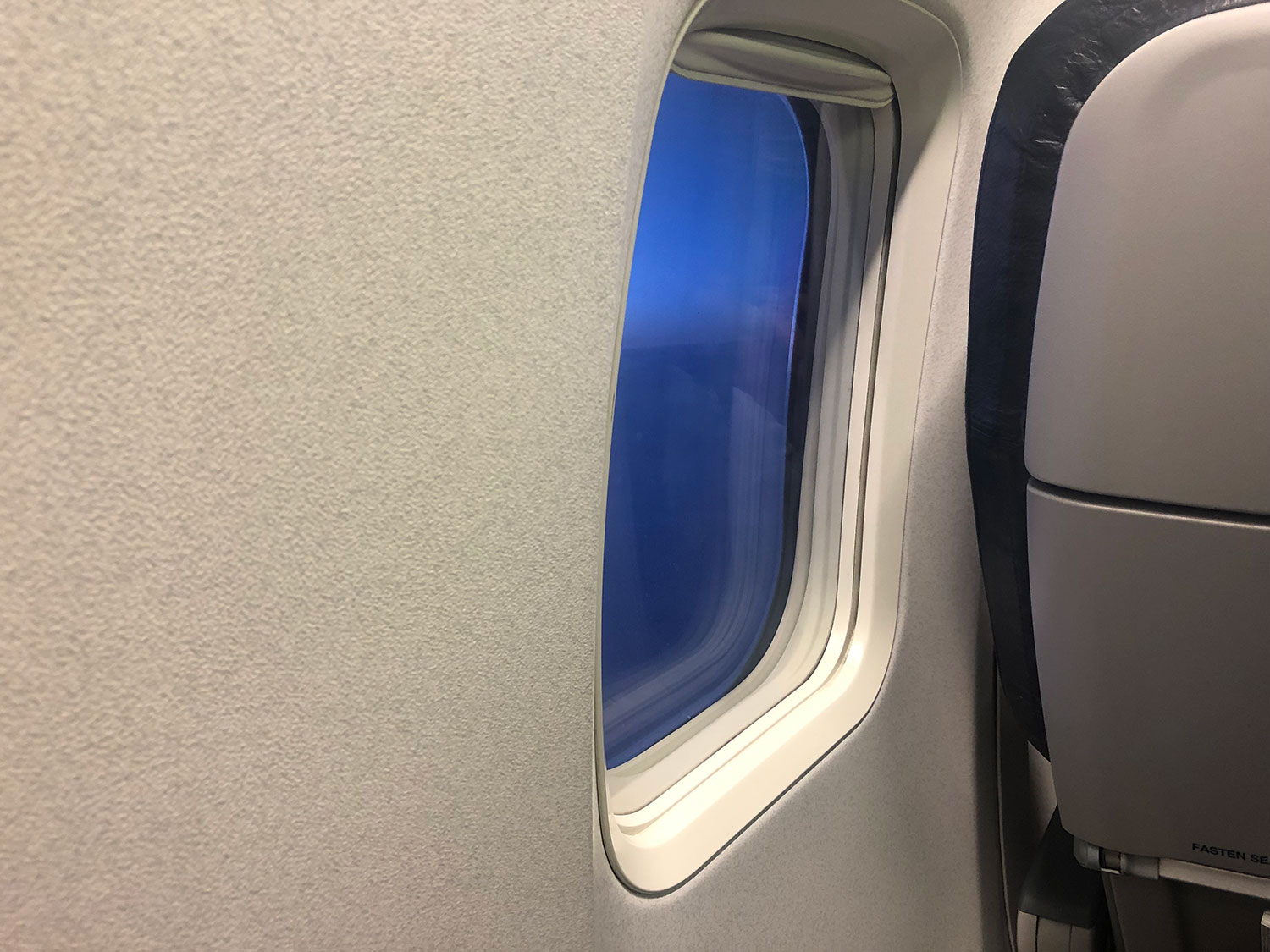 The flight took us up over northern Germany and Poland as the sun set outside and darkness fell. After just under 2 hours we descended into Riga, with a view of the city out of the window – including some firework displays as we approached!

Again we parked at a remote stand, so it was a bus to the terminal which was useful for seeing some of the aircraft parked on remote stands. Most passengers were heading to baggage claim, but I followed signs for flight connections.

I was immediately impressed by this modern, attractive terminal. It feels a lot like those in Scandinavia, and was so much better than Frankfurt! There were bars, cafes, restaurants and shops at regular intervals. Perfect for grabbing a snack as I hadn’t really eaten anything for dinner. 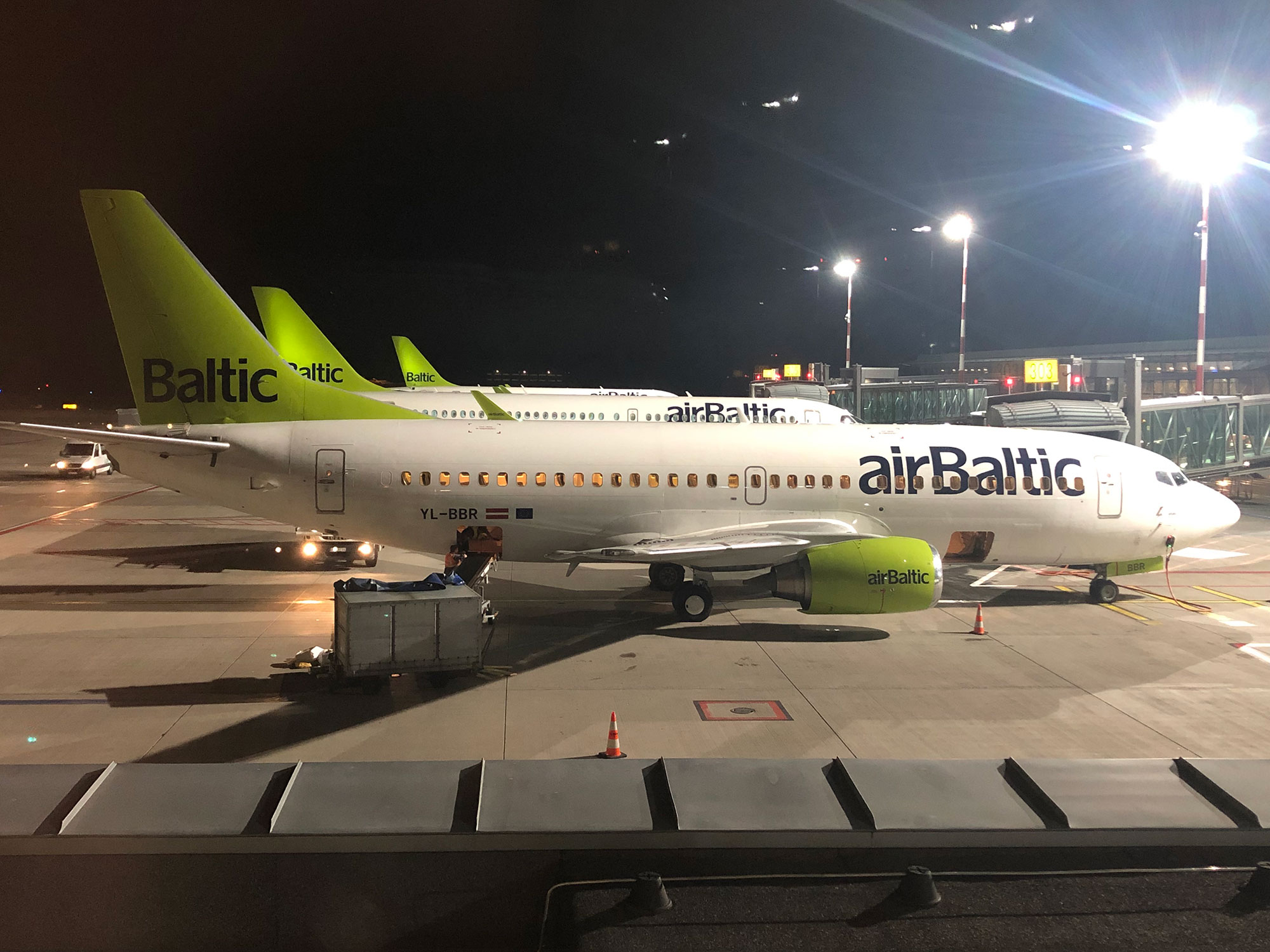 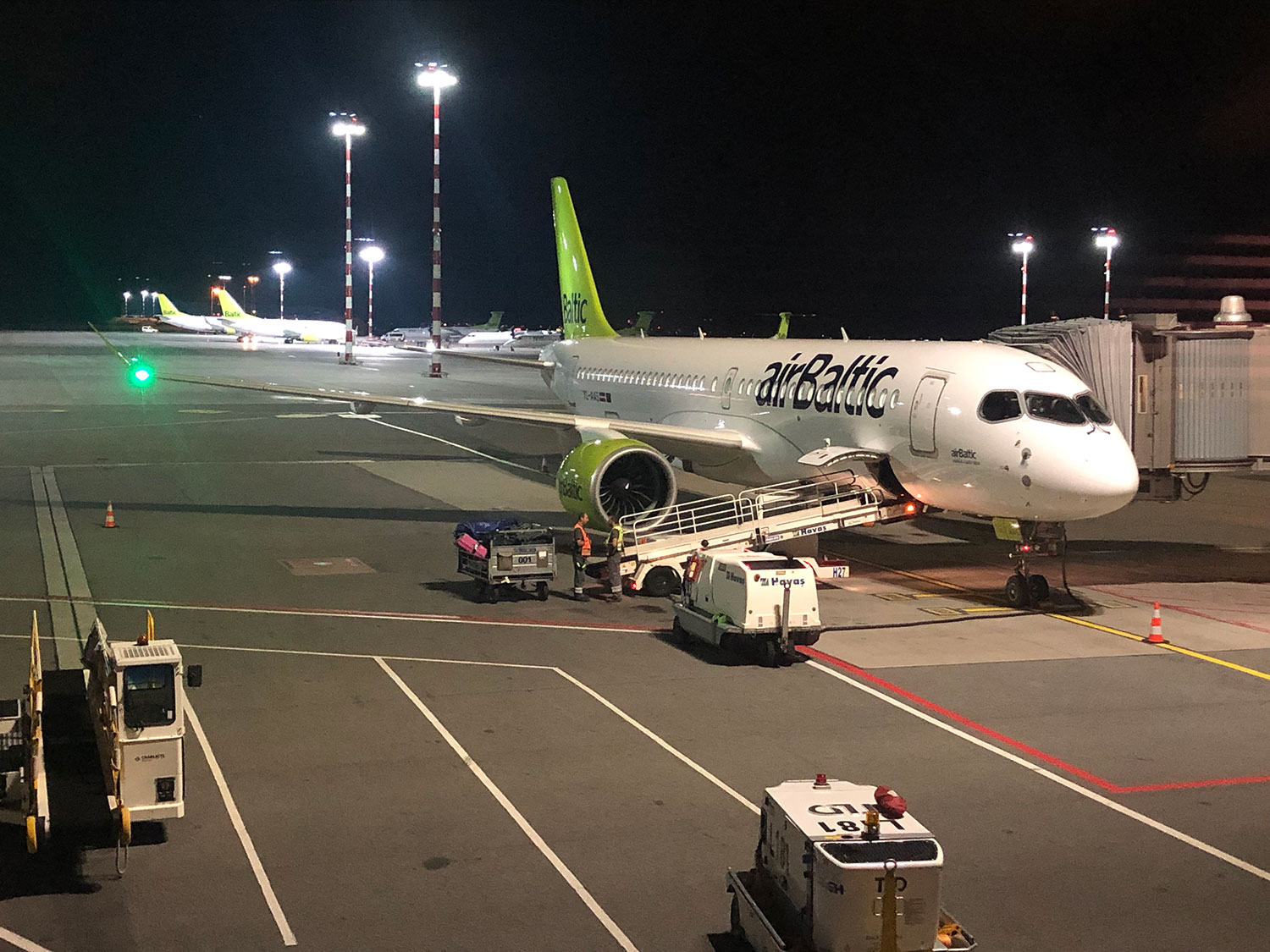 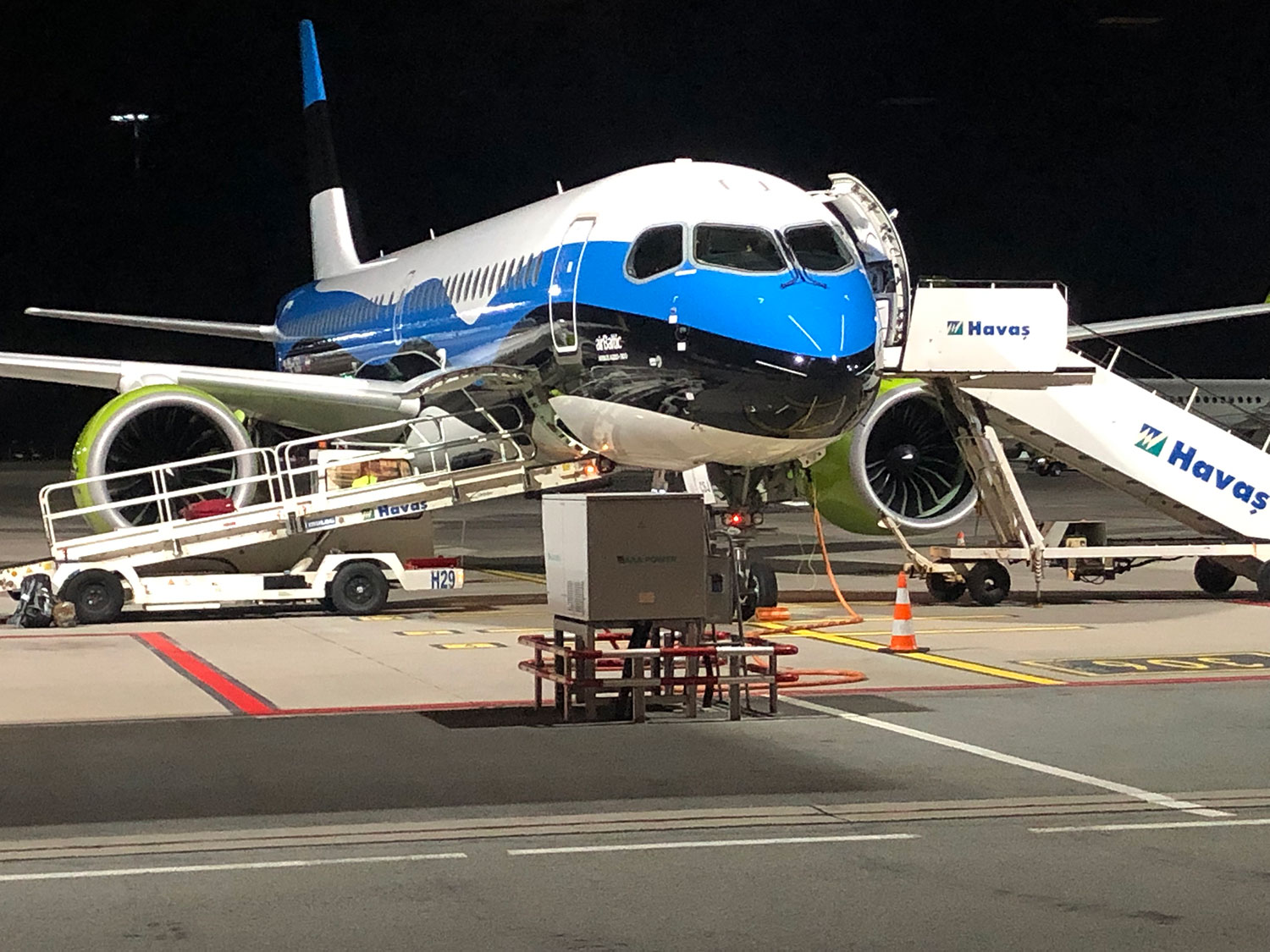 There are two piers in the terminal, so I wandered along both, noting the many airBaltic aircraft parked up (including two of the special flag-livery A220s – it would’ve been nice to fly one of those!).

It’s quite surprising that there’s such a large a wave of late-night departures from Riga. My own onward flight was scheduled for 23:50 departure, which I felt was pretty late!

I passed through passport control into the non-Schengen area, which was downstairs at the end of the northern pier. Down here I still had a good view of the runway, but it was dark so I needed to keep an eye on Flightradar24. 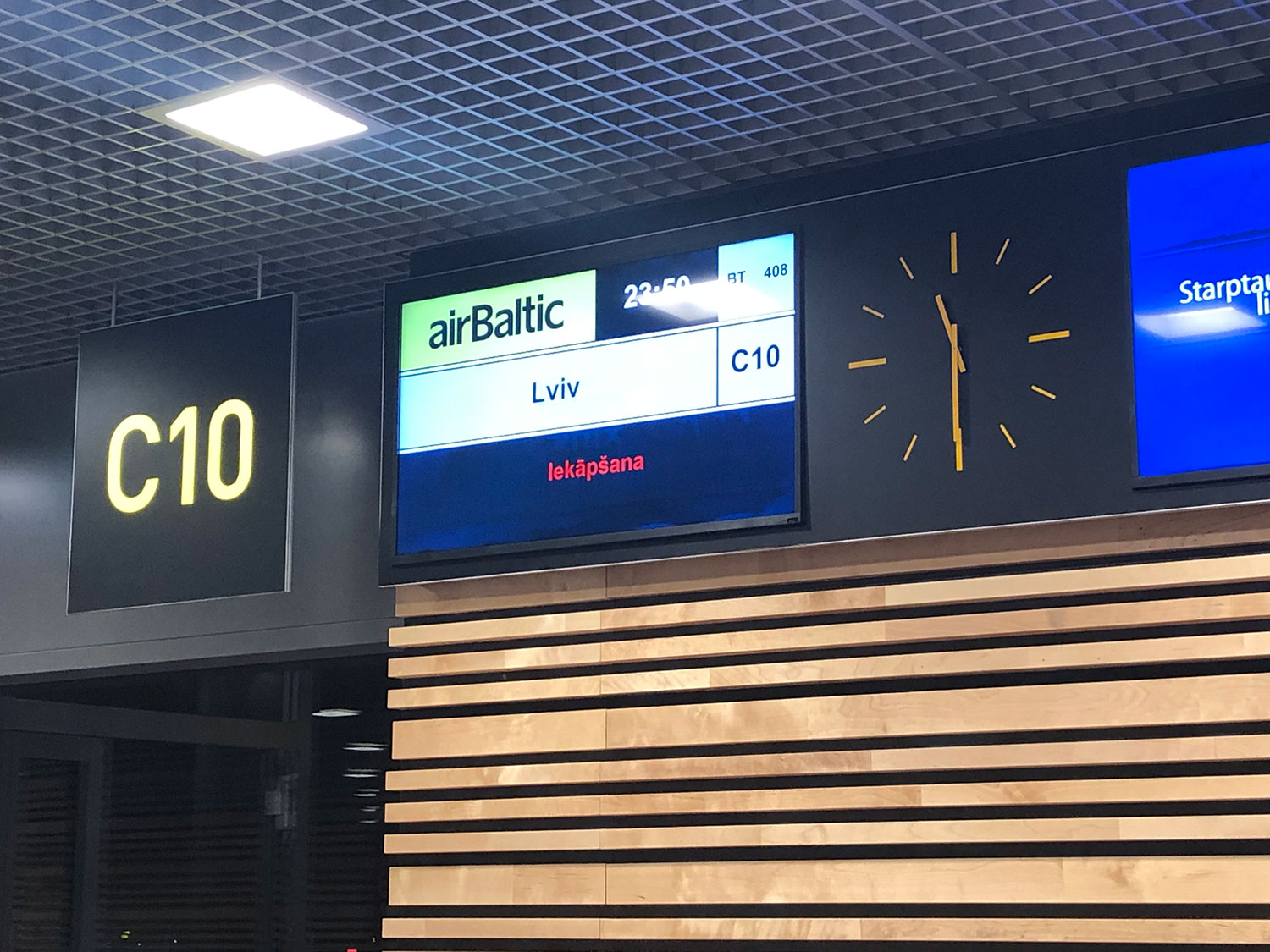 My next flight was aboard a de Havilland Canada DHC-8 Q400NG, YL-BAE, which WAS a new type for me. So at least there were some successes on this trip!

It felt pretty late to be flying, but I managed to take some pictures, and on departure noted the various stored and retired airliners on the opposite side of the runway lurking in the dark. 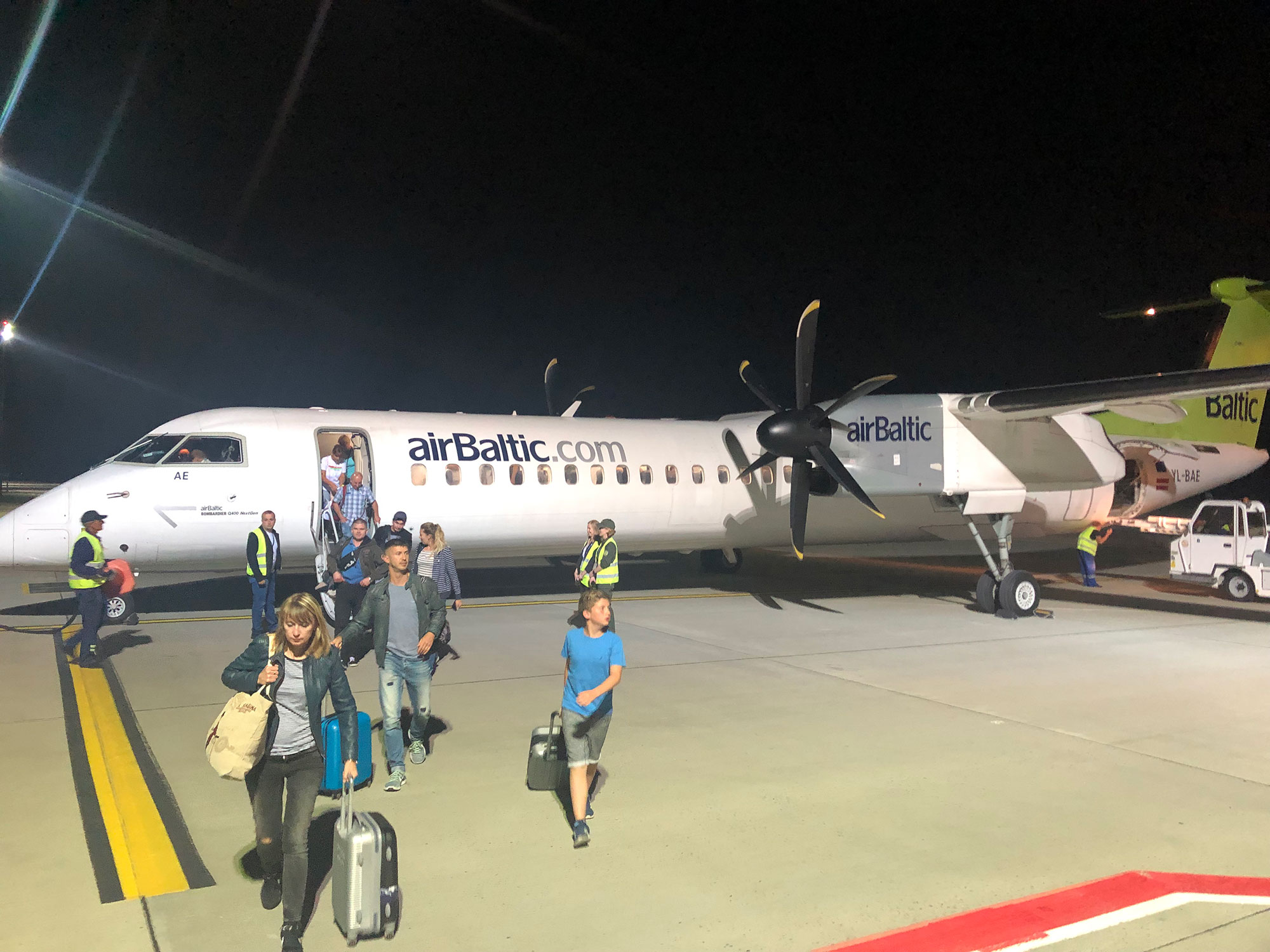 At this late hour, the vibration of the turboprop engine next to me lulled me to sleep for most of the 2-hour flight. But as with the earlier flight, the service and comfort levels were great and I felt airBaltic were a good, solid airline to travel on.

We landed in Lviv around 1.30am local time, parking up close to a EuroLOT livery Q400 – the only other aircraft at the modern terminal. My thoughts were now only on sleep, and thankfully passport control was swift, with my hotel’s driver waiting for me outside.

Overall this was a great experience. To most, it doesn’t matter what aircraft type is used as long as it’s comfortable, and the 737 Classic certainly didn’t feel old.

Flying the Q400 for the first time was also great. airBaltic will be retiring this type from its fleet soon, too.

Hopefully I’ll be able to try out an airBaltic A220 another day. I’ve heard great things about the aircraft, and how it’s helping the airline grow dramatically and turn a profit.

The Irkut MC-21 Debut at MAKS and Customer Orders

[…] post Trying Out airBaltic and Riga Airport, But No A220 appeared first on Airport Spotting […]

[…] [Read my airBaltic trip report from Frankfurt to Lviv via Riga] […]