The Twilight Years of the 747. Where to See Them (and Fly Them!)

The Queen of the Skies, Jumbo Jet, Lump or whatever else you wish to call the Boeing 747 is sadly turning into a dying breed… which is a strange thing to say considering the type is still in production in its latest -8 guise.

Yet the iconic airliner which first flew in the 1960s and revolutionised air travel for airlines and passengers is nowhere near as popular or numerous as it once was, and airlines are steadily retiring their aircraft in favour of more modern and efficient twin-jet aircraft like the 777, 787 and Airbus A350. Martin Bowman put plenty of research and effort into creating a definitive history of the Boeing 747 in his recent book Boeing 747 A History, which was released to celebrate the type’s 50th anniversary in 2017.

You can read our review of the book here If you’re hoping to get a flight on a jumbo, you’re gonna have to act fairly fast – especially if you want to fly on one of the remaining -400 models.

747-8s are still in service with Lufthansa, Air China, Korean Air carrying passengers, whilst cargo and VIP versions are also quite plentiful . So you’ve got plenty of years left to try them out (I hope!).

Airlines still flying the passenger 747-400 include: Are any classic 747s still flying? Only Iran Air’s Boeing 747SP still flies occasionally with passengers, and Mahan Air has two 747-300s in its fleet. Both are unlikely to be around much longer.

Remaining -100 and -200 examples are only used by a few cargo and military operators. They have become very rare!

Many of the older Boeing 747s have found there way into museums so the public and enthusiasts can still enjoy them, thankfully.

The prototype 747 still exists, wearing its original colour scheme. Visit it at the excellent Museum of Flight, where it sits among other Boeing prototypes.

A former Air France classic jumbo is on display at the Museum of Air and Space near Paris. You can go inside. At the Aviodrome museum in Lelystad, Netherlands, is this original KLM classic which features the Stretched Upper Deck.

Visit the only surviving 747-200 with Rolls Royce engines at this museum in Longreach, Australia.

The prototype Boeing 747-400 was retired to the Delta Flight Museum next to Hartsfield Jackson Airport recently, where you can go on board and experience this huge jet. 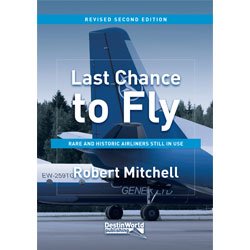 Our new book, Last Chance to Fly lists options for flying on classic Boeing 747 models, like the -300, as well as many other rare and historic aircraft types.

If you love to fly on older aircraft, give it a try. Click here: https://destinworld.com/product/last-chance-to-fly/

THERE IS AN EX QANTAS B747-400 VH-OJA AT ALBION PARK AIRPORT JUST SOUTH OF SYDNEY.
WAS FLOWN IN 8TH MARCH 2015, FULLY INTACT AND OPEN TO THE PUBLIC.
THIS WAS QANTAS’S FIRST 400 SERIES AND HOLDS THE RECORD FOR LHR/SYD DIRECT AUG 1989.

I have been on board this aircraft.