Spotting isn’t just standing behind a fence or in a designated spotters’ area, it can provide the opportunity for a unique experience.

As a spotter they’ll often have interesting aircraft and locations to enjoy.

As a passenger flying into them, it’s often the chance to witness difficult approaches, landings and take-offs. 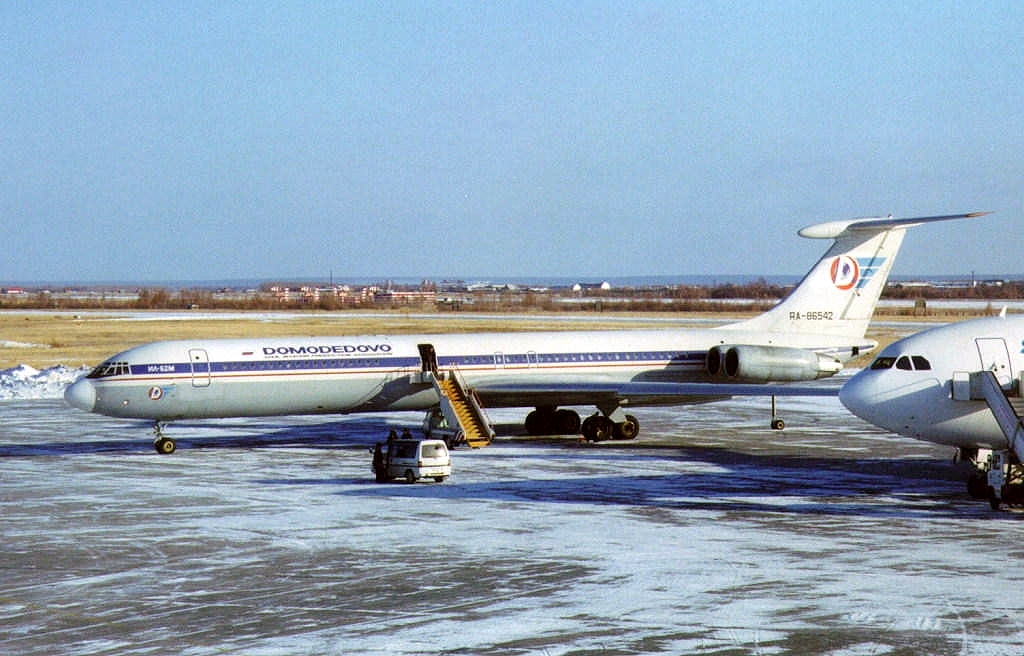 Is this the coldest airport on earth? Due to its location, winter temperatures can plummet to -50 degrees Celsius. Yakutsk is situated in an area famous for diamonds, gold, animal furs and rich mineral deposits.

Due to the extreme climate, the only year-round transport option is flying. All types of aircraft can land here regardless of maximum take-off weight.

For six months from August 2000, the FAA and Boeing together with international airline representatives conducted rigorous tests to ascertain whether the airport could be used for emergency landings. Meeting the required standards, the European Union and Airbus began their own study.

Services are operated by national airlines only, with their varied fleets of Boeing, Airbus and locally built aircraft. Aeroflot and S7 the major carriers.

A café bar “Polchasa Do Reisa” has a panoramic view of the runway and unlimited access to the terrace. Having a beer here is a real treat for the enthusiast, photography is allowed although best to check before travelling. 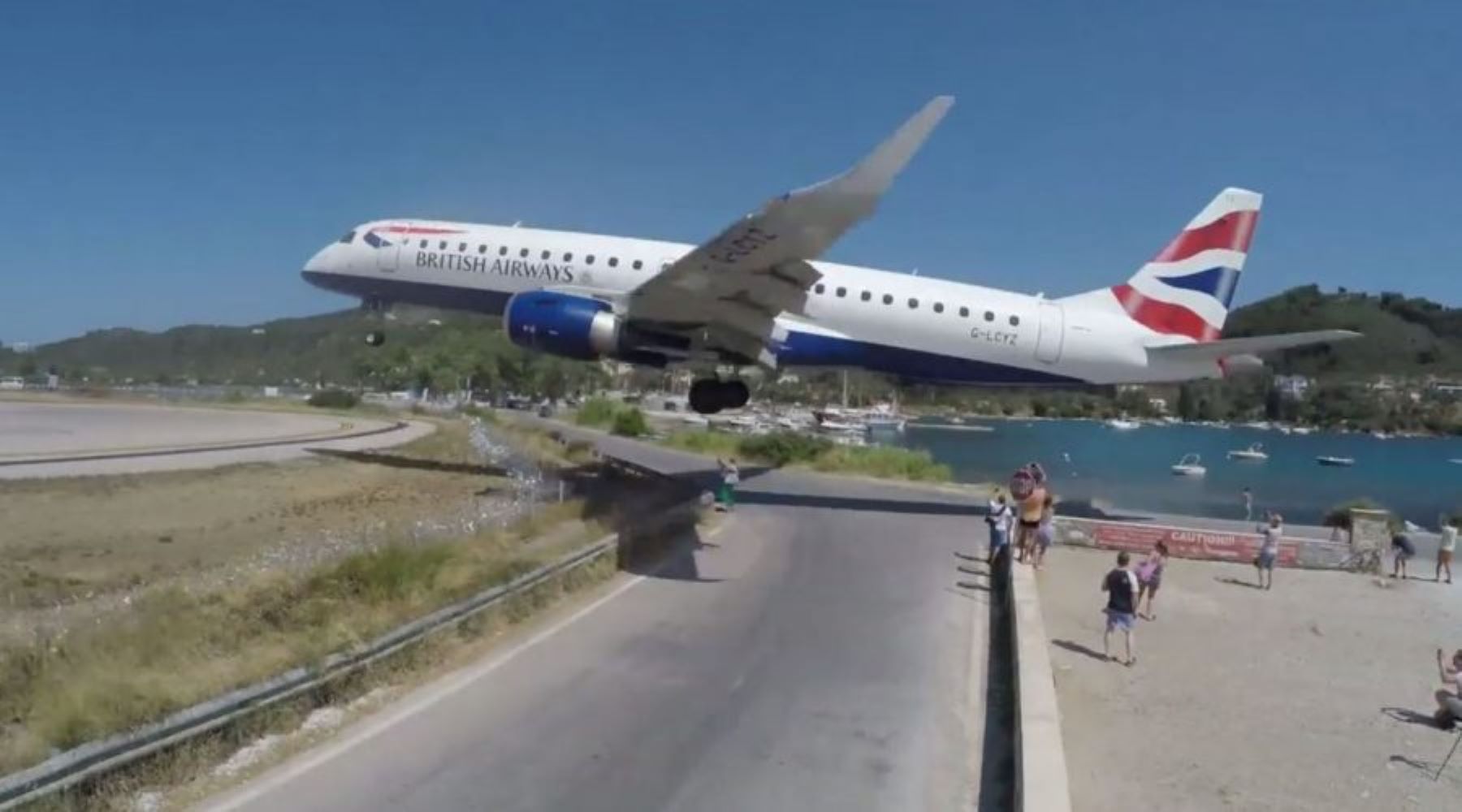 Dubbed the Sint Maarten of Europe, Skiathos is very popular with holidaying spotters, due to its close proximity to a public road.

With most traffic being seasonal, summer is the best time to visit. The only year-round service is from Athens.

Situated 10-15 minutes’ drive from Skiathos Town, adjacent to a small harbour with ample car parking and a taverna. The car park perimeter wall provides height for taking photos and a standing position for thrill seekers. Signage warns of the dangers of jet blast, which can also buckle car doors and rear hatches.

Due to its compact size, the largest aircraft permitted is the Boeing 757, and lots of reverse thrust is necessary! In 2019, this BA Embraer 190 was filmed just metres above spotters’ heads prompting the question “is this the lowest landing approach ever?” 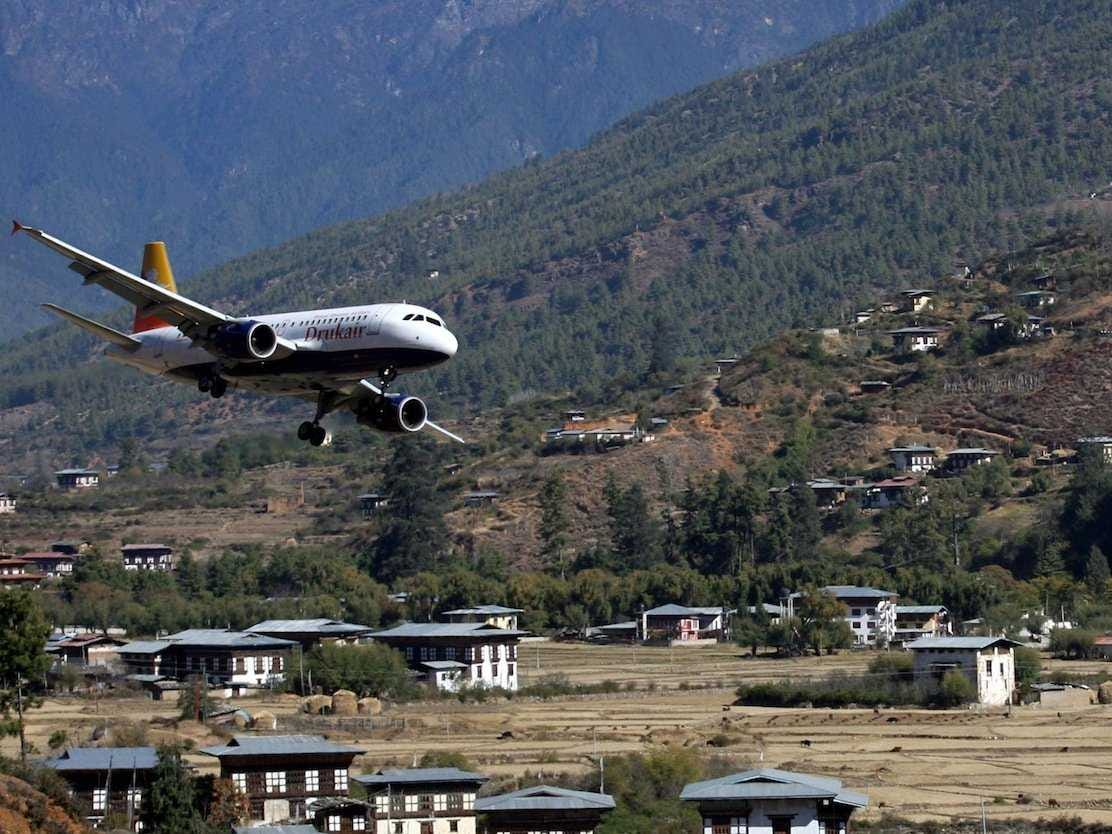 One photo cannot do it justice! Situated in the tiny Himalayan kingdom of Bhutan, Paro International lies 7,332 feet above sea level, in a deep valley close to the River Paro Chhu. Surrounded by mountains up to 15,000 feet high, it operates visual meteorological conditions during daylight hours only.

Druk Air–Royal Bhutan Airlines operates scheduled services using ATR42, A319 and A320. For a new aircraft’s first flight into Paro the time of landing, number of passengers on board and direction of apron parking are all determined by the High Lama of Paro Dzong.

Due to its location, only a small number of pilots are certified to operate there. The runway only becomes visible at 500 feet, after descent through many winding valleys. The devout Buddhist captains pray at the start of each descent; luckily in the confines of the flightdeck! 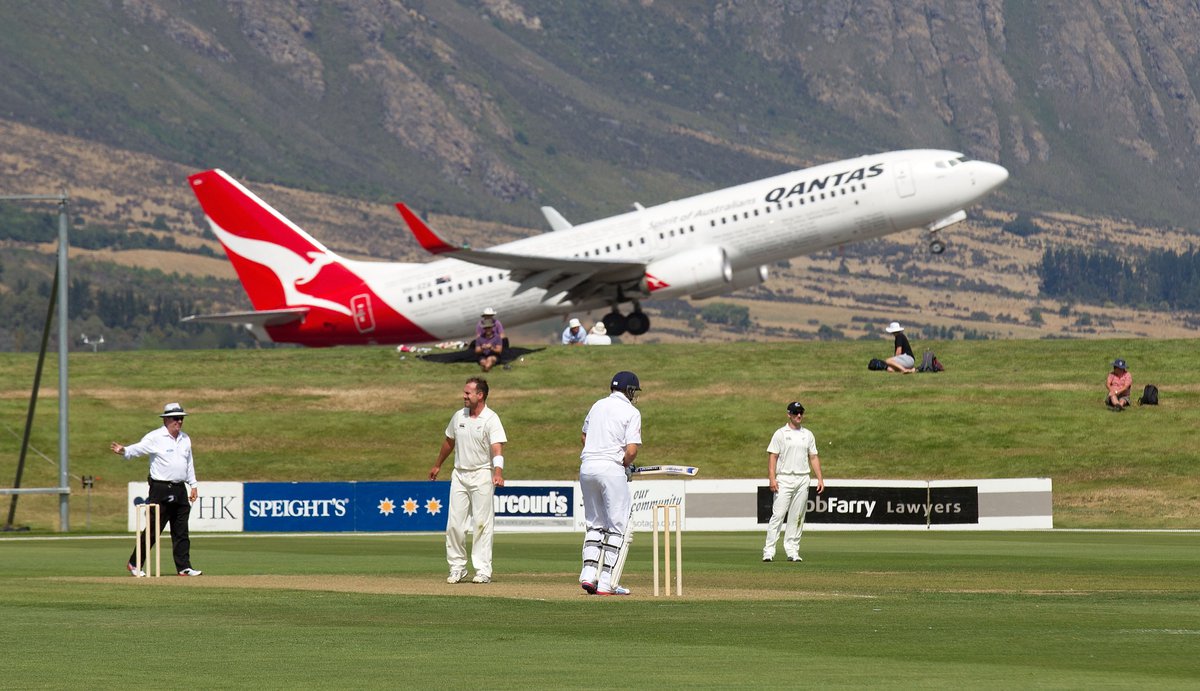 A resort town in the state of Otago, boasting amazing scenery. The airport is located in Frankton, 8km from Queenstown. Served by Air New Zealand, Qantas, Jetstar and Virgin Australia. Smaller carriers such as Mount Cook Airlines also operate.

On the opposite side of the runway is Queenstown Events Centre, located off Frankton-Ladies Mile Highway, close to the junction with Kawarau Road. The cricket club is one of the most picturesque grounds and best pitches in the world, nestled between the Remarkables mountain range and Lake Wakatipu. International teams are regular visitors, for limited over games only. As many UK cricket fans know, rain plays a big part in the match outcome. Those staged here are no exception!

With excellent spotting opportunities should games fail to live up to expectations, even patients at the Lakes District Hospital can watch aircraft or cricket, although binoculars may be needed. The best views from the nearby golf course, the mountain backdrop providing great photos. 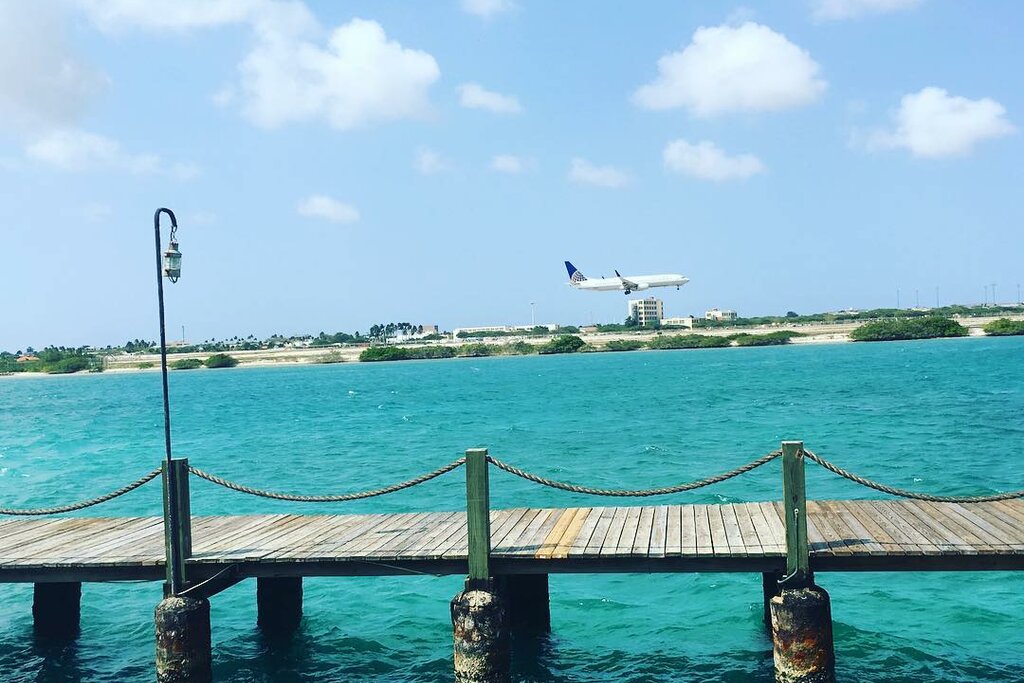 On the main road from Oranjestad to the airport are official and unofficial spotting sites. Structures resembling bus shelters with benches are provided. The road runs parallel with Runway 11/29.

Due to the north-east trade winds, Runway 11 is used more often. Photography is not good due to a high perimeter fence, only “point and shoot” type cameras can be used. Surfside Beach offers more opportunities for large lens use through the metal access gate. Moving towards Havana, a restaurant and bar built on a pier into the bay provides a spectacular viewing location.  Served by the main US airlines, KLM also offers regular flights, as do many South American carriers. The airport is well frequented by general aviation and cargo airlines. 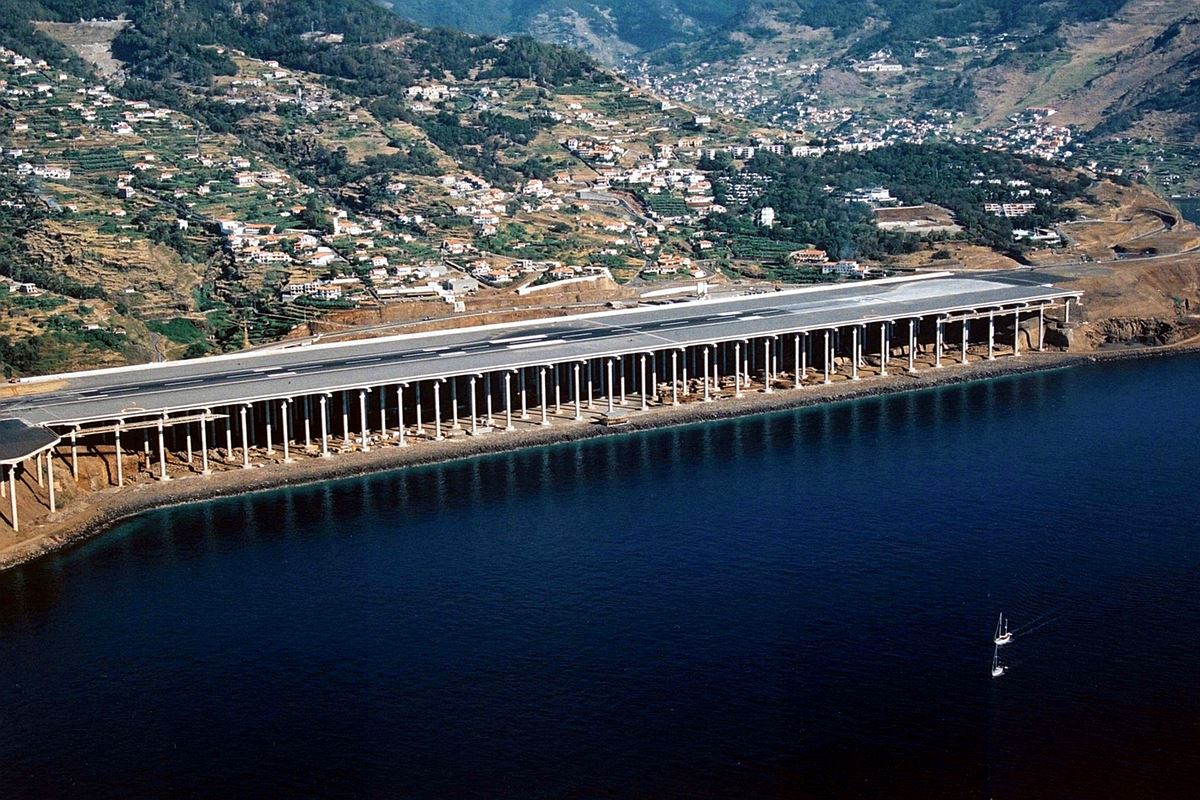 Regularly featuring in documentaries about dangerous airports, Funchal’s runway expansion is a feat of engineering excellence. With a shear drop into the sea, ingenuity was required. Instead of using landfill, 180 columns each 70 metres tall were built to support the runway extension. The airport has been dubbed the Kai Tak of Europe because of the sharp angled right turn needed to line up with the runway. An airline’s more senior pilots are always on the flightdeck, as special training is required. A viewing terrace is located on the terminal’s top floor. Another good location is Rua Santa Catarina, 100 metres from the runway and about 50 metres higher.

Park at the first possible place on the right, then go about 50 metres downhill to a concrete box (contents unknown!). Stand on this box to get close pictures of landing planes. Another possibility is opposite side of the road, where there’s a bar. Climb the hill and see aircraft still in the air. 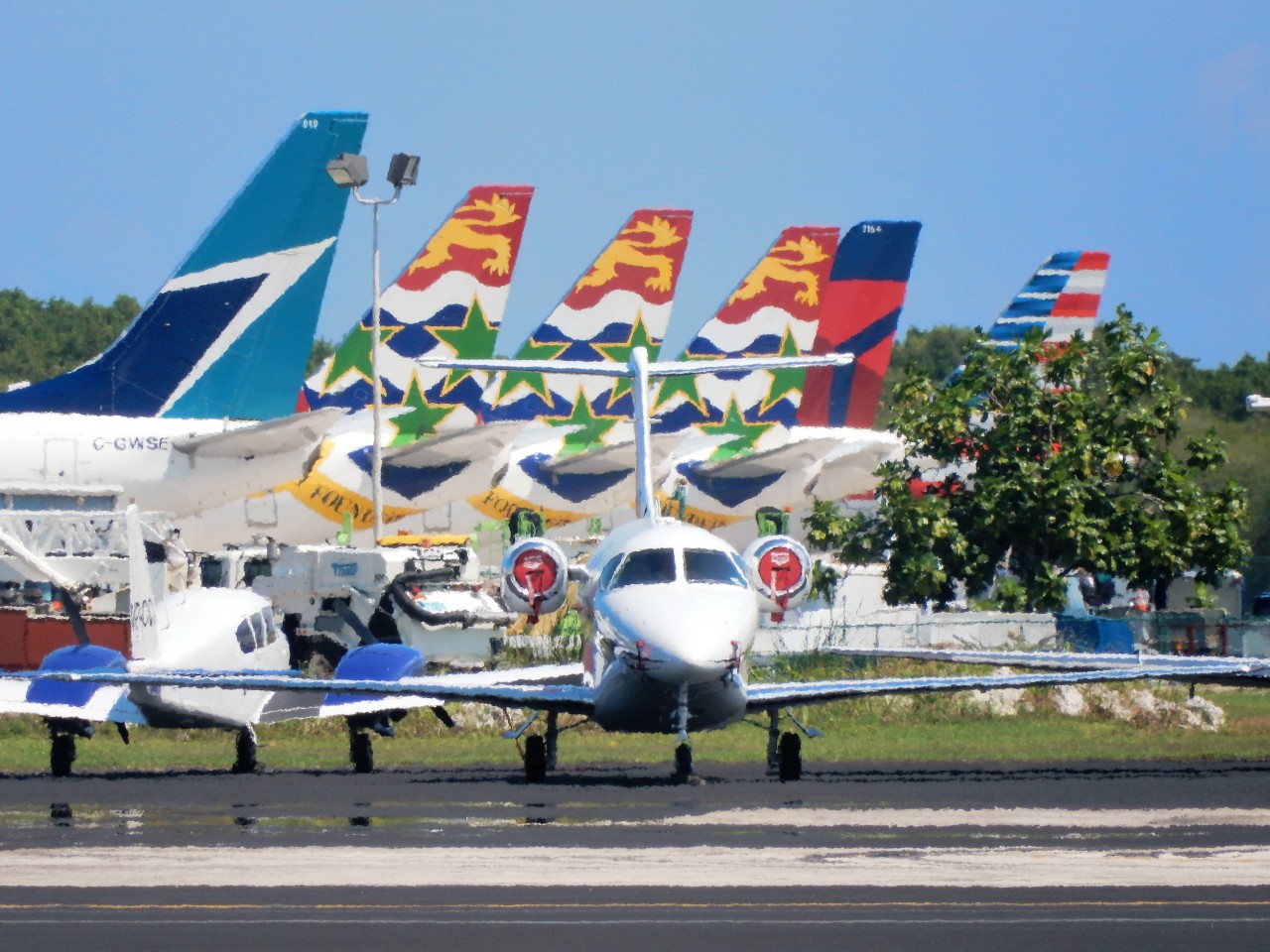 Another airport in an idyllic location, with easy access for spotters.

The runway at Owen Roberts International is short at 7,000 feet. Home to Cayman Airways linking the USA and Caribbean, their fleet consists Boeing 737s and Twin Otters. Island Air offers inter-island services, charters and sightseeing flights. Other airlines include American Airlines, British Airways and Delta. It’s usual for pilots to slam the brakes on as soon as the aircraft touches down; the runway end is the ocean!

Crew Road provides an excellent spotting place. The other is Sunset House, a shore diving centre where you can also get food and a beer. Saturday is busiest for tourist arrivals/departures, between 1100 and 1600 hours from mid-December to March. Although surrounded by a perimeter fence, there are plenty of spotting opportunities. The terminal has a rooftop viewing terrace, where photos can be enhanced by palm fronds. Runway action distance shots almost impossible due to the heat haze. Many business jets, British Antarctic Survey Dash 7 and Twin Otters are also regular visitors. 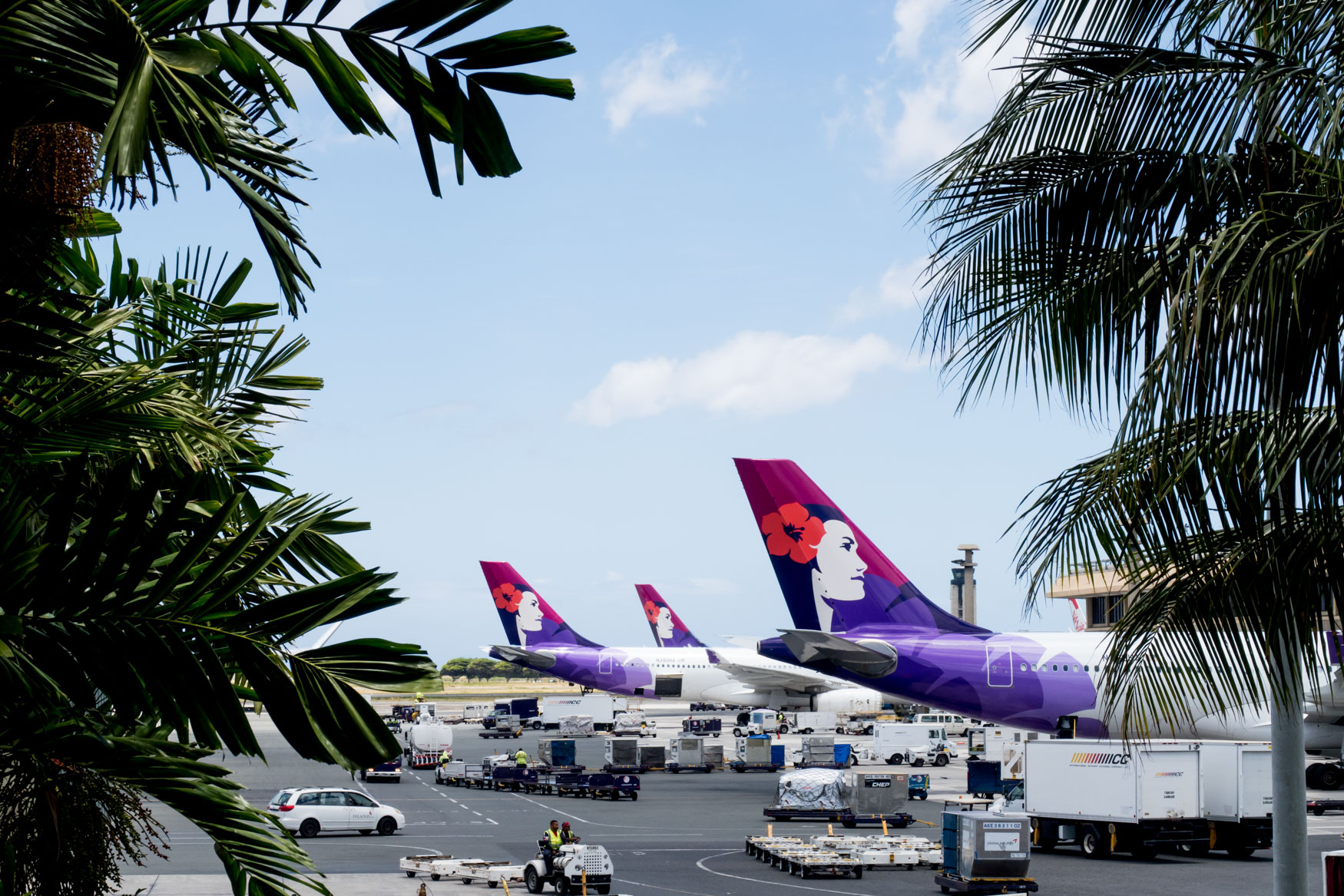 The holiday of a lifetime can also provide great spotting opportunities. Located on Oahu, the airport site is shared with Hickam Airbase, so plenty of commercial and military traffic can be seen. It also boasts the Reef Runway, built entirely on a coral reef island.

Lagoon Drive Parking Lot seems the best spotting site, although ground level photos are obstructed by a fence. If the terror level increases, then police checkpoints are set up and the area becomes inaccessible. The mountains provide an excellent back drop for landings on 4R and 4L. Iroqois Point is a gated community, where day access is available after registration. Good views are possible from the beach, although various lenses are required for quality photos. Aloha Tower’s observation deck in downtown Honolulu also offers airport views, but it’s too far away for serious spotting. There are some opportunities airside where there is often no glass between walkways to gates. 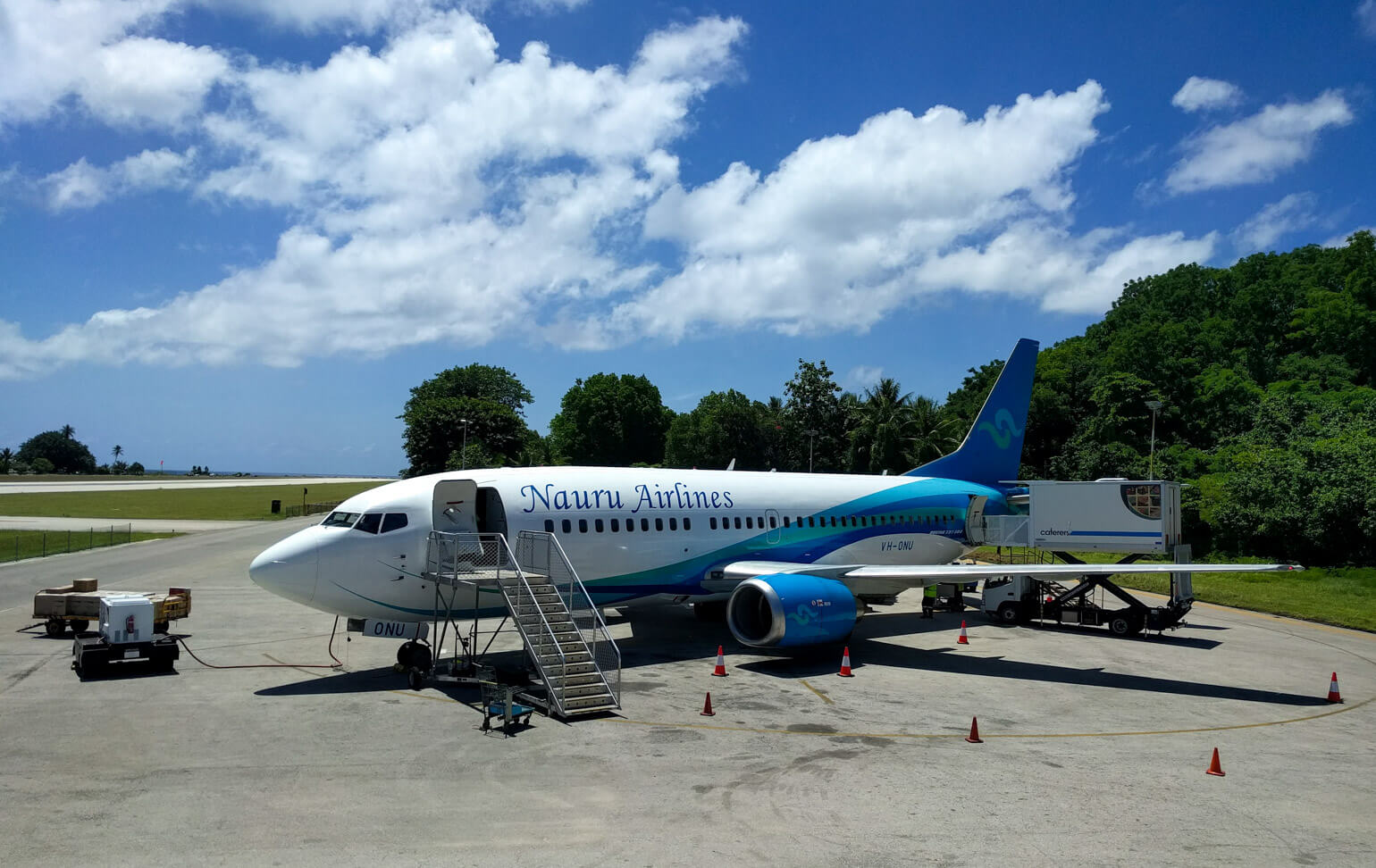 The Republic of Nauru’s only international airport. A tiny atoll in the Pacific Ocean once rich in phosphates, the runway has been extended twice, out beyond the reef. The original airstrip was built during WWII under the island’s Japanese occupation. Nauru Airlines connects it with eight international destinations. The only long-haul service is Brisbane. A far cry from the days of Air Nauru with routes including Sydney, Melbourne, Hong Kong, Manila and Singapore.

The current fleet is four Boeing 737-300 and one dedicated 737-300F. Others serving this airport include Norfolk Air and Virgin Australia. It could be the Pacific’s equivalent of Gibraltar, as a police motorcycle rider is responsible for stopping traffic on the coast road. The job’s inherent dangers include dodging wayward pigs and drunks, especially at night! 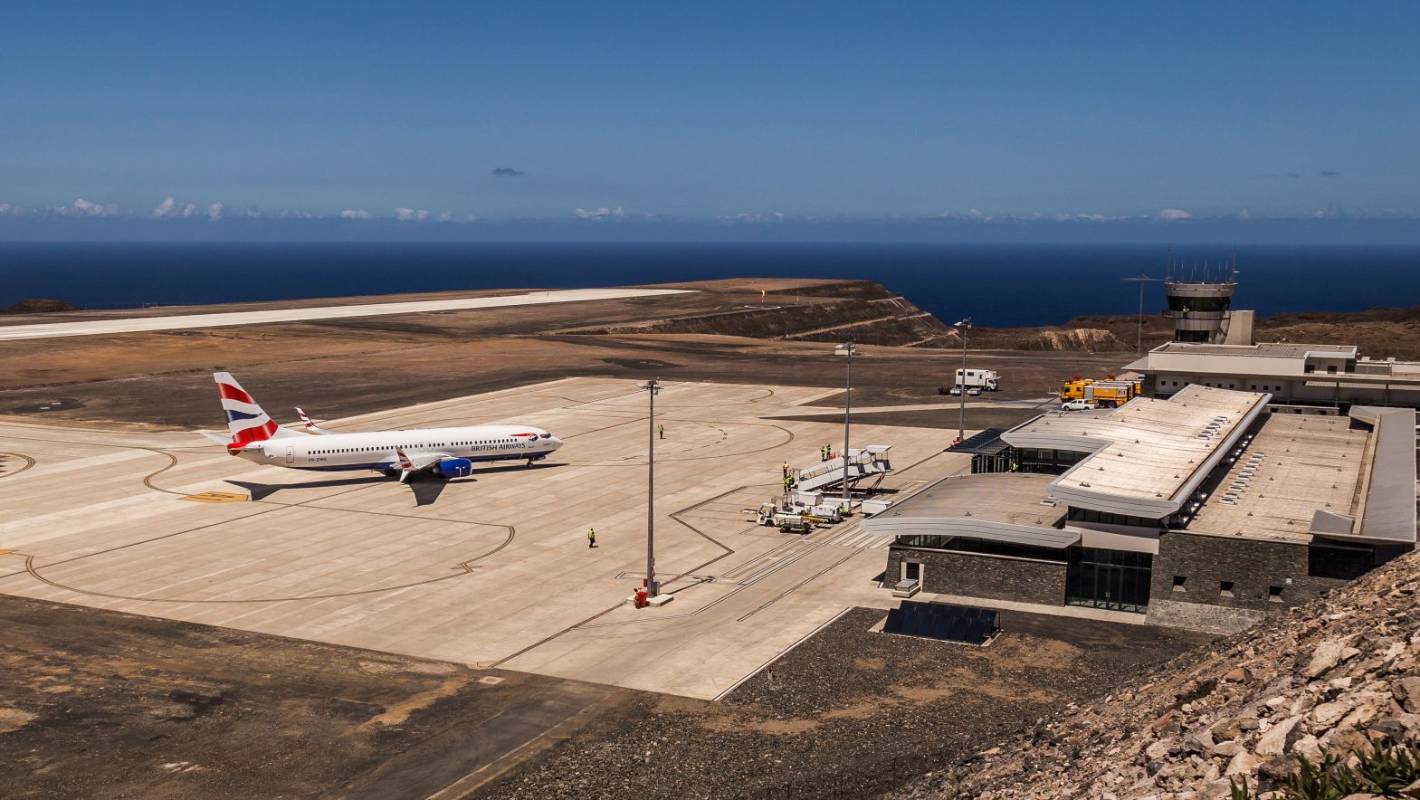 Located in the Atlantic Ocean, over 2,000 miles from the nearest landmass, St Helena was previously accessible by sea only. Services operated from Cape Town once every three weeks. In 1943, the South African Air Force undertook a feasibility study but decided it was impractical. Fast forward to 1999, when the island government explored the idea. The British Government decided to build the airport to enhance access to the South Atlantic and support the island’s wish to become a tourist destination.

Prosperous Bay Plain was the chosen location, despite environmental concerns. The first passenger jet, a Comair Boeing 737-800, landed in 2016. Wind shear problems affecting Runway 20 were discovered which delayed the official opening. Comair also wanted to operate to Johannesburg. This met with a negative reaction from the residents, many of whom had strong links with Cape Town. SA Airlink then stepped in to offer flights from Johannesburg, refuelling in Namibia. On 30 July 2020, a Titan Airways Boeing 757-200 operated a repatriation flight for port workers. The main access road seems to be Mole Spider Hill, which is currently closed due to Covid-19 restrictions. Probably best to put this one on a spotting “bucket list”, until more airlines start flights. 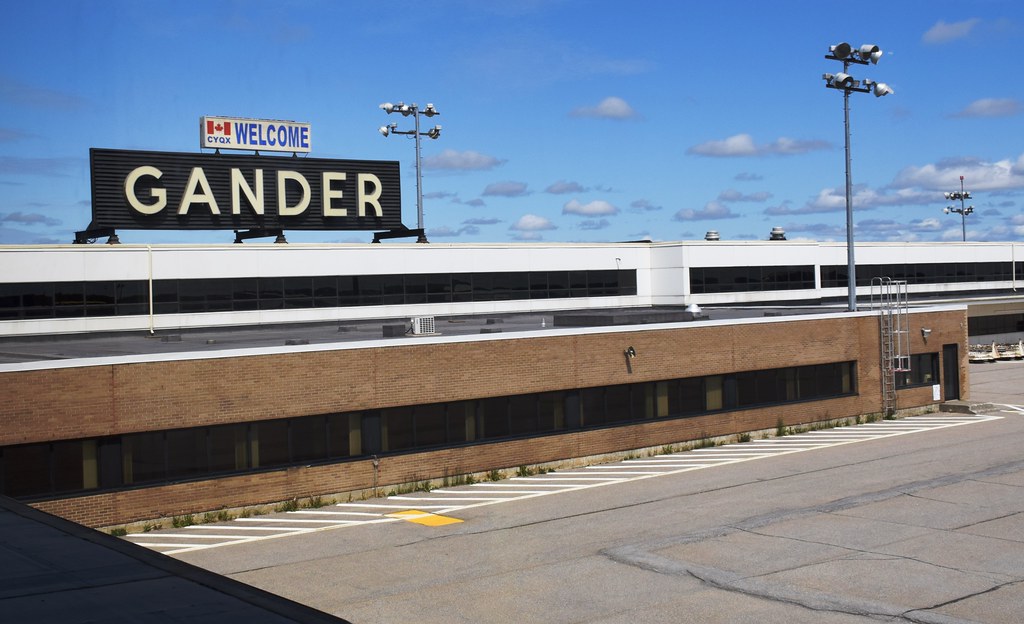 Located in Newfoundland & Labrador, Canada. The runways are shared with the nearby military base. Within a few years of opening in 1938, it was designated the world’s largest airport, boasting four runways. From 1945 it acted as a refuelling stop for transatlantic flights. With this facility no longer required, it became the home of Gander Control, one of two air traffic control centres for high-level traffic.

Gander achieved notoriety on 11 September 2001, when 38 passenger jets were forced to land there. The residents’ hospitality became the subject of a movie and latterly a musical. It’s also designated an emergency landing site for the transatlantic ETOPS system.

Air Canada Express is the only airline offering a year-round service, and other carriers operate seasonally. The runways were resurfaced in 2012 but the Canadian Government appears reluctant to upgrade the terminal facilities. The airport welcomes spotters at the Circular Road location, providing a cut-out section in the perimeter fence where photos can be taken. Many interesting arrivals include Antonov An-225 and C17 due to close location of Canadian Forces Base Gander.