What are contrails and how are they formed? 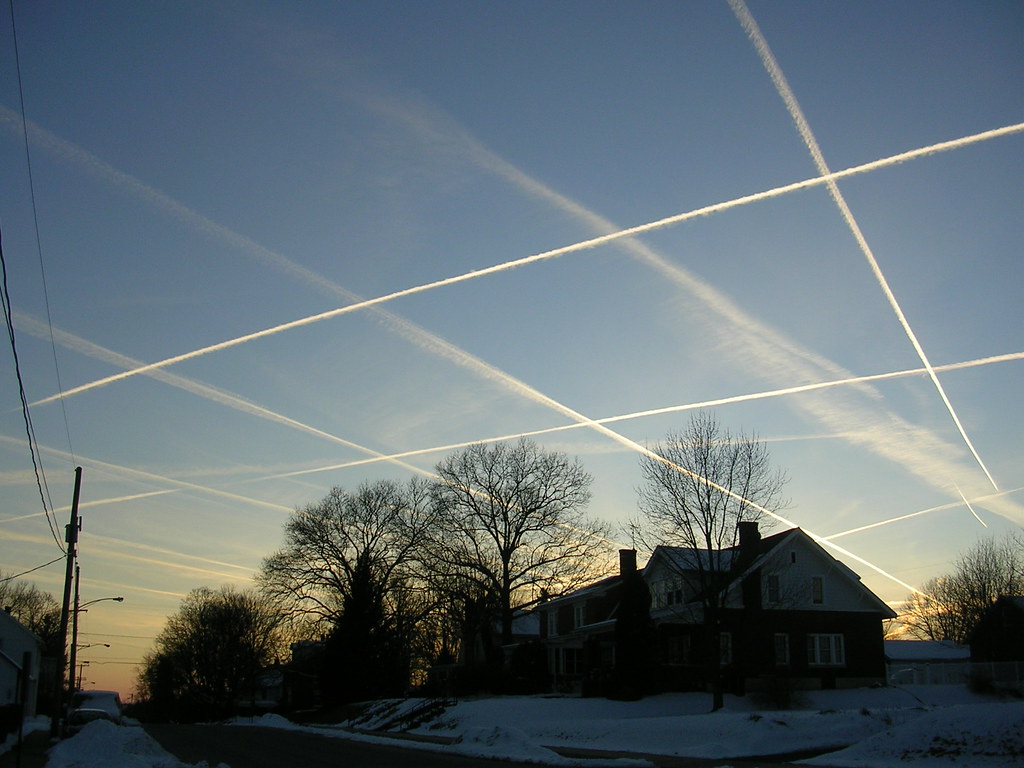 Contrail is short for condensation trail; sometimes called vapour trail. They’re formed by aircraft at their cruising speed and height, either by engine exhaust or air pressure changes. Basically, it’s the coming together of water as ice crystals and the low air temperature. How long they are seen depends on temperature, humidity and wind speed. Some may only last for minutes or remain for hours, spreading to resemble cirrus or altocumulus clouds. These are also referred to as Cirrus Aviaticus. Ideal formation conditions are above 26,000 feet, with an outside temperature of at least -36C. However, they can form closer to ground when air is cold and moist. They have no effect on the weather. Rainbow ones are aerodynamic contrails formed by air pressure reduction as it moves over the wing. When the pressure of a gas falls, then its temperature also falls. This causes small drops of water to condense, which may then freeze. The frozen drops get larger as more water condenses on them. Different sized drops have differing optical properties, which affect different wavelengths of light thus giving the “rainbow” effect.

What’s the difference between engine and wingtip contrails? 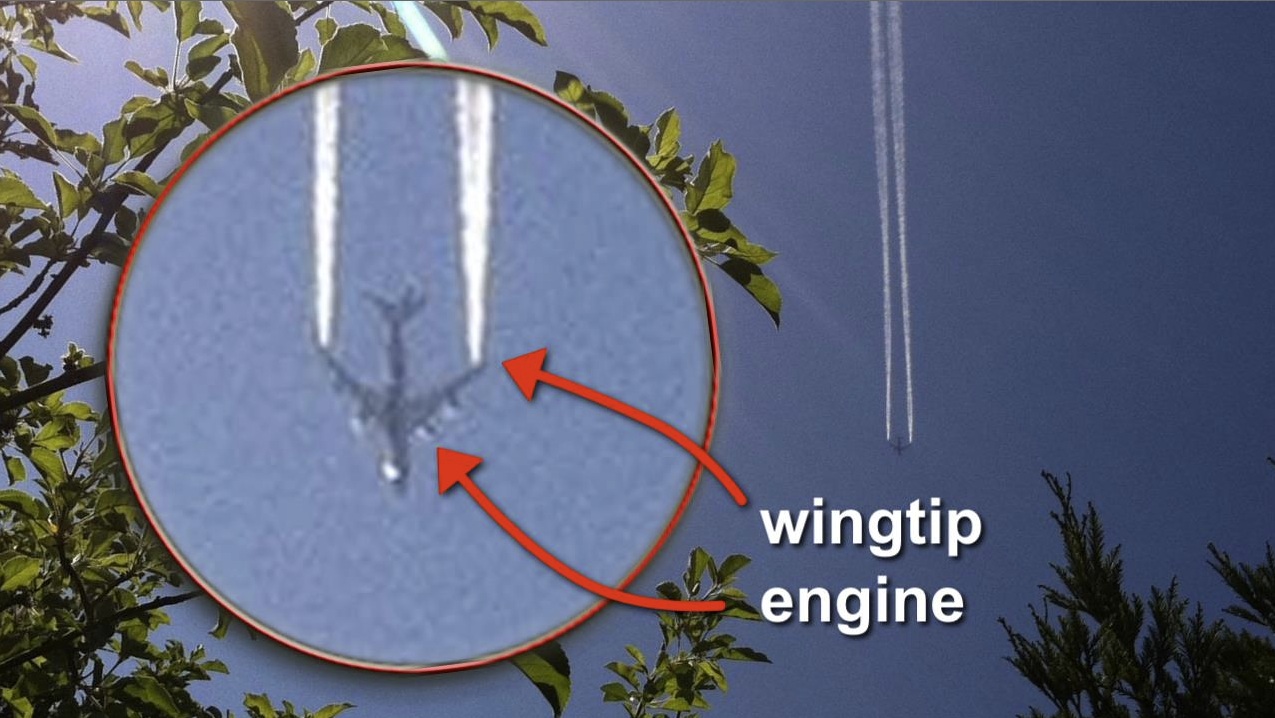 Contrails can also form at the wingtips and flaps. The reduction in pressure and temperature across each vortex can cause water to condense and make the cores of wingtip vortices visible. It’s more common on humid days.

A new category – the hybrid contrail

Although not officially recognised, there’s another type. Two distinct thin cylindrical portions of an exhaust contrail that have larger ice crystals due to wake vortices. A hybrid contrail is formed in a narrow range of atmospheric conditions, specifically with the temperature below -40F, and relative humidity with respect to ice slightly below 100%. Low pressure in the wake vortex core allows for longer time when the mixing air is above 100%, hence the ice crystals in that portion of the contrail will grow larger and/or more numerous. The resultant region of greater contrail densities will initially be indistinguishable from the exhaust contrail. As the exhaust contrail turns from ice back to water vapour, then the hybrid contrail will show as two thin rope-like regions running along the contrail. Usually, the hybrid will persist for a few minutes longer than the exhaust contrail. Since it’s much smaller in cross-section than the exhaust contrail, the effects of turbulence cause the hybrid to twist into loops and curls often resembling chromosomes.

How far away are the contrails? 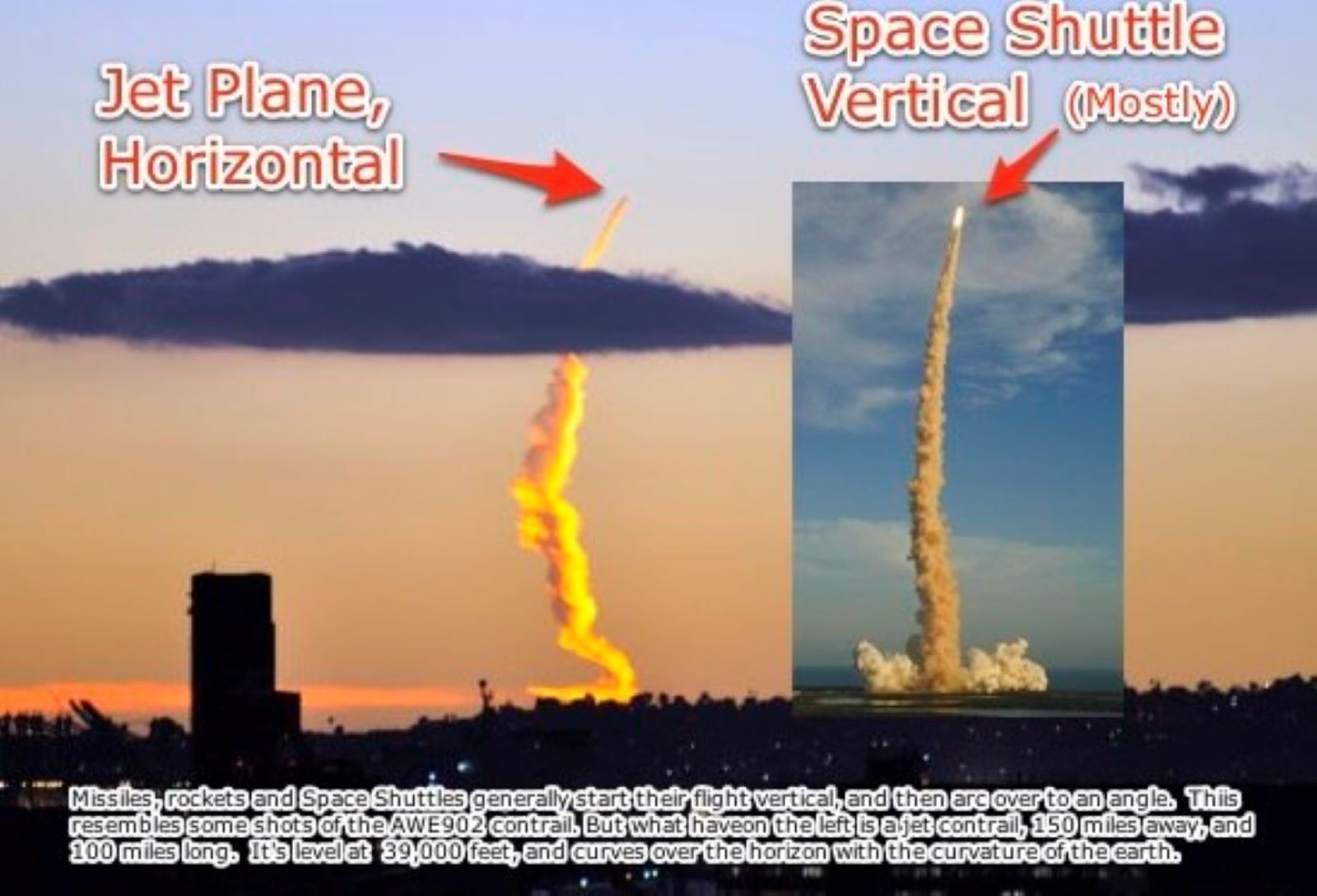 As they usually form above 26,000 feet, height is easier to judge than distance. If the type of aircraft isn’t known, then it can be safe to assume it’s around six miles up. Before the advent of tracking services such as FlightRadar24, mathematical calculations were needed to work out distance. Putting it simply, if you go outside and point upwards at 45 degrees, the aircraft at the end of your finger will be 6 miles away. At lower angles (below 5 degrees), the curvature of the earth can be deceptive so the distance will be greater. An important consideration is human perception, especially when mistaking aircraft for missiles or a spacecraft launch. For example, an aircraft forms a contrail 100 miles long, level at 39,000 feet, it curves with the shape of the earth. In other words, we’re only processing what we see and not considering distance, height or earth curvature.

Organisations such as NASA have carried out extensive research into their effect on ozone, ice crystal formation and particle composition. It’s acknowledged that aircraft emissions do contribute to global warming. Other studies have found that artificial cloudiness caused by contrails has more effect during the night. The aftermath of 9/11 proved an ideal opportunity for various scientists to measure the effect of aviation on the climate, although the fine weather conditions had a significant impact on this research. Other studies have concluded that a small drop in height would reduce the number of contrails. Also, fuels with a reduced sulphur content would reduce the carbon emissions as such exhaust impurities can provide the basis for water crystals to grow.

Why are they often called chemtrails?

The short answer is conspiracy theories.

It’s an erroneous belief the trails contained other chemical or biological agents because they took longer to disperse. Another suggestion that such chemicals were used for human population control, weather modification or warfare. Scientists frequently deny that such materials are contained within the contrails from high level aircraft.

In the late 1990s, USAF was accused of spraying the population with mysterious chemicals. It’s quite common for new commercial aircraft to be loaded with ballast water barrels, to simulate passengers and cargo. Pictures on the internet led to theories that they contained chemicals released into the atmosphere.

Theorists believe they have provided proof of aluminium and barium spraying. In fact, the levels recorded in the atmosphere have been within normal parameters. The results often came from incorrect testing methods or measurements, such as testing soil instead of air. The simple explanation is conspiracy theories result from lack of understanding or scientific knowledge. Just because the clouds look different doesn’t mean they’re full of nasties being deliberately dropped on us! 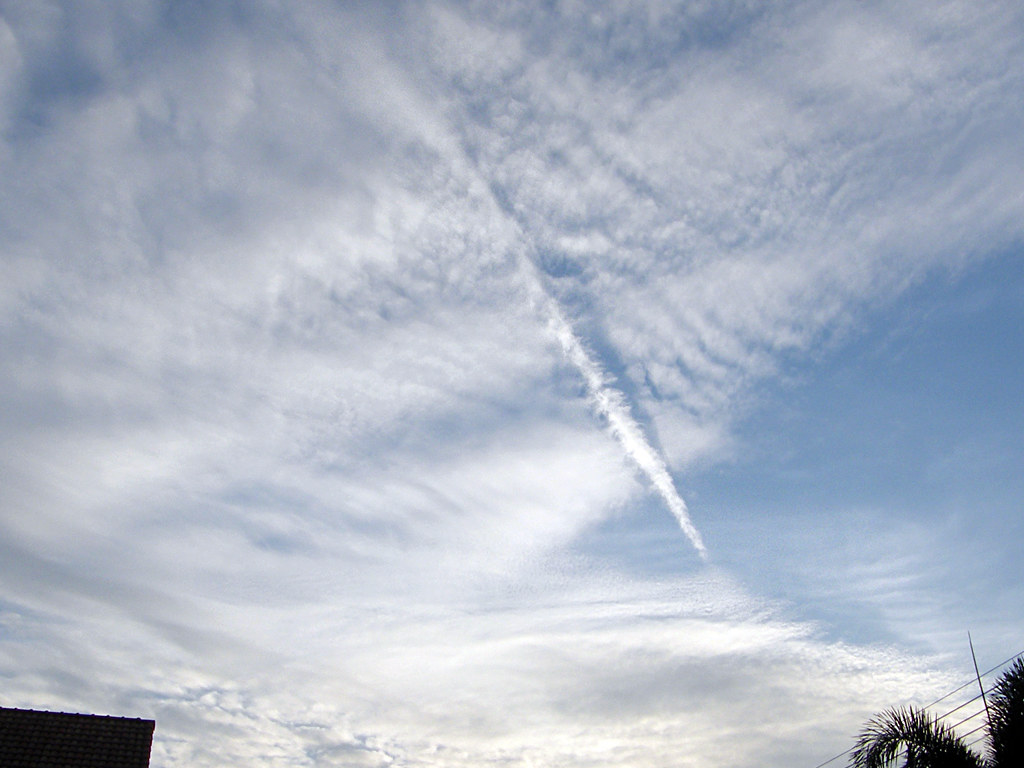 As an aircraft passes through cloud it dissipates the cloud in its path, this is known as a distrail.

The warm engine exhaust and advanced vertical mixing in the aircraft’s wake can cause cloud droplets to evaporate. If the cloud is thin, this process forms a cloud-free corridor. 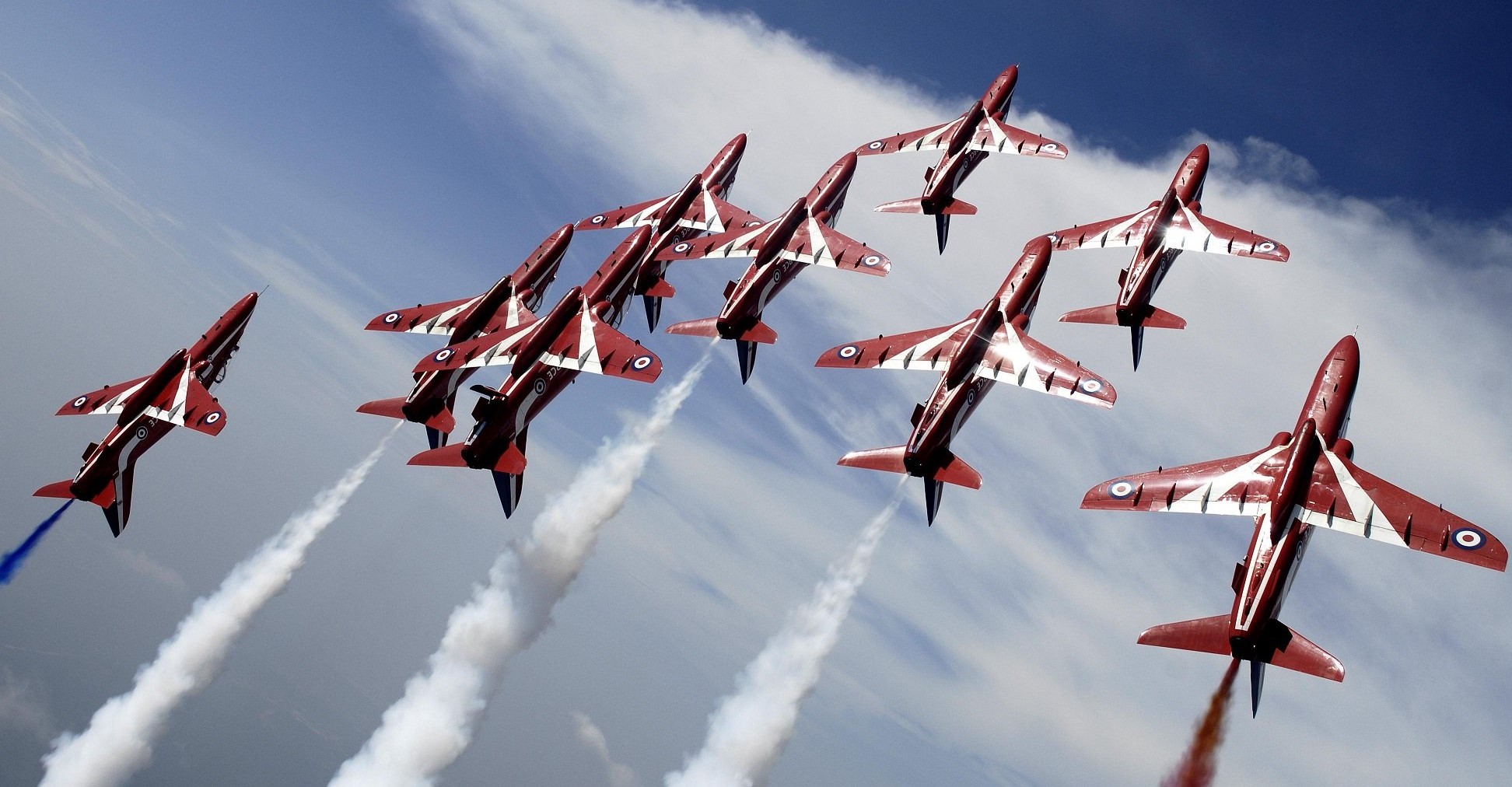 The short answer is No.

The aircraft are fitted with tanks containing dye. At designated times in the display, each pilot flicks a switch on the instrument panel to activate the colour. If you listen in to transmissions, the command is “Smoke On”.

Basically, a generator injects a small amount of fuel into the jet exhaust, which produces white smoke. For colours, dye is added to the fuel.

What will the future hold?

With the current dramatic reduction in commercial aviation, there’s a distinct lack of contrails.

Many countries have reported improved air quality, which is also attributed to the lack of cars during lockdown/quarantine. The Covid-19 pandemic may result in further research projects for environmental issues such as aviation emissions, although the industry only accounts for 2-3% of the total.

The use of biofuel could have a significant impact on aircraft emissions, although currently it must be mixed with Jet A1.