Ralph Olson provides this report on the Palm Springs Air Museum, which as it happens is also a fantastic plane spotting location. Story and pictures are his.

This museum makes aviation history come alive like no other facility in the world. Historic aircraft from World War II to Korea and Vietnam are available for viewing, and you can actually touch them. But Palm Springs Air Museum works hard to maintain its aircraft as airworthy. Hearing the sounds of the engines and observing these aircraft in flight reinforces the connection between these machines and the people who operated them in the world’s greatest conflicts. It’s much more than a museum; it’s an airshow! 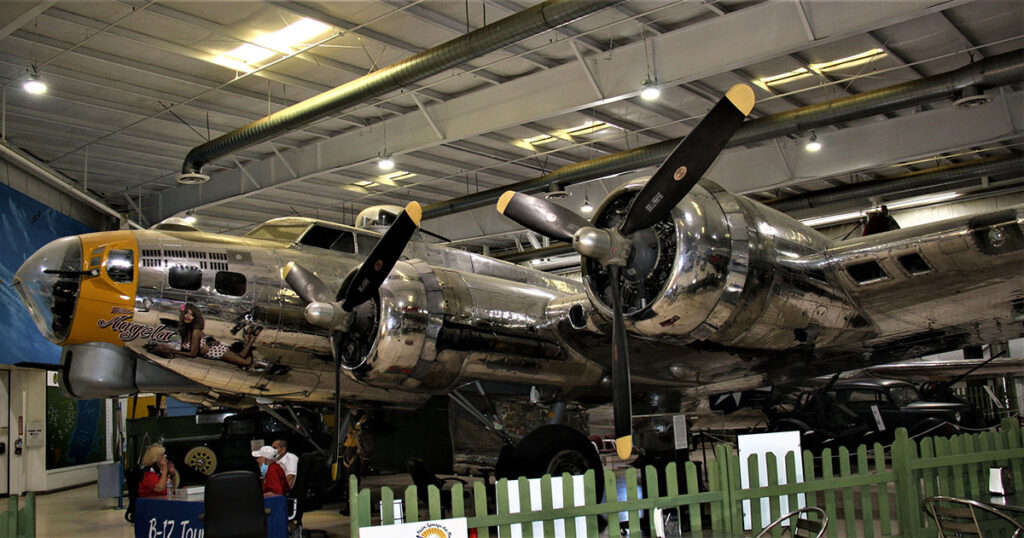 Boeing B17 Flying Fortress “Miss Angela” has its own hangar and visitors are able to tour its entire interior.

The museum was the brainchild of three men, Charlie Mayer–Pete Madison, and Dr. Mort Gubin,–who launched the concept in early 1993 with the help of many early volunteers. This trio enlisted the talents of Bob Pond, a former Naval Aviator who had a reputation as someone who got things done. Pond had a collection of former military aircraft in Minnesota and was willing to relocate them to Palm Springs to make the project move forward. But Pond’s planes did something that similar ones could not: they could still fly, and many were in better-than-new condition.

Resistance came from several Palm Springs Airport Commissioners and the Federal Aviation Administration (FAA), who claimed the museum would be an “incompatible use.” But Airport Commissioners from several Coachella Valley cities didn’t see it that way. Neither did Congressman and former Palm Springs Mayor, Sony Bono who opened doors at the FAA to express his support for the facility.

The case for the air museum was a strong one. These aircraft flew and were part of the reason America and its Allies won World War II. All commissioners stood tall when the final vote came in; the museum was approved without a single vote of opposition.

Ground was broken in February 1996 and the museum opened to the public nine months later with two hangars to commemorate WWII: the European Theatre (Army) and the Pacific Theatre (Navy). The museum was manned, in many cases, by volunteers who had flown or maintained the aircraft on display. The “touch and feel” approach the museum has implemented gives visitors an opportunity to really experience the airplanes so crucial in U.S. warfare throughout WWII.
A third hangar was added in 1999 to house the B-17 Flying Fortress, “Miss Angela”. This aircraft was also acquired from the Bob Pond collection and is maintained by the museum as fully flyable. The B-17 served in all theatres of WWII but made its biggest impact in the European skies as a daylight precision bomber. After Germany surrendered, “Miss Angela” served in the Caribbean Command, and later, as a fire fighting aircraft in California. 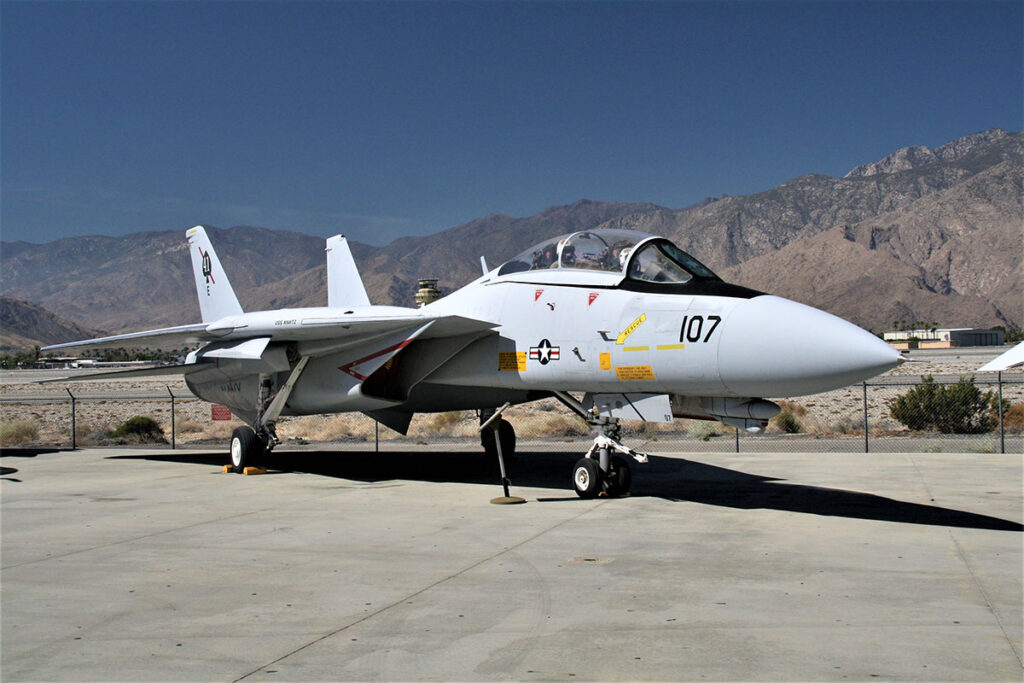 If you feel the “need for speed”, check out the F14 Tomcat made famous by the 1986 movie, “Top Gun” starring Tom Cruise as hot-shot pilot “Maverick”

The museum continued to expand its collection and opened its fourth hangar in 2017 dedicated to the Korean, Vietnam and Cold Wars. At the entrance is the Presidential Experience area with information on US presidents who flew and information about their aircraft. For example, George H.W. Bush was rescued after having to ditch his TBM Avenger in the ocean when he was hit by enemy fire. Other exhibits include war timelines, donation bricks, and a Vietnam POW bracelet display.
Named one of the best aviation museums in the world by CNN, this 86,000 sq. ft. climate controlled facility always has something new. Here, you can also watch technicians perform maintenance on airplanes in real time plus, find engine displays, remembrance walls, interactive flight simulators, former pilot uniforms, a mural honoring the Tuskegee Airmen, aviation art, and thousands of aircraft scale models. The museum’s most recent acquisition is the F-117 Nighthawk stealth fighter which is now undergoing a complete restoration prior to being displayed in its own hangar in the fall of 2021.
But the ultimate experience is also waiting for you. Climb aboard a P-51 Mustang WWII fighter and sit behind the pilot as he cranks up the 1,750 horsepower engine and launches you into the desert skies. Cruise over Highway 111 at 250 MPH without even touching the gas pedal. Or take a ride in the Douglas C47 Skytrain and imagine yourself among the thousands of paratroopers who flew into the D-Day invasion. 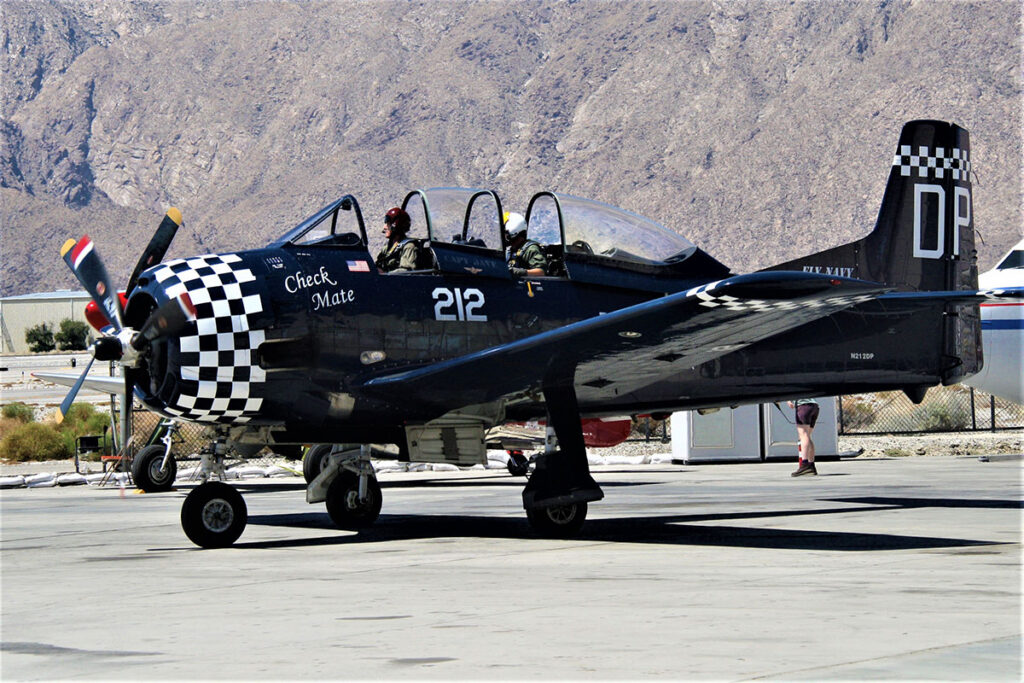 For more daring visitors, adjust your seat belt a little tighter as you feel the wind in your face in the open cockpit Boeing Stearman biplane. Perform aerobatics in the North American T28 Trojan, which is one of the loudest aircraft to operate at the Palm Springs Airport. Or watch this magnificent show from the bleachers as the museum puts these war birds into action.

If you are looking for a first-class attraction whose quality matches that of the National Air and Space Museum in Washington DC, make this museum a must-see. History is presented in a manner that honors the women and men who flew and maintained these awesome machines.

A Great Place for Plane Spotting! 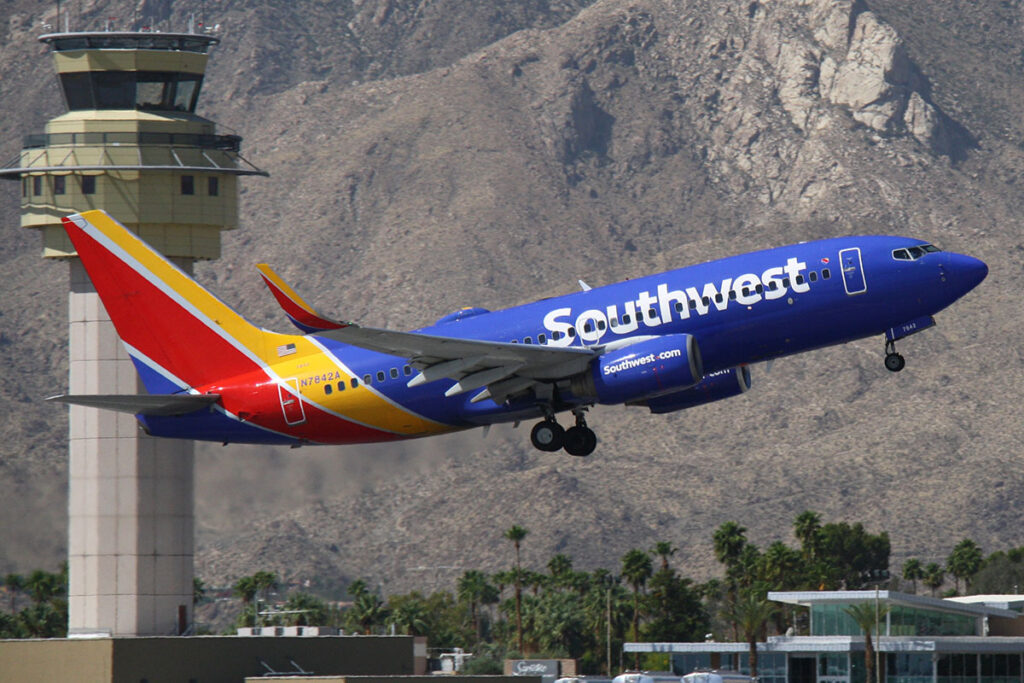 PSP is located just east of Mount San Jacinto, the second highest peak in Southern California at 10,834 feet (3,302 m). Southwest Airlines B737-700 N7842A climbs out steeply with the mountain as the backdrop. 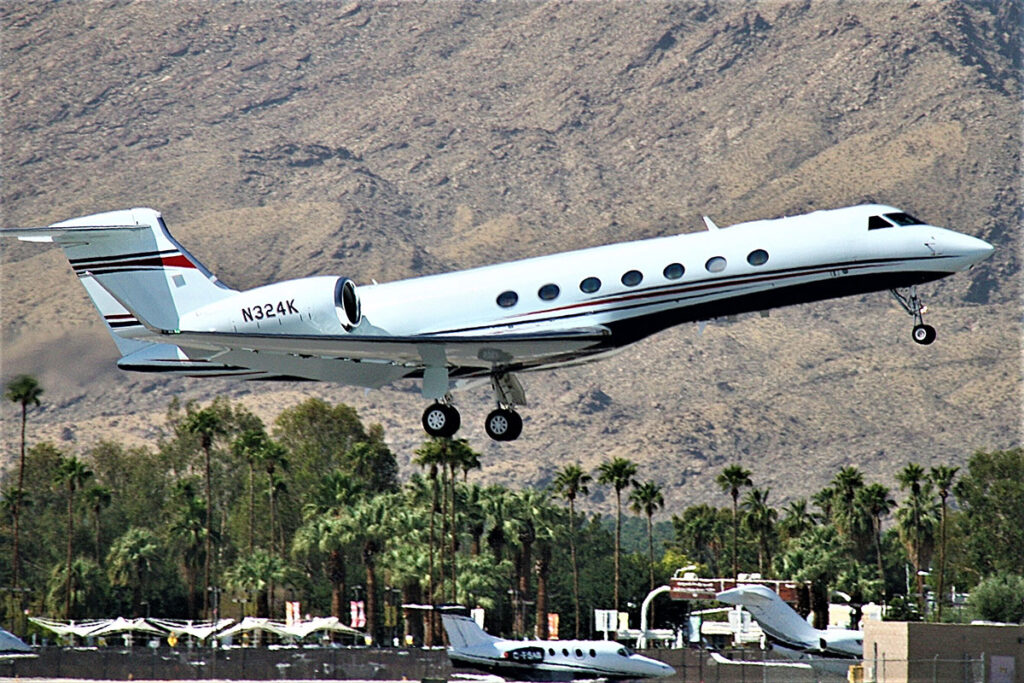 PSP also has a great deal of business aircraft departing and landing on a daily basis. 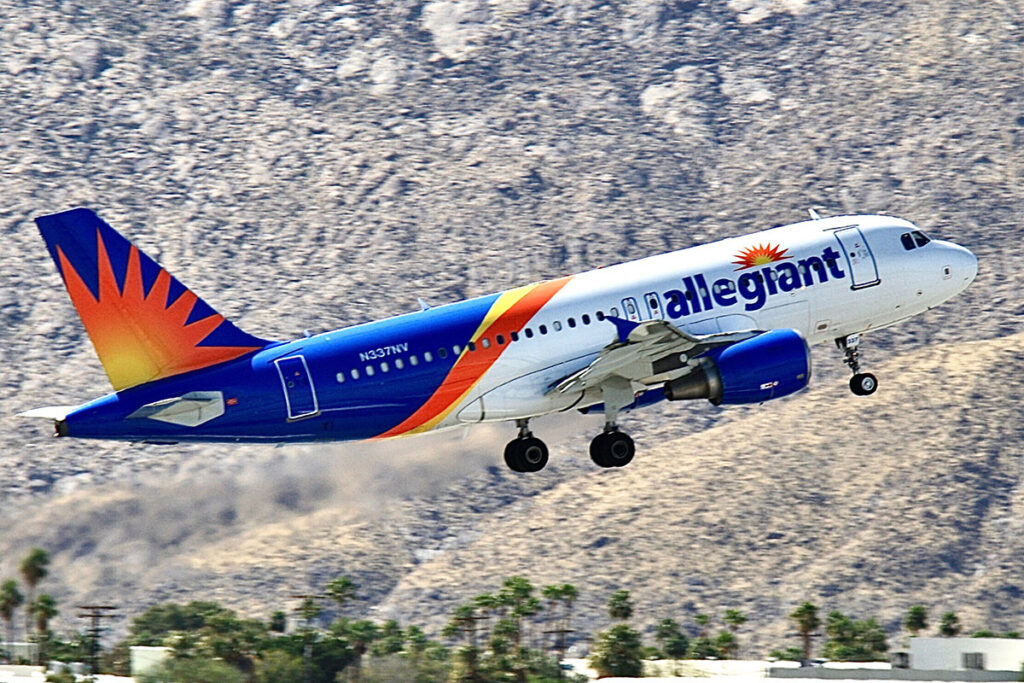 For aircraft spotters the museum provides a perfect setting for observation and photography of both military and civil aircraft. Once you have had your fill of the military, the civil activity is a short walk away. Near the south side of the museum there is a line of military aircraft on static display. The ground is slightly elevated here and allows for great photography over the barbed wire fence. Enjoy the action of the Palm Springs International Airport (PSP) and be sure to use the wings of the aircraft on display to escape the desert sun. 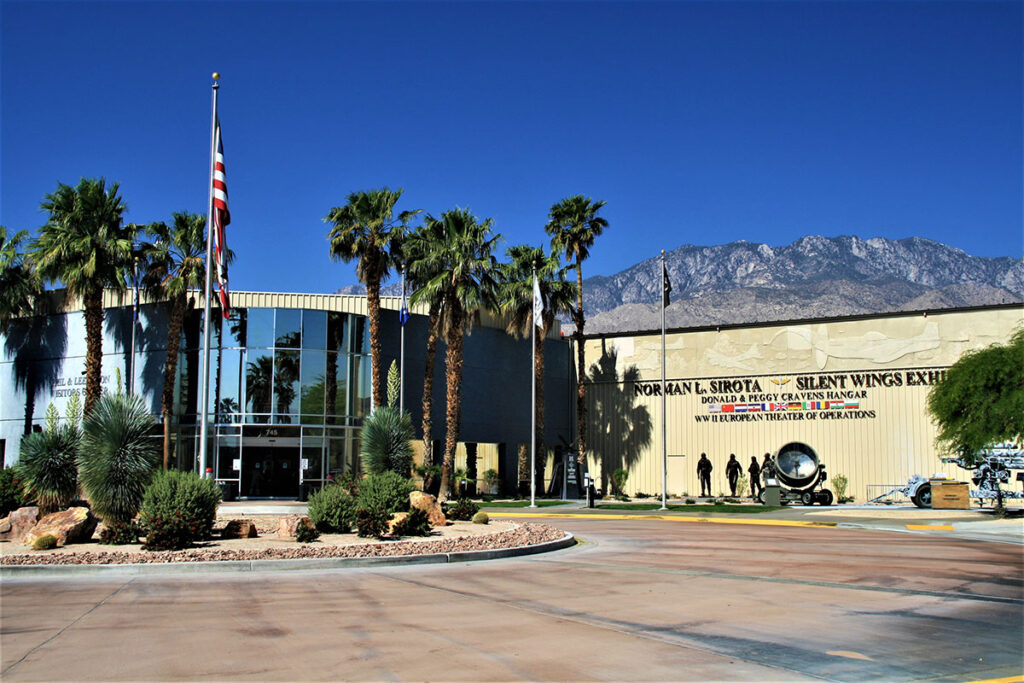 The Palm Springs Air Museum was established in 1996 and is currently celebrating its 25th Anniversary.