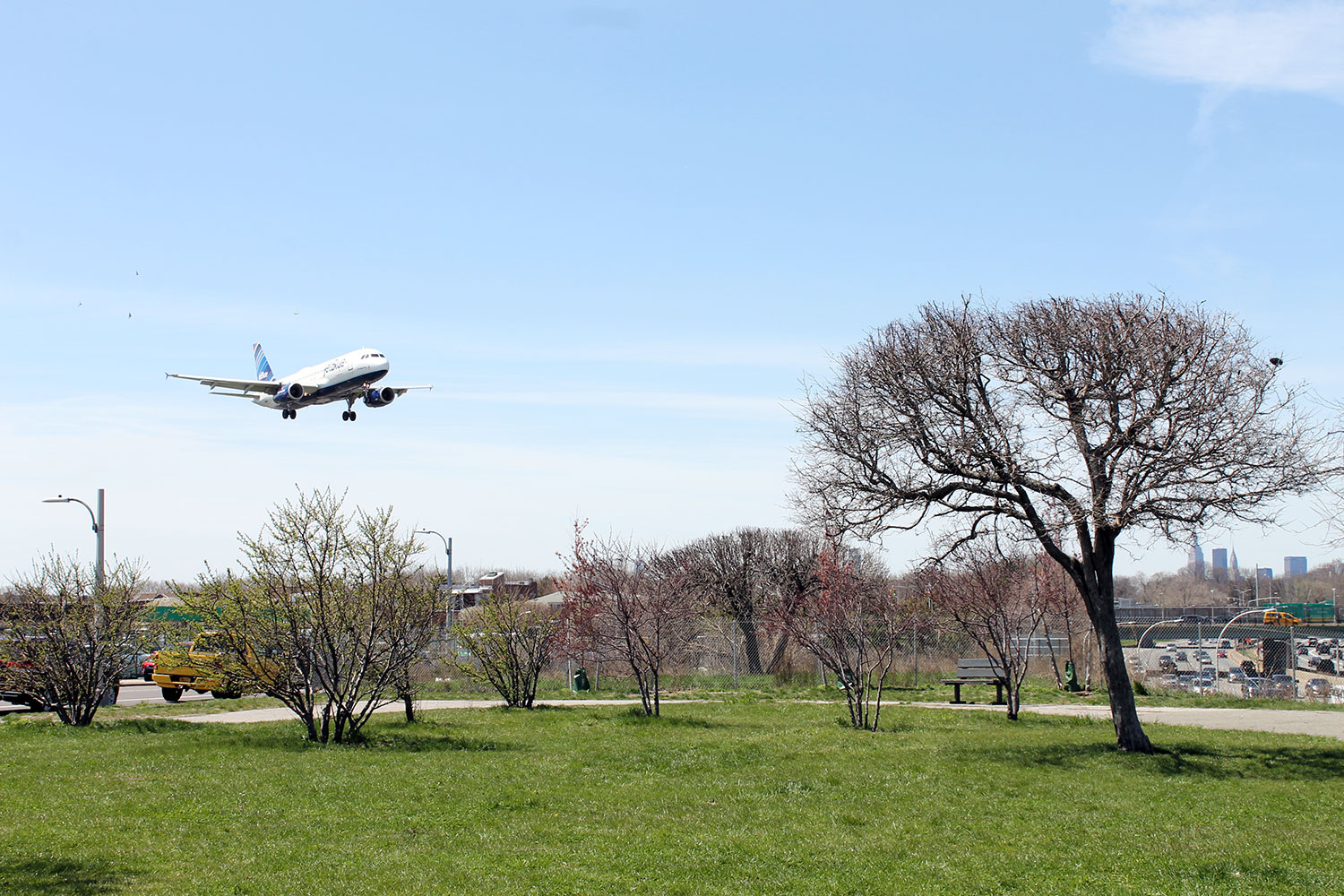 Spotting in the New York area can be quite difficult for a number of reasons.

First, the lack of official facilities means spotters have to seek out places with a view of aircraft movements. This can then, understandably lead to the second problem – twitchy security, police and locals who consider people pointing cameras and binoculars at planes to be a bit suspicious.

Understandable given the very recent history in a city like New York.

So, on a recent trip I decided to try out one location that does seem to be acceptable for watching planes. In fact, it’s called the Planeview Park, and it’s a useful place for spotting at New York LaGuardia airport. The Planeview Park at LaGuardia airport is located off 23rd Avenue close to the end of runway 04.

It overlooks the Grand Central Parkway as it approaches the airport terminals.

Here’s a map of the location:

The Planeview Park is a small public park next to the street and a technical college in a semi-residential area close to LaGuardia. It has a path leading through, is fronted by trees, has plenty of grass and handy park benches to sit on.

Most importantly for spotters, it has an elevated position overlooking the western side of the airport, and the approach to runway 4. The fences can get in the way when photographing aircraft on the ground. If aircraft are landing on runway 4, they pass very low over the edge of the park. They’re so close that you don’t really need a zoom lens for taking pictures.

Aircraft taxying to depart runway 4 are also clearly visible, but the fence gets in the way of useful photography.

The Marine Air Terminal is visible to the left, and any aircraft parked remotely on this side of the airport.

If departures are on runway 22 they will also pass the park, but will usually be too high to photograph.

Movements on runway 13/31 are not really visible from the park, and the other terminals are also out of sight. Aircraft in the technical college compound near LaGuardia

Adjacent to the Planeview Park is the Vaughn College of Aeronautics. If you walk along Ditmars Blvd from the park, you’ll soon reach the outdoor area where the college’s collection of training airframes is located. You can easily read them off through the fence.

The collection comprises about 12 aircraft, mostly light aircraft in various states. There are some larger twin props, and a few classic light aircraft. Nearly all have their registrations visible.

Continuing along this road, you can walk to the airport terminals for refreshments. It takes about 15-20 minutes to walk.

If you do not have a car, getting to the Planeview Park at LaGuardia is relatively simple from Manhattan.

Take the N or W Subway lines to Astoria Blvd.

At Astoria, go down the steps to the road level and find the bus shelter outside where the M60 bus stops. You need to buy a ticket from the machine first. This bus heads to LaGuardia, and passes the Planeview Park. Press the stop button to get off there.

What You’ll See at LaGuardia Most movements seen from LaGuardia Planeview Park are regional jets. New York LaGuardia is primarily a domestic airport, with some international services to Canada.

It is a hub airport for American Airlines, Delta Air Lines and JetBlue Airways. These airlines and their feeder partners make up the bulk of the movements, but you’ll also see plenty of Southwest Airlines, Spirit Airlines and United Airlines.

Movements are constant, with very few quiet periods. However, I noticed that the majority are regional jets like the Embraer 145, 170, 190, and the Bombardier CRJ. The largest regular aircraft seems to be the Airbus A321, but the 757 and 767 occasionally make an appearance.

This is a great spotting location when visiting New York. It is perfectly acceptable to sit here watching movements, taking photos and logging aircraft. On my visit there were other spotters present, as well as those simply enjoying the park.

I chose to keep my camera inside my bag when I wasn’t using it so as not to attract too much attention. I also tried to keep away from the edge of the park where you are clearly in view of the busy Grand Central Parkway and could arouse suspicion.

I discovered Planeview Park last year when in NYC on a business trip – it is well worth a visit. Being December it was freezing, it’s quite an elevated and exposed spot – dress for the Arctic!,
I got an Uber there, the problem with the buses is they operate a one way loop which only stops at the Park in one direction.

Also definitely worth visiting at LaGuardia is the old Marine Terminal (Terminal A) – built in 1939 it’s an art-deco design opened for Pan American’s fleet of Boeing 314 Flying Boats. Link to some photos in my website link below.

I visit planeview park regularly and it’s a great place to spot from. There’s no reason to stay away from the fence, I’ve encountered police at the park and they didn’t care one bit that I was there. Arrivals on 04 are perfect for spotting but the only issue is that that Runway isn’t used all too often for arrivals.

Thanks for the tips James!

Spent two days photographing 04 landers here; was approached by a policeman who started a conversation as he wasn’t aware of the location and was even more surprised when he realised I was from the UK and knew about it! There are one or two mobile food/drink vans parked nearby. 18-135mm zoom is perfect but lighting gets iffy early afternoon so caught the bus to Flushing Bay Promenade and 13 departures were great right into the evening. Had no hassle there either.

Thanks for the info Martin!

This s a place I’d like to spot. I’m planning a road trip to NYC for late November-early December 2020. My main objective is to ride the Holiday Nostalgia train and vintage busess on the M42 42 Street Crosstown.
So I’ll be doing bus, subway, train and light rail photos as well as doing a little bit of plane spotting. I have my itinerary done, doing little tweaks here and there.
MTA buses Q33 and Q48 pass in front of the park and the Q33 goes to 74 St – Broadway subway station on the IRT Flushing Line (7) and Jackson Heights – Roosevelt Av station on the (E) (F) (M) and (R) lines. Q48 goes near 111 St Station on the (7) and Mets Willets Point LIRR station. (I did my research, lol!!)
Hopefully I’ll get arrivals on 04 while I’m there. thanks for the guide!

I always wanted to go here and see the planes. I went there today, Sunday 12/19/20, from 2-3 and didn’t see one plane. I asked someone who works across the street and he said they usually come back to back. Am I missing something? Do they usually come between certain times or was it maybe just a fluke and there was something wrong with that runnway. Idk I’ll try again another time.

Hi Jacob, it could be that the runway was being repaired, or simply because the wind direction favoured the other runway. If you have an app like Flightradar24 you can check ahead to see which runway aircraft are landing on.
Matt