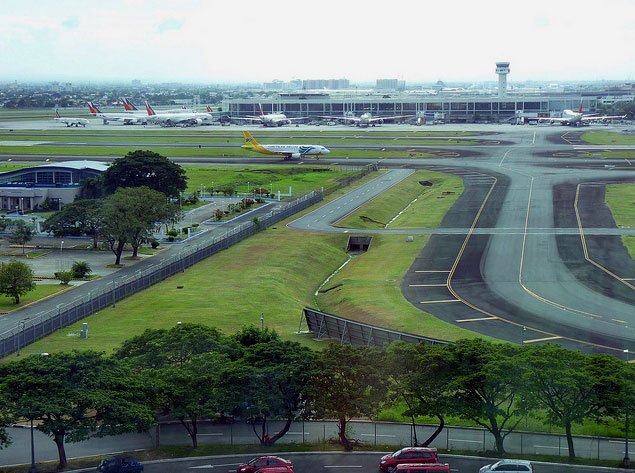 Here’s a guest post from a recent trip to Manila in the Philippines, during which an opportunity was taken to enjoy some time spotting.

A business trip to Manila at the end of November provided some opportunities for spotting. I pre-booked the Marriott hotel near Terminal 3 (domestic terminal) but this hotel is quite expensive (near 200 Euro a night).

Just before I left for Manila I received some good information about the Remington Hotel. The views from here would be much better. Also important was that the hotel is much cheaper! I paid 63 Euro for a room. So, I cancelled the Marriott and booked the Remington.
The hotel opened last year on 11-11-2011 at 11:00 hrs and is much closer to the action, next to the Philippine Air Force Museum and has a free shuttle to the terminals that runs regularly.

The info I had was to get a room on the 5th floor or higher with an airport view. Well, upon arrival they gave me the 10th floor with room number 10009. This room is the middle and any room number between 10073-10068, or 10009-10017, face the airport and have good views. This goes for any floors from 5 up with same numbers. Beware, the room numbers are not logically numbered. From the hall near room 10073 you can have a good look at the PhilAF-museum (facing east).

Room 10009 had two 140cm beds, was very clean, and on all levels vending machines have snacks, cold drinks (25php) and cold water bottles (20php). Downstairs opposite the reception is a buffet breakfast at 420php, and for more eating a McDonalds restaurant is located in the same block, or at the other side of the road there is the Resort World Mall (shops, foodcourt, casino). Life is very cheap for us Europeans as 10 Pesos is 18 eurocents.

Manila is not so busy like Hong Kong or Tokyo Narita, but a steady flow of aircraft are present in the morning and evening. Afternoons have some quiet moments.

There are two runways, 06-24 and 13-31. During the five days I was here all landings and takeoffs were done on runway 06. Runway 31 is sometimes used for a DHC8/ATR72 takeoff but a minute later they use runway 13 for a bizjet takeoff.

There are three terminals at the airport. T1 is the international terminal and close to the holding point for runway 06 and the cargo area. T2 is the Philippine Airlines terminal (near the crossing of both runways), and T3 is the domestic terminal for Cebu, Zest, Airphilexpress.

From the hotel, facing west (only on the highest floors) you can see some stored aircraft (3x YS11, 1x An24, 1x Yak40, 1x Connie). Not all of the stored aircraft can be seen as there should be some DC-3’s and DHC-7’s stored here as well. From the roundabout near T3 partially blocked views can be had of some 737-200’s and DC-9’s that are stored. A ramp tour would be very nice but they (airport police) never replied on my requests for this.

When you take a taxi or shuttlebus to/from T1/T2 you might see some aircraft parked between the various buildings but it is not possible to see all from outside. Very frustrating.

I hope this info is of use for someone going here soon.

You can find guides to spotting at Manila Airport and many others in Asia, Australasia and the Far East in my book, Airport Spotting Guides Far East and Australasia.

Order your copy now at this link.

Hey ! Im looking also for an opportunity to capture some planes on NAIA.
I hope you can share some pictures that you have shoot !

Would love to have some plane spotting soon. If you’re free, lets goooo

Hi Matt,
My partner, Kirsty, and I spent a few days in Manila in late February this year. We stayed at the Belmont Hotel in room 927 on the 9th floor, we had requested an airport facing room in advance of our trip and this was our allocated room. Good views of both runways although some of the aircraft at the gates were only visible once they moved but this wasn’t a major issue.
The hotel was very busy as it hosts a number of conferences so breakfast can be quite busy.
Staff are very friendly and helpful. Unfortunately the rooftop pool area was closed whilst we were there so no views were possible from there.
One thing to possibly note for the future is that there was some significant building work taking place in
in the area in front of and just to the left of the hotel (as you look at the airport and the low-cost airlines area) which may lead to some of the Airport views being restricted (the hotel staff were unsure of how high this building was eventually going to be).
All in all a pleasant hotel although the room was a little small, plenty of dining options nearby especially in the Resort World shopping centre less than a 5 minute walk away.

Thanks for the report and update Tony!
Matt