In the 1950s Convair turned to developing a jet airliner to compete with the Boeing 707 and Douglas DC-8. The result was the CV-880, which entered service in 1960.

It flew with airlines such as Delta, Swissair, Northeast and TWA.

In 1961 a stretched variant, known as the CV-990 “Coronado” entered service with American Airlines. It also went on to fly with Aerolineas Argentinas, Alaska Airlines, Cathay Pacific, SAS, Swissair and VARIG amongst others.

Both Convair jets were incredibly fast compared to their peers, but the cost of operating them became prohibitive during the oil crisis of the 1970s and the number built was limited by poor orders. One of the most famous examples was the private jet of Elvis Preslie. N880EP started life flying for Delta Air Lines, but was bought by the superstar and is now on display outside his Graceland mansion in Memphis.

Today a handful of examples survive, mostly at Mojave Airport in California. Here are the details: 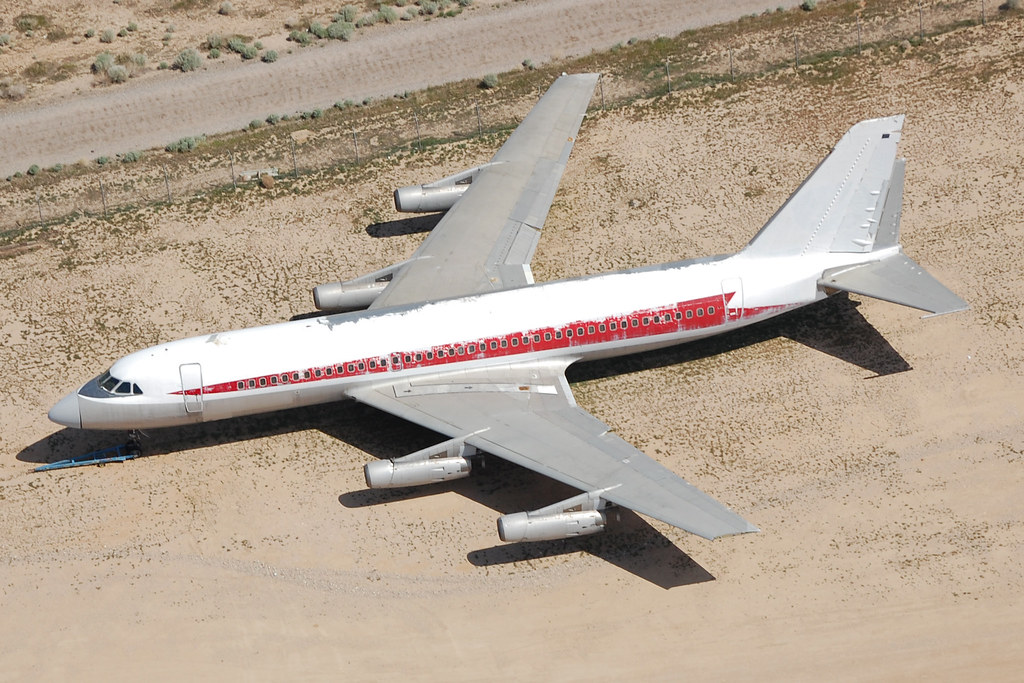 Convair 880 N88CH preserved as a home in South Africa (from Google Maps). The interior of HB-ICC on display at Lucerne in Switzerland. By Prijs at the English language Wikipedia [GFDL, CC-BY-SA-3.0 or GFDL], from Wikimedia Commons

No Convair 880s or 990s are airworthy following the attempt in the 2000s to get one back in the air; it’s unlikely any will fly again.

I flew a roundtrip ORD-PHX in March of 1964 on 2 AAL 990s! I was so excited because it was a new type for me. My dad was a AAL employee.I spent the westbound flight in the first class lounge, which was then an assigned seat.

Happy days Chuck! Must have been great to experience the 990.

Worked for AAL as a mechanic in the late 60s and remember the 990s well. They were such gas hogs – extra fuel tanks were installed and that was probably the reason they did not last long.

Their fuel consumption had nothing to do with why the 880’s had relatively short careers. They were built to create a new market for ships that were smaller and faster than the 707 and DC-8. It was a commercial market that never really took hold. The 880 was considered a commercial failure and was why Convair ultimately pulled out of the passenger ship market.

880’s were fast. Faster than their contemporaries. That probably had something to do with their fuel consumption. Last I heard, the movie studios were lobbying hard to buy both the remaining 880 and 990, so they could blow them up for a movie. I hope they decide to keep them intact.

Thanks Perry. I really hope that doesn’t happen to the precious remaining aircraft!
Matt

Flew in all the Swissair 990’s as a child when they were used on Geneva London & Zurich London routes – very odd seeing a plane that you travelled on as a museum piece – Swiss Transport museum Lucerne. Used to watch them all the time as a young plane spotter in Geneva – my main memory is a very rough landing there where all the contents of the overhead “baskets” – they were not lockers in those days – flew across the cabin to the other side, then the same thing the other way as it bounced back! No damage but chaos as everyone tried to retrieve coats bags etc from their neighbours!

First flight (15 years old) was on an American CV990 from DTW to JFK in late 1963. I distinctly remember the take-off. The sound, The vibration. The angle it took off on. Then a charter flight DTW-LAS-DTW on Modern Air in mid 1970’s. Same experience! Great flying machines!!

There’s the nose section of a Delta 880 on display at the Delta museum in Atlanta, GA.

In 1956 we flew to Alaska on a 990. It was a thrilling flight, looking down at the mountains and glaciers, A year and a half later we flew back on a jet passenger plane. It was a big disappointment. You were now flying at 30,000 feet instead of the 12,000 to 15,000 feet of the Connie. It was a flight in that Convair 990 that I will remember and see over and over in my mind until the day I die. I wish the younger generations could have a chance for such an experience.