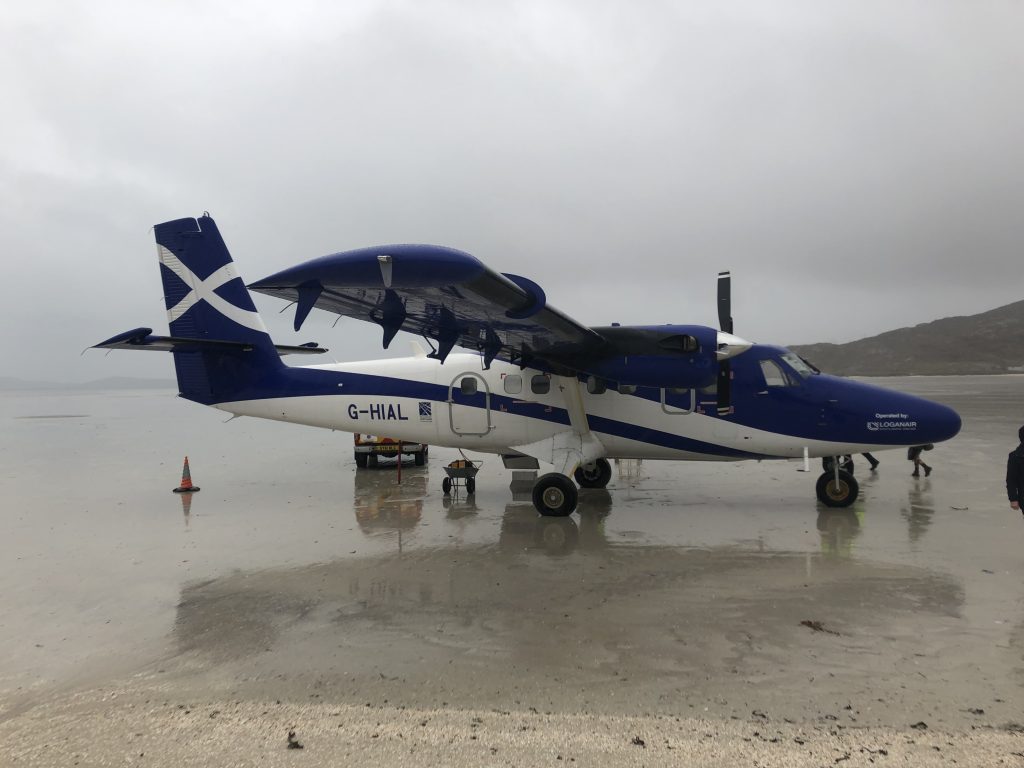 One of the most famous ‘bucket list’ flights for most enthusiasts is the world’s only scheduled landing on a beach.

The island of Barra in Scotland’s Outer Hebrides is too small and rocky to build a regular runway, but the community there rely on lifeline connections to the mainland by air and sea.

Therefore a large, wide beach at the northern end of the island has acted as Barra’s airport for many years. Here, suitable aircraft can land when the tide is out, and a small terminal on the shore handles the small number of passengers and freight each day.

Eager to tick this off my list and experience the beach landing for myself, I booked to travel on one of the two daily flights from Glasgow operated by Loganair – Scotland’s national airline.

I had booked Loganair’s special day return Barra Beach Landing Experience deal, rather than booking through their regular system.

I travelled up to Glasgow the night before, staying at the airport’s Premier Inn. On the day of travel, a big storm had been passing over the UK and I didn’t hold out much hope that the flight would go ahead. 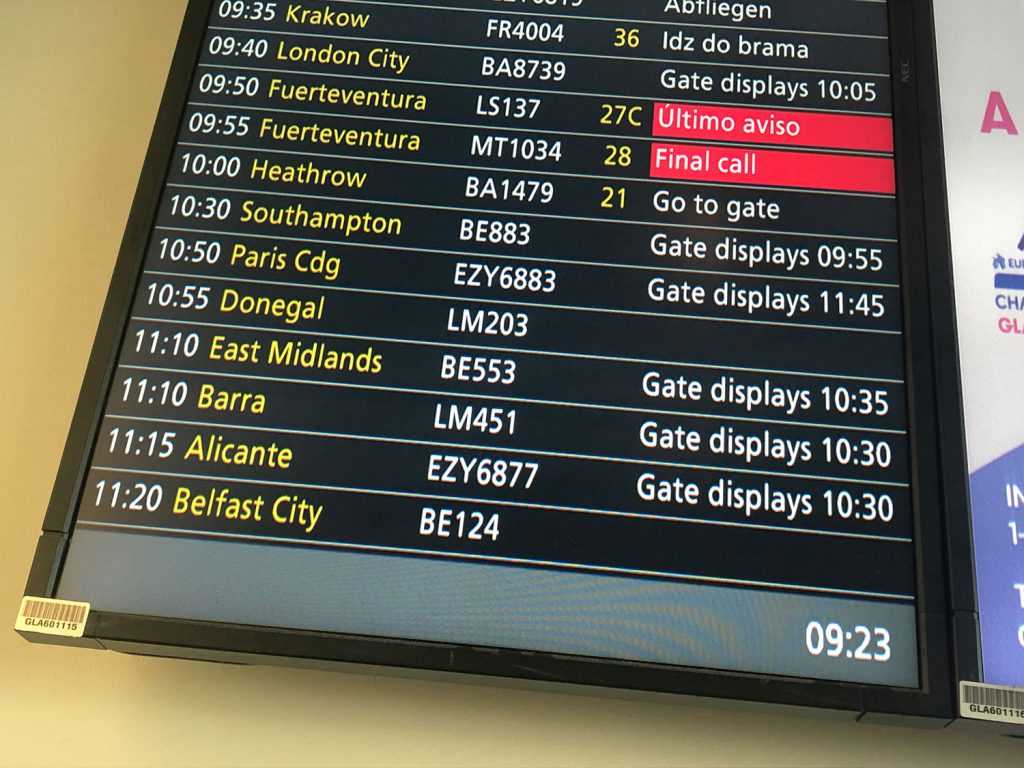 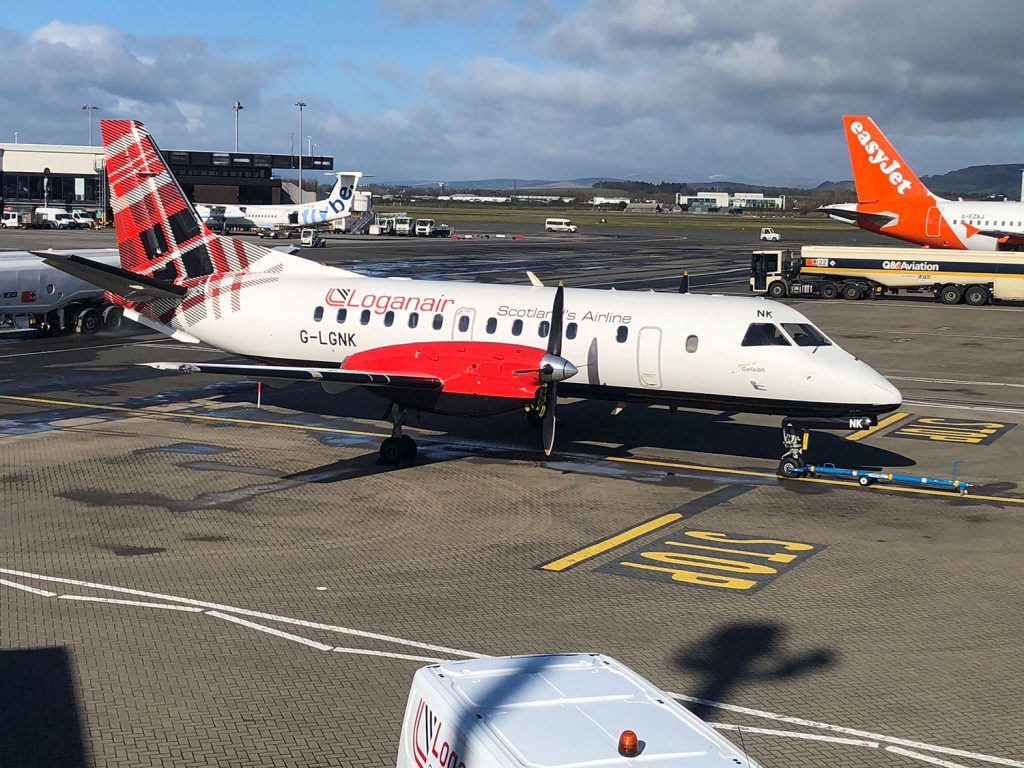 At the check-in I was told there were no cancellations at present, so I continued through to departures and enjoyed some breakfast.

When the gate was announced I headed to the domestic pier where a number of gates are assigned to the regional services operated by Loganair across the UK, Ireland, and to the many highland and island airports across Scotland.

The airline operates DHC-6 Twin Otter aircraft to Barra, and their older -300 model G-BVVP was sat at the gate when I arrived. Ominously, an engine was running and a maintenance van was sat alongside.

Sure enough, after a 30 minute wait we were told to head to another gate. Here, the more modern Viking DHC-6-400 G-HIAL was waiting. We were soon walking out to board the tiny 18 seat aircraft. 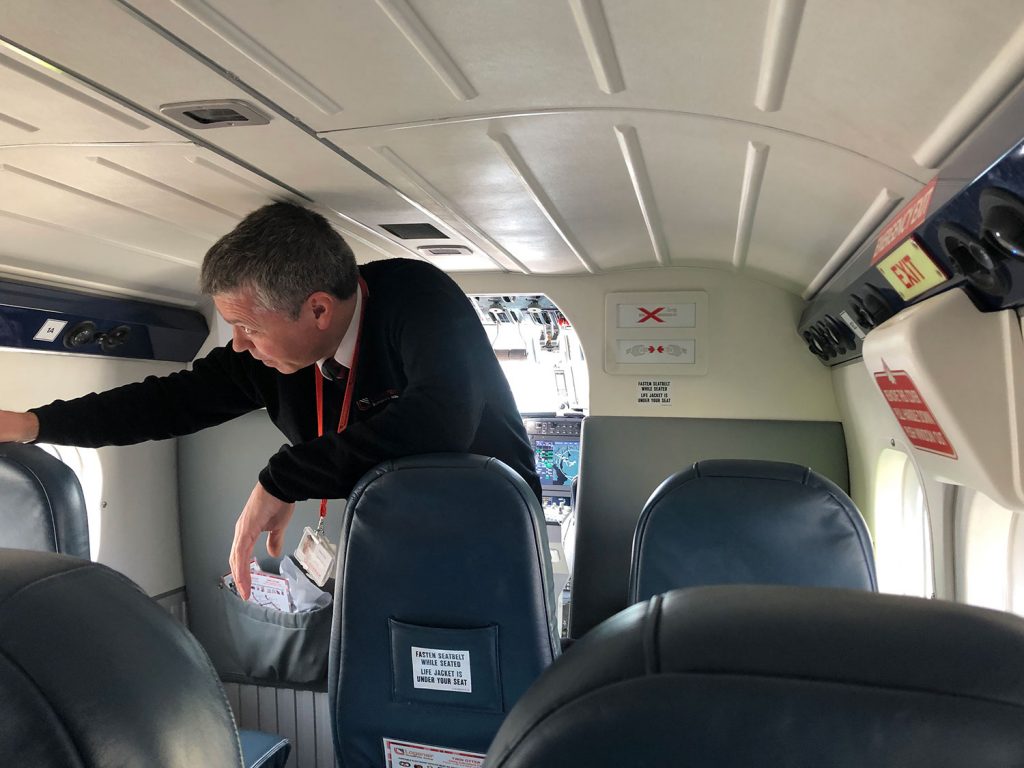 It was interesting to have a clear view into the cockpit; the co-pilot soon came back to give us a safety briefing since there is no cabin attendant.

Around 45 minutes behind schedule we were taxying out to runway 23 at Glasgow for a very swift departure. The DHC-6 is known for its short take-off abilities, which is why it’s perfect for operations at Barra.

Flying north-west, our route took us out over the scenic mainland coast and across the length of the island of Mull. Then we coasted across the choppy seas towards Barra. 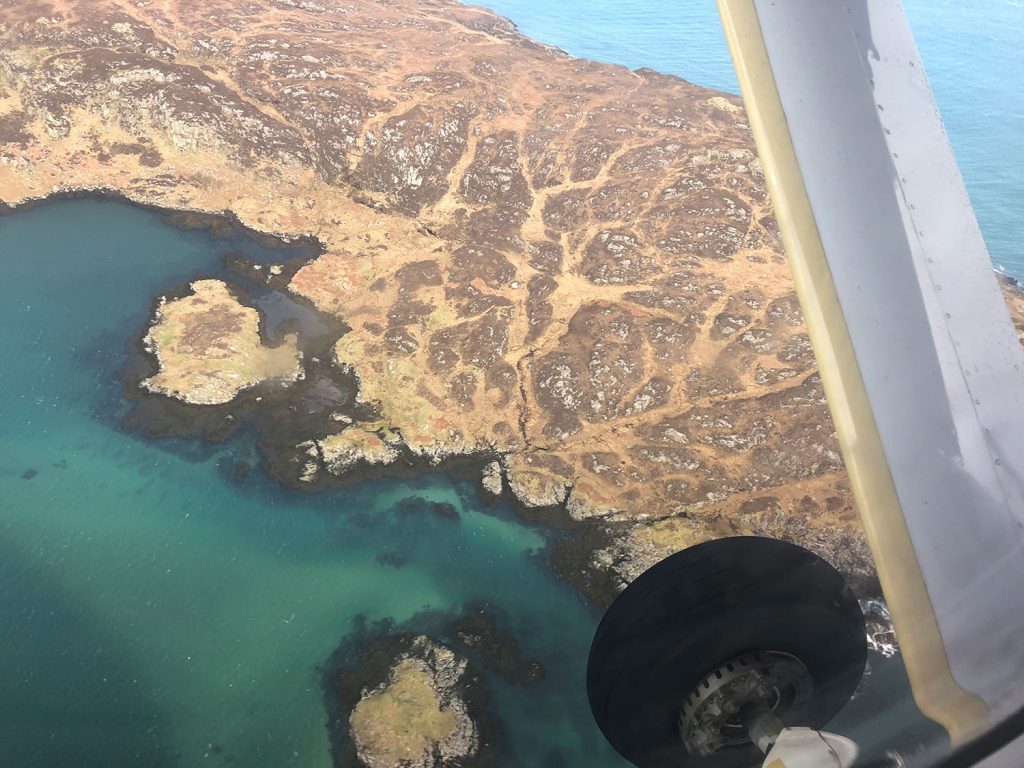 I was glued to the views the whole time – Scotland is stunning.

The flight took around an hour, and as we descended towards the waves some small islands started to come into view. Glancing through the cockpit windows, I could just make out the shore approaching.

As we got closer to hitting the water, sand suddenly appeared and the aircraft’s giant wheels settled onto it very smoothly, with a little spray as we passed through small areas of standing water. 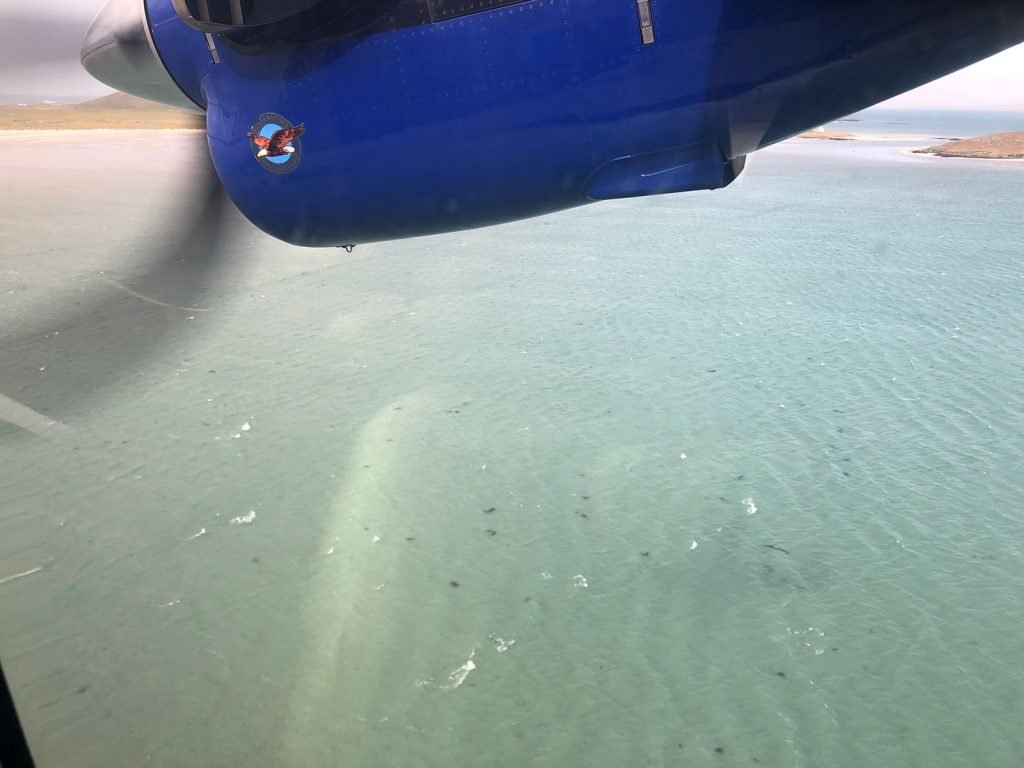 Landing at Barra. Is there a runway? 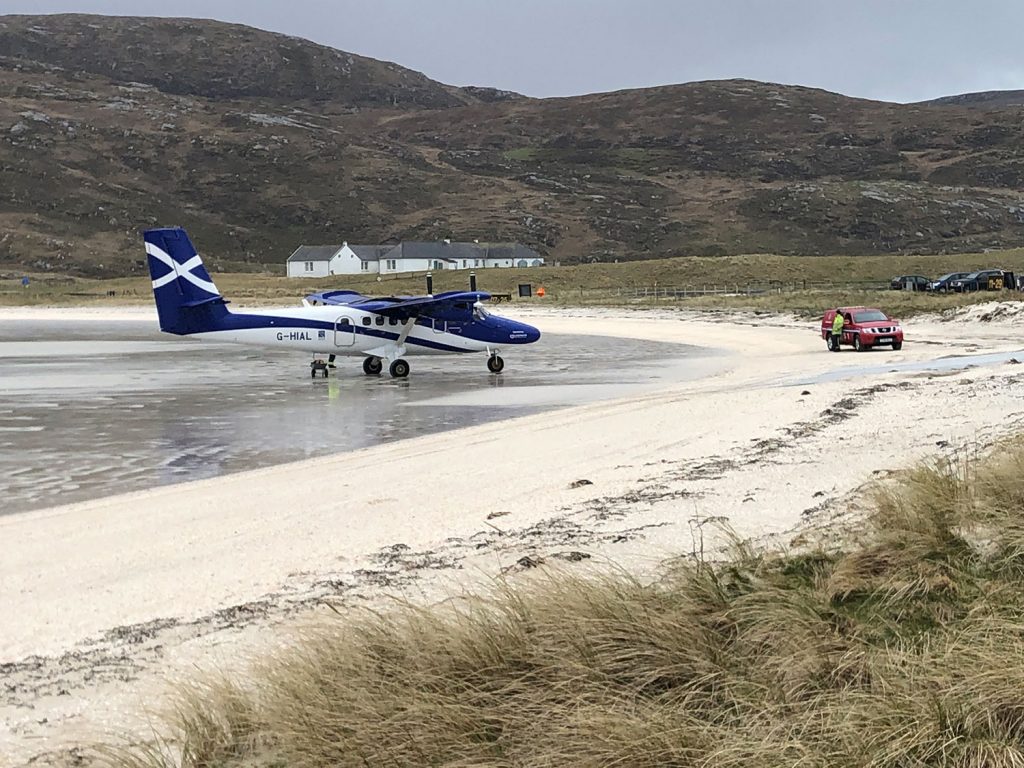 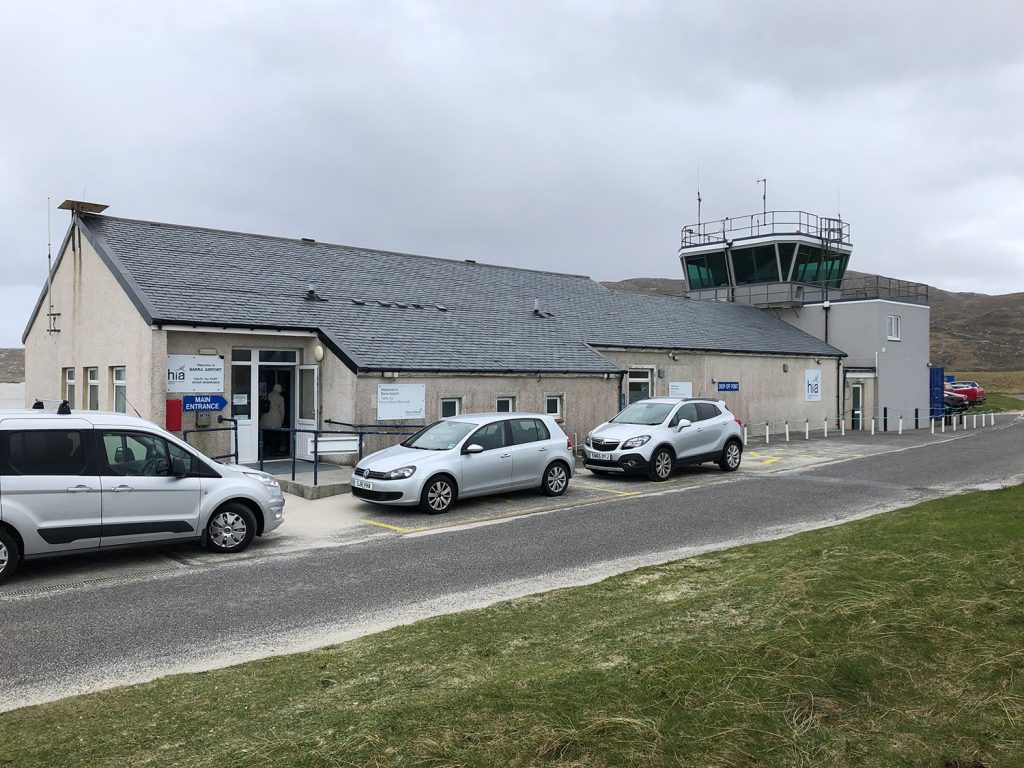 The airport terminal at Barra

The day trip experience gives you a few hours on Barra to explore. The main town of Castlebay is around 9 miles away, with taxis available at the tiny terminal.

I chose to take a walk in the bracing wind north from the airport, where the views across the bays of multi-coloured waters – even after a storm – were amazing.

Back at the terminal, there is a nice café serving hot and cold food. I enjoyed some lunch and waited for news of the return flight… and kept waiting. 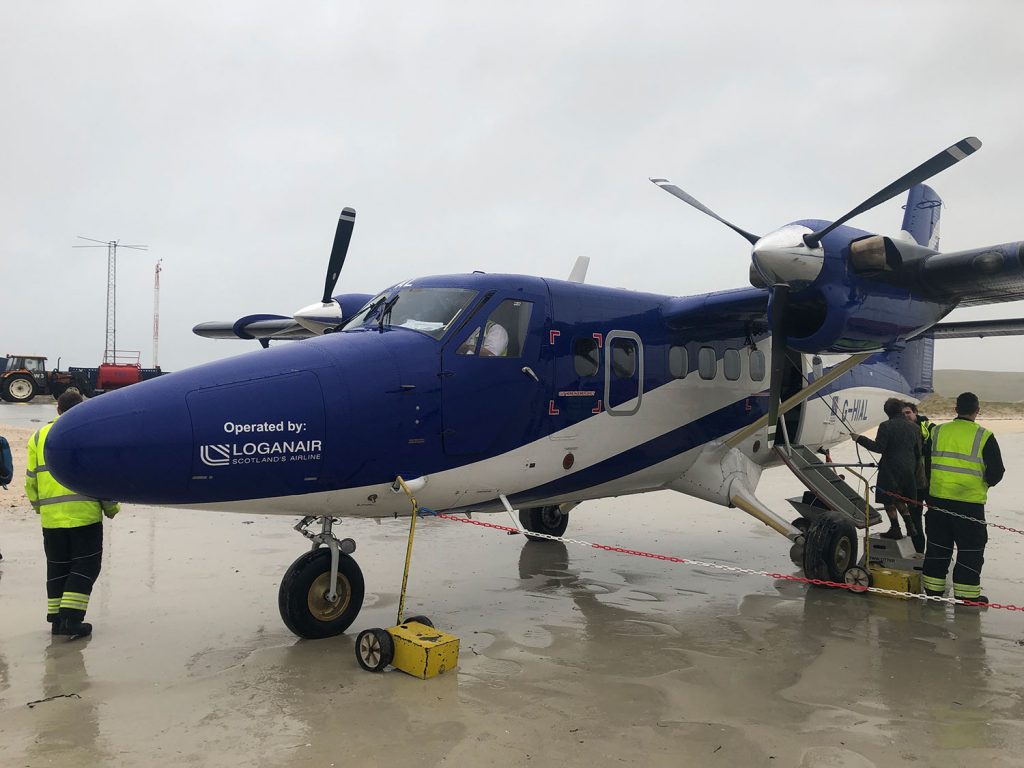 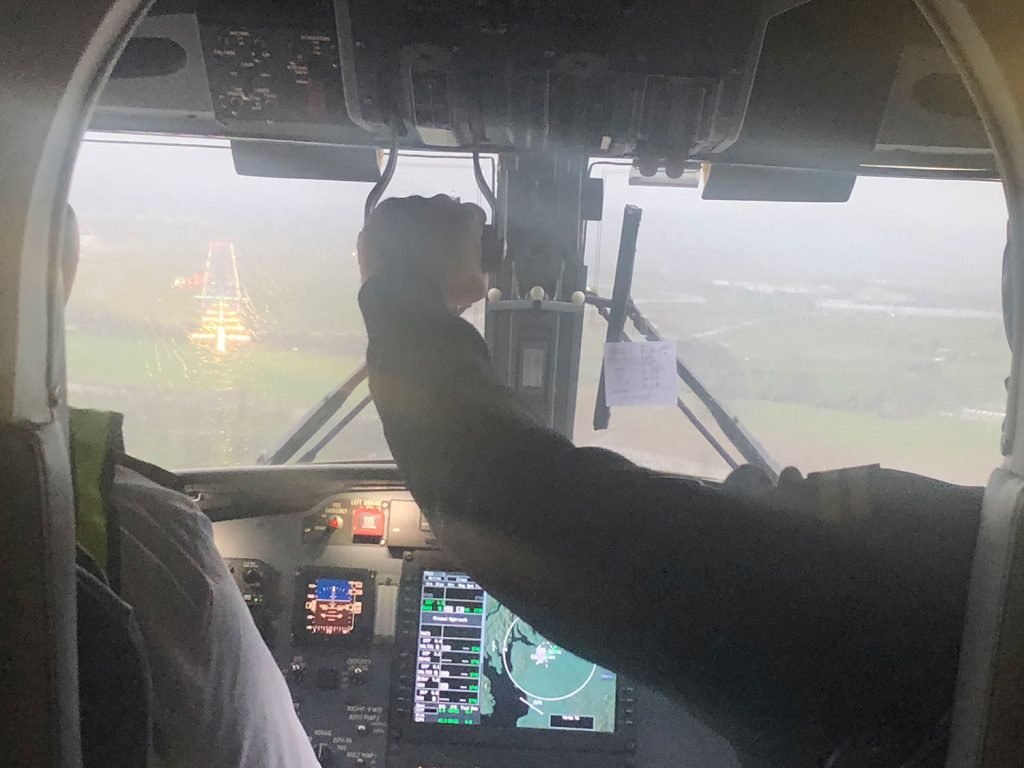 When our departure time came and went, I heard some other passengers talking to an airport employee, who was explaining how the aircraft often attempts a landing but turns back if the weather closes in. Looking outside, the beach was disappearing in rain and low cloud.

After what seemed like an eternity, someone spotted lights across the bay, and soon G-HIAL once again was touching down. It had found us!

The staff were quick to get us boarded, with us trudging across the sandy and wet ‘apron’. This time I was seated on the opposite side of the aircraft (it has a 1-2 configuration).

We taxied out across the sand and made a powerful, quick takeoff, climbing up over the terminal and hills before turning right on track Glasgow, disappearing into the murky cloud. We didn’t emerge from it until descending near the city, landing shortly after.

Here’s a video of my day trip Barra beach landing experience, showing both take-offs and landings.

This was an amazing experience. I’m not sure what would have happened if I’d got stuck on Barra – there are not many hotels and the airport closes when there isn’t a flight due. But it all added to the experience and fun of the trip.

How to Fly to Barra for the Beach Landing Experience

For anyone wishing to experience the Barra beach landing flight for themselves without staying on the island, Loganair offers a special day return option, leaving Glasgow on the morning flight and returning on the late afternoon flight. Visit https://www.loganair.co.uk/barra-beach-landing-experience/ or call 0344 800 2855 in the UK.

It is an amazing experience, the people on Barra are lovely and very accommodating, and they would have found somewhere for you to stay if needed!