A report by Martyn Cartlege.

The Airbus facility at Hamburg/Finkenwerder (XFW / EDHI) is one of a number of manufacturing and test sites around the world housing Final Assembly Lines or FALs for all of Airbus’ single aisle aircraft. Its thousands of employees work not only in the assembly of these aircraft but also in the design offices playing a pivotal role in the development of all Airbus aircraft.

The site is also home to Airbus’ 24/7 spares centre housing 120,000 proprietary parts in addition to the A380 major component assembly hall – which houses the structural assembly and equipping of the forward and complete rear fuselage sections. Once complete these sections are then sent to Toulouse on specially built roll on roll off ships for final assembly only to return as part of a complete but empty aircraft for cabin furnishing, painting, test flying and ultimately delivery to customers either from Hamburg or back to Toulouse to be delivered from there.

In addition, the Hamburg plant manufactures and equips the rear fuselage sections for Airbus’ A330 and A350 XWB programmes as well as being the logistics hub for Airbus FAL in Tianjin, China and Mobile, Alabama. All major components are collected and shipped from Hamburg.

The facility is located to the west of the city directly adjacent to the River Elbe.

The airfield is exclusively used by Airbus for such operations as corporate shuttle and Beluga freight flights, however it is the test and delivery flights, mainly for the single aisle family of Airbus aircraft that are of the greatest interest, with aircraft liveries from all parts of the globe gracing the aprons and taxiways.

The viewing area is situated on the N033 Neßdeich road and has a free to use car park that takes around 40 vehicles. It is also possible to get there by bus no 150 originating at the Bahnhof Altona or by changing at the ‘Airbus’ stop on route 146 from the S-Bahn station Harburg.

The viewing platform itself is raised enabling uninterrupted views over a considerable area of the site. It can be accessed by stairs or a ramp and it has information signs not only about the site layout and Airbus in general but also about the greater Finkenwerder area and what it has to offer.

Situated approximately half way down the only runway (05/23) it affords good views of aircraft not only on the runway and taxiways but also the exterior areas of the FALs, the Beluga line station and tantalising glimpses of aircraft tails on the flight line or at the Delivery centre which is right next to the car park. 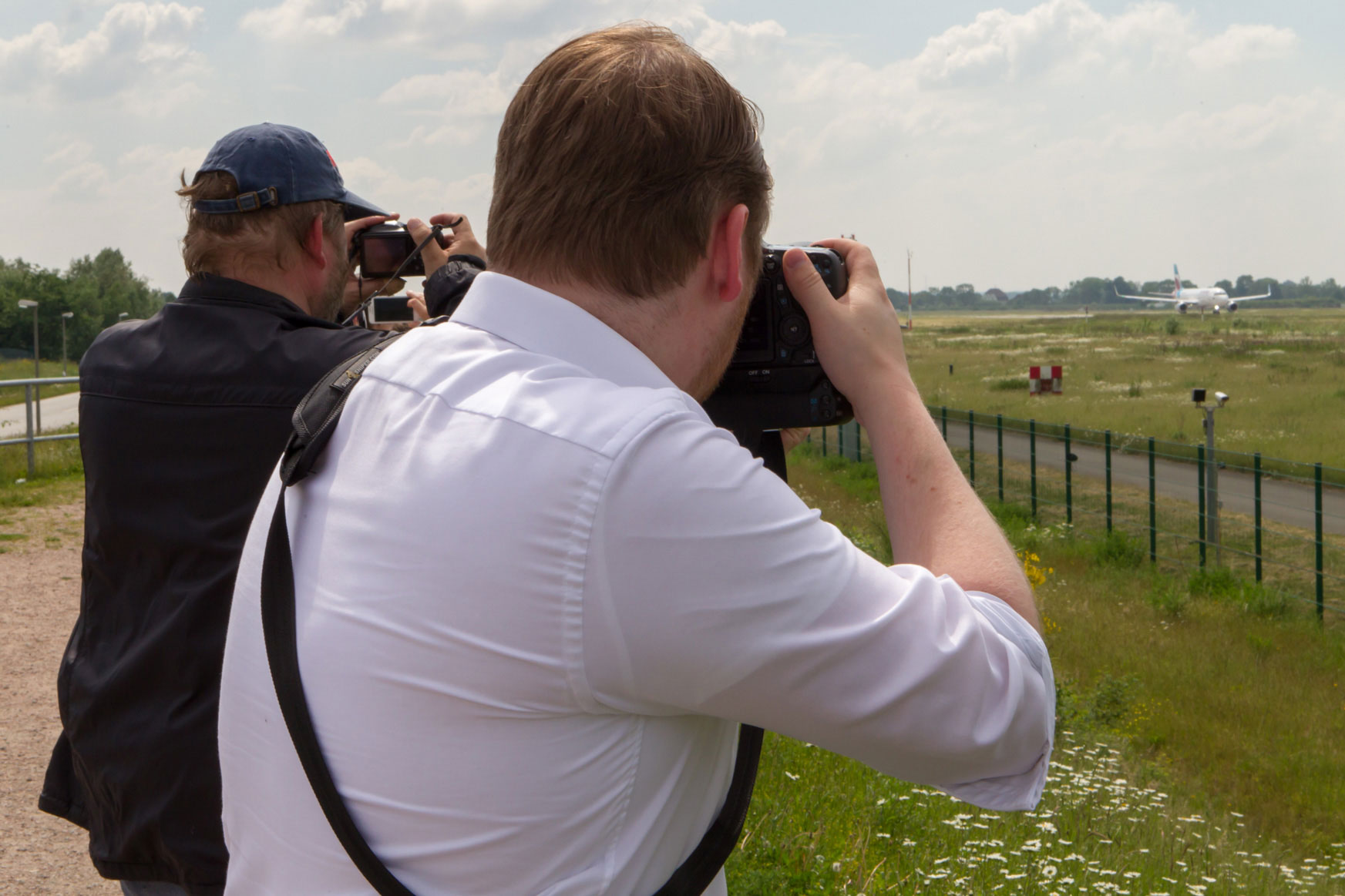 Although not the busiest of airfields in terms of actual movements, aircraft can often also be seen taxying or being towed from one part of the facility to another as well as on delivery and test flights.

It is possible to photograph the action quite easily regardless of runway in use. Departing aircraft are the most challenging as there is the danger that they might be too high by the time they pass the viewing area. That said it is more than likely that you will have had an opportunity to photograph the aircraft taxying out prior to the departure. Arrivals are much better. On R23 not only will you get the landing roll out but the aircraft will then taxi back in front of you with R05 great for touchdown shots but lacking the taxi in shot other than when it is an A380. Lighting conditions vary throughout the day and depend on where your chosen subject. In general if they are on the runway then the best time is 08:00 to 14:00, on the taxiway to and from the Delivery Centre then it is 13:00 to 18:00. 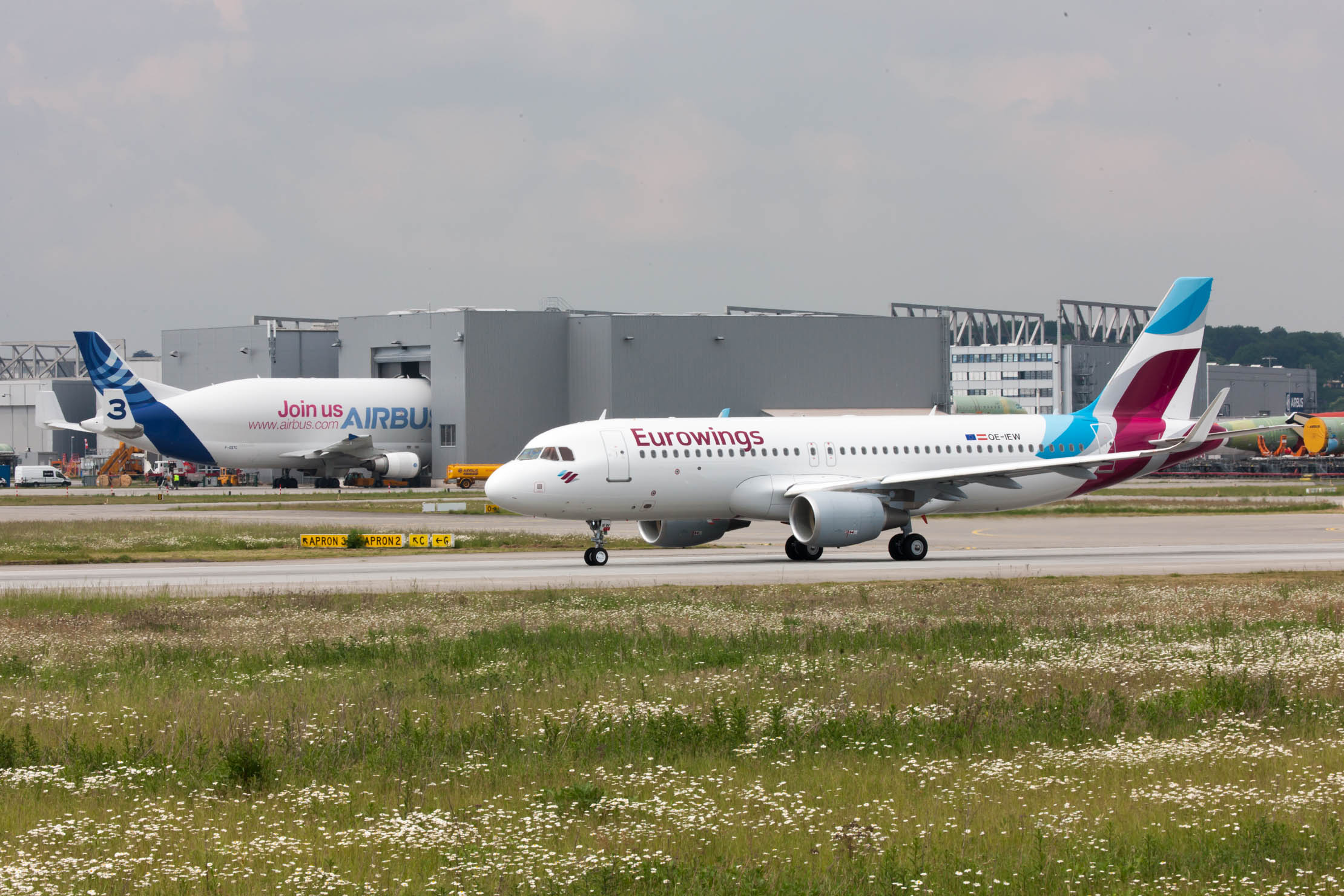 Camera focal length is well within the norm for spotters with 170mm for single aisle aircraft directly in front of you on the runway rising to around 300mm if you are looking for a rotation shot on R05. On the taxiways this can be even less at around 100mm. Prevailing winds however do tend towards R23 usage.

When to see things 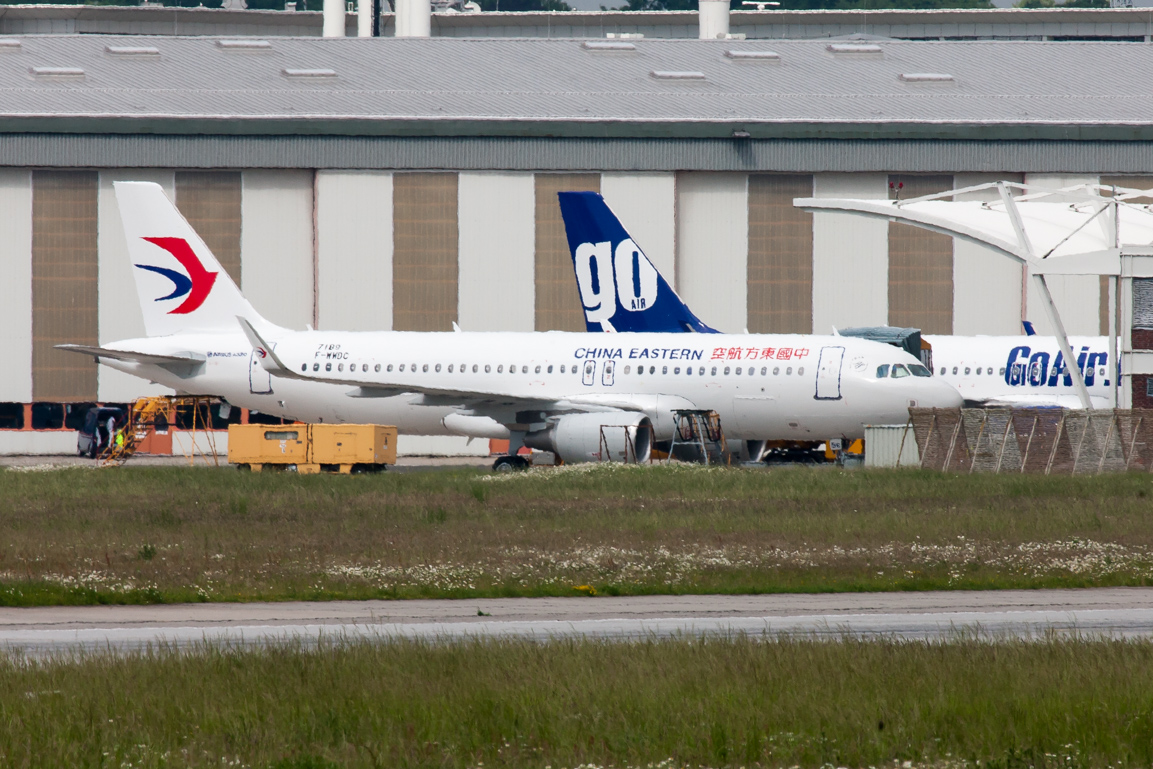 Remember this a production facility and movements can never be guaranteed and being a place of work it is busier on weekdays than on Saturday with operating hours from 06:00 – 22:00. Sunday the airfield is closed. Facilities are very limited, there is no cover against the weather and like most airports it can get quite cold and windy outside of the warm summer months. There are also no toilets nor outlets for food and drink so it is advisable to take everything you need with you. Fortunately with the car park being so close any items do not need to be taken to the platform with you as they can easily be accessed as and when required. 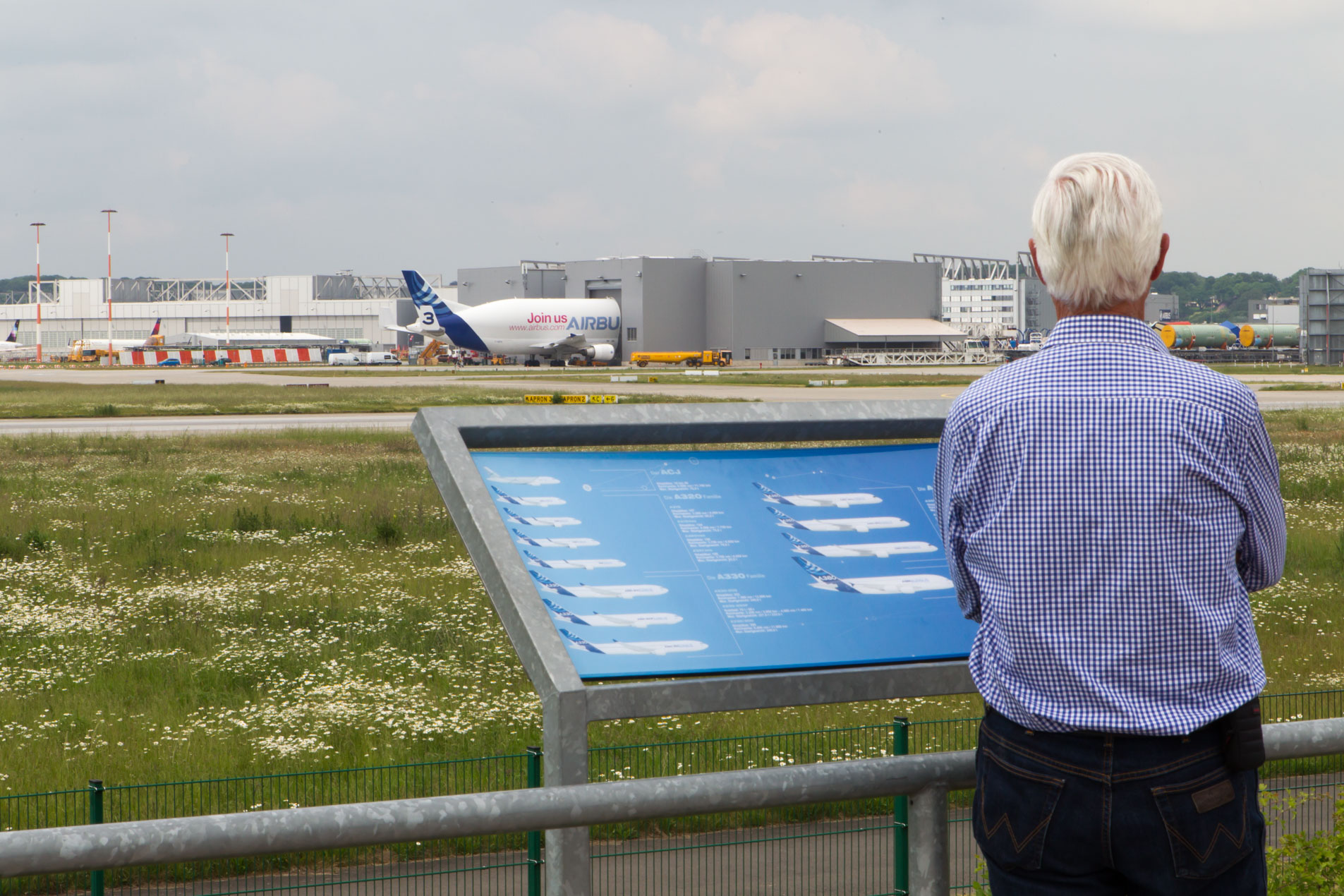 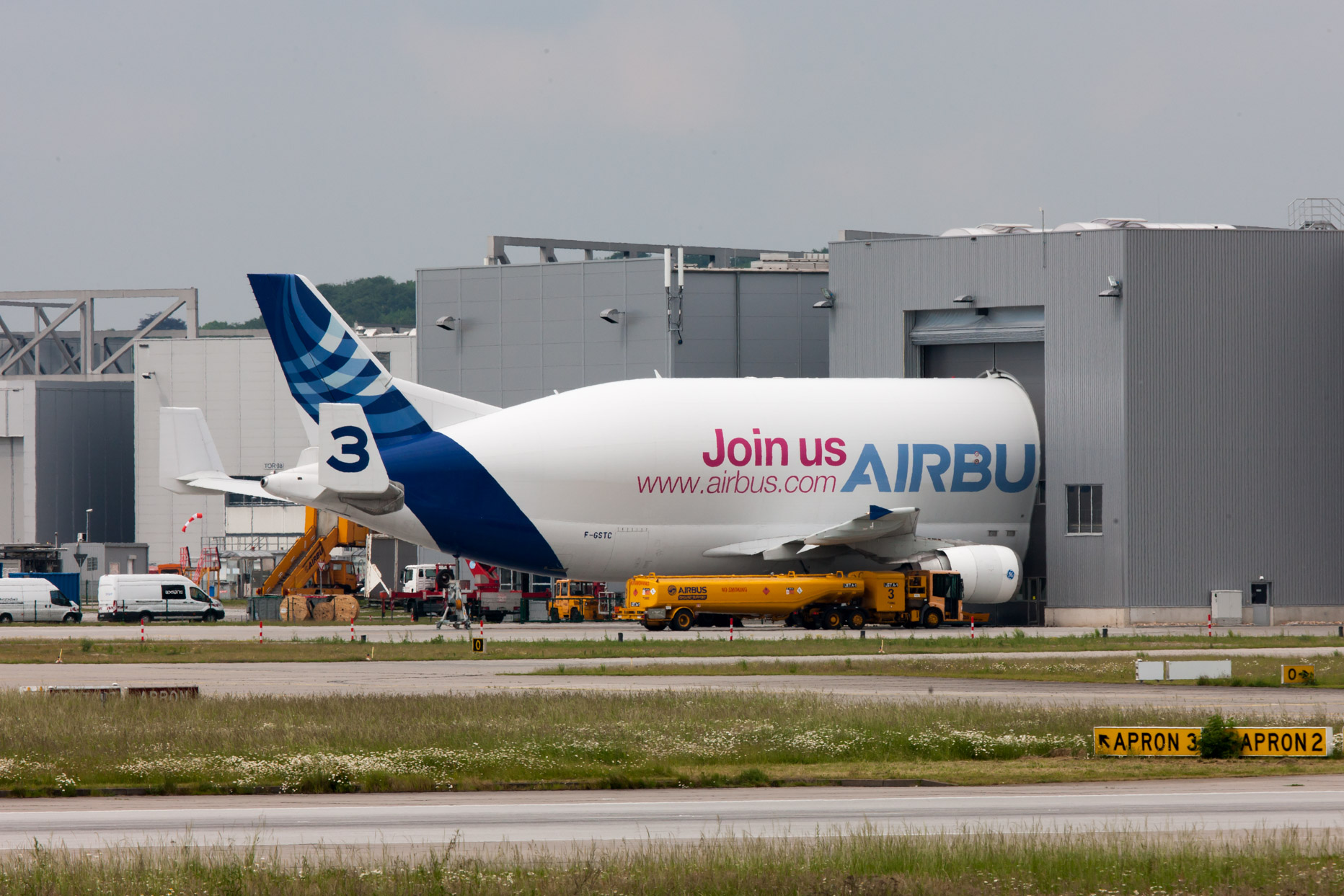 This is really difficult as there is no published timetable for test or delivery flights. It is possible to search online to see what aircraft have been flying recently which may give some indication as to what might be seen but it is a less than precise method! What is possible to see though are liveries from all over the globe, liveries that might not be seen in Europe and from countries where the attitude to spotting and photography is not as positive as it is there.

In the main you will see A320 family aircraft with the occasional A380 movement although these latter movements are reducing quickly and are arguably of little interest, certainly in terms of differing liveries as the remaining orders are almost exclusively Emirates with one to ANA slated for delivery in 2020.

In summary this is an excellent facility where it is possible to see and photograph aircraft in freshly painted liveries from all over the world, just not that many of them in a day! 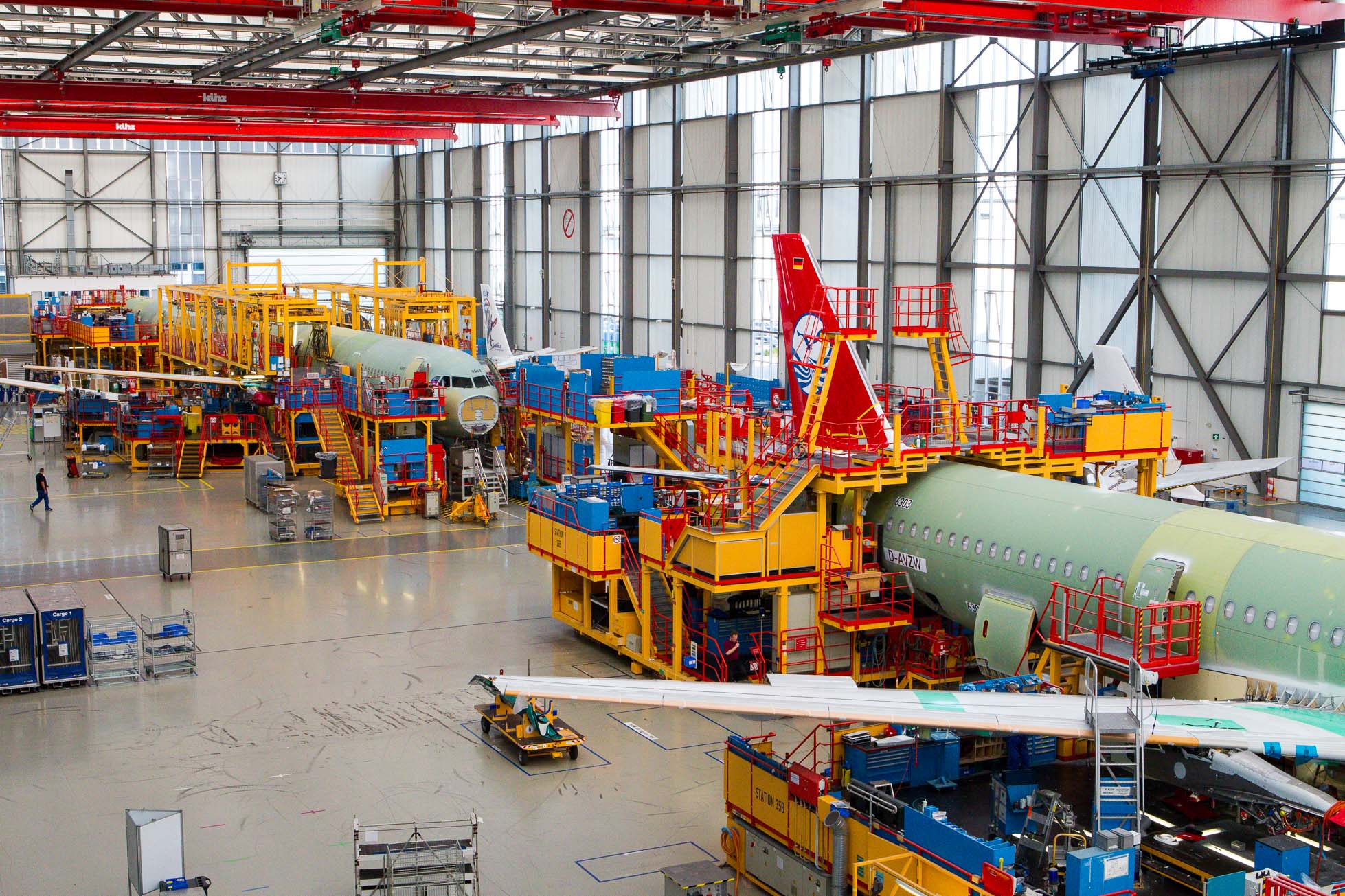 Inside the Airbus factory at Hamburg Finkenwerder.

It is possible to take a tour around the factory at Hamburg Finkenwerder. Operated by a private company called Globetrotter tours it costs €23.90 and lasts approximately 2.5 hours. All bookings must be in advance through their website (www.werksfuehrung.de) 14 days or more before you wish to visit as Airbus requires a certain amount of personal details from you beforehand. Tours are performed in different languages so make sure you pick not only a time that is suitable but a language also. Additionally you have to make your own way to the pick up point, adjacent to the factory main entrance, which can be a little tricky if using public transport. Bus 150 stops here.

The tour consists of short bus ride through the facility to the Visitor Centre where you should always be on the lookout for aircraft as with all Airbus plants, aircraft seem to be tucked away randomly in every nook and cranny of the factory. Please be aware though that no photography is allowed anywhere on site. After a short film on the history of Airbus the next stop is a walking tour of one of the single aisle FALs (Final Assembly Lines) where you will get to see aircraft in different stages of production. Then it is on to see the fitting out of the A380s cabin, this is where customer specific items are fitted into the empty cabin. Naturally this will cease once the final airframe is delivered.

The tour culminates in a bus ride around the facility including the delivery centre. The tour office has a shop with Airbus branded gifts as does the convenience store next door.

Thanks to Martyn Cartledge for this report and pictures.

Our comprehensive guide book to spotting at hundreds of European airports, now in its third edition and recently updated.

The only downside to the tour is that you cannot take bags or cameras with you and unlike the tours at Toulouse there are no lockers to leave the aforementioned items in.
I used lockers at Hamburg Altona Bahnhof but the bus journey is 1/2 an hour each way.