A former Queen’s Flight British Aerospace 146 aircraft has been retired to the British Airliner Collection at Duxford, near Cambridge, UK.

The Royal Air Force BAe 146 Mk 2 aircraft is being retired from active duty with 32 Squadron based at RAF Northolt, and is now being preserved as an example of the most successful British jet airliner ever built.

This particular aircraft, ZE701, started life in 1986 as a ‘Statesman’ model, which had duties involving flying the Queen and Royal Family. It has a VIP interior.

It has since been involved in many government and military roles, and has now come to the end of its life with the RAF. 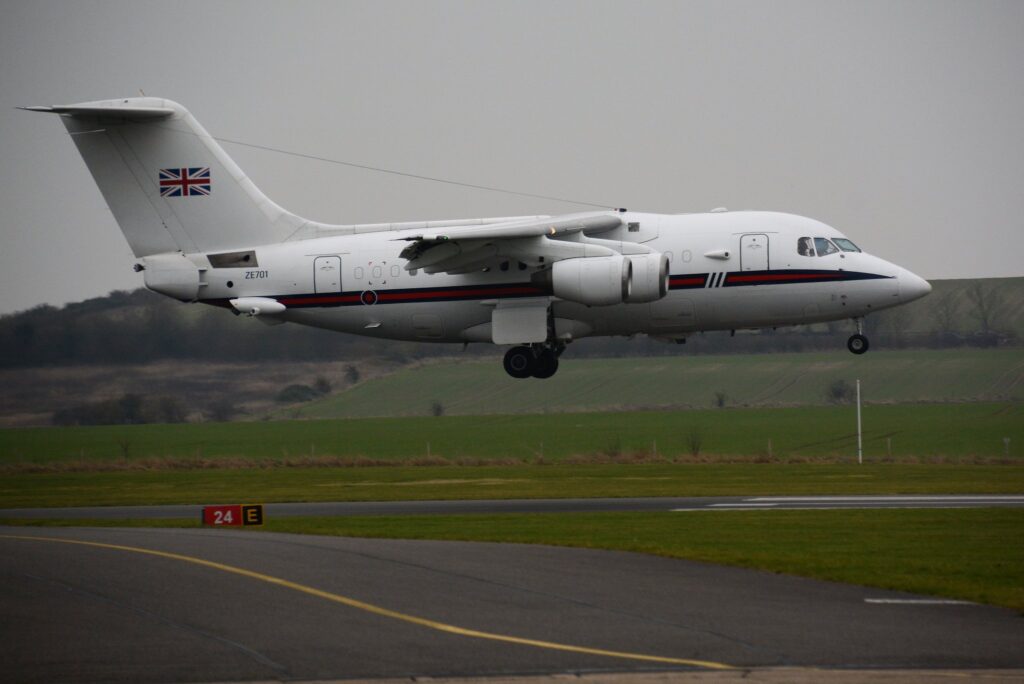 The British Airliner Collection comprises a variety of important commercial airliners which have been preserved at the Imperial War Museum’s Duxford site, and includes aircraft such as Concorde, BAC One-Eleven, Hawker Siddeley Trident, Vickers Viscount, VC10, and Airspeed Ambassador among others.

“The BAe146 aircraft have served the UK proudly over many decades, including during numerous operations including Iraq and Afghanistan. After four decades of service, the aircraft have now reached the end of their service lives and I am delighted that the 146s are going to good homes and joining the collections of two fantastic aviation museums.”

Its arrival has meant that Handley Page Herald G-APWJ is being dismantled and loaned to another museum to make space for the jet.

Another RAF BAe 146 is also to be preserved at the South Wales Aviation Museum at St Athan soon, and two remaining BAe 146 Mk 3 aircraft flown as part of 32 Squadron will also be retired from service, and sold on to a commercial operator.

I loved the 146, it was quiet, it was smooth and comfortable. I enjoyed many a trip from Southampton (SOU) to Alicante (ALC) with Flybe. The black leatherette seats looked smart too.

Great to see the RAF 146 finding a new home at Duxford, sad to see Herald PWJ being moved on. Was at Duxford Aug 2018 and spent a while on the Herald ( I used to do loadsheets for PWJ at Belfast), so hope who ever receives it, will care for it, as only only of 3 fully intact ones left.
Look forward to seeing over ZE 701 next time we are back in the UK…..whenever that will be !