The A340 at 30. Which airlines still fly the original Airbus quad jet?

Over 30 years have now passed since the first flight of the Airbus A300’s ultimate stretch, the A340, an aircraft that, while not quite as successful as it’s main, twinjet competitor, the Boeing 777, had a significant impact on aircraft design and pioneered some of the world’s longest passenger flights.

Today, the Airbus A340 has fallen out of favour with most of its original operators, with the notable exception of Lufthansa, and been replaced by more efficient Airbus A350 and Boeing 787 twinjets.

However, the A340 lives on in fairly significant numbers in the Middle East, with a few flying for other operators further abroad. Today we’ll be taking a look at which operators are holding out with the A340! 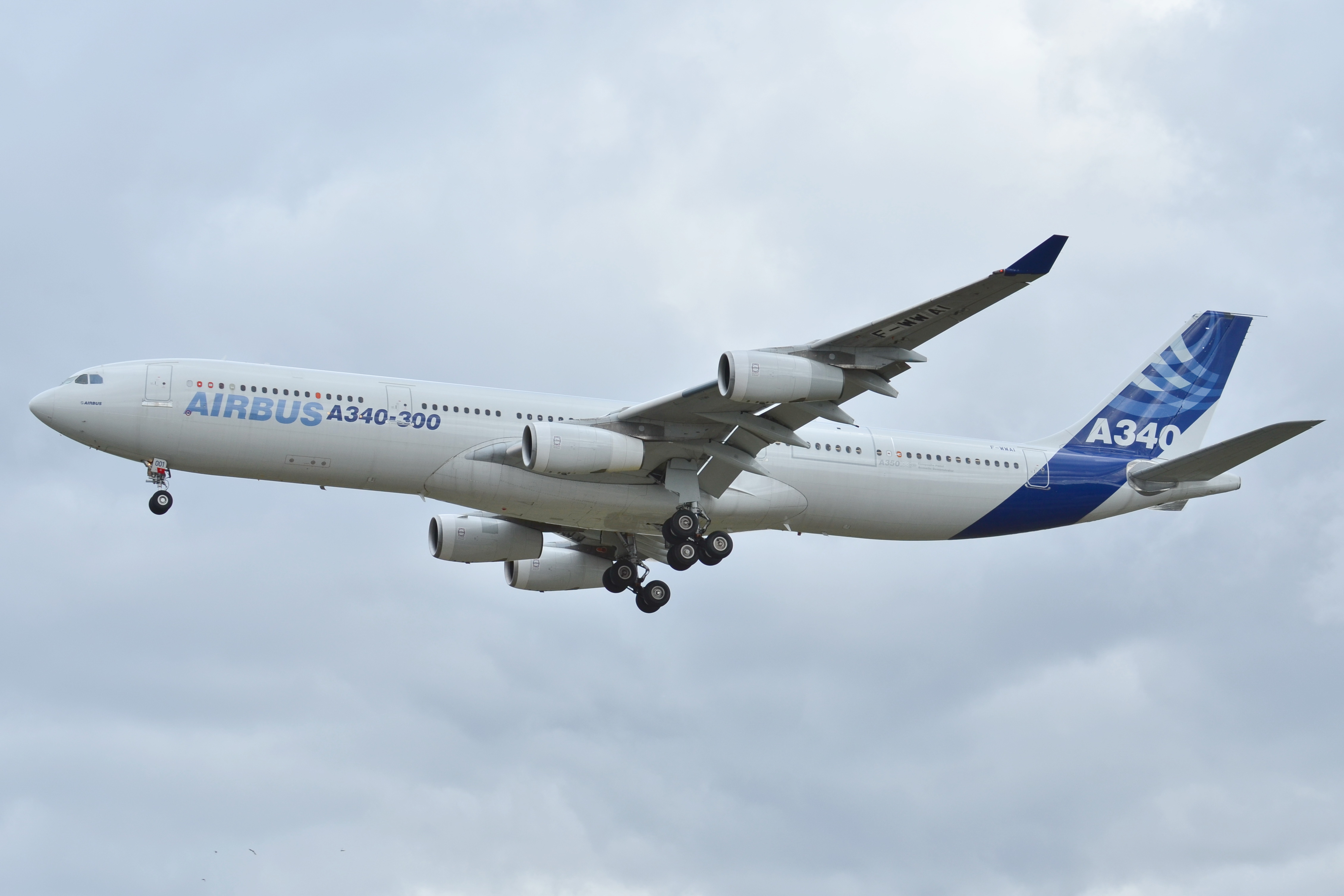 As of March 2022, the region with the most passenger configured Airbus A340s in service is Europe, primarily due to the Lufthansa group’s 31 airframes, plus a few other airlines around the continent with a few aircraft each. 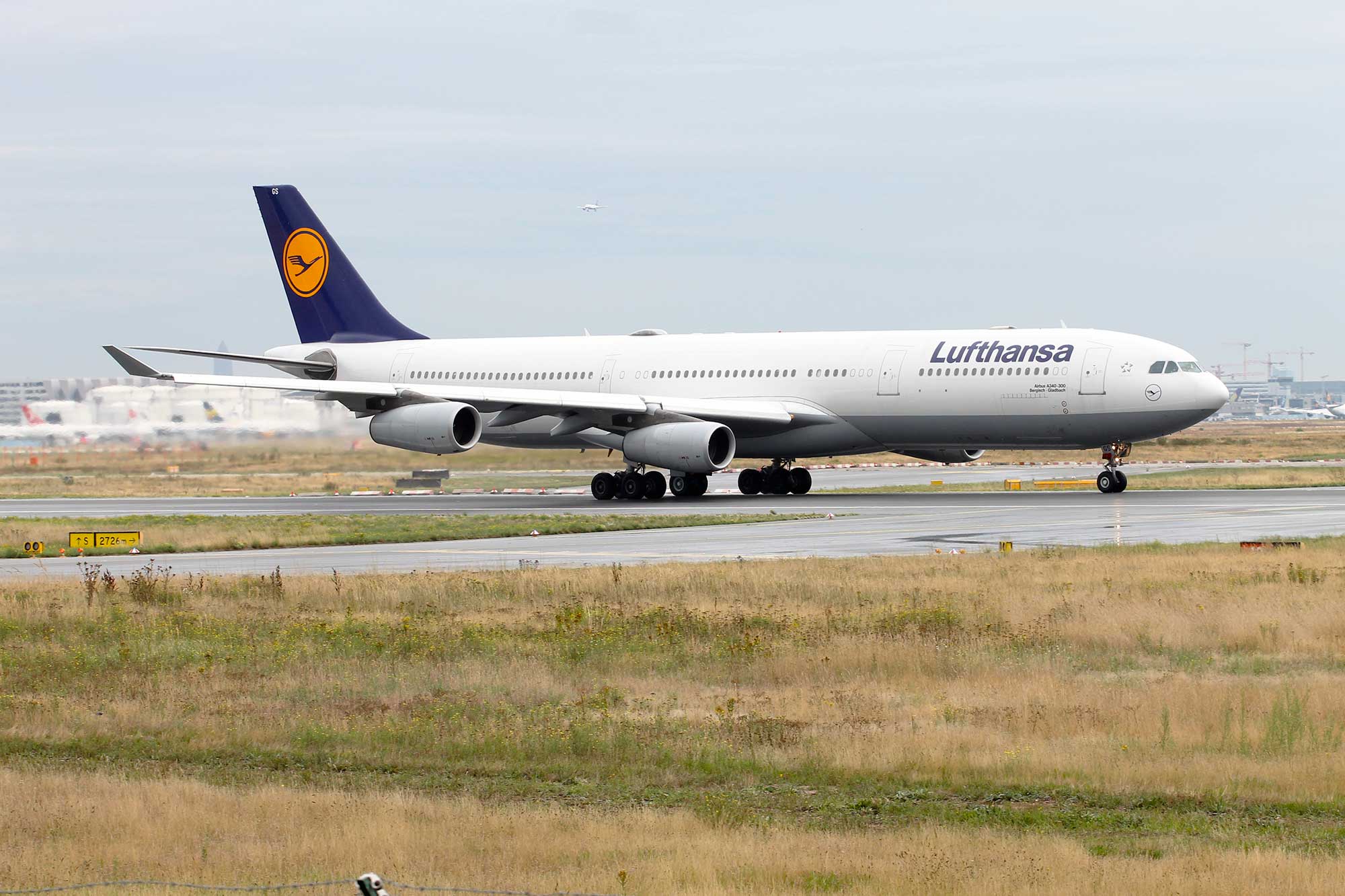 Germany’s flag carrier has flown a whopping 62 different A340s over the last 30 years, of every variant bar the -500. Today however, the airline retains a fleet of 17 A340-300s, and 5 A340-600s, based at Frankfurt and Munich respectively, flying to a select number of destinations across the Asia and the Americas. These aircraft are only being retained temporarily, pending the delivery of the Boeing 787-9, and the remainder of their Airbus A350 order. 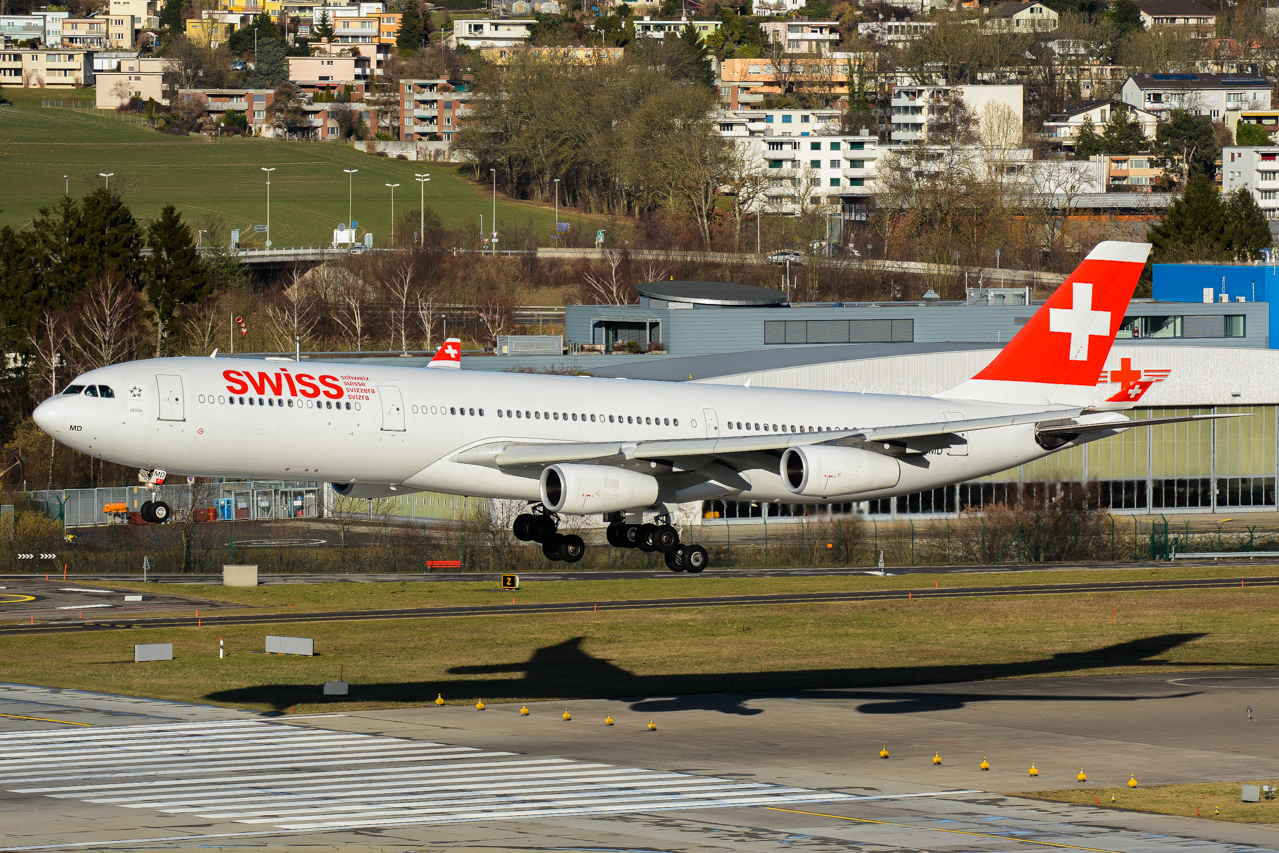 The Swiss flag carrier, and operator of the Lufthansa Group’s second largest A340 fleet, with a modest five of the -300 variant in its inventory. They are currently flown from Zurich to Israel, the United States, Singapore, and South Africa, however the destinations change fairly frequently. Swiss’ remaining A340s are currently set be retired around 2024-2025, also to be replaced by either A350s or 787s, depending upon what the parent group decides to allocate the carrier. 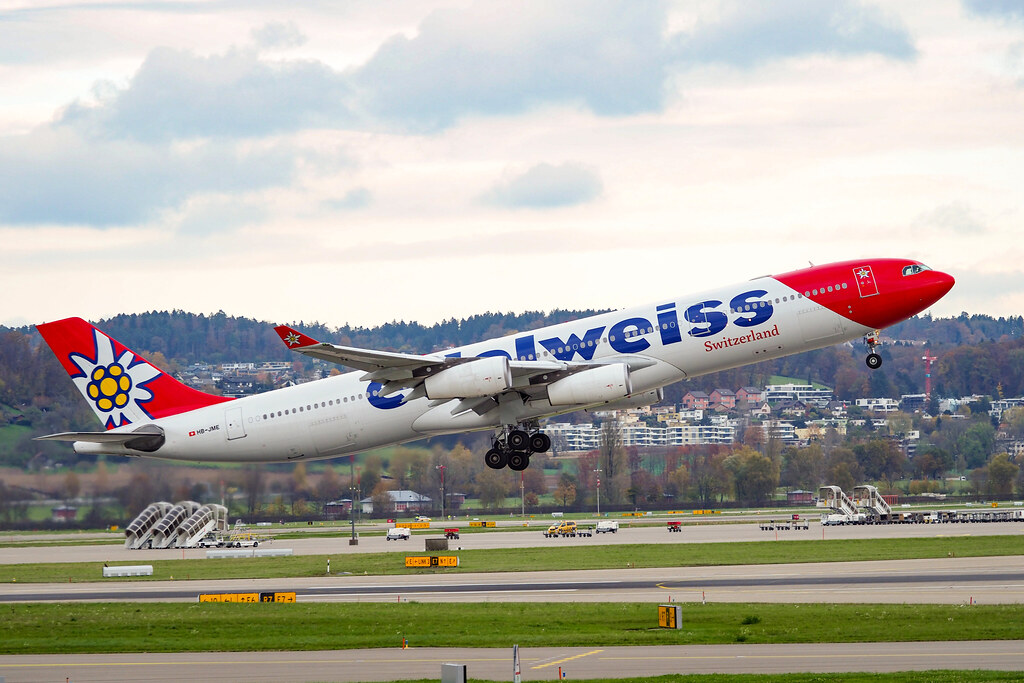 The leisure arm of the Swiss flag carrier, Edelweiss fields a fleet of four Airbus A340-300s, cascaded from its parent carrier around four years ago, which currently fly from Zurich to a number of destinations in the Caribbean, Indian Ocean, Africa, and South East Asia. Edelweiss’ A340s, will be replaced around the same time as it’s parent carrier, and replaced, again, by A350s or 787 Dreamliners. 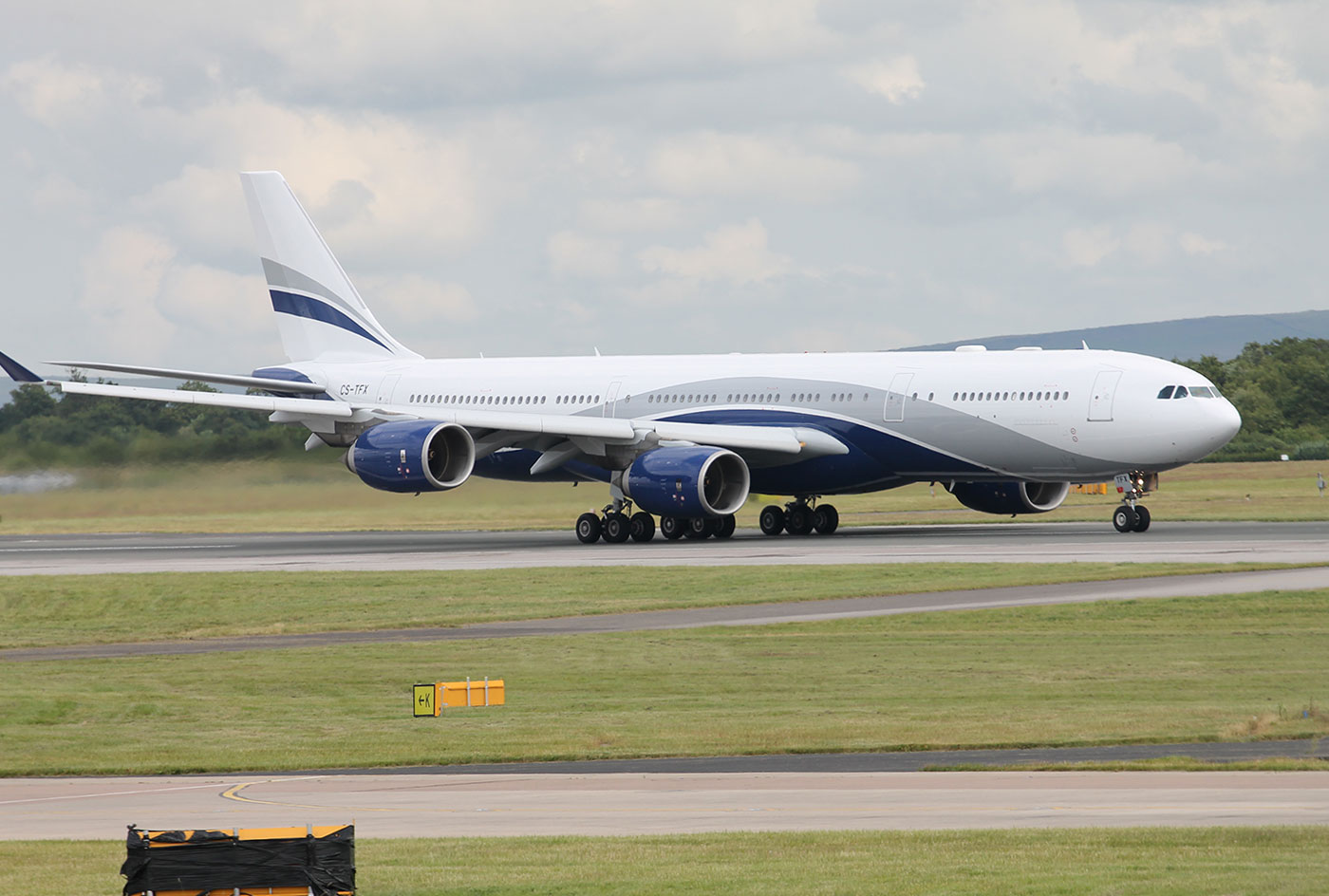 Portuguese charter and ACMI provider, and its Malta based subsidiary, HiFly Malta currently operate six Airbus A340-300s that can be seen just about anywhere in the world thanks to the unpredictable nature of ACMI charter operations. It’d be somewhat difficult to catch a flight on one of HiFly’s A340s, as the airline itself operates no scheduled routes, however they do occasionally enter longer term leases with some airlines, so it’s worth keeping an eye out to get on one, before they are inevitably retired in coming years. 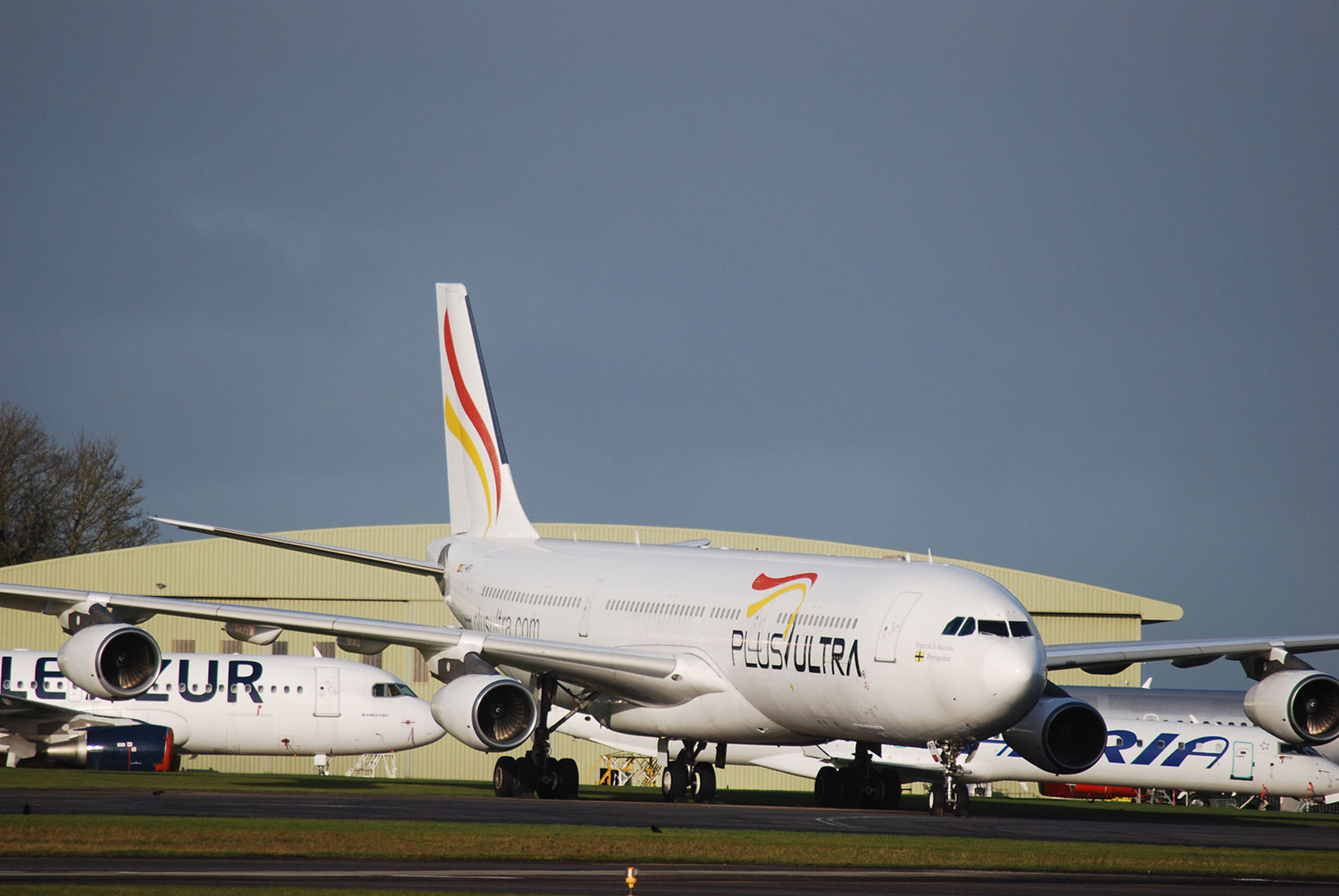 Another Airbus A340 operator from the Iberian Peninsula is Spanish airline Plus Ultra, with a fleet of two A340-300s, and one -600, leased from European Aviation. Plus Ultra’s A340s can be caught on flights from the airline’s Madrid base to South America and Africa, and occasionally to Havana and Buenos Aires as dubious charters on behalf of Cubana, when their own Ilyushin Il-96s are out of action. Plus Ultra’s A340s are to be imminently replaced by three former Air Europa Airbus A330-200s, so your time is running out if you wish to try out a Spanish A340. 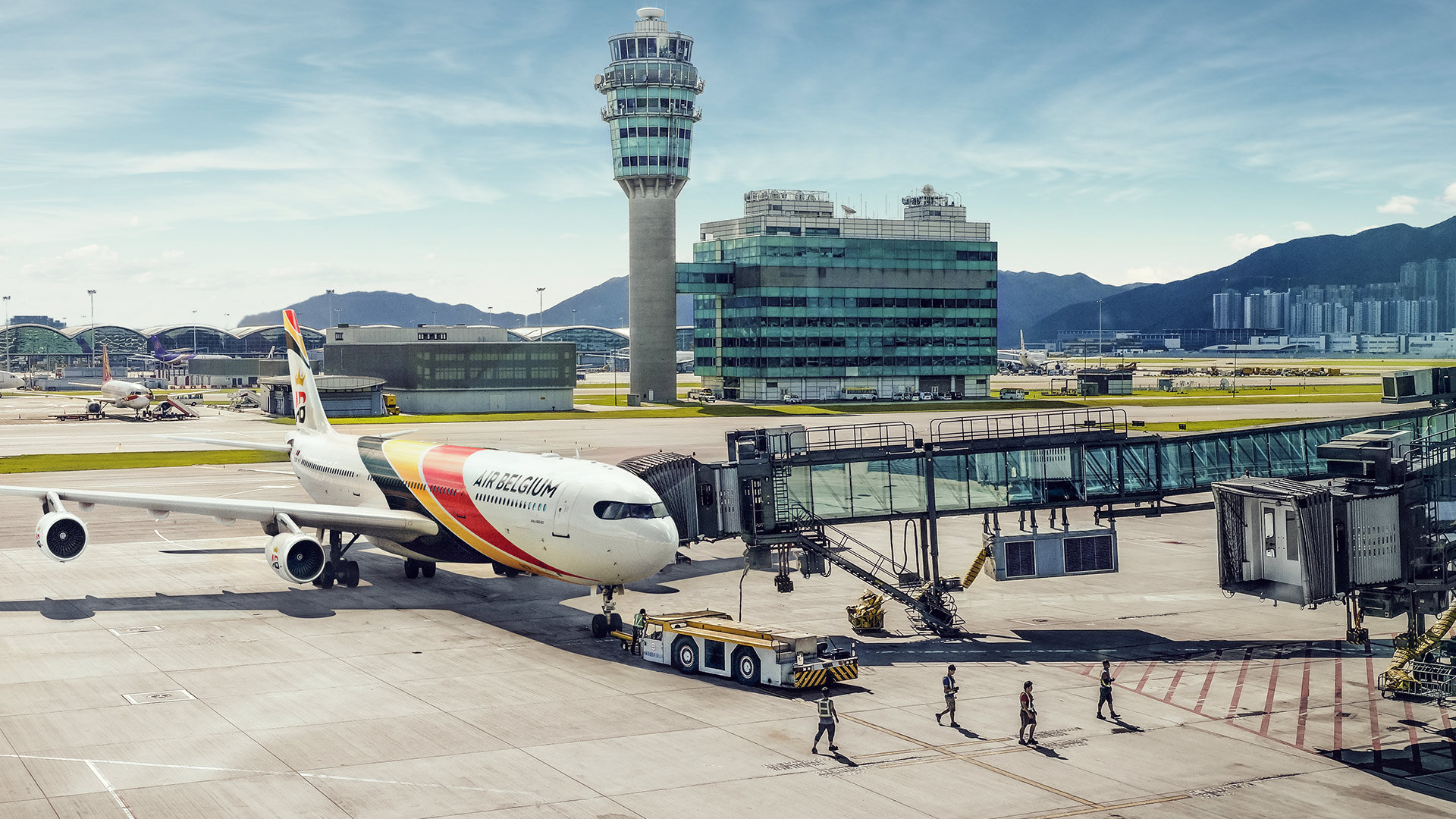 Launched in 2016 with an all Airbus A340-300 fleet, Air Belgium have rapidly replaced the Airbus quad jet with Airbus A330-900neos, with only one A340 left on their books as of February 2022, with OO-ABB regularly flying between Brussels Charleroi and various Caribbean holiday destinations.

In recent years, the Middle East has become something of an A340 haven, in a similar way as the A300/A310 around 10-15 years earlier, with sanctions against various nations preventing them from acquiring brand new aircraft. Many aircraft being illegally exported to Iran, for example, will first be sold to a semi legitimate shell airline in the Caucasus or Central Asia, owned by an Iranian company, and then somehow turn up in Tehran after a few months, before popping out of the hangar in Mahan or Iran Air livery. In more dubious incidents, an aircraft will file a flight plan to, say, Dubai, with Tehran or Mashhad listed as diversion airports, before declaring an unspecified mechanical emergency over Iran and making an “emergency” landing and eventually being reregistered as an Iranian aircraft. 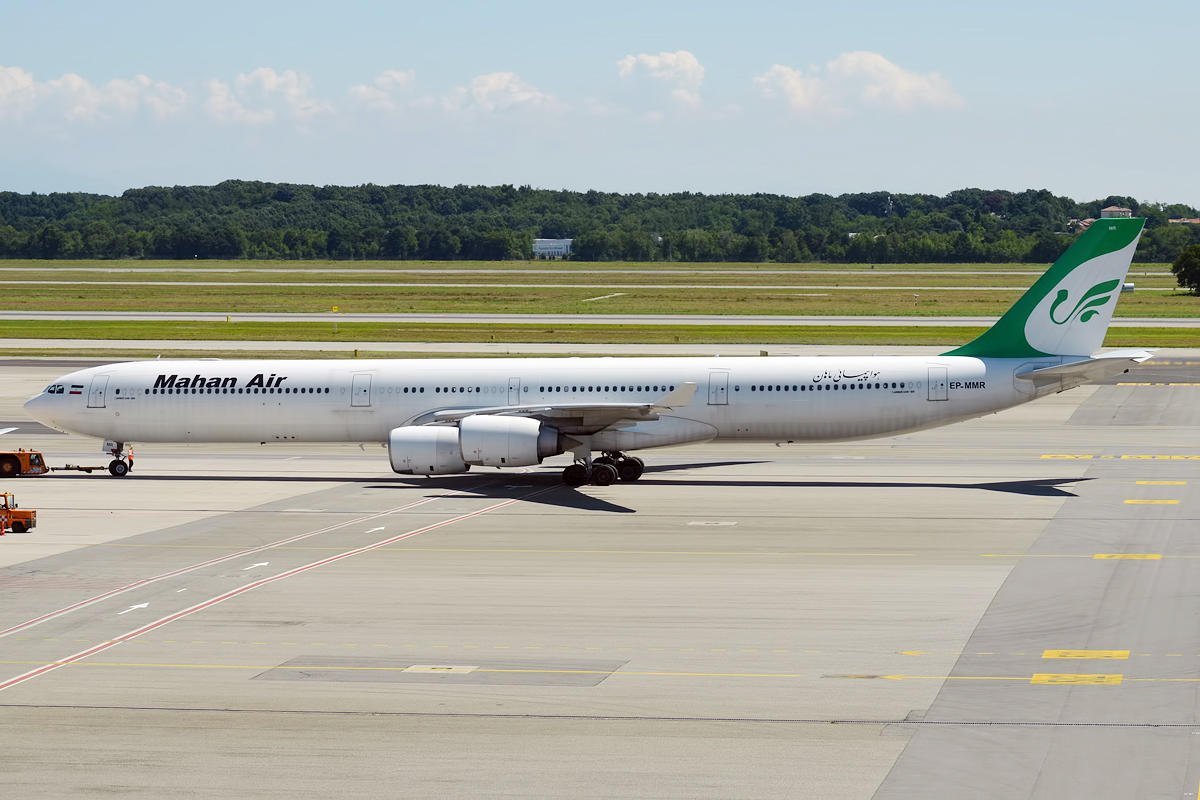 Tehran based Mahan Air is Iran’s largest privately owned airline, and owns the world’s second largest Airbus A340 fleet, with five -300s and seven -600s making a total of twelve airframes currently on their books. Mahan Air’s A340s can be flown on a huge variety of routes as they are the backbone of the airline’s longhaul fleet, primarily on flights to Western Europe, China and South-East Asia, while also appearing on shorter, higher demand routes to the UAE and Turkey at times. Mahan Air’s A340s are all around 20 years of age, and with the rest of the fleet averaging around 30 years old, it seems highly likely Mahan’s A340s will soldier on for at least the rest of the decade.

A more unlikely operator of the Airbus A340 is Iran Aseman Airlines, a smaller Iranian carrier that flies a single A340, serial number 002, the second A340 prototype. Although EP-APA hasn’t flown recently, prior to the Covid-19 pandemic, it almost exclusively flew between Tehran and Istanbul, and, should it renter service, it seems likely that this would again be its primary route. 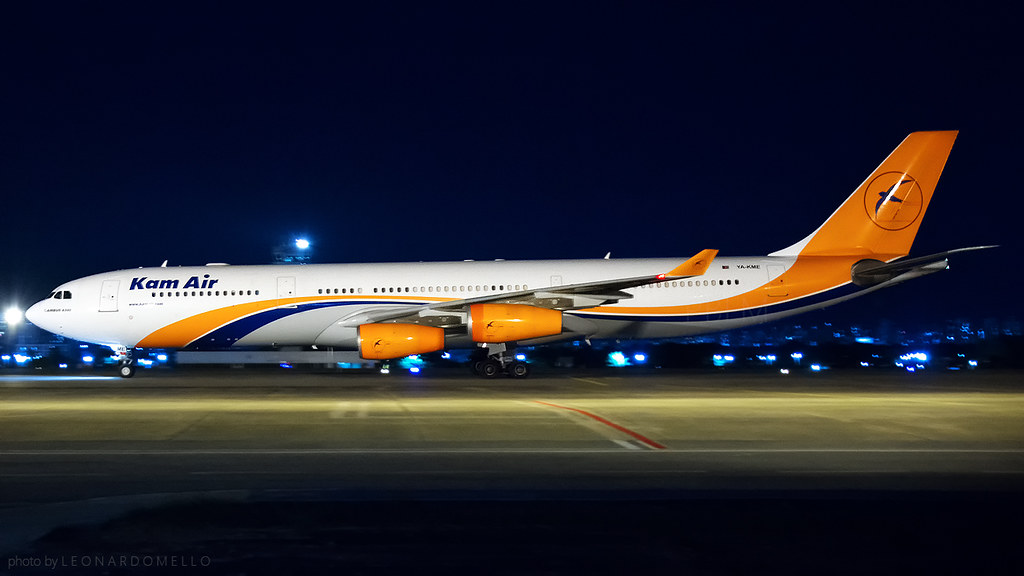 I must preface this by saying, now very much is not the time to be travelling to Afghanistan, and especially not for an aircraft as common as the Airbus A340. Afghanistan’s largest airline’s two Airbus A340-300s were made famous a few months ago, with images of the pair parked on the tarmac at Kabul Airport as desperate Afghans clamoured over the aircraft in a vain attempt to leave the country, today the pair have returned to a more humdrum life, with YA-KMH and YA-KMU appearing on flights from Kabul to the UAE and China. Due to the current situation in Afghanistan, it seems unlikely that the aircraft will be able to be maintained properly in the long term, so it will not come as a surprise if they are eventually grounded. 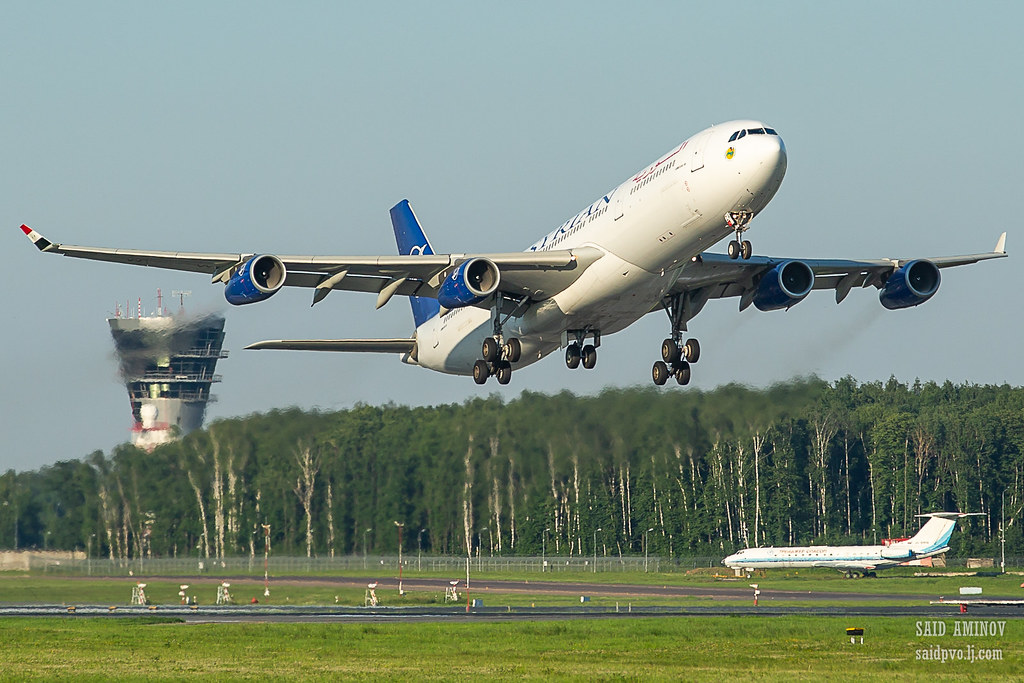 The Syrian flag carrier fields a fleet of two Airbus A340-300s that are surprisingly active, flying almost daily to a huge variety of destinations across the Middle East and Africa, however, whether these flights are bookable or not, I’m not too sure. 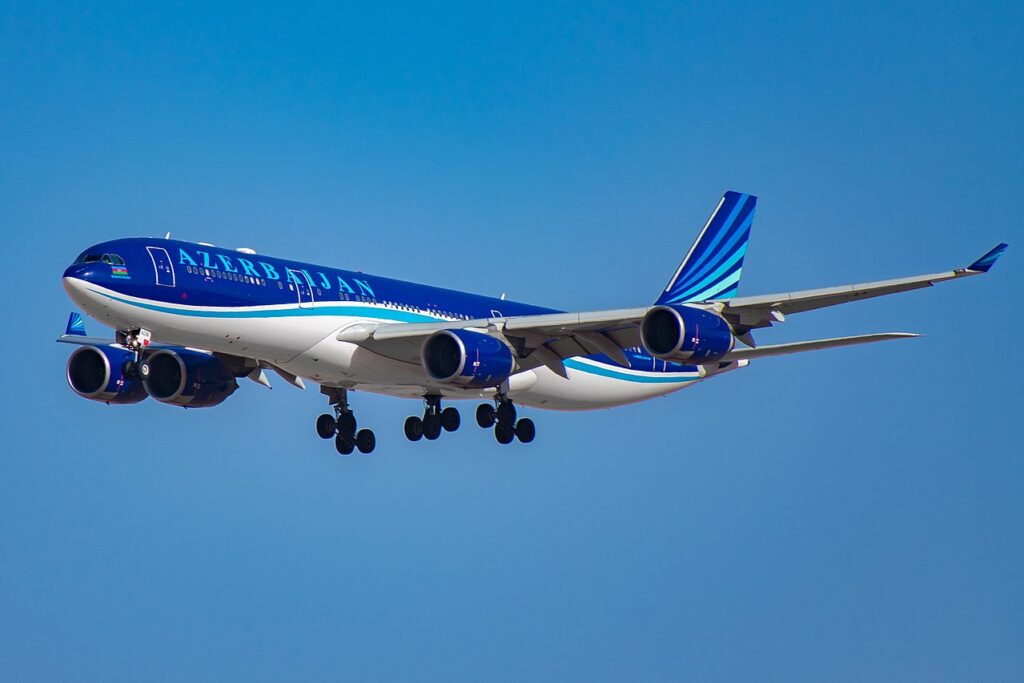 Azerbaijan Airlines operates the world’s last two passenger Airbus A340-500s, with a single -600 flown in a VIP configuration for the Azeri government. Although only one is still flying with some regularity, to Dubai and Istanbul from Baku, it’s impossible to predict when they will finally be retired, as they have multiple times in the past few years when various aviation news outlets have reported on the supposed retirement of the pair.

Beyond South Africa, the Airbus A340 never truly gained much of a foothold on the continent, and bar a few smaller operators that have come and gone, SAA was the only carrier with a sizable fleet, until these too were retired as the airline was restructured due to financial difficulties exacerbated by the pandemic. 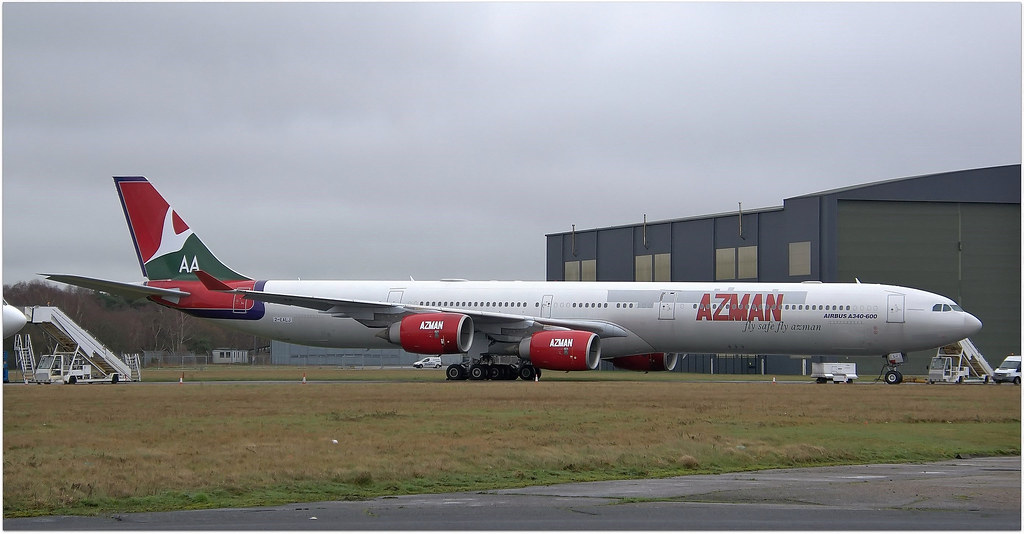 Quite possibly the least likely operator of Africa’s last A340, is Nigerian airline, Azman Air, who, until March 2020 had been a Boeing 737 only airline. Azman’s former Virgin Atlantic A340-600 is also quite possibly the weirdest configured, with a whopping 411 economy seats and just two business class seats up the front. Although 5N-AAM hasn’t flown since December last year, it seems likely it will be reactivated in time for the Hajj in July, however it will be difficult if not impossible to get on one of the flights to Jeddah as access to the holy cities is limited to Muslims only.

The Airbus A340 was initially fairly popular in the Latin American world with airlines such as LAN Chile and Aerolineas Argentinas, however most had been retired by the mid-2010s, leaving a few stragglers with smaller airlines. 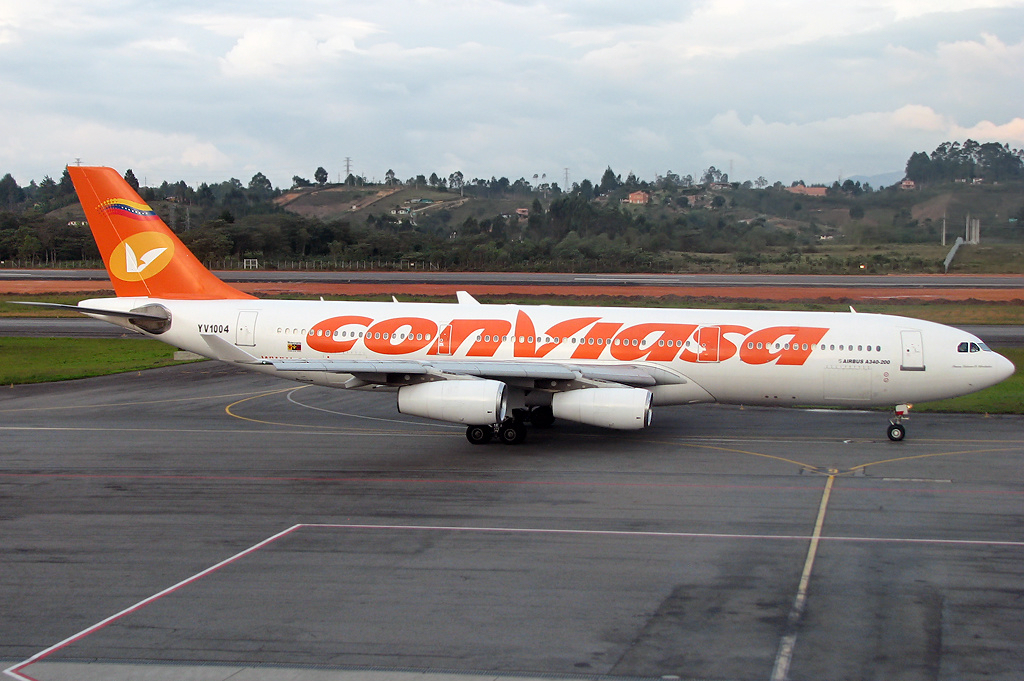 The Venezuelan carrier currently flies two Airbus A340s, a 24-year-old A340-300, YV3507, and the world’s last passenger A340-200, YV1004. The operations of these two elusive A340s, is dodgy and unpredictable to say the least, with some very odd scheduled services flown from Caracas to Moscow, Tehran, Belgrade, and Havana, with safer bets being Cancun or Buenos Aires. Again, as with the Iranian A340s, an early retirement seems very unlikely due to the sanctions imposed against Venezuela, making it incredibly difficult to acquire newer aircraft.

While the A340 has significantly decreased in numbers over the last few years, there are still quite a few viable options if you’d like to catch one last flight on Airbus’ original quadjet. If you have enjoyed reading my first article for Airport Spotting, I’d really appreciate it if you checked out my own website, ymhb.net, where I write about aviation in my home state of Tasmania, Australia and beyond.

You have left off your A340-600 list Bournemouth based Maleth Aero/European Cargo.

[…] Over 30 years have now passed since the first flight of the Airbus A300’s ultimate stretch, the A340, an aircraft that, while not quite as successful as it’s main, twinjet competitor, the Boeing 777, had a significant impact on aircraft design and pioneered some of the world’s longest passenger flights. Today, the Airbus A340 has fallen out of favour with most of its original operators, with the notable exception of Lufthansa, and been replaced by more efficient Airbus A350 and Boeing 787 twinjets. However, the A340 lives on in fairly significant numbers in the Middle East, with a few flying for other operators further abroad. Today we’ll be taking a look at which operators are holding out with the A340! You can read the rest on airportspotting.com. […]

Just wrote it as a review of commercial passenger ops, there are quite a few Preighter A340s out there now

I have very much enjoyed my five A340 flights with VIRGIN ATLANTIC and CATHAY PACIFIC, a truly magnificent aeroplane. Was lucky enough to see the A340 prototype F-WWAI in February 1993 at the Avalon air show, near Melbourne.
They are still regular visitors to my home airport of Perth.