The Ilyushin Il-86 is one of the classic Soviet-era jet airliners that we don’t hear a lot about any more.

Reading Charles Kennedy’s excellent book Jetliners of the Red Star, I was fascinated to discover more about this aircraft, which was Russia’s first widebody airliner.

Built in response to the new breed of widebodies coming out of the West, like the Boeing 747, Douglas DC-10, Lockheed L1011 and Airbus A300, the Il-86 was designed to carry a large number of people on trunk routes.

It had some fascinating features, like boarding stairs built into the lower deck where passengers would deposit their luggage before climbing up to the main passenger cabin, which as a result did not have overhead luggage bins. 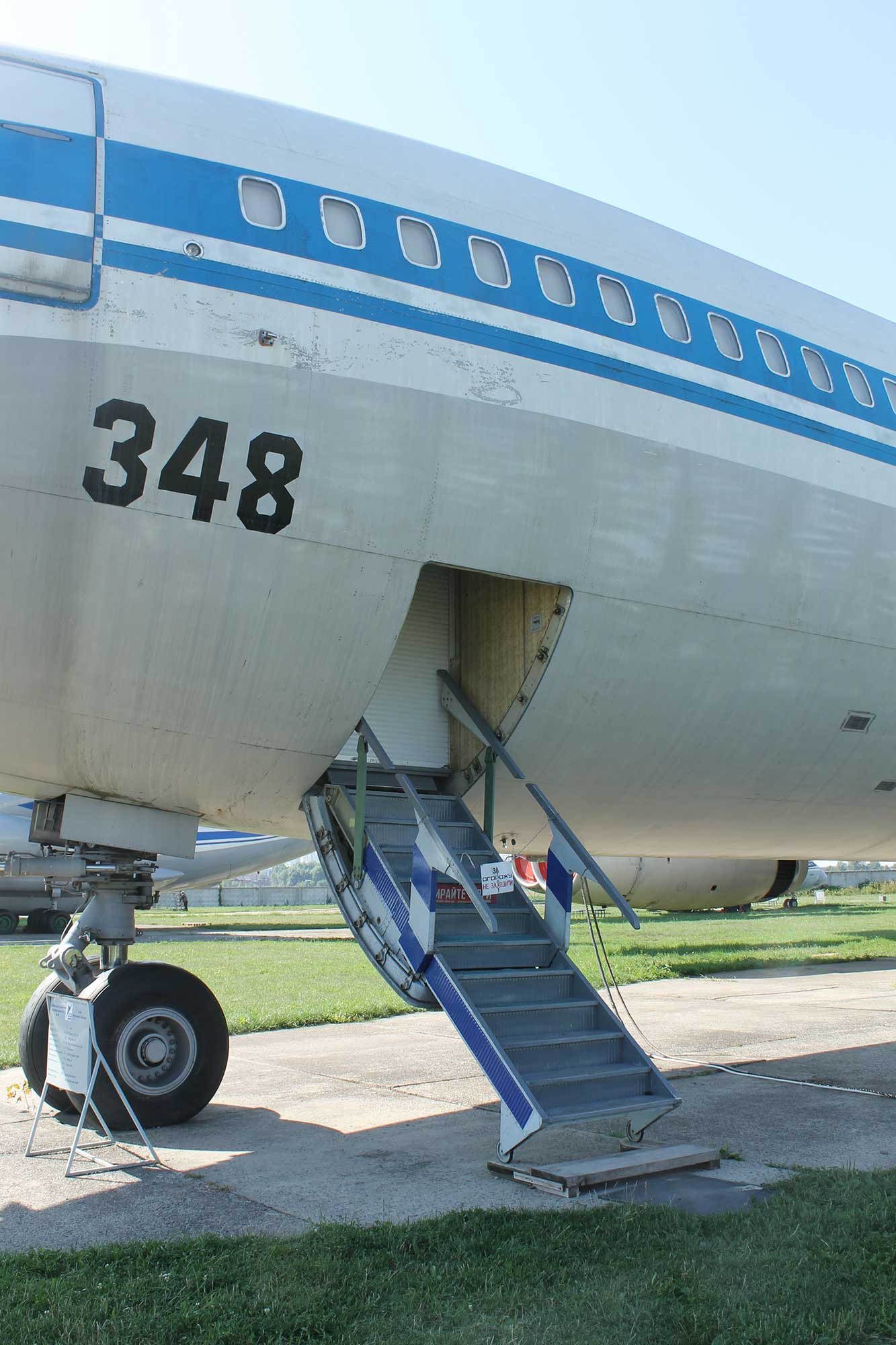 Steps leading to the lower level for passenger boarding.

The IL-86 was notoriously fuel-thirsty and under-powered. It would consume 3 tonnes of fuel per hour, and was only really suitable for short- and medium-haul routes.

Nevertheless, the airlines that flew the type would send it all over Russia, Asia and the Middle East. I remember seeing them flying into Dubai in the early 2000s, and there are some hair-raising videos of them departing runways of European holiday destinations with only metres to spare. See this video as an example: 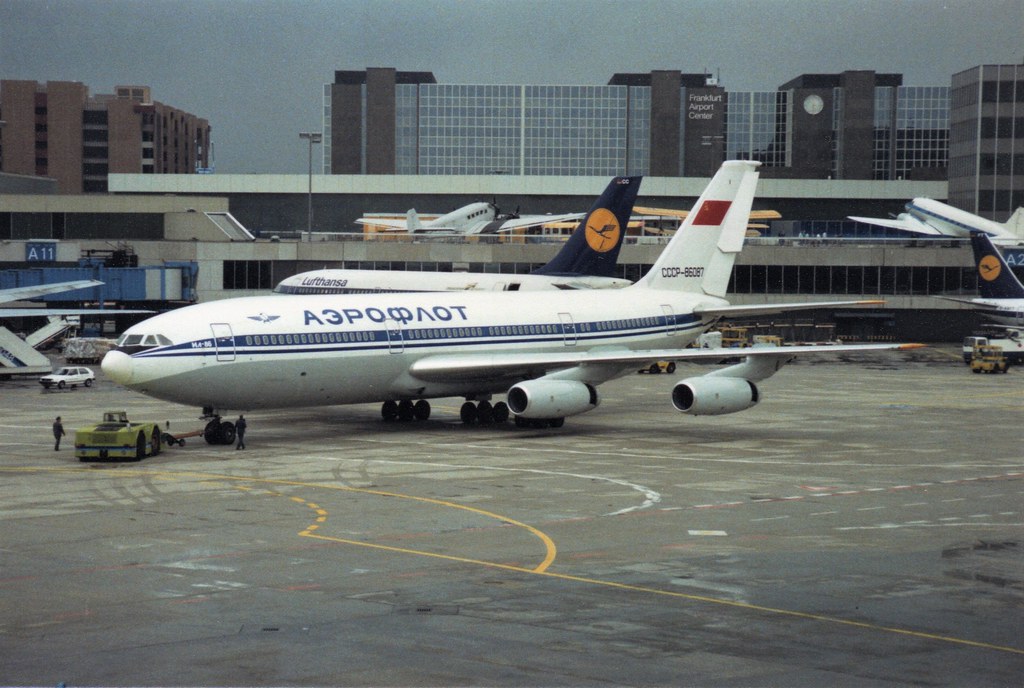 The Ilyushin IL-86 was developed for the Soviet national airline, Aeroflot, and entered service with them on 26 December, 1980, flying from Moscow to Tashkent.

As well as domestic trunk routes, it also flew to Eastern European and Scandinavian destinations in its early days.

On occasion it flew on long-haul routes to Cuba and South America, but required numerous fuel-stops along the way.

Other airlines that flew the IL-86 include: 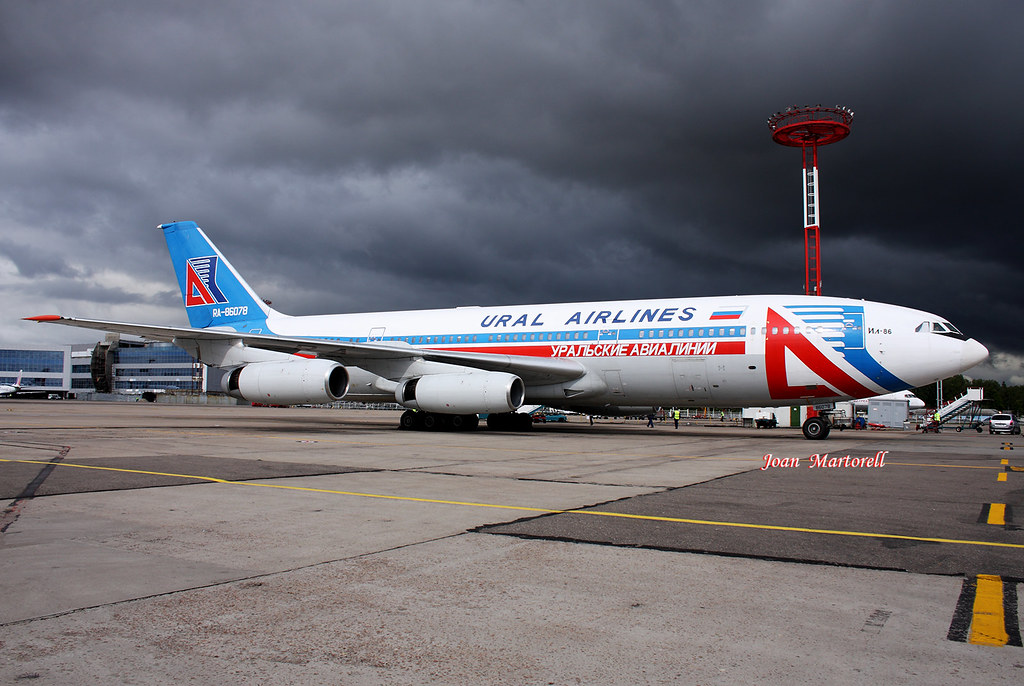 Various cargo carriers also operated freighter versions on the IL-86, and it was also delivered in military and government variants. 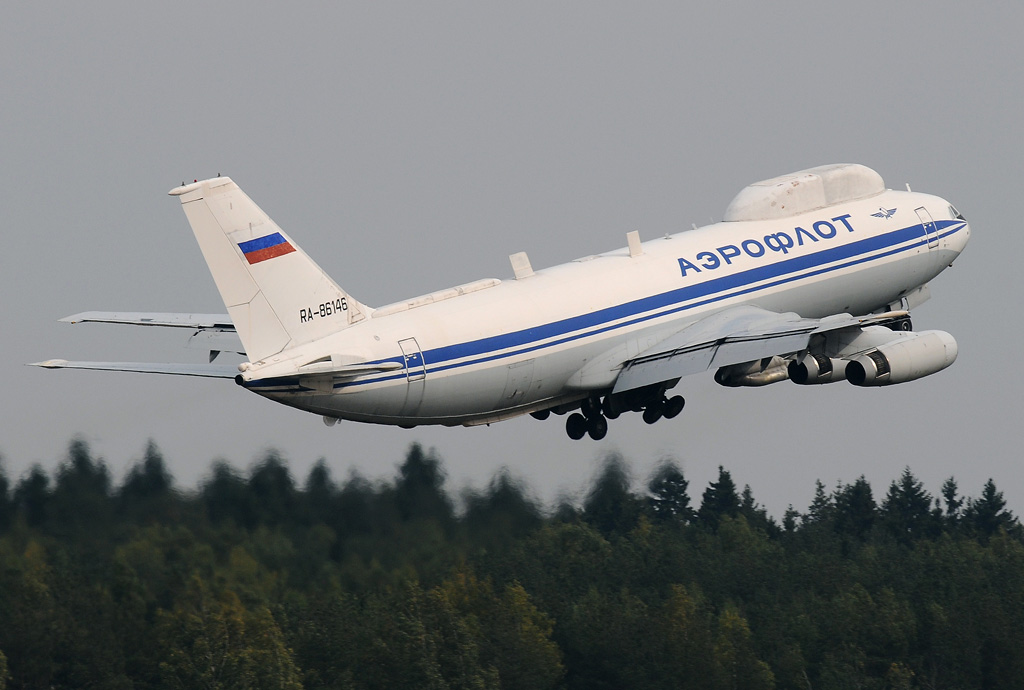 Of the 106 Il-86 aircraft known to have been built, none have been operational in carrying passengers since around 2012 when the last examples carrying holidaymakers to European resorts were retired.

A few military and government examples are still thought to be active, or stored in an active condition in Russia, but are rarely seen anywhere, and so it’s hard for enthusiasts to witness the noisy, smoky old Russian ‘airbus’ in action any more.

Where to see an Il-86 today

Thankfully a few examples of the Il-86 are easy enough to see. The following examples are preserved or otherwise visible: 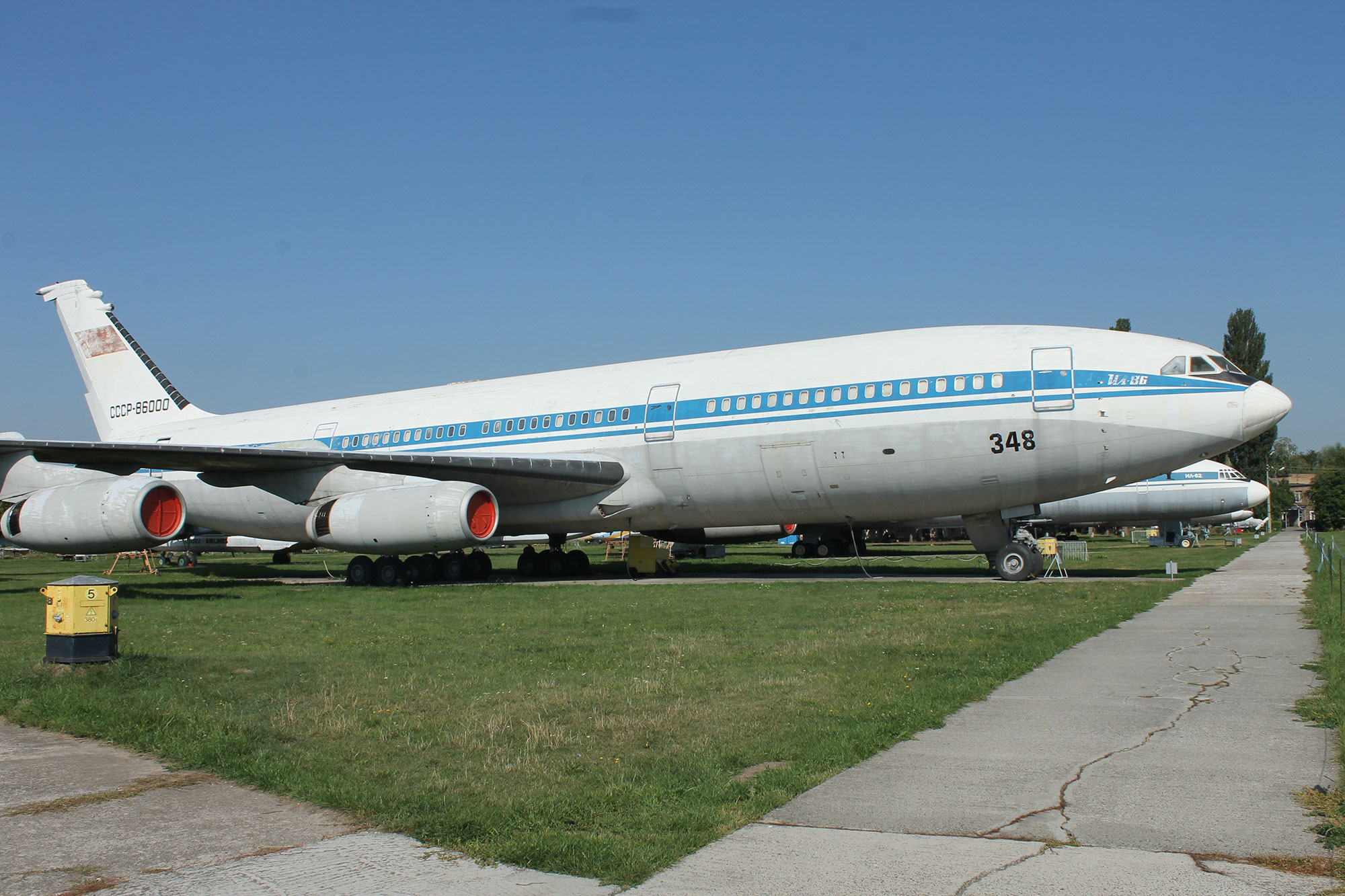 CCCP-86000 (0101)
Preserved at the State Aviation Museum next to Kiev Zhuliany airport. This was one of the prototype aircraft.

RA-86062 (51483203029)
Preserved at the Museum of Civil Aviation in Ulyanovsk. Wears Atlant-Soyuz markings. Previously flew for Aeroflot and Belavia. 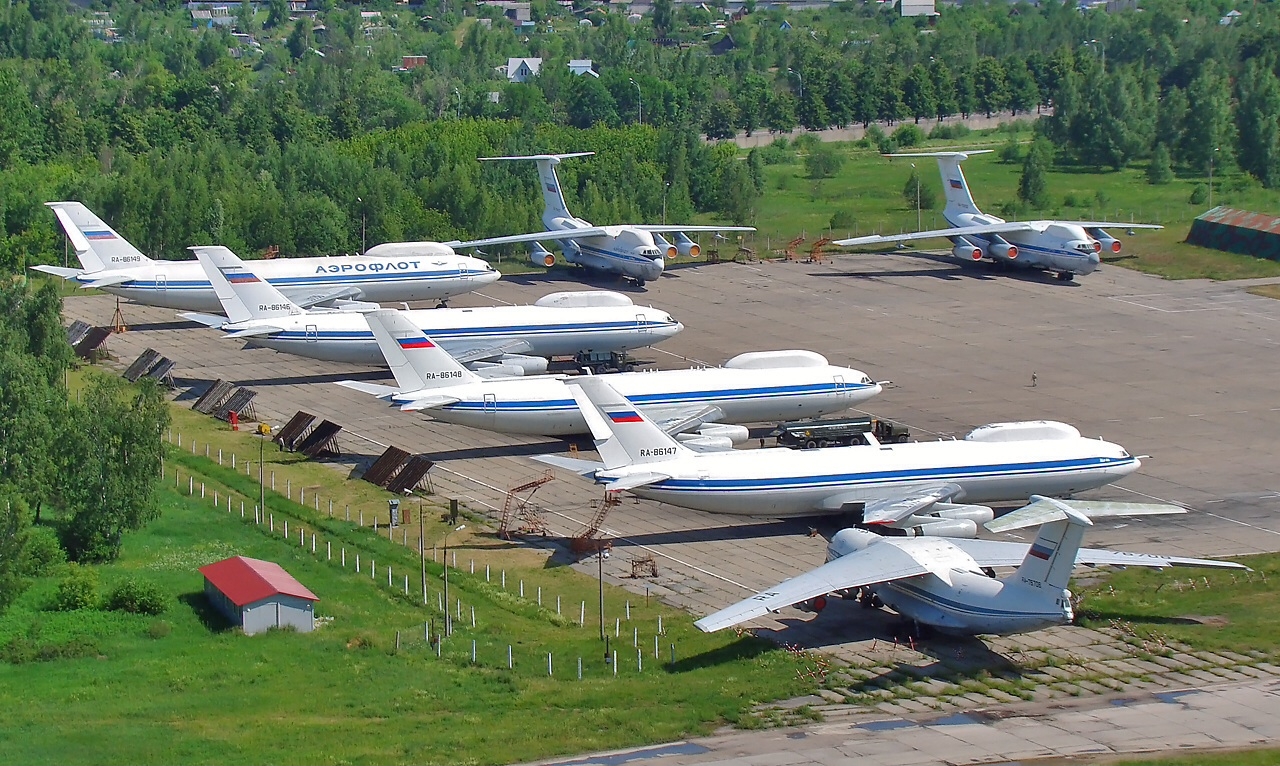 This is the location of Russia’s government fleet of Ilyushin Il-86 aircraft, which may or may not be active. At least four reside here, with one designated an Il-80 variant.

Other Il-86s have been withdrawn from use here in the past, and so may still be present on the airfield.

Sadly this is not an easy place to spot at, and would cause a lot of suspicion if you tried. 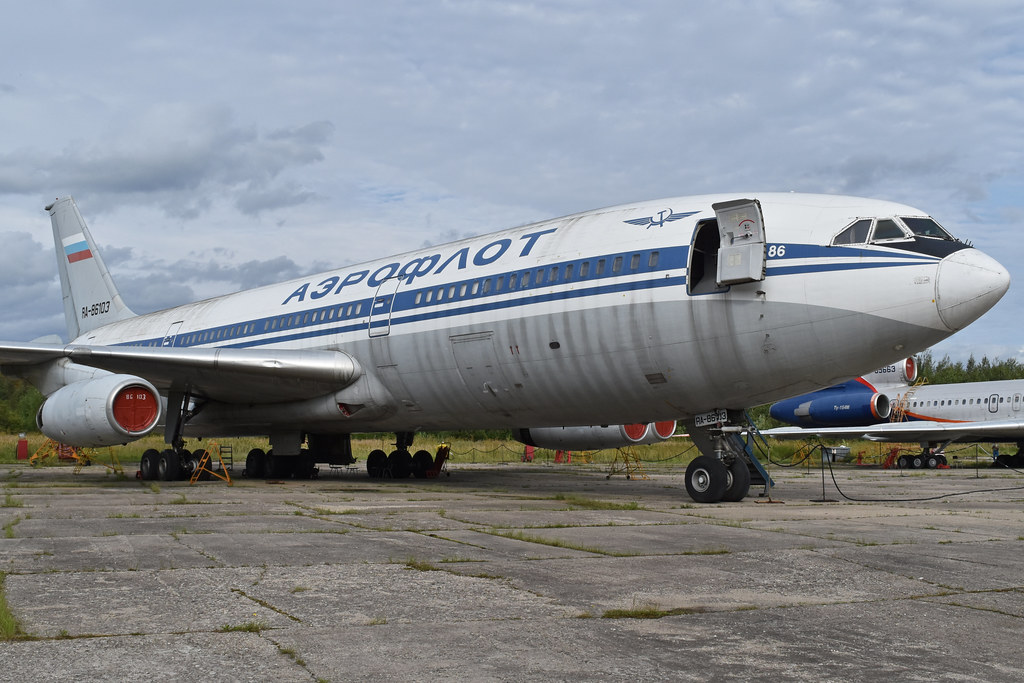 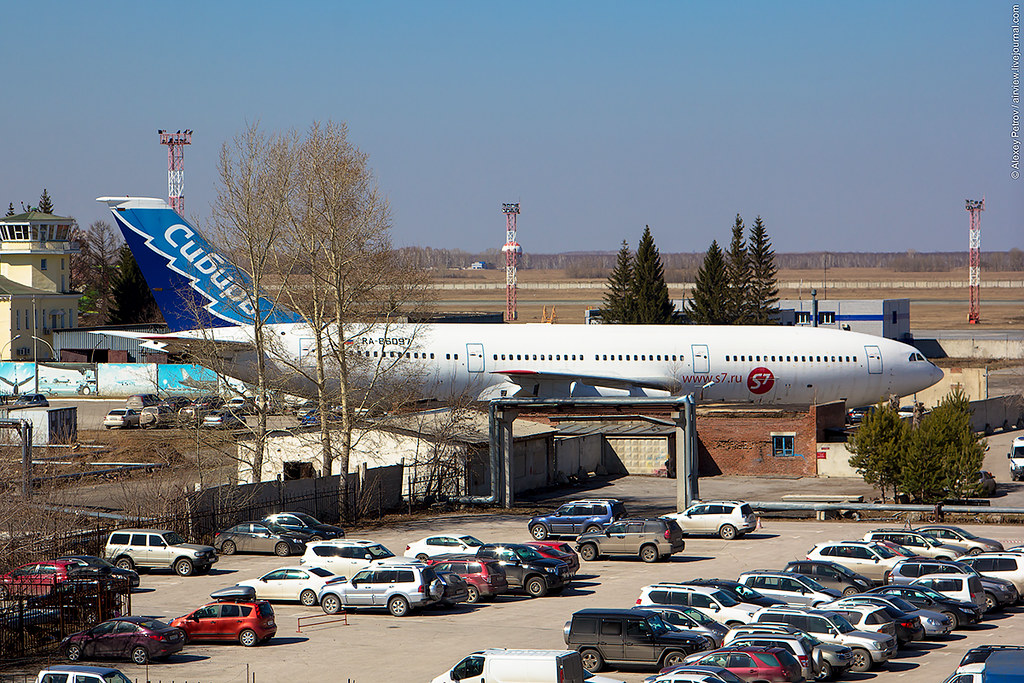 RA-86097 (51483207068)
Preserved at Novosibirsk International Airport, this aircraft was stored at the airport for a number of years. It still wears S7 Airlines markings, and is on display near the car parks and hotel outside the airport terminal.

Fairly certain I would have flown on these in the early to mid 90’s between the UK and Vietnam, some very long transits in Moscow, Karachi Dubai and noversirbisk, great fun at the time

I flew from Simferopol, Russia to Leningrad, Russia on Aeroflot aircraft IL 86 in 1984 June. I climbed the stairway and left my luggage and up again to the cabin. It lacked the overhead stowage bins in the centre row, Ironically, L-1011 matched the IL-86 in size and performance and have development potential. The US government vetoed send of 12 General Electric CF6-50 engines which order by Soviet Union for long range IL-86. The USSR own factory made Kuznetsov NK-86 which is similar to B707 engine. Those engines had worse fuel guzzling. It required IL-86 made several stops for refueling for long route. I laughed very hard and and remind me of frequently flyer of B707 and DC-8 in 1960’s to 1980’s. It was unbelievable to me because IL-86 had old fashioned thin engine which was not match with Jumbo size aircraft. It was good memory of riding the IL-86. IL-86 is unique aircraft with odd configuration.

I have 4 flights on Il-86: from Moscow Domodedovo to Antaliya (Turkey) with S7 in 2005 (in those times it was called Siberia) and from Moscow Sheremetyevo to Sharm El Sheikh (Egypt) in 2007 (don’t remember the airline). This 4 flights was my first flights, and this plane is plane of my childhood. I have a little bit misty, but happy memories of that time. I remember smell of cabin, sound of engines and taste of pasta with creamy cheese for dinner in night flight. Remember queue to the middle retractable airstairs, lower baggage compartment, staircase, walking up to the passenger cabin (don’t know why, but never seen somebody ho left baggage there, maybe this feature was used in earlier times. Really miss her.