Where are the best places for aircraft photography? I’m sure we’ve all seen some amazing airliner photographs on sites like Airliners.net and wished we were in the location with our own cameras.

Well, for some inspiration when planning your next trips, here are the 12 best airport for aircraft photographers. Australia’s busiest airport, set between the city and sea with amazing backdrops of either depending on which way you look.

See large airliners from around Asia as well as the interesting domestic traffic come and go all day long. One of the best locations to spot is from the beach alongside runway 34L where you can keep your toes cool in the water… just remember to keep your camera dry! Asia’s answer to St Maarten’s Maho Beach is at Phuket, Thailand. This is a popular holiday airport which sees many large airliners from across Asia, Europe and the Middle East.

Nai Yang beach is right at the end of runway 09, with a clearing cut in the trees as aircraft pass so low overhead just before landing. The combination of sunshine, blue skies and low flying airliners is perfect for aircraft photography. 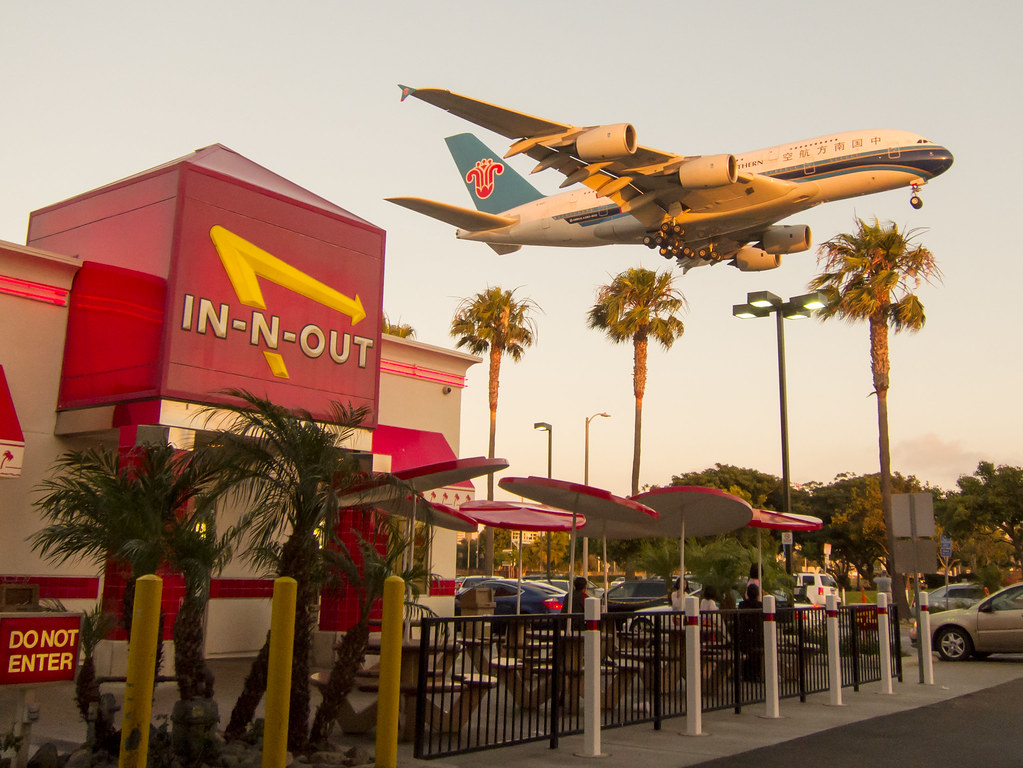 Mostly basking in the California sun, Los Angeles International is blessed with an amazing mix of airliners from around the world, including many that are rarer in other parts of the world.

Imperial Hill is a great place to watch and log aircraft, but for the most impressive photographs head to the In ‘n’ Out Burger at 9149 S Sepulveda Blvd where you can enjoy some great food and a stream of large airliners pass right by.

The sheer size of Schiphol, with its six runways, can be a bit daunting to the spotter. The ease of the Panorama Terrace tends to be the natural draw to spotters since it is located on top of the terminal, and it is possible to get some good photographs here. But the ‘professionals’ will tell you to make the journey to one of the spots alongside runway 18R/36L (known as the Polerbaan) where these amazing shots can be taken. Madrid’s constant sun and good light makes it perfect for your camera lens. The order of the day here is pictures of aircraft on the ground, particularly if you head to the Mound spotting location in the centre of the airfield where much of the traffic passes close by you on its way to or from the runways. The combination of a major airport and the wilds of Alaska can certainly make some dramatic photographs possible. With the mountain ranges rising behind the airport and lots of large cargo airliners and old piston props flying in and out, you should take your camera to Point Woronzoff near the main runway. Expect lots of US domestic flights, leisure airlines from Europe, and wide-bodies from Asia on a daily basis at Las Vegas McCarran (plus those secretive EG&G Boeing 737s heading to Area 51).

Any aircraft photographers who can tear themselves away from the slot machines and card tables will do well to head to the spotting locations at Sunset Rd or Paradise Rd depending on landing direction to get some great shots. Most spotters visiting Beijing Capital (the busiest in China, and one of the busiest in the world) stay at the Langham Place hotel. Just outside is a viewing area where locals congregate, and where spotters can take photographs of aircraft on approach from the south.

Sometimes the smog in Beijing can be prohibitive, but when it is clear you have a constant stream of Chinese and other airliners from around the world landing all day and night. The north of England’s busiest airport is great at providing facilities for aircraft spotting and photography, with elevated mounds at the Runway Visitor Park to give to a view over the fenceline as aircraft taxi by.

However, aircraft photographers tend to prefer and unofficial location on the south side of the airport where an elevated area puts you right alongside aircraft as they use runway 23L. You can even take pictures of aircraft on the other runway with a decent lens.

The best way to see unusual airliners from around the world without travelling too far is to visit the factor where they’re made.

Toulouse in southern France is one of the two principal sites that Airbus (along with ATR) aircraft are built and tested. Therefore spotters love to see the variety on offer on a daily basis.

There’s a hill overlooking the northern part of the airport, which is where many photographs from the airport are taken from. It is accessed off Av. Latécoere on the Airbus side of the airport. One of the main airports in Spain’s Canary Islands, off the coast of Africa. Lanzarote handles mainly holiday traffic, mixed with inter-island commuters and links to the mainland with Iberia, Vueling etc. Ryanair operates a base here.

The single runway hugs the shoreline, with the terminal at the northern end. Most spotters use the beach and road at the end of runway 03 since most aircraft approach from this direction and good photographs can be taken. 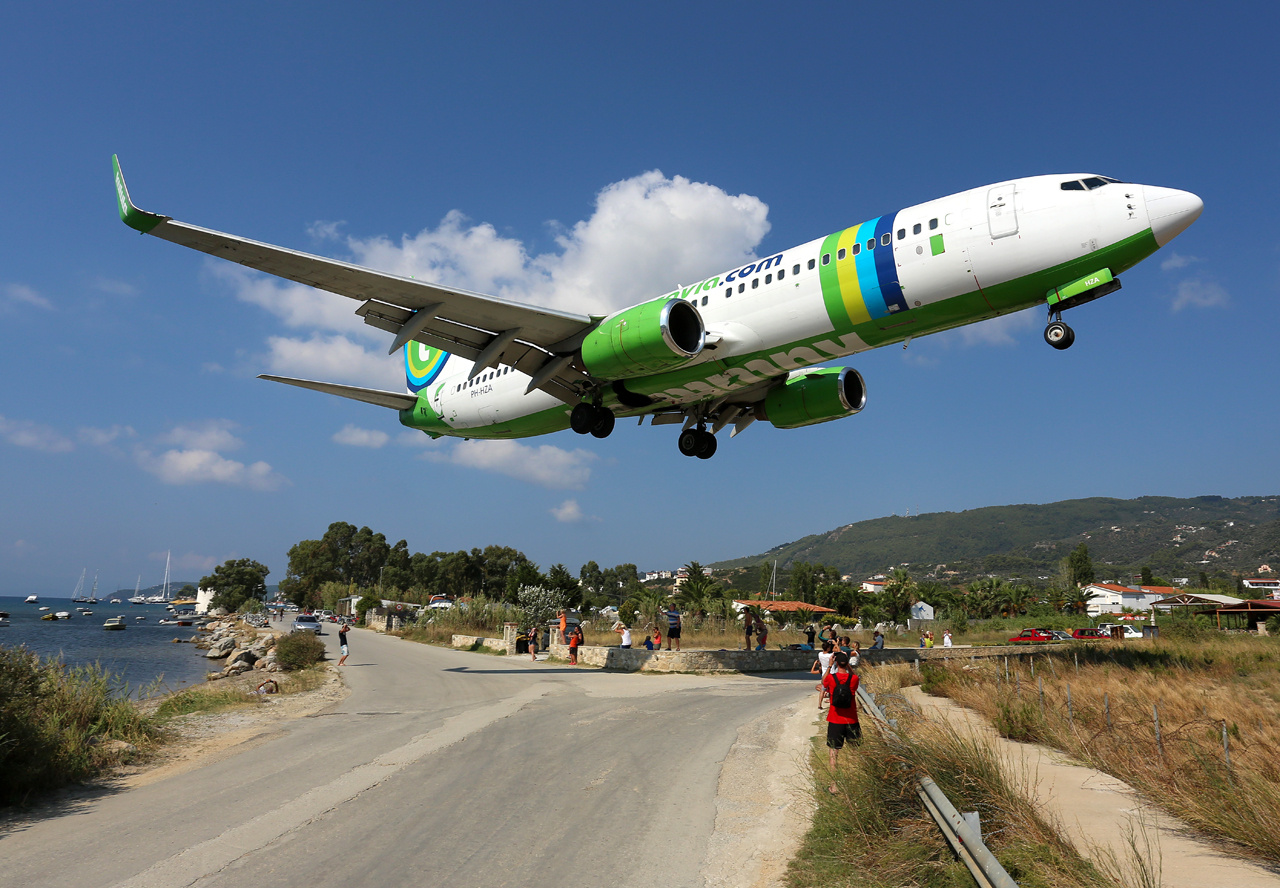 By Timo Breidenstein [GFDL 1.2 or GFDL 1.2], via Wikimedia Commons

A quiet Greek island airport, but spotters love the location, often dubbed the ‘St Maarten of Europe’ with a road passing so close to the threshold that cars must stop and pedestrians duck when aircraft arrive.

If landings are from the south, the road from Skiathos town leads past the end of the runway and you can usually see tourists and spotters congregating.

Get more out of your spotting with this amazing resource book listing where to spot and photograph aircraft at 300+ worldwide airports! 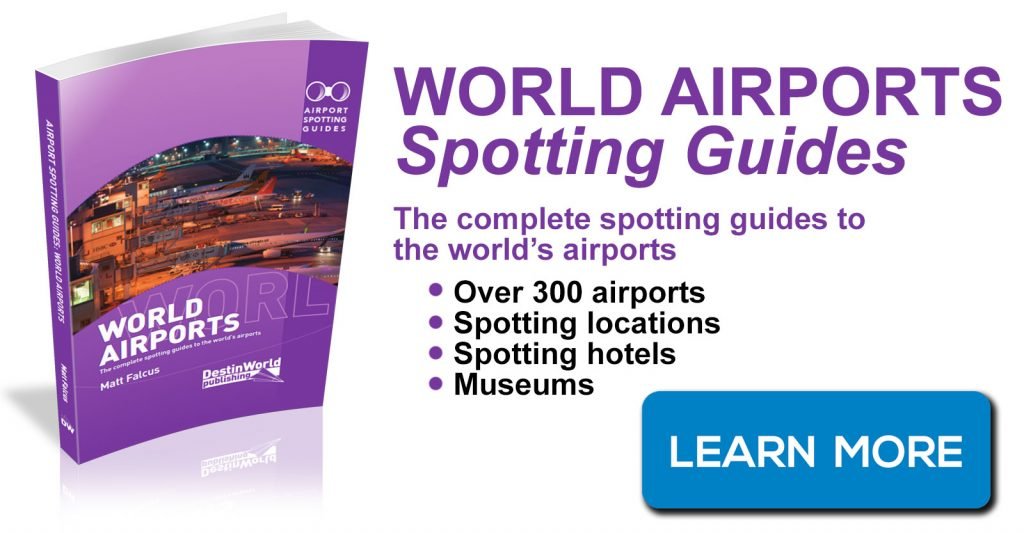 I always read your review carrefully as it is always of good advices. Note that in Toulouse, the hill is located on the northern side of the runways, not so easy to access by foot but when rwy 14 in use, it is worth the trip ! Thanks for this valuable report ! Tokyo Haneda with its terrasse is also a must !!

You mentioned Manchester and I was there to try and go to that park. I couldn’t go there because as the Operator on the tram told me that you needed to have a car. He did give me good directions, one stop out of the airport where the planes would fly right over head. Dave

Hi Dave, yes it’s difficult to get to without a car sadly.

Zurich and Geneva are musts as well. In Zurich you have the classic terrace plus the terrace on terminal E during summer week-ends. In Geneva at both runway ends you can get nice pictures with stunning background. BTW there are rumours that by 2020 a new official viewing facility will again grace l’aéroport de Genève. Happy spotting.

Two more are Corfu and Malta.

At the former, the best spot is at Kanoni.

Go down to the causeway and just wait for them to roar over. Alternatively from the car park for taxiing shots.

At Malta, their is a gantry set up at Kirkop. Just shoot over the fence.

Alternatively, on the north side (to Birzebruggia) holes have been cut in the fence, (so much easier than taking pictures through the mesh).

There are a few great locations missing: Dusseldorf (DUS) and Zurich (ZRH) have the best observation decks in Europe and and both Tokyo (NRT and HND) and Osaka (KSX and ITM) – like nearly all(!) Japanese airports – offer fantastic observation decks!