Plane spotting (aka Planespotting), is not just a hobby but rather a passion, especially for those who are into aviation one way or the other. It is a significant or common hobby in many of the populated cities of the world. Thus, a lot of the major airports have set aside areas designated for spotters which give fantastic views of aircraft and good angles for photography.

As spotters might have to wait for hours for to catch a specific livery or registration, sometimes necessary arrangements are made by the airport to facilitate the spotters. We call these airports as “spotter friendly”. I must recommend Zurich airport for being highly spotter friendly due to special designated areas and tours for spotters.

However, in the Middle East and South Asian region plane spotting is considered illegal. Yes, you might be surprised if you’re living in the U.K, the States or Far East where it’s completely legal and a recognized hobby.

In this article, I would like to shed light on how plane spotting can be done in Pakistan without getting yourself in trouble. The country has around 150 airfields, however, there are three major airports. Namely, Karachi (KHI/OPKC), Islamabad (ISB/OPIS) and Lahore (LHE/OPLA). In this article, we cover the busiest international airport of Pakistan that is the Jinnah International Airport (aka. J.I.A.P.) in Karachi. 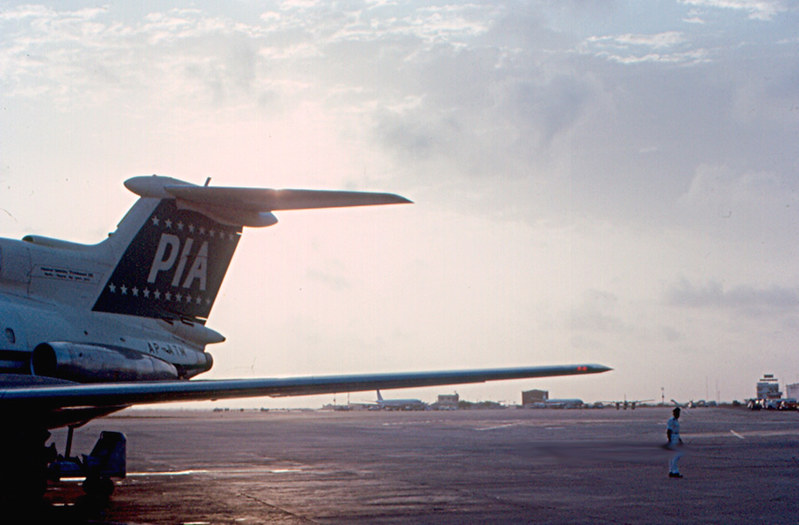 Karachi’s Jinnah International Airport was constructed way back in 1926. The airport was also referred as the gateway to India, as Pakistan got its independence in 1947.

A gigantic airship hangar was constructed at Karachi to dock the British airship “R101” and “R102”. The hangar’s size was so enormous that it became popular among the locals as “Kala Chapra”, meaning “black hovel” in English. Due to its size, it became a point of visual reference for the aircraft flying under VFR.

A new runway was inaugurated in 1961 to accommodate jets. 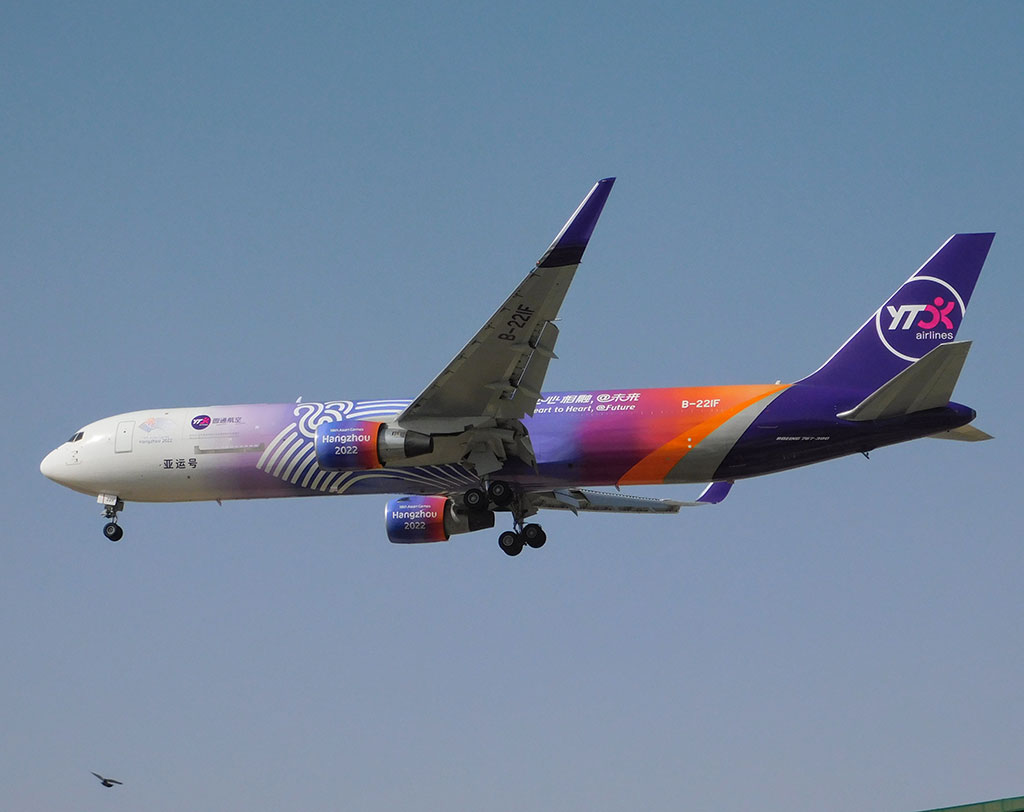 Well, the answer is that officially you’re not allowed to photograph the aircraft as per the law. However, due to the rising trend of plane spotting the officials are well aware of it. They might not question you unless you are carrying any special gears like tripods, heavy lenses etc. The use of a ladder is strictly not recommended.

Here are a few precautions to consider while plane spotting at Karachi.

Locations for spotting in Karachi

The airport has two runways. 25L/07R is the main/primary runway, whereas 25R/07L is the secondary runway (also used for general aviation). Karachi had the privilege to welcome the Antonov 225 for the second and unfortunately the last time, in 2021. 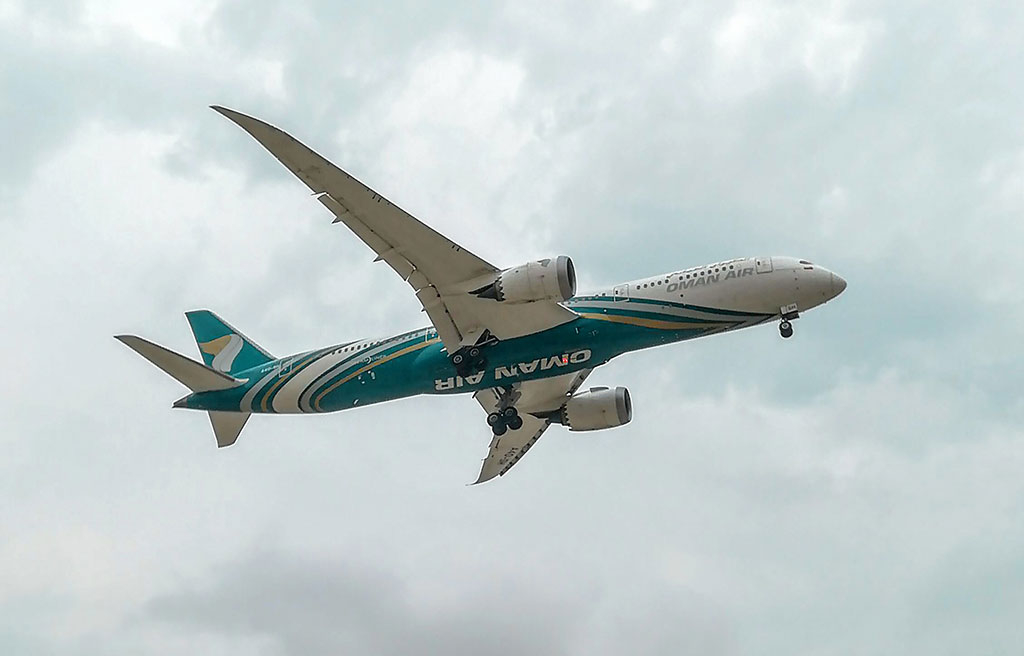 If you head for the eastern (runway 25) side of the airport, the most preferable spot is the “Tank Monument” on the airport road. This spot is pretty popular, therefore you will not face any difficulties commuting to this spot once you reach the airport road.

As this monument is located near the traffic intersection, it might be bothersome if you go during peak hours. You do not require a longer focal length lens, and you could even get some epic shots with a smartphone! 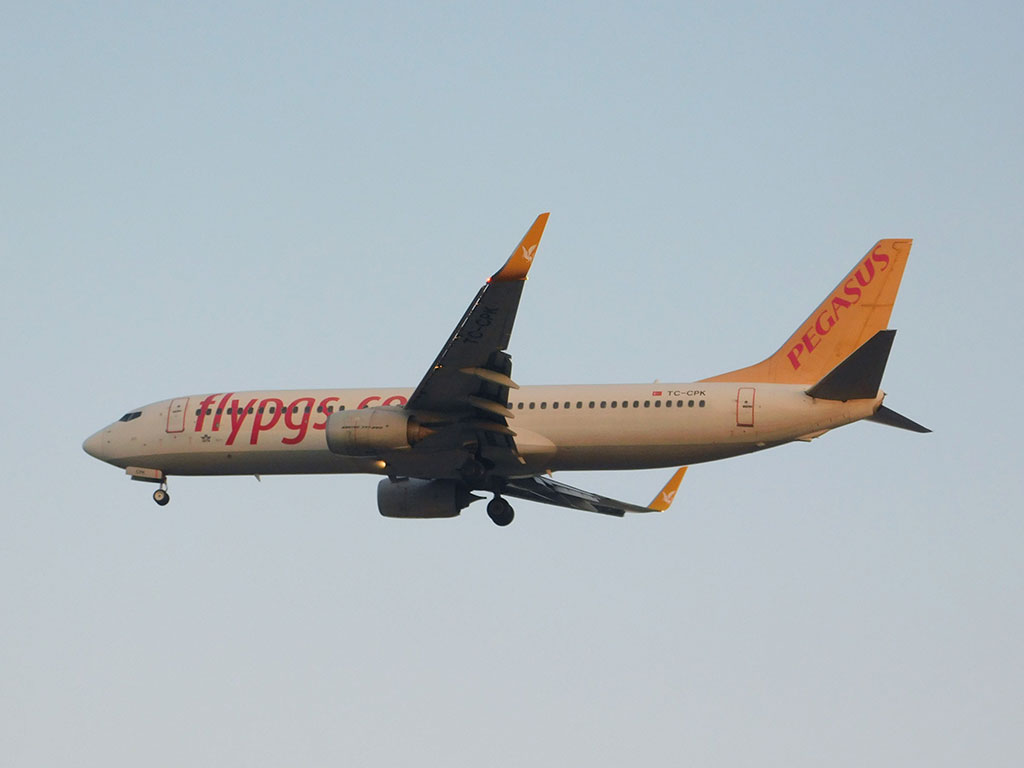 Another spot on the same road that offers really good shots is the “California Pizza”. It’s located just a few meters away from the Tank Monument. From the balcony of this pizzeria, you can easily capture the sideview of the aircraft taking off or landing on runway 25L/R.

Since it’s a restaurant, the terrace only opens up on the evening.

Located inside the terminal, this spot is the best among all others. However, it was closed for general public a few years back. You can still access it if you obtain permission from the Civil Aviation Authority (C.A.A).

It provides a view of the parking gates for international and domestic flights. Moreover, you can catch the runway action, too. However, for this you would require a lens of at least 300mm to get some decent shots. 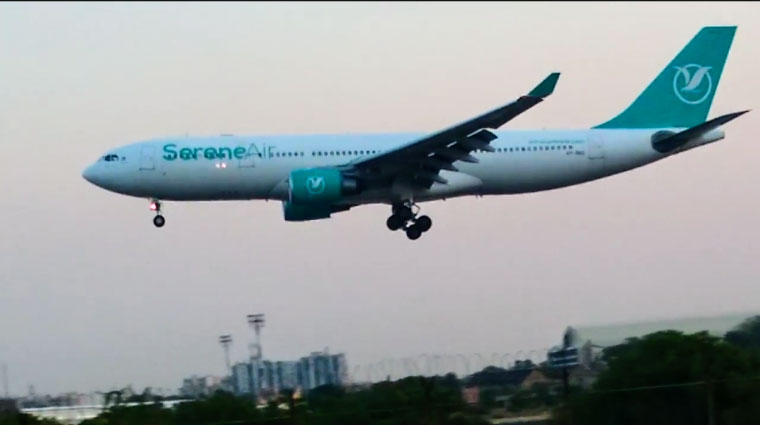 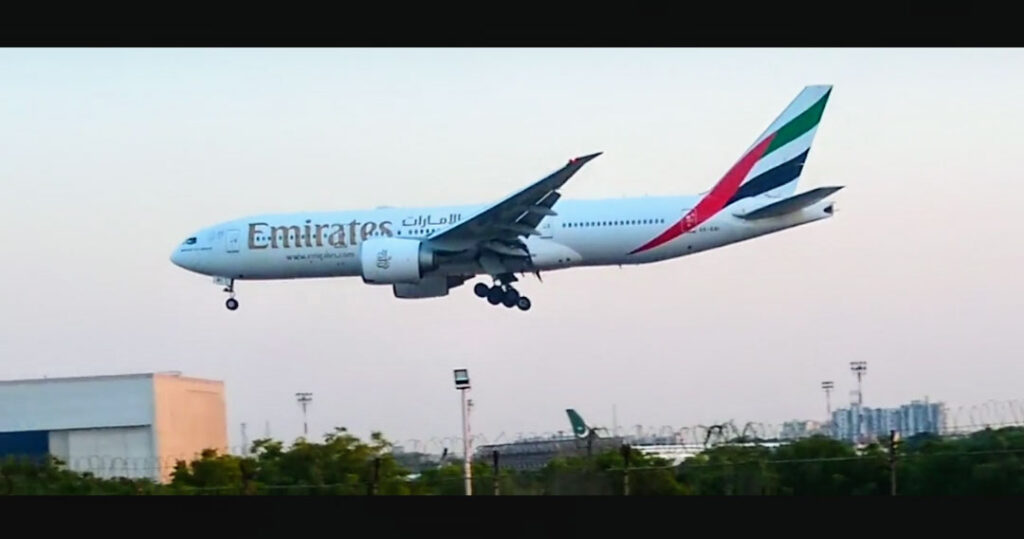 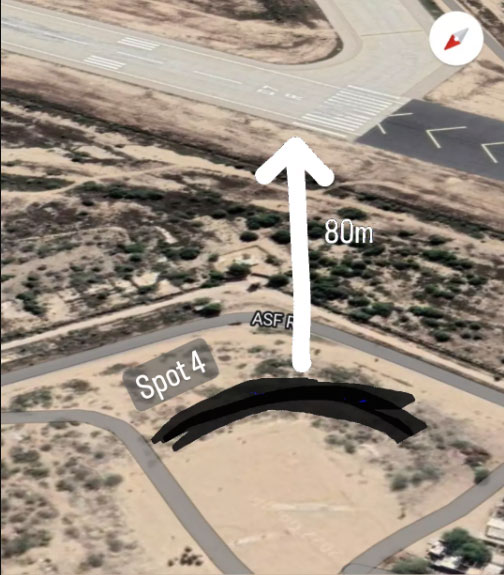 The location of Spot 4

If you opt to do spotting on the runway 07L/R side of the airport, then no doubt the best spot is the cricket field situated just beside the runway thresholds. This place will give you the advantage over others, such as: 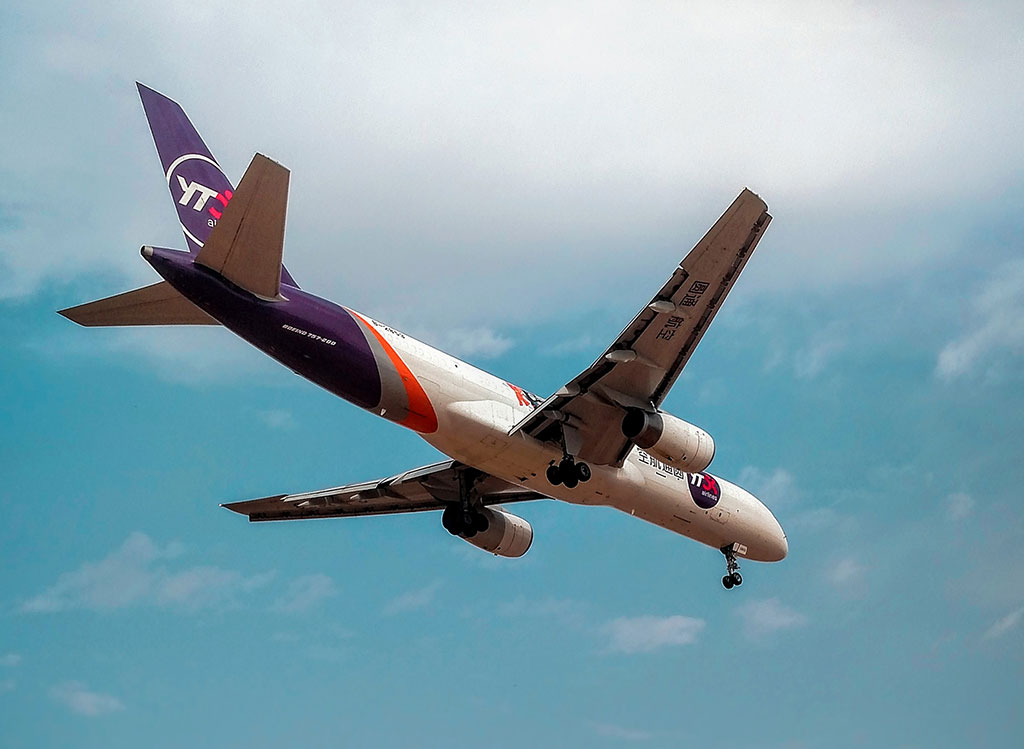 This spot is situated on the link road that passes just beside the fence on the western side of the airport, and perpendicular to the runway. You won’t be able to get complete side view of the aircraft but still, you could get some really cool belly shots!

Since the road is usually busy and located just beside the airport fence, it means that it’s strictly supervised by security. Thus, it’s highly recommended to use only your mobile/smartphone camera.

The aircraft inbound to runway 07R will pass just around 80-100ft above you! 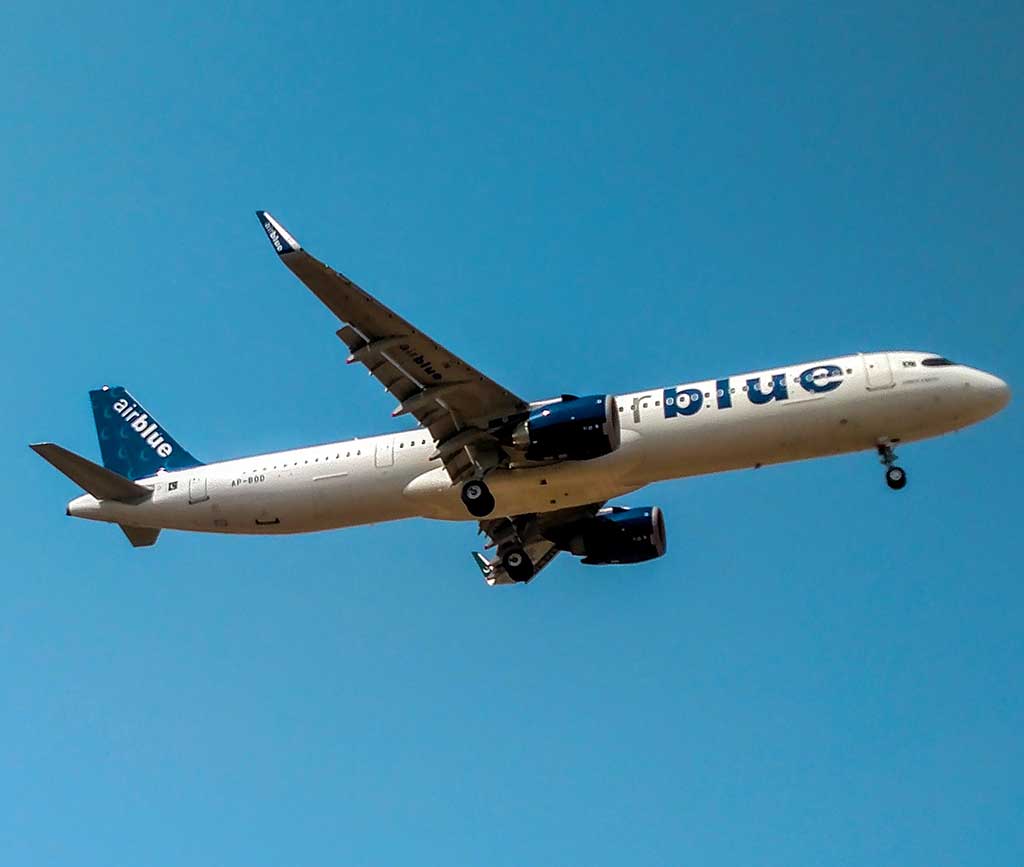 The airport is operational 24/7 but most international flights are scheduled during midnight to early morning hours. However, if you need to catch more in a brief time then you should visit between 10am-1pm local time. In these few hours you would be able to spot plenty of domestic arrivals and departures that are mostly operated by the A320 family aircraft.

A few international flights are also operated during this time period which include airlines such as;

I would again like to draw your attention towards taking the precautions mentioned in this article. You must follow these to avoid getting into any serious trouble.

Some people opt to photograph aircraft movements while standing on the upper/departures area. This is strictly not tolerated as you may end up blocking the path of vehicles that are coming to drop-off the passengers.

Furthermore, if you need any sort of refreshments then you must bring in a clear plastic bag. Many restaurants are also available close to the above-mentioned spotting locations in case you need to dine-in!

A special thanks for helping me with photographs.