A bold statement by Emirates has just been unveiled to celebrate the airline’s sponsorship of Dubai Expo 2020 this year by painting one of its Airbus A380s in a special scheme.

A6-EEU wears this bright blue livery featuring large-scale graphics in vivid green, orange, pink, purple and red, which run across the fuselage and all the way up to the tail and fin interlaced with the distinct ring-shaped Expo 2020 Dubai logo. Special ‘Dubai Expo’ and ‘Be Part of the Magic’ messages run across both sides of the A380 fuselage. The engine cowls also carry the Expo 2020 Dubai messages and dates of the event.

This is far removed from the usual mostly white livery Emirates.

The iconic Emirates red belly branding, which can be only seen when the aircraft is flying overhead, has been replaced by the opportunity themed orange ‘Dubai Expo’ branding, further increasing the event’s visibility and awareness as it flies to the airline’s A380 network over the course of the next 6 months. 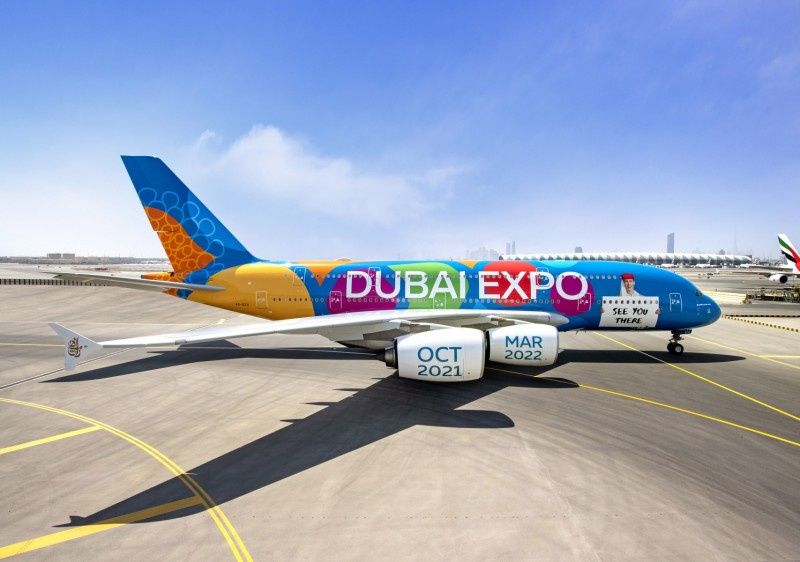 The new A380 livery was designed, painted, produced and installed in-house by the teams at Emirates. The livery was not just a decal, but a complete paint project, and is by far the largest one the airline has ever embarked on. A great deal of planning and ingenuity was involved to ensure the distinct livery design was brought to life and flawlessly executed.

The process of painting the livery design and applying the decals took 16 days and 4,379 man-hours to complete.

What’s more, this new Expo 2020 Dubai livery will appear on three Emirates A380 aircraft to help visually tell the story and reaffirm the themes of one of the largest global events to take place since the onset of the pandemic. The distinctive blue Expo aircraft will join the 40 other special liveries dedicated to Expo 2020 Dubai, which have collectively flown to over 130 destinations across the Emirates network since 2018.

The new livery will wow travellers and drive the Expo 2020 Dubai message when it heads to Los Angeles on 29 September.

What do you think of the livery? Leave a comment below.

Hi Alfred, yes the Dubai Expo 2020 was postponed because of Covid, so it is happening this year.

Hi Matt, a very nice paint job, do you know if the other ones will be the same colours ???.

I’m not sure Dean, but presumably similar. I’ll keep an eye out and try to share a picture.