Aircraft are a lot more disposable today than they used to be. Where older generation airliners were expected to fly for 30 or 40 years, the current generation has a much more limited lifespan rarely reaching 20 or 25 years.

As newer types emerge, older aircraft are often retired as they are superseded, or reach the end of their leases. Then, they’ll often find their way to a storage site or aircraft graveyard where valuable parts are removed and the aircraft usually cut up and recycled.

Sometimes aircraft fly out of these sites for a new life, but it is very rare.

These aircraft graveyards are a fascinating place for aviation enthusiasts and spotters to visit, with row upon row of aircraft parked up, often displaying liveries of defunct airlines.

So which are the best aircraft graveyards around the world? 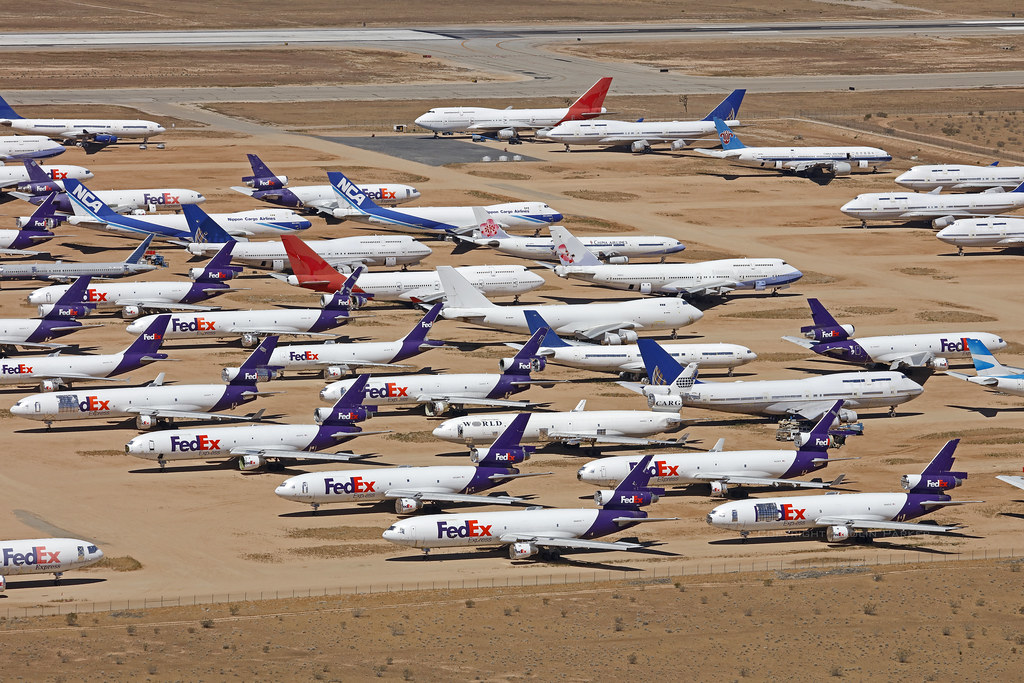 Southern California Logistics Airport at Victorville is located around 50 miles north of San Bernardino, and a couple of hours’ drive from Los Angeles.

It is one of the best known aircraft graveyards, and has seen fleets of older types pass through, including Boeing 727s, Lockheed TriStars and in recent times Boeing 747-400s. It has also been used as a storage site for Boeing 737 MAX aircraft that were grounded. 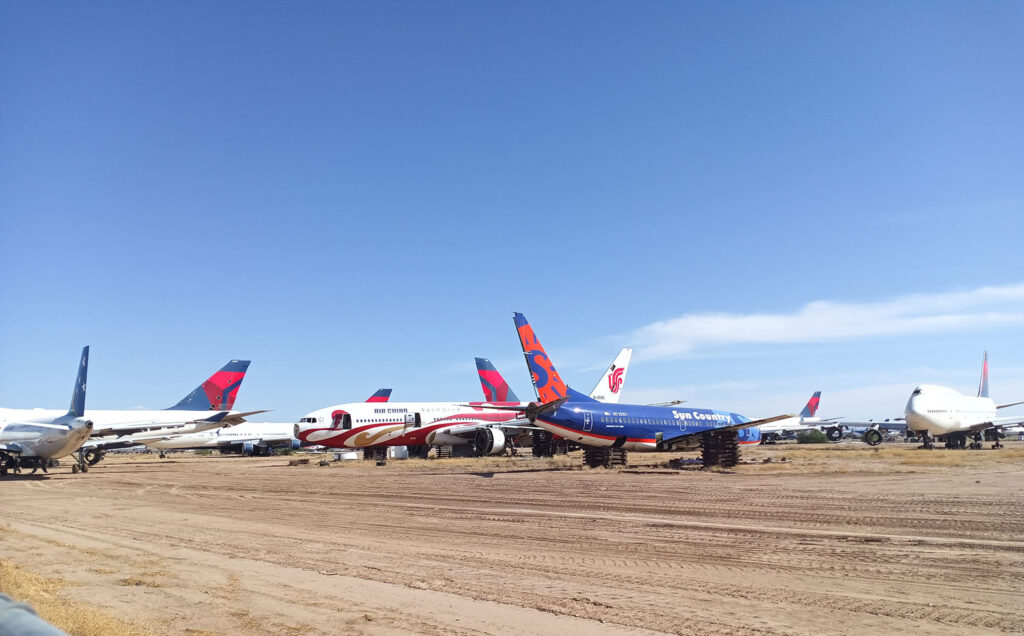 Arizona has plenty of airports used for aircraft storage thanks to its dry climate. The best-known for airliner storage is at Marana Pinal Airpark, around 25 miles north of Tucson. This former military base now uses its runways to park up lines of old airliners destined for scrap (and sometimes new owners) from all over the world.

At times enthusiasts have been welcomed here to take guided tours. Other times it’s not possible. 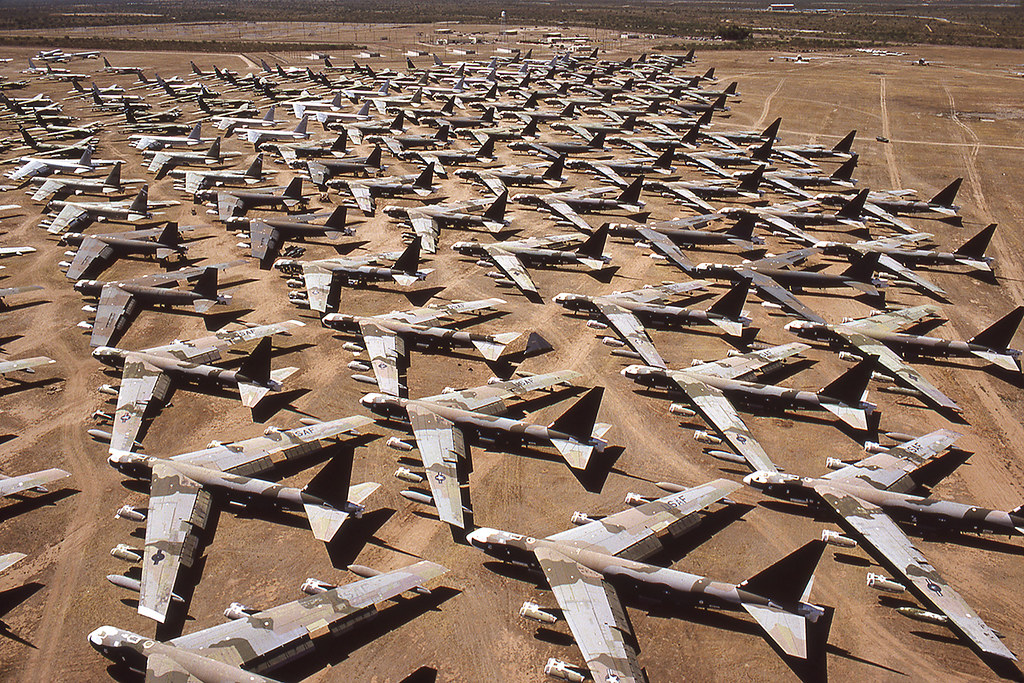 The world’s largest aircraft boneyard and storage site is also in Arizona. Davis-Monthan Air Force Base is located at Tucson and its home to thousands of retired military jets, helicopters and transport types, all lined up in neat rows across the 2,000+ acre site.

The site is operated by the 309th Aerospace Maintenance and Regeneration Group (309th AMARG).

Many of these aircraft have been here for years, and scrapping takes place very slowly as often the aircraft are kept in a position whereby they could be reactivated if needed.

“Celebrity Row” at AMARG is a collection of aircraft which have some kind of fame or importance, are will be kept preserved for the foreseeable future. They include fast jets, as well as airliner types including a Boeing 727 and DC-9.

For many years Mojave in California was THE place to go for seeing retired airliners. I remember visiting in 1992 and seeing lots of Boeing 707s, 727s, Convair 880s, Douglas DC-9s and Lockheed L-1011s lined up.

Sometimes this was the place where new airliners were sent prior to being delivered.

Today Mojave is still a place where lots of old airliners are stored and scrapped, but its focus has recently shifted more to the space industry, with Virgin Galactic/The Spaceship Company basing their operations here. Harry S Truman Regional Airport at Bates City, near Kansas City, is a tiny, remote place that is easy to miss. Yet within its perimeter are hundreds of old aircraft being dismantled and parted out. These range from light aircraft up to regional turboprops and business jets.

This is a private enterprise and access is strictly limited, so sadly enthusiasts can’t just wander around to see the aircraft. But it deserves a mention as a unique and unusual aircraft graveyard. 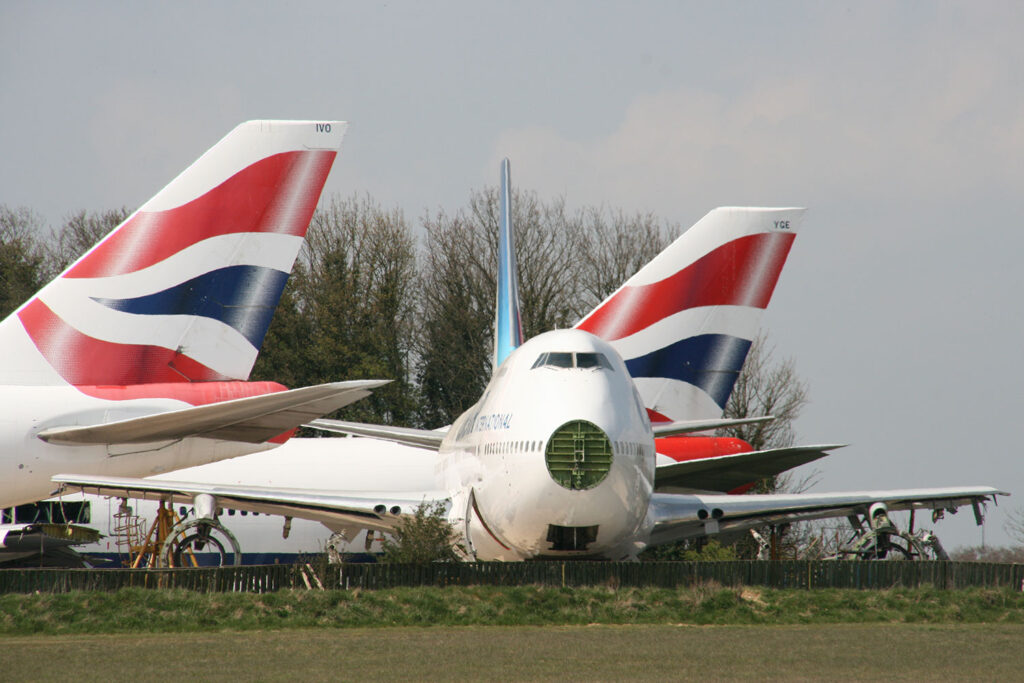 Probably Britain’s best known storage site is Kemble, near Cirencester in southwest England. It is a small airfield used mostly be general aviation, but scattered all around its edges and taxiways are old airliners awaiting parts removal and scrapping. They come here from all over the world, making quite a sight when landing on the short runway, and many of the British Airways 747-400s arrived during 2020.

There is a café and small viewing area at the heart of the airfield, making it friendly to enthusiasts. 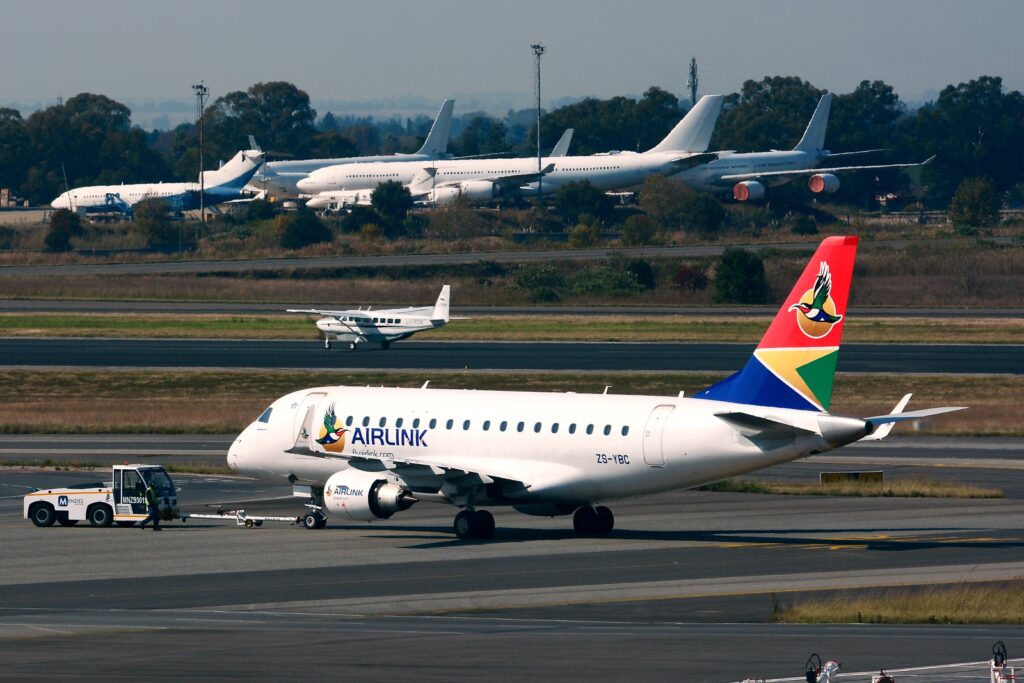 There was a time when O R Tambo International Airport at Johannesburg, was an amazing place to go and see lots of Africa’s retired airlines – which often comprised earlier generation jets and regional types like the BAC 1-11.

Sadly many of these interesting aircraft have been scrapped and what remains in storage at the airport is often difficult to see. But there are plenty of aircraft there, and a glimpse of Google Earth confirms that around the various remote hangars and parking aprons around the site are lots airliners of various types in different conditions.

A relative newcomer, Teruel in eastern Spain was opened in 2013 specifically to act as a storage and scrapping site for airliners, taking advantage of the dry, sunny climate.

Since then the site has swelled with large airliners from around the world. In recent times there have been Airbus A380s from British Airways, Etihad and Lufthansa, as well as other large types such as the Airbus A340 and Boeing 747 arriving. Some do depart to live another day, while others are scrapped. 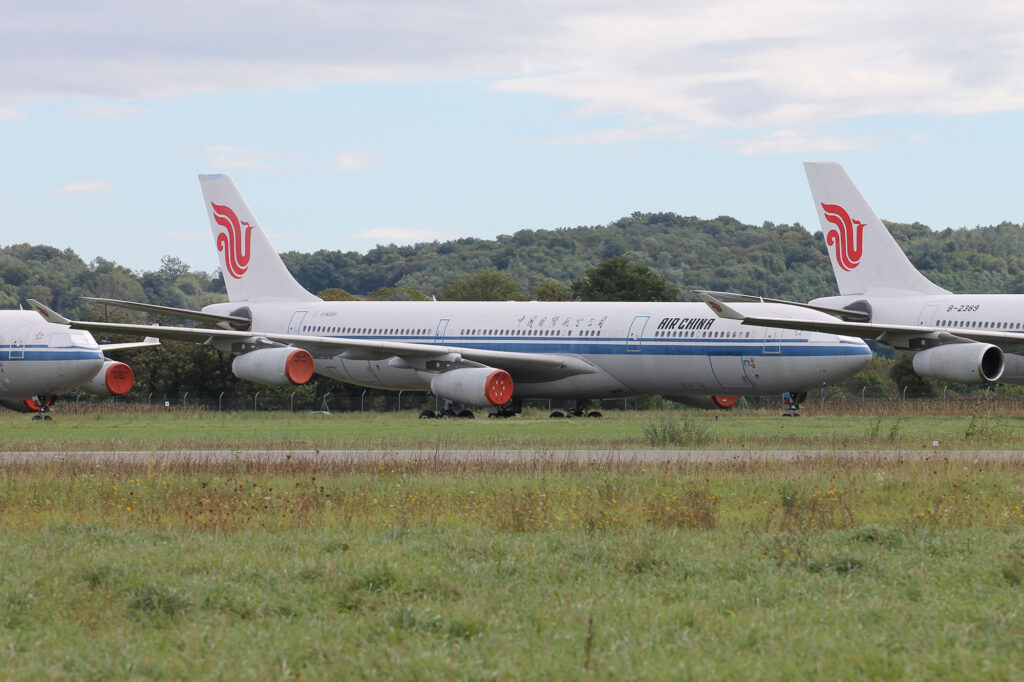 France’s best-known aircraft graveyard is at the regional airport of Tarbes-Lourdes near the Pyrenees mountains in the south of the country.

Aircraft from around the world are processed for parts here and often scrapped. However, you’ll also find some airliners simply in storage, including those produced by Airbus at nearby Toulouse. They can be seen from the airport terminal, or by driving around the perimeter roads.

[Our Guide to Spotting at Tarbes-Lourdes Airport] 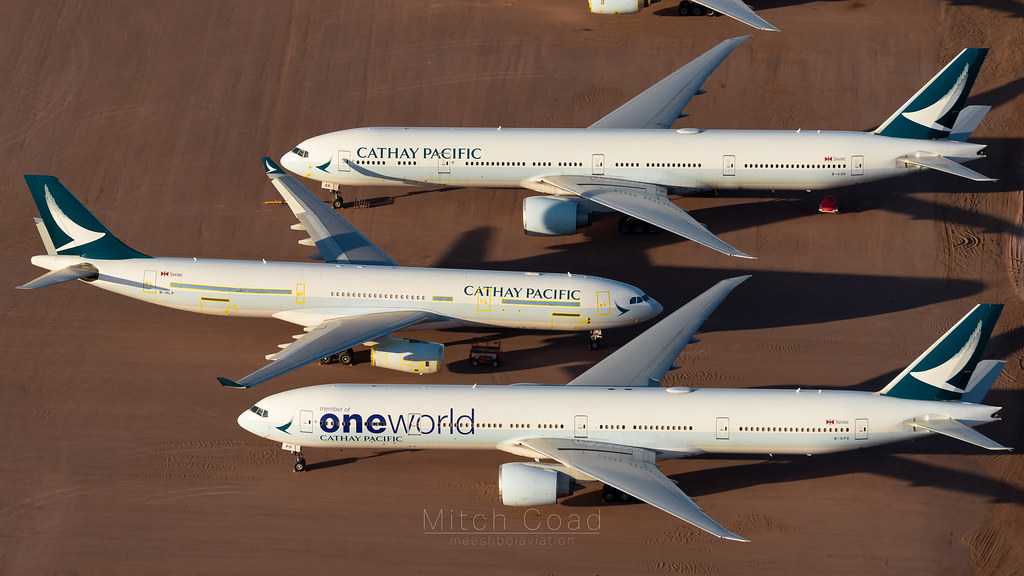 One airport which has grown in stature since the Covid-19 pandemic is Alice Springs in Australia.

This remote, desert airport previously saw a few daily airliner flights. But now it has been taken over by lots of large airliners in open storage pending a recover in the airline industry.

In particular, Cathay Pacific, Singapore Airlines and Silk Air sent many aircraft here, including the Singapore’s Airbus A380 superjumbos, some of which have recently been sent back to home ready for reactivation.

Have managed to visit just 4 of these, Marana, DMA, ASP and Kemble over the years, thanks for the updates.