Recently I had the chance to fly for the first time in a long while. As Covid restrictions lifted, but international travel was still full of limitations and restrictions, I took the opportunity of a trip to Belfast which, while still being an overseas trip to another island, is still within the UK and therefore came with no restrictions or required tests.

My local airport is Teesside International in the north east of England, which after a long period of limited route offerings has recently emerged with new services from airlines like Ryanair and Loganair. It was the latter which would take me and my family across to Belfast.

This was a holiday rather than a spotting trip, but it was certainly nice to be flying again and travelling to another airport! 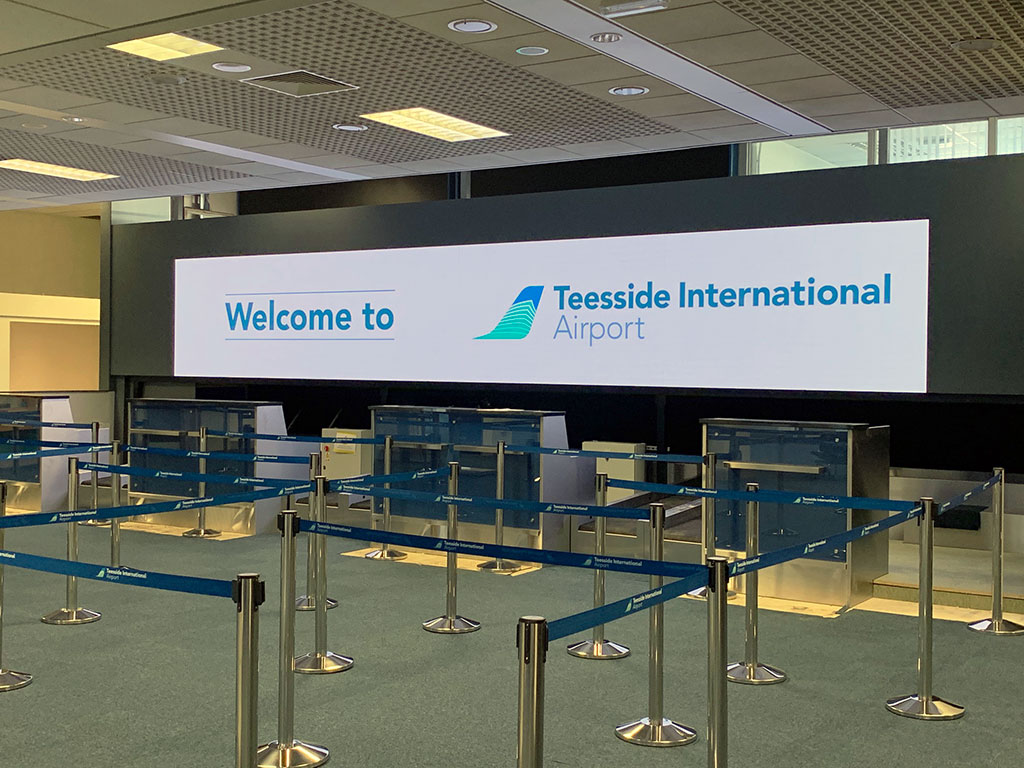 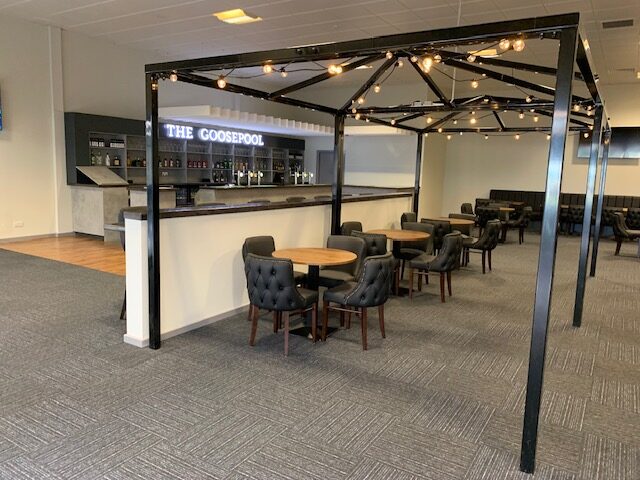 The airport at Teesside came under new ownership a couple of years ago and since then the local mayor has championed its redevelopment and introduction of a range of new routes.

Most recently work has been completed on renovating the terminal to make it more spacious, a little nicer looking and with more amenities like shops, café, bars, improved lounge etc. It also has a dedicated Ryanair holding pen – I mean gate – for those flights, which it is hoped will become more numerous soon.

It was all very impressive. This is the airport that made me a spotter back in the 1980s, and I’ve seen it go through so many ups and downs. It feels like a modern airport again, but still has that local, family feel about it.

Loganair and the Embraer 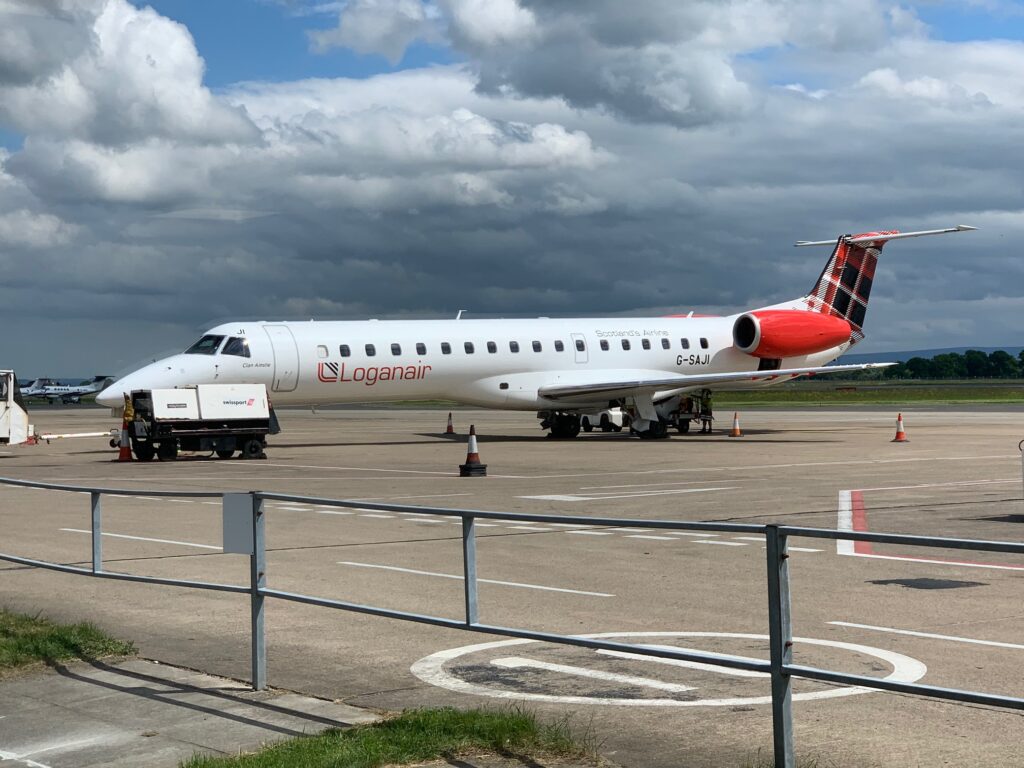 This was my second time flying Loganair (I’d flown the Barra beach landing a couple of years ago – here’s the report), but the first time on their jet aircraft.

In fact, it was my first time ever flying on an Embraer 145, and this flight was operated by G-SAJI – first flown in 1999 and previously operated by British Airways, Flybe and BMI Regional. 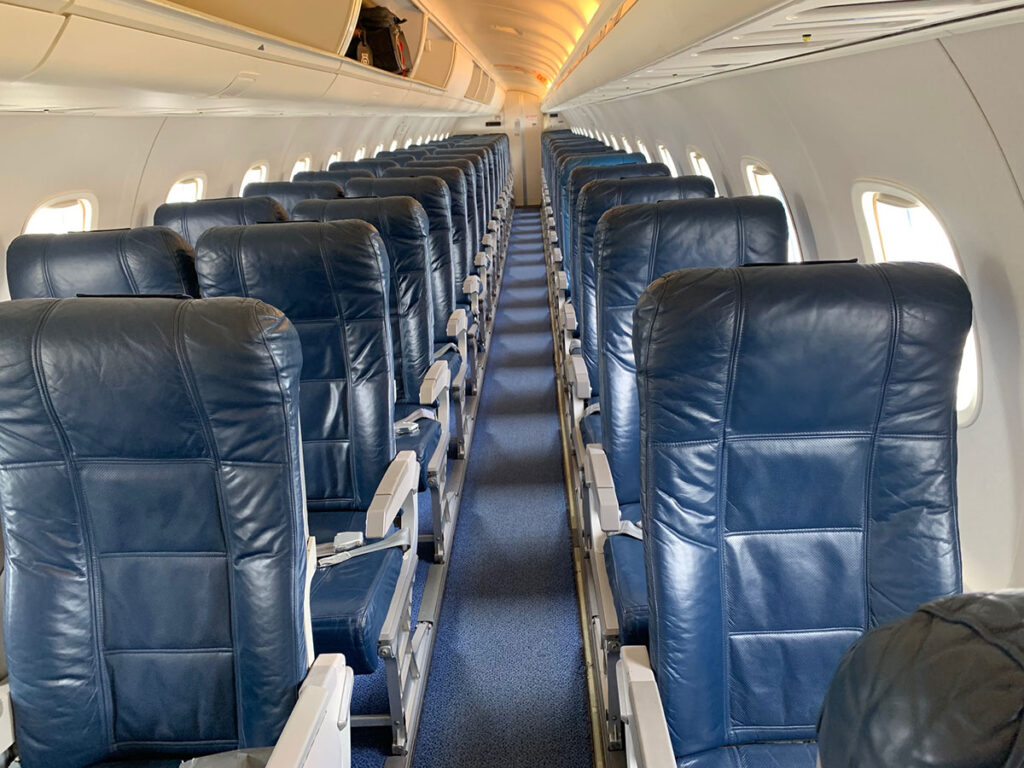 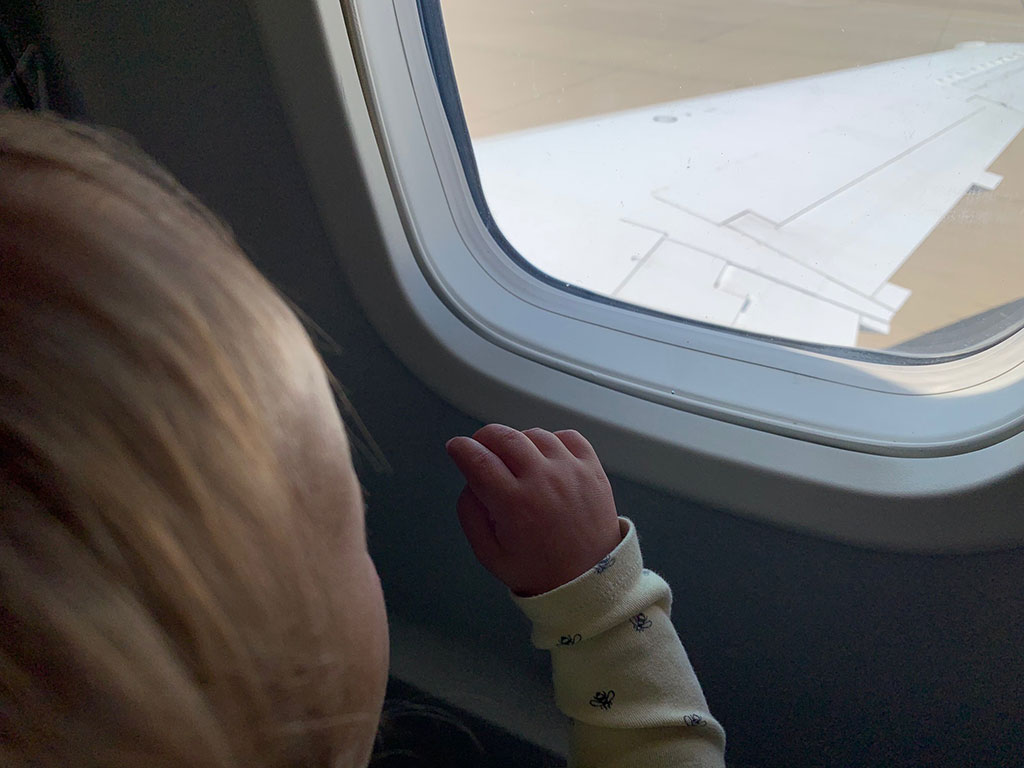 I was travelling with my wife and baby daughter on this trip, so we got to experience the joys of being allowed to board first, and taking a pram out to the aircraft, which was folded up and put into the hold. I also got to have my daughter on my knee the whole trip, which might have become cumbersome if it was a long flight.

Thankfully this one is just a 45 minute trip over to Northern Ireland. 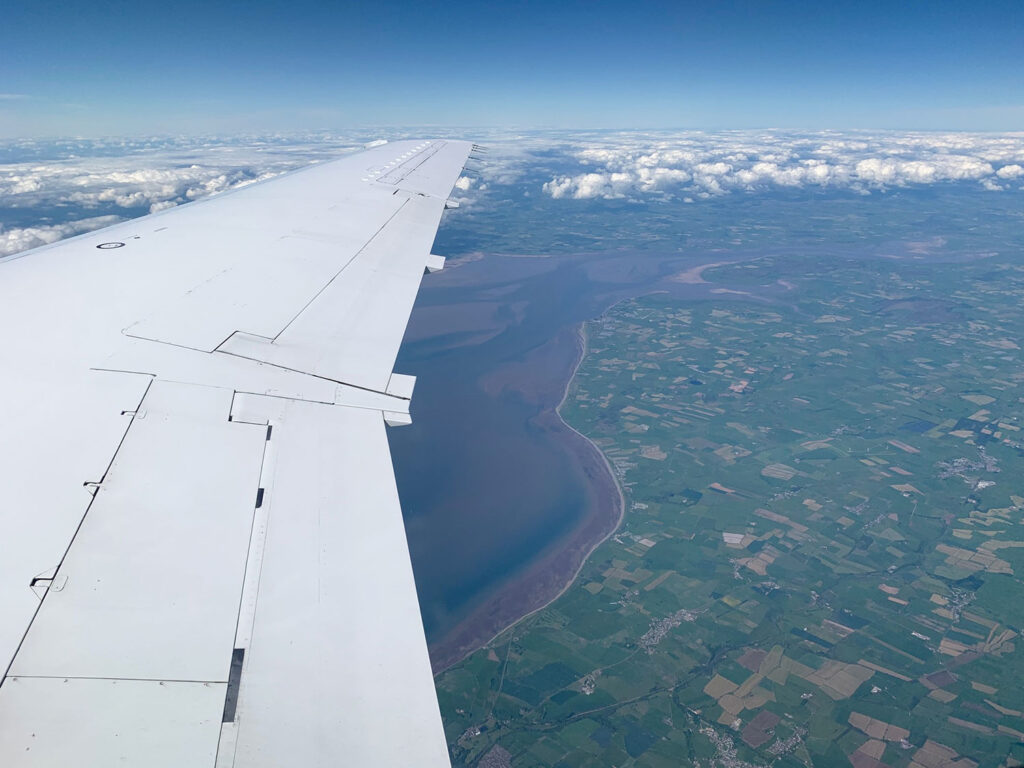 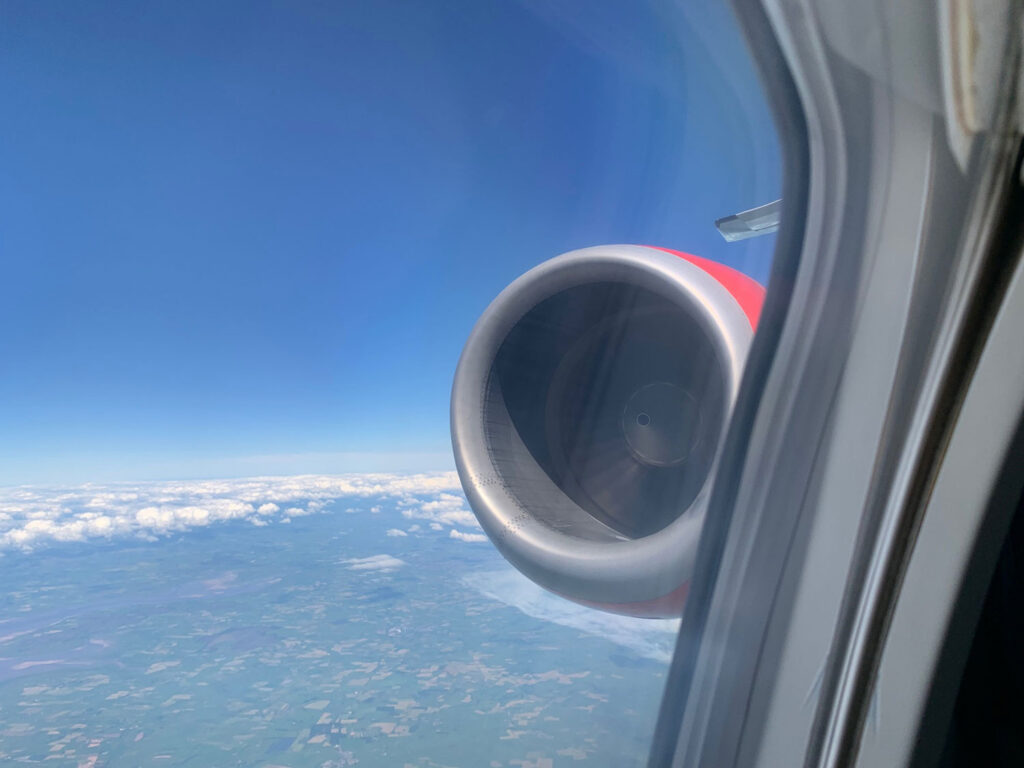 We departed on runway 05 to the east, followed by a left turn to head west, with clear views across the Dumfries coast in southern Scotland as we coasted out over the Irish Sea.

I was impressed by the space on the ERJ-145, and it wasn’t noisy at all thanks to the rear-mounted engines.

With it still being Covid times there was no onboard service, and none of the famous Loganair Tunnock’s caramel wafers (I believe they have since been reinstated). 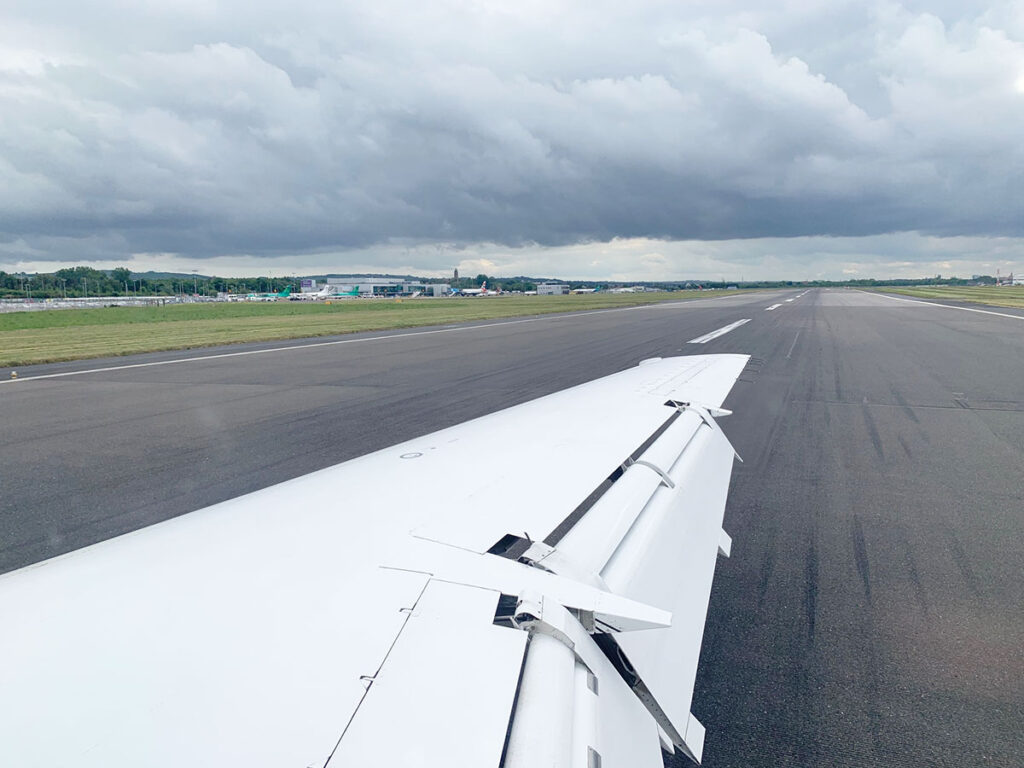 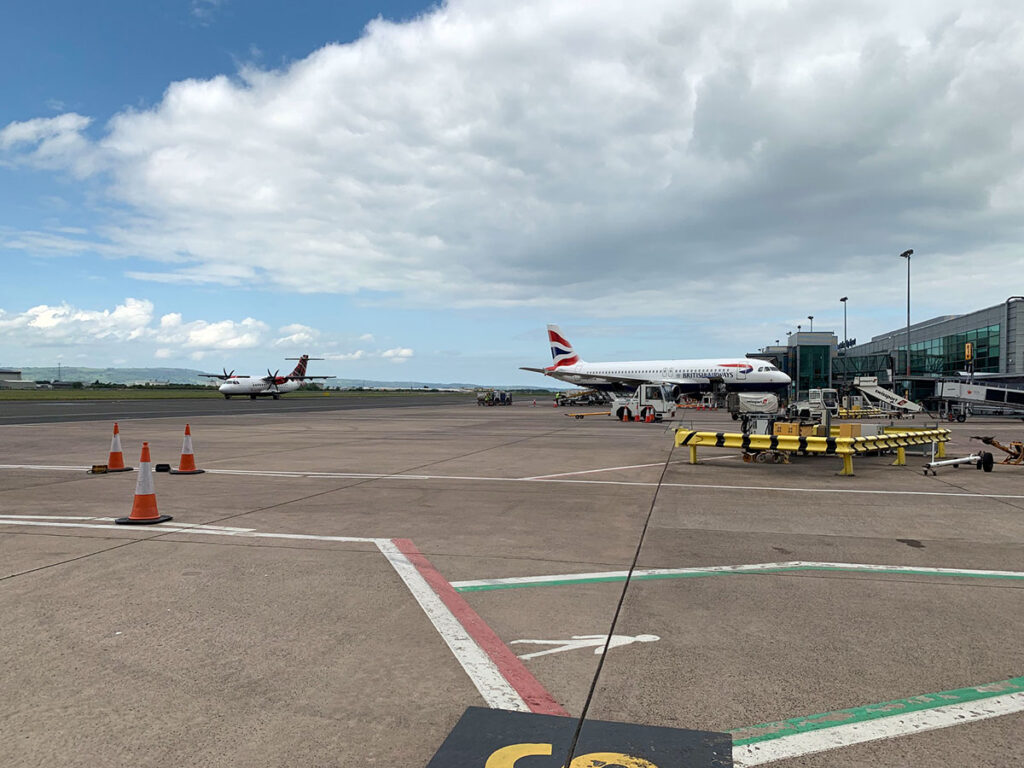 Our arrival was over the city of Belfast and into George Best City airport in the docklands (there is also an International Airport at Aldergrove to the west of Belfast). It has a shorter runway ideally suited to these regional aircraft.

Other aircraft present on our arrival were an Aer Lingus A320, plus Aer Lingus Regional ATR 72s (Stobart Air collapsed a week later), a British Airways A320neo, Ryanair 737-800 and Loganair ATR 72. All were visible on the taxi in.

Like Teesside, Belfast City is a smaller airport and ideal for a quick transition from aircraft to kerbside, and we were quickly in the queue for a taxi to our hotel, enjoying a few days exploring the sights and driving around the Antrim coast.

We stayed at the Hilton Belfast hotel and had a high level room which actually looked towards the airport, so any movements were visible. It is quite quiet, however. 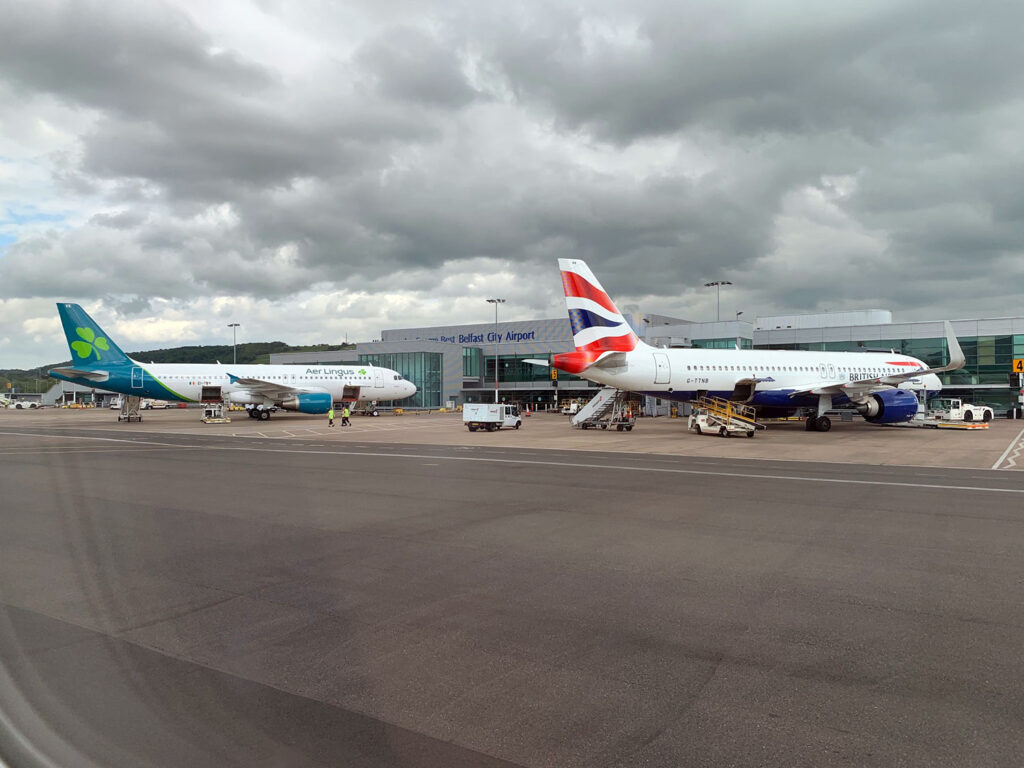 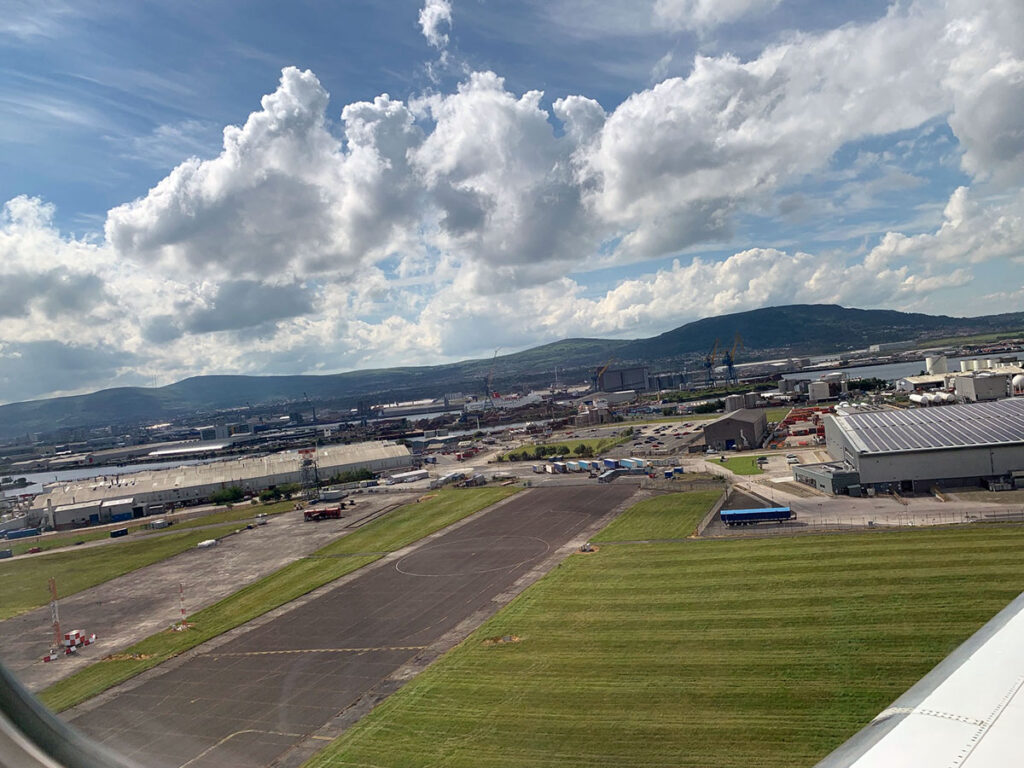 Back at Belfast City airport we checked in for our flight and enjoyed lunch in the departure lounge bar and café area. The other restaurant was closed, but we didn’t have long to wait.

From the departure area you have a good view of the runway and most of the gates, so any aircraft movements can be seen.

Again, our aircraft on the return journey was G-SAJI. We made our way to the gate and were allowed to board first, settling in for the quick flight home. 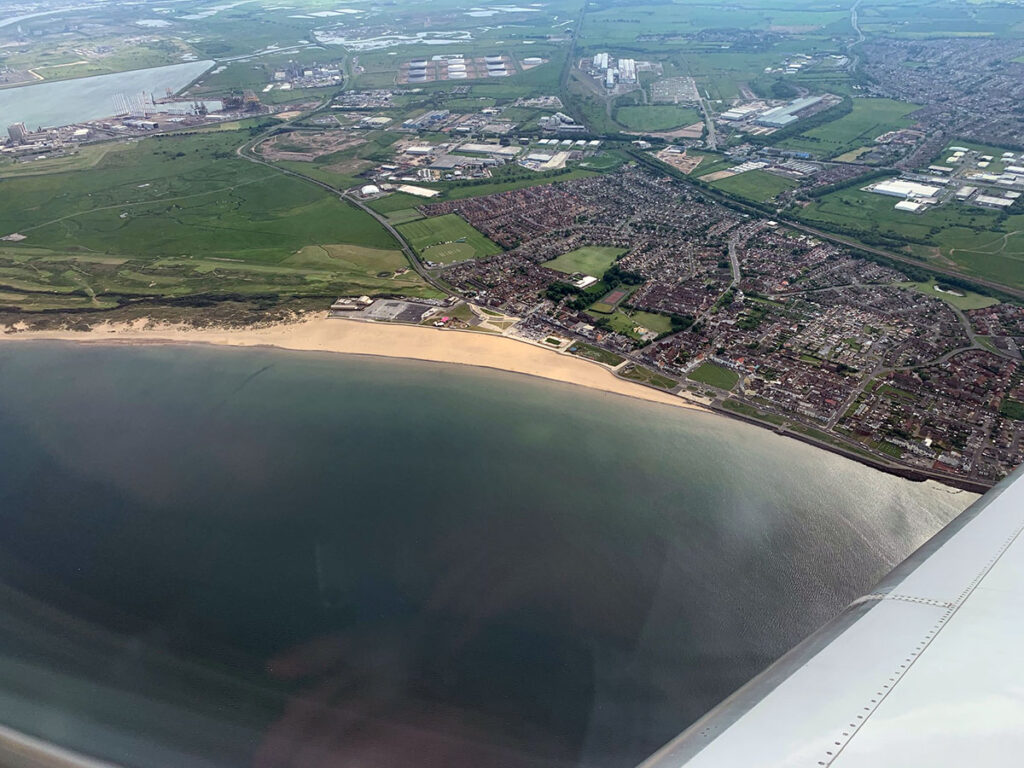 Seaton Carew. No canoes in sight! 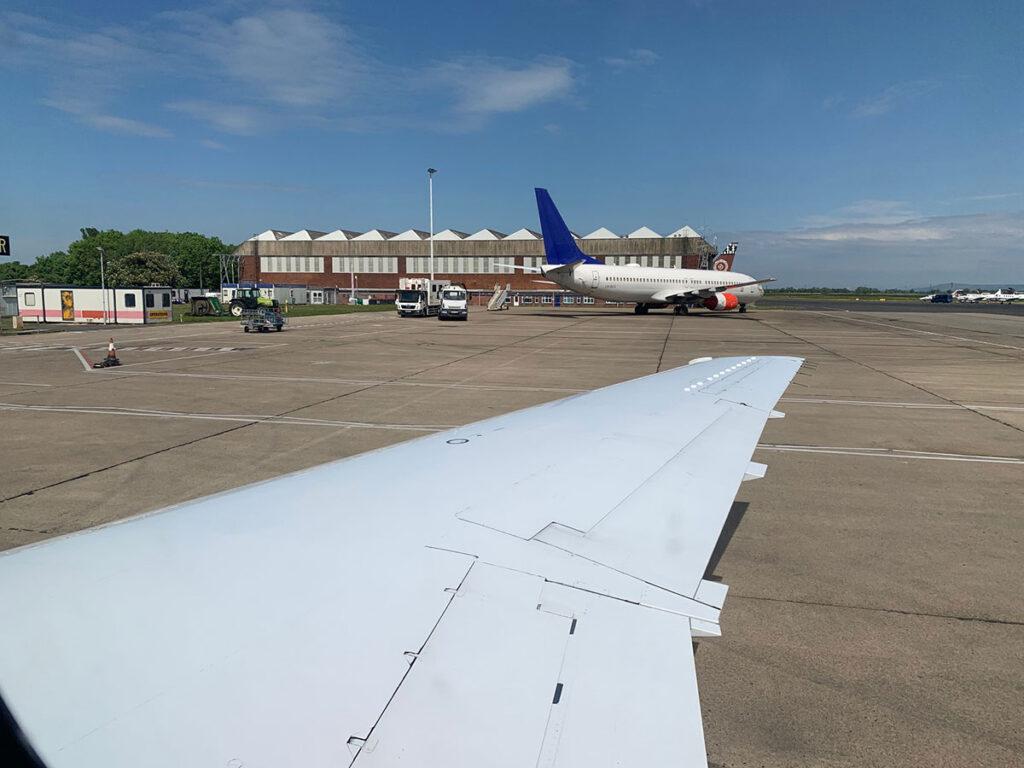 Once back at Teesside we timed it as taking only ten minutes from the engines shutting down to getting in our car, having collected our bags too. Compare that to other airports and you can see the appeal of this place!

All in all a great trip and flight. I’m looking forward to trying Loganair’s London Heathrow service from Teesside, as well as Ryanair’s holiday flights.

Hello Matt, Thanks for your excellent report. I flew the Fokker F28 for Ansett in Australia in the late 1980’s and the ERJ 145 has a very similar configuration. I especially liked the photo taken looking aft from the starboard side window seat, from which you can clearly see the engine cowling intake (which permits a check for icing in the event of a system failure) and also the outboard tip of the high mounted tailplane. The shots of the A320’s parked on the stands at Belfast were great as well. Thanks for the attention to detail, including that you flew in G-SAJI both ways!