The McDonnell Douglas DC-10 was a large, wide-body airliner used principally on long-haul routes, as well as shorter distance trunk routes, particularly within the United States and Asia.

The DC-10 was operated by many of the world’s main airlines, and it was able to compete effectively against rival types like the Boeing 747, Lockheed L1011 TriStar, and Europe’s Airbus A300.

Making its debut in 1970, it was popular until the early 2000s when most carriers phased the type out in favour of modern replacements like the Airbus A330 and Boeing 777.

The UK had a surprisingly large number of airlines that flew the DC-10 through the type’s life, including both scheduled and leisure carriers. Below we remember these UK DC-10 operators. 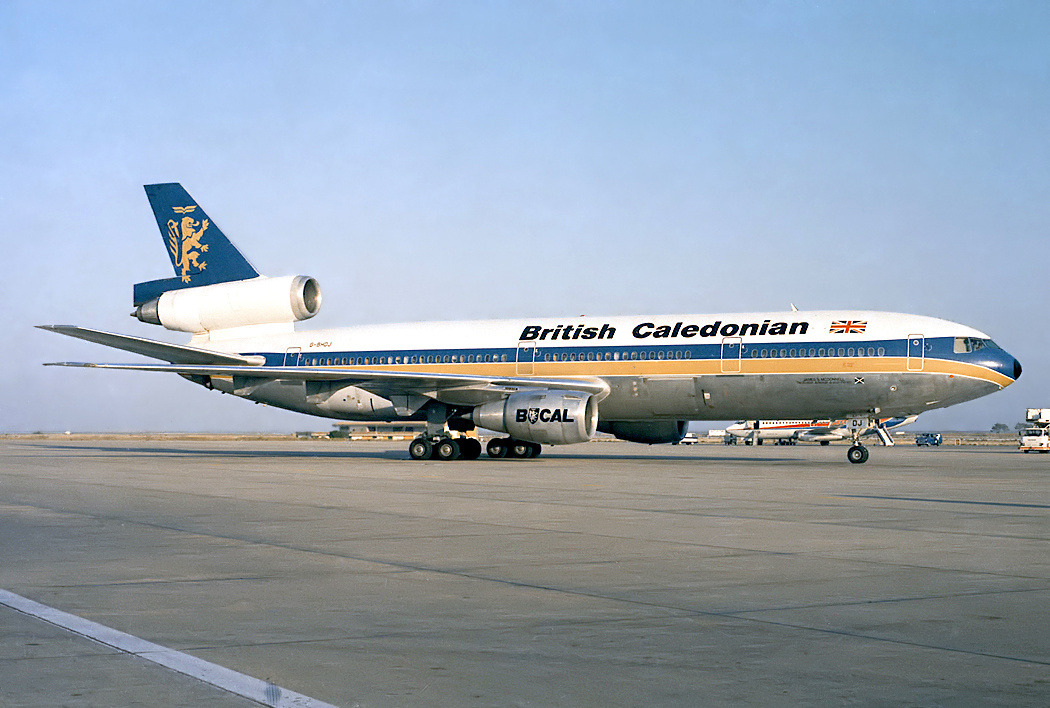 British Caledonian, affectionately known as BCal, flew DC-10s from 1980 until its merger with British Airways in 1988. In fact, its ten-strong fleet were the only aircraft British Airways retained following the merger.

BCal used these aircraft on its long-haul services, and some also wore British Caledonian Charter titles, being operated on high-capacity leisure routes within Europe. 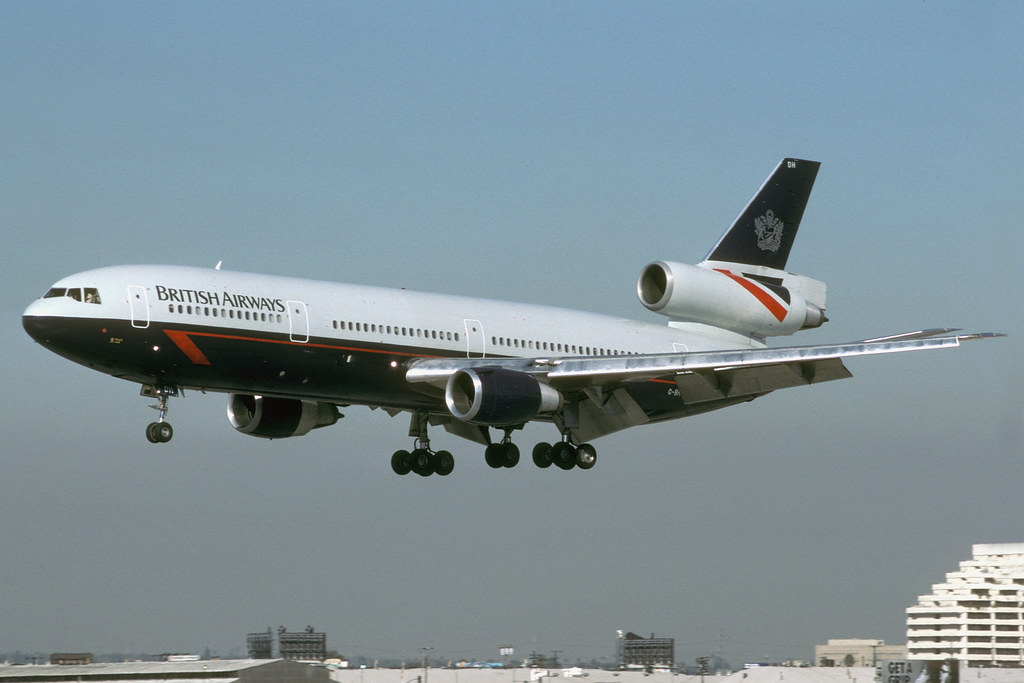 As mentioned, British Airways acquired ten DC-10-30s from its merger with British Caledonian in 1988. These were stationed at London Gatwick, where BCal had been based, and flew long-haul services. They were eventually retired and sold on in 1999. 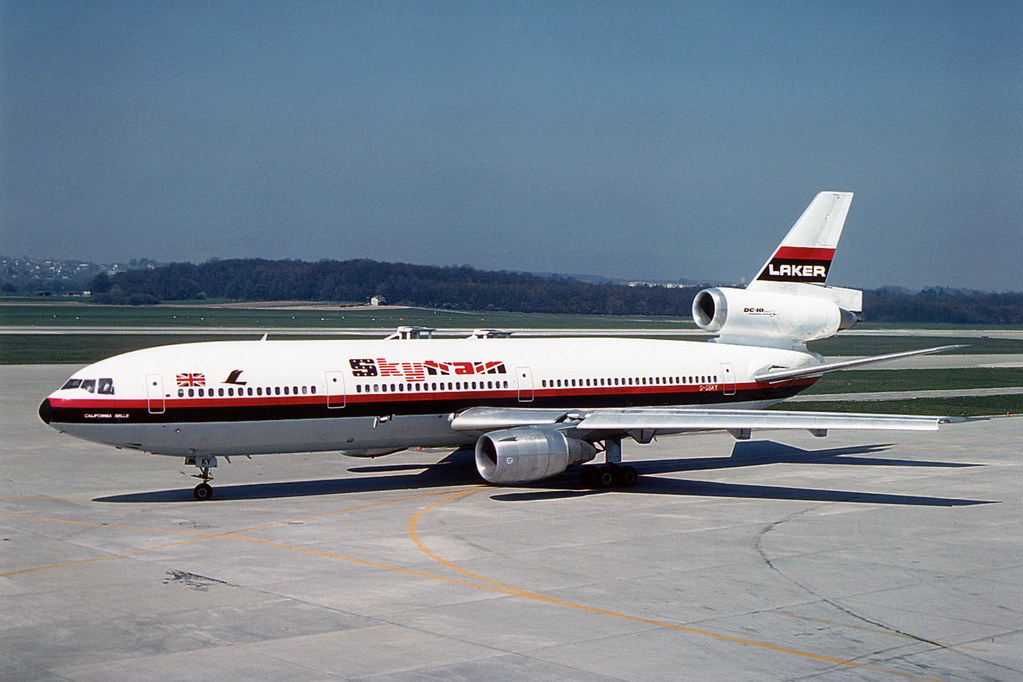 Probably one of the most famous UK DC-10 operators was low-cost pioneer Laker Airways, founded by Freddie Laker to offer cheap transatlantic travel from London Gatwick and other airports in 1966. The DC-10s flew with the airline from the late 1970s, however since these were the -10 model they had restrictions on payload and range. The airline ceased operations in 1982. 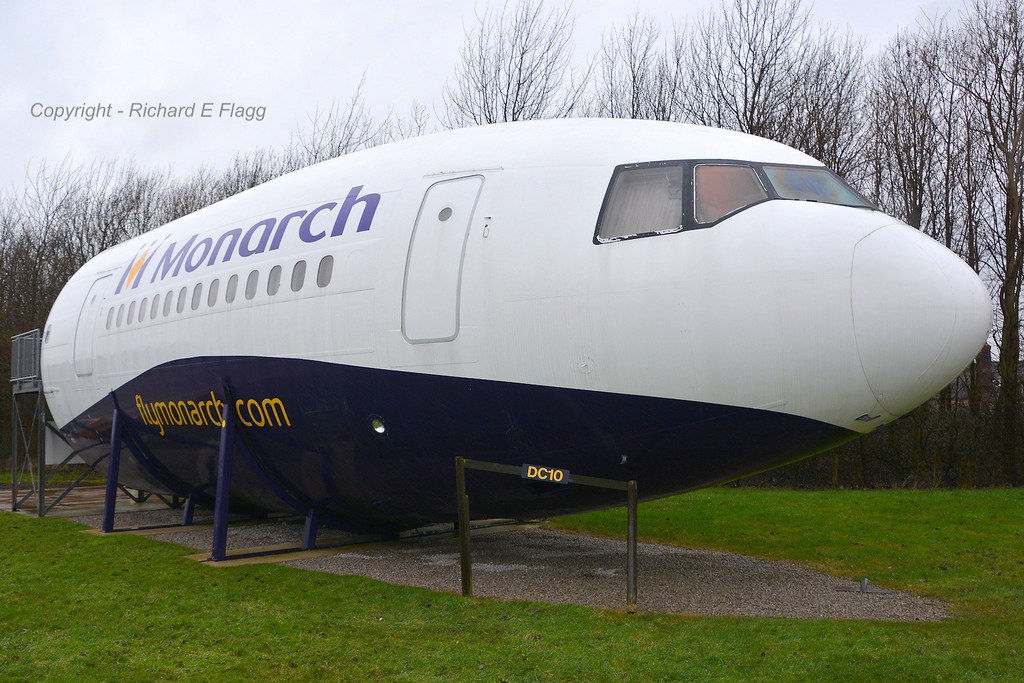 Only a single DC-10 was flown by leisure carrier Monarch Airlines, with registration G-DMCA. It was operated from 1966 to 2002 on routes to European, African, Middle Eastern and North American leisure destinations.

Today the forward fuselage of this aircraft is preserved at Manchester Airport’s Runway Visitor Park and can be visited. 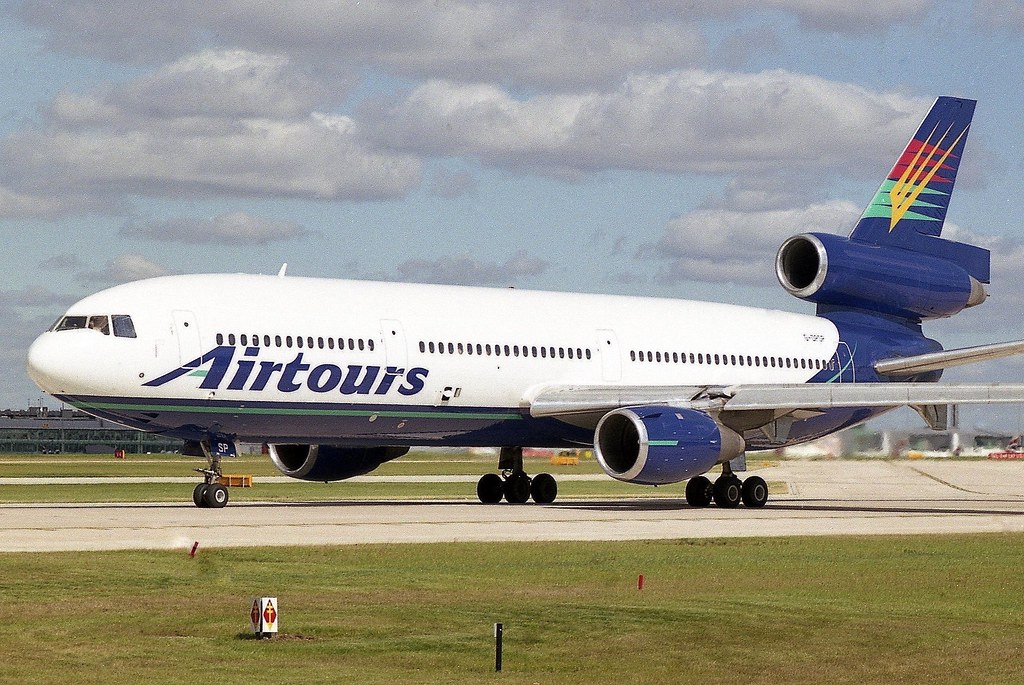 Leisure carrier Airtours International acquired four DC-10s from the late 1990s to capitalise on growing demand for certain destinations, and also to give it long-haul capabilities (alongside Boeing 767-300 and later Airbus A330 aircraft).

Airtours International became MyTravel in 2002, and the DC-10s were retained until 2005, when sold on or retired. This made MyTravel the last UK operator of the DC-10. 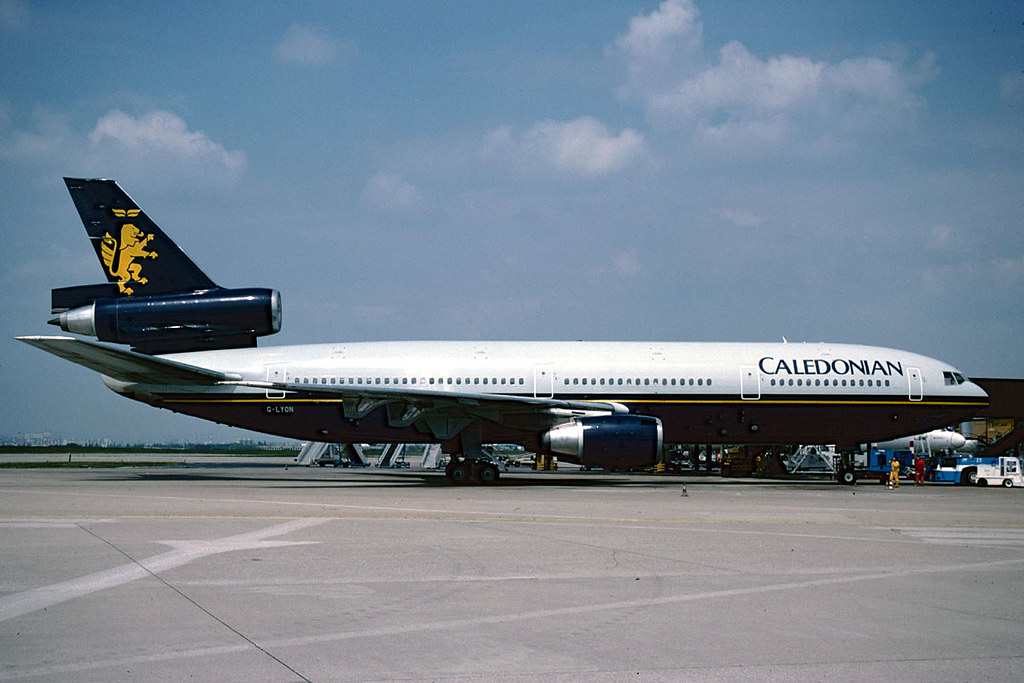 When BCal was merged with British Airways in 1988, BA revised its British Airtours leisure subsidiary and renamed it Caledonian Airways.  This was the second incarnation of this airline name, and retained a modified version of the BCal tail livery as a link to this now lost airline.

Whilst Caledonian’s fleet focussed on Lockheed L1011, Boeing 737, 747 and 757 types (and later Airbus A320s), it also operated DC-10s sporadically throughout its existence. These were mostly temporary leases from BA or other carriers.

At the time of its merger with Flying Colours in 1999, Caledonian had two remaining DC-10s, which went on to operate with the new carrier, JMC Air (see below). 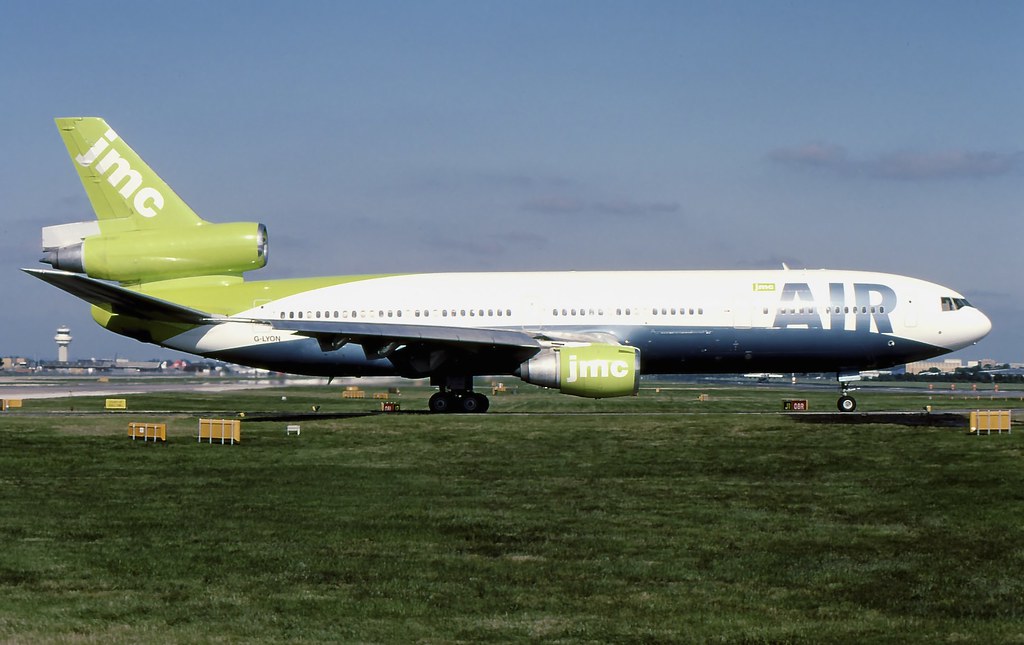 JMC Air (which stood for John Mason Cook – part of the Thomas Cook family) was formed out of Caledonian Airways and Flying Colours, and it acquired two DC-10-30 aircraft – G-GOKT and G-LYON – which were gone two years later, shortly before the airline became Thomas Cook Airlines. 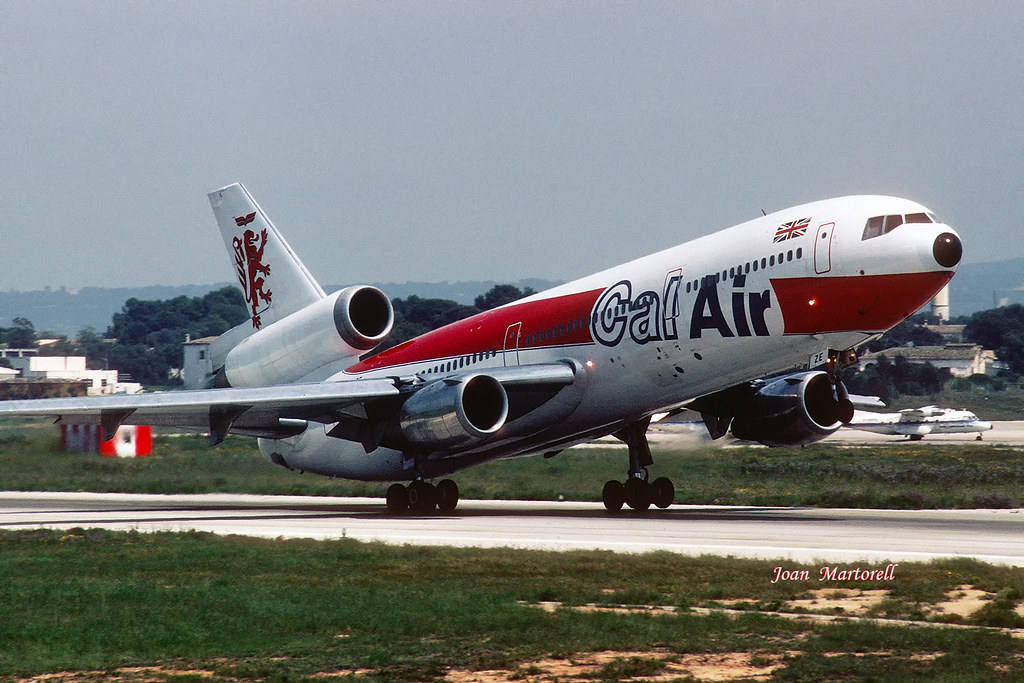 Another London Gatwick favourite, Cal-Air was formed in 1985 to cover some of the gap left by the demise of Laker Airways. It was a joint venture between British Caledonian and the Rank Organisation and flew charters to popular holiday destinations and across the Atlantic. It had three DC-10s in total. 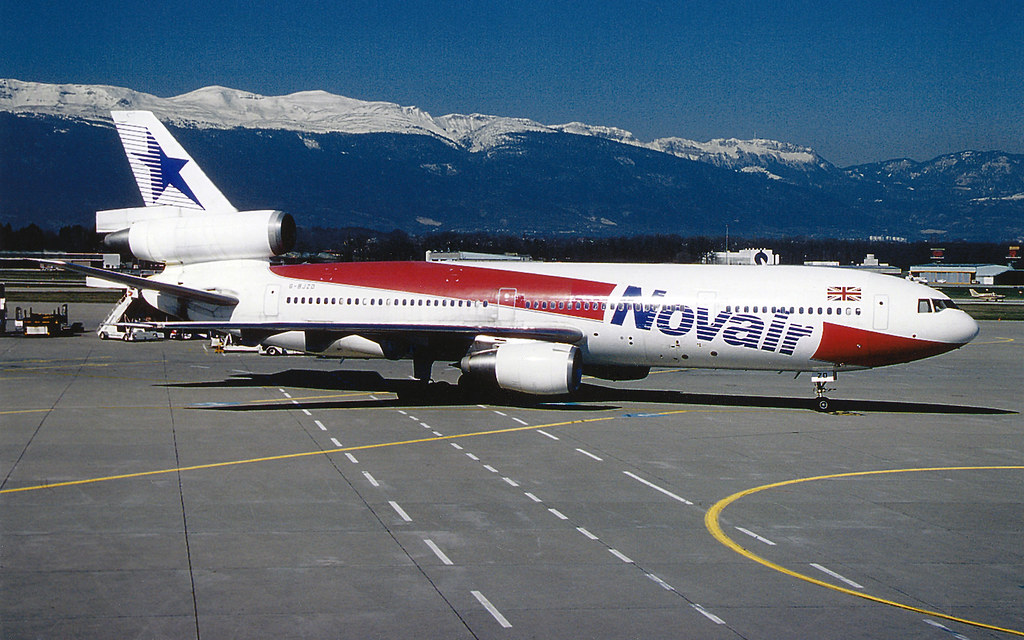 When BCal was merged with British Airways in 1988, Cal-Air changed its name to Novair but kept its livery much the same and operated a similar route network.

However, by 1990 the airline was closed down after its owner failed to find a buyer. The three DC-10s were sold on.

Did you ever fly with one of these airlines on a DC-10? Leave a comment below!

Nice bit of nostalgia! However, a few inaccuracies regarding the BCAL/BA machines. Only 8 of BCAL’s aircraft were transferred to BA following the takeover, 2 already having been disposed of when BCAL introduced its 747 fleet. Your piece on the fates of the BA DC-10s confirms this. Also, these were not the only ex-BCAL aircraft to be retained by BA. The BAC One-Eleven fleet was kept in service for a number of years, and even BCAL’s 5 747s lasted a couple of years with BA, although being non-standard (GE-powered), they were disposed of in 1990.

Thanks for the clarification Iain!

I remember flying Laker DC10 across to JFK in August 1980. Great value for money as Sir Freddie always provided. On the way back, the movie shown was “Airplane”! First flew with Freddie back in December 1960 when he was head honcho of British United Airways – a trouping flight from Stansted to Aden that took around 10 hours overnight in a Bristol Britannia. Many serviceman/women appreciated that BUA provided a hot evening meal, compared with a bag of sandwiches on BOAC and Cunard-Eagle charters!

The DC10, despite its bad publicity and setback still held a measure of respect (Considering many Military governments used and continue to use them to date.)
Perhaps as often there is banter between BMW and Mercedes owners or Canon users and Nikon likewise DC10 or TriStar.
For me DC10 always!
I also have another UK example of the DC10 operator – MyTravel leased from Airtours for a period of time G-DPSP

The -10 was not intended as a transAtlantic aeroplane. Freddie was stretching the envelope, but the aircraft was so powerful, that an imaginary waypoint was used halfway across the Atlantic, so that in the event of two engines going out, the -10 could theoretically “glide” to land, depending on which side of the line it was. Fortunately, never used.

My only flights on a DC10 were with Novair to/from ACE on G-BJZD & G-BJZE, these flights were also my first wide body flights too.

In 1986 I flew from Gatwick to Ibeza on a Cal Air DC10,it was in a very colourful livery I think it had an Elephant painted on it.My mate thinks I imagined it as we can not find s picture of it anywhere on the internet. Can anyone please confirm that it did exist.

For the Airtours Internation fleet the first arrival was a -30 not a -10. The next 3 were -10s transferred from Premiair as their 330s arrived

Having worked for Laker Airways, i would like to correct you. We had 6 DC10,10’s, ( G-AZZC, G-AZZD, G-BBSZ, G-BELO, G-GFAL, & G-GSKY,), and 5 DC10.30’s, G-BGXE, XF, XG, XH, & XI. The series 10’s we operated had modified centre tanks, so had more range than the basic model 10. 10, which meant the JFK route was within their range. Interestingly, G-BELO was the prototype DC10, which went on to fly as the flying eye hospital for Orbis, only retiring a few years ago, & is now preserved at the PIMA Air museum in.Tucson.It also flew as one of the 3 Cal air/ Novair aircraft along with G-GFAL, & SKY, the latter becoming G-BJZD & E with them. The 10 series inaugurated our LAX setvices via BGR. The direct services enabled when we introduced the 30’s on the route. One series 10, G-BBSZ, also wore Caribbean Airways titles for their scheduled flights along with some of the 707’s.

Thanks for the corrections, and the interesting insights Clive!