The Dangers of Automation in Airliners – Book Review

Despite air travel being at its most advanced and safest period ever, where we can experience flight aboard incredibly sophisticated aircraft that have all of the latest technology to ensure none of the common dangers of the past, many of the most notable accidents in recent years can be attributed to problems with automation.

Airliners today can effectively fly themselves. Pilots in the cockpit are there to plan and monitor the flight, and essentially act as a backup to the aircraft’s systems. Yet for much of any flight, autopilot takes over.

Unlike early autopilots, first developed by Lawrence Sperry in 1914, which could simply hold an altitude or course, today the computer systems on board modern airliners are the result of years of specialised development to effectively control the aircraft and ensure its safe navigation in any situation.

This new book looks at how these automated systems, and pilots ever increasing reliance on them, has led to numerous aircraft crashes and incidents which could easily have been avoided.

It looks at incidents such as the Asiana Airlines Boeing 777 crash on landing at San Francisco, which was a real eye-opener into the poor airmanship of the crew, plus the Turkish Airlines 737-800 crash on approach to Amsterdam which was caused by a known error on the aircraft that led to the crew not handling the aircraft properly.

Others include the Colgan Air Dash 8 crash on approach to Buffalo, NY, and the infamous Air France A330 crash over the Atlantic between Rio and Paris.

One of the most interesting sections of the book covers the two crashes of the Boeing 737 MAX aircraft, which led to the worldwide grounding of the type.

While the crashes have been well documented, with the cause blamed on the faulty MCAS software which forcibly lowers the nose of the aircraft against the pilot’s will, what Jack Hersch does in this book is explain exactly why this happened and what the background of the software is. This is explained in an easy-to-follow way, and I felt like I understood the issues much more clearly after reading this book.

One of the things I really like about this book is that it isn’t just a series of crash reports, telling of the mistakes made by crews and how it could have been avoided. It goes into detail about how automation arrived, the intricacies of how aircraft work (explained in layman’s terms) and how it all fits together.

It is easy enough for someone with little knowledge of aviation to read, whilst having enough detail to keep a knowledgeable enthusiast hooked.

The descriptions of the crashes and moments leading up to them is as captivating as watching an episode of Air Crash Investigation, while the summaries and explanations give real detail into what went wrong. 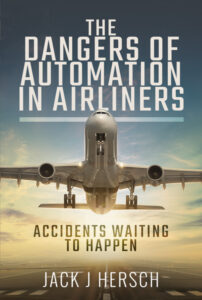 The Dangers of Automation in Airliners by Jack J. Hersch is published by Pen & Sword.

It is available now.