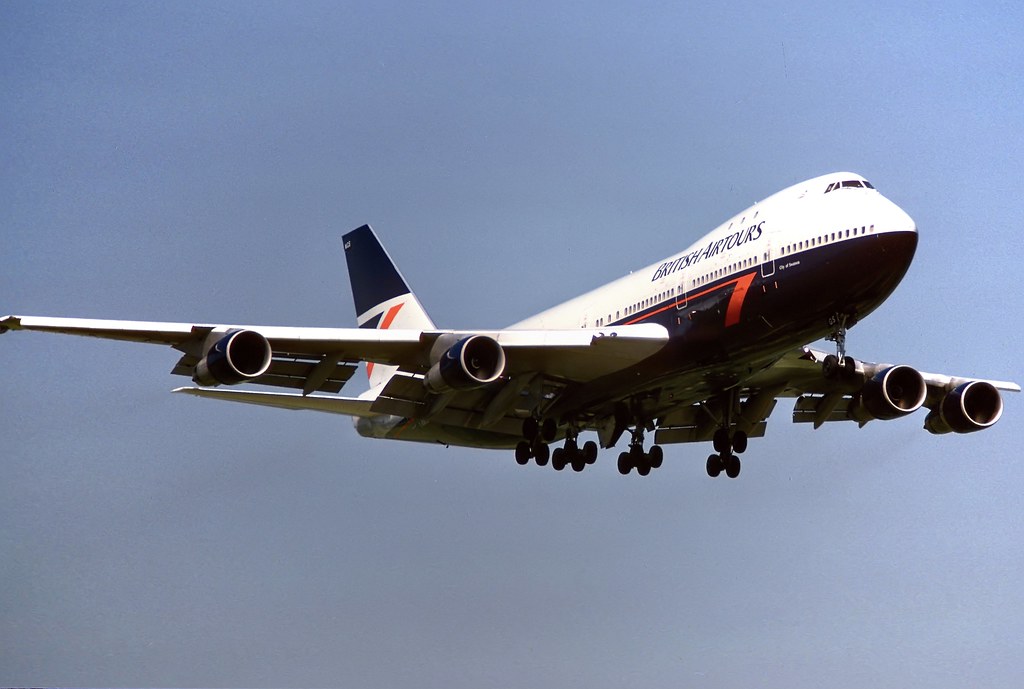 Back in 1989 I was a 9 year old kid and we were about to go on a family holiday to Florida from the UK. It was quite early in the age of long-haul charter holidays, and most of the aircraft plying the transatlantic were large, 4-engined jets.

However, when my dad came home with the tickets I saw the airline code CKT, which I knew as Caledonian Airways (even as a youngster I was pretty obsessed with all things air travel related).

So I assumed we’d be travelling on a Lockheed TriStar, which I knew the airline operated.

But, when we arrived at Manchester Airport that October day and reached the gate, I saw the familiar shape of a Jumbo Jet ready to whisk us off to the sun of Orlando.

This aircraft was 747-283B G-BMGS, which wore the full livery of Caledonian Airways (the charter arm of British Airways at the time). Three weeks later it would also be the aircraft that flew us home.

These were to be my only two flights on the classic models of 747 (I’ve flown plenty of -400s since), and it began an interest in the history of this particular aircraft, which as it turns out was quite varied.

The 167th Boeing 747 rolled off the production line at Everett was destined for Scandinavian Airlines System, or SAS as we know it.

The aircraft entered service in November 1971 with the registration OY-KHA.

It bore the name Ivar Viking and wore the classic livery of SAS.

By 1982 the aircraft had changed to the Norwegian register, now as LN-AEO, but with the same name. 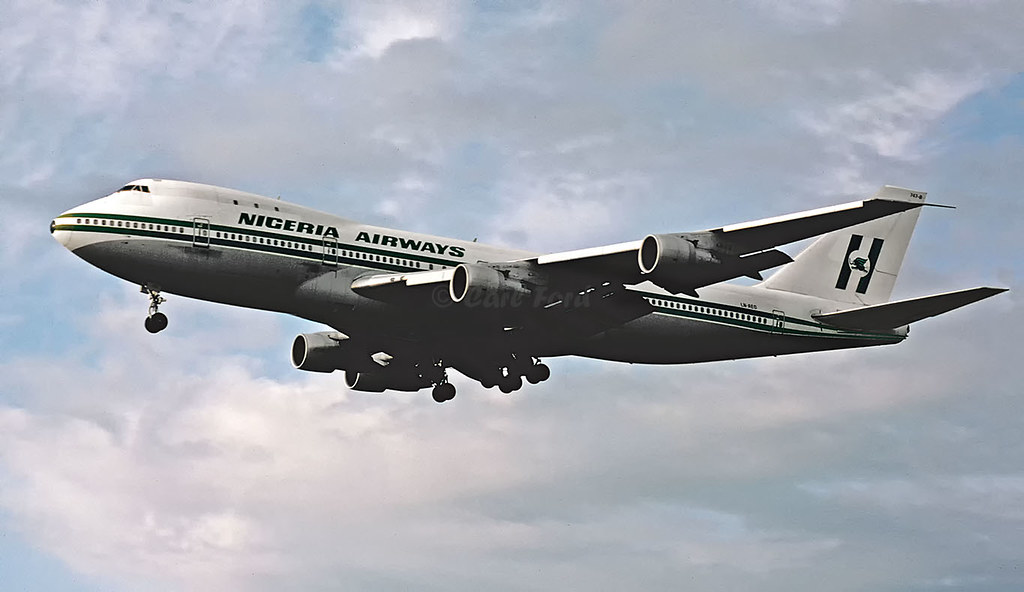 It spent a brief spell on loan to Nigeria Airways and appeared in their full colours, albeit on the Norwegian register. Pictures at the time show it flying into Heathrow.

It would be painted in the updated all white SAS livery around this time.

The aircraft was used on the long-haul services of SAS out of Copenhagen, Oslo and Stockholm to North America and Asia, and would have been quite smart inside with different class cabins and great onboard service as the airline was known for. 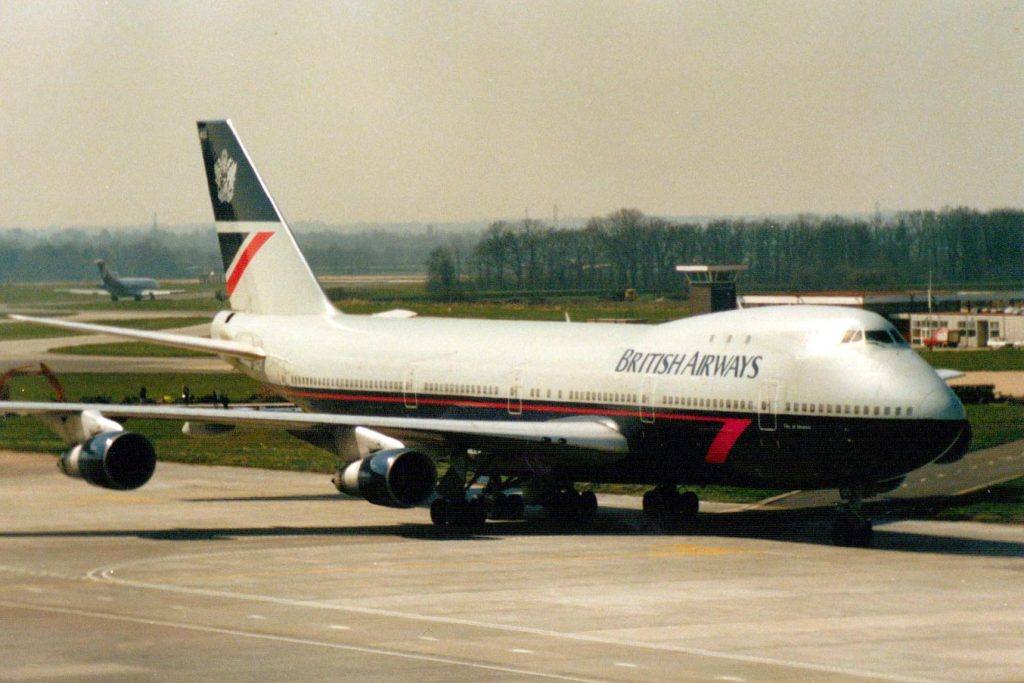 By the late 1980s SAS was updating its fleet and the 747 was being phased out. Our aircraft was returned to its lessor in March 1986 and a few days later leased to British Airways with the registration G-BMGS.

The aircraft was named City of Swansea, however within a month it was transferred to the British Airtours charter arm to operate long-haul and high-density leisure flights.

In 1987 it appears to have been operated by British Airways again, until June 1989 when it was sent to the new Caledonian Airways, which had been created the year before by rebranding British Airtours. 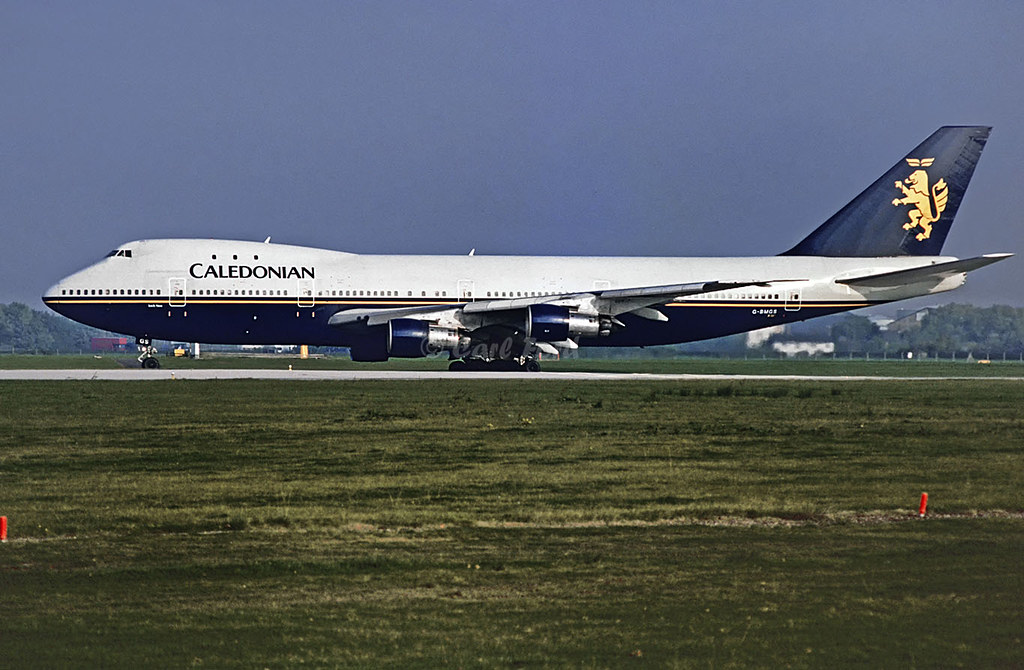 G-BMGS was now renamed Loch Ness and pictures of the time show that it appeared on flights to a number of worldwide destinations, including Los Angeles, Miami, Toronto and Orlando, which is where I flew it to around the same time. It was mostly operating out of London Gatwick and Manchester. 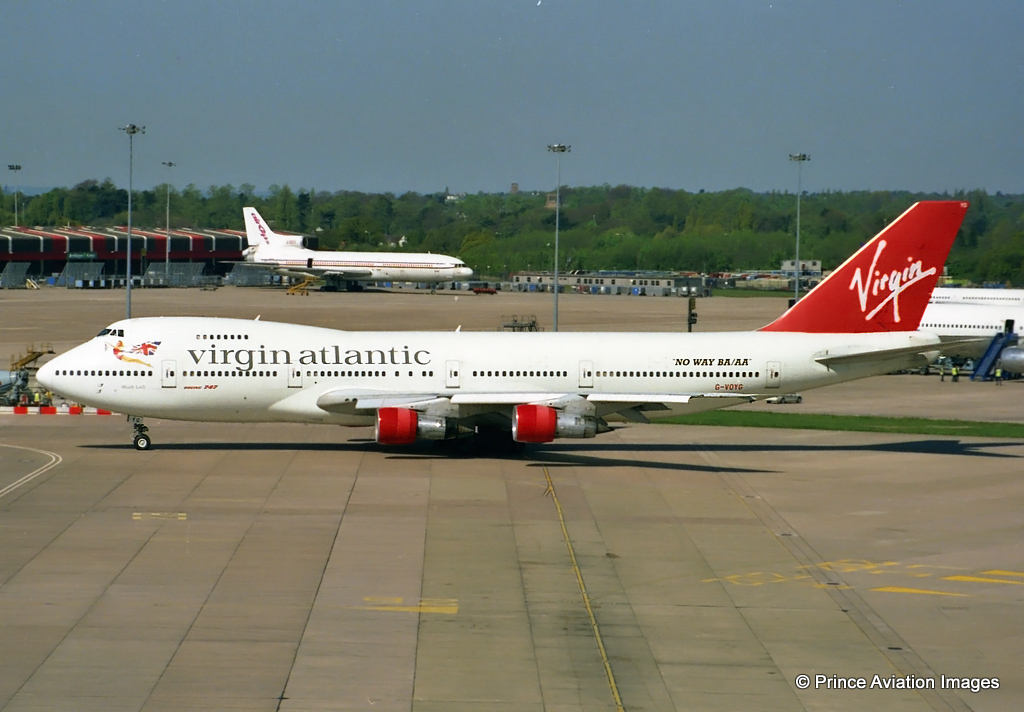 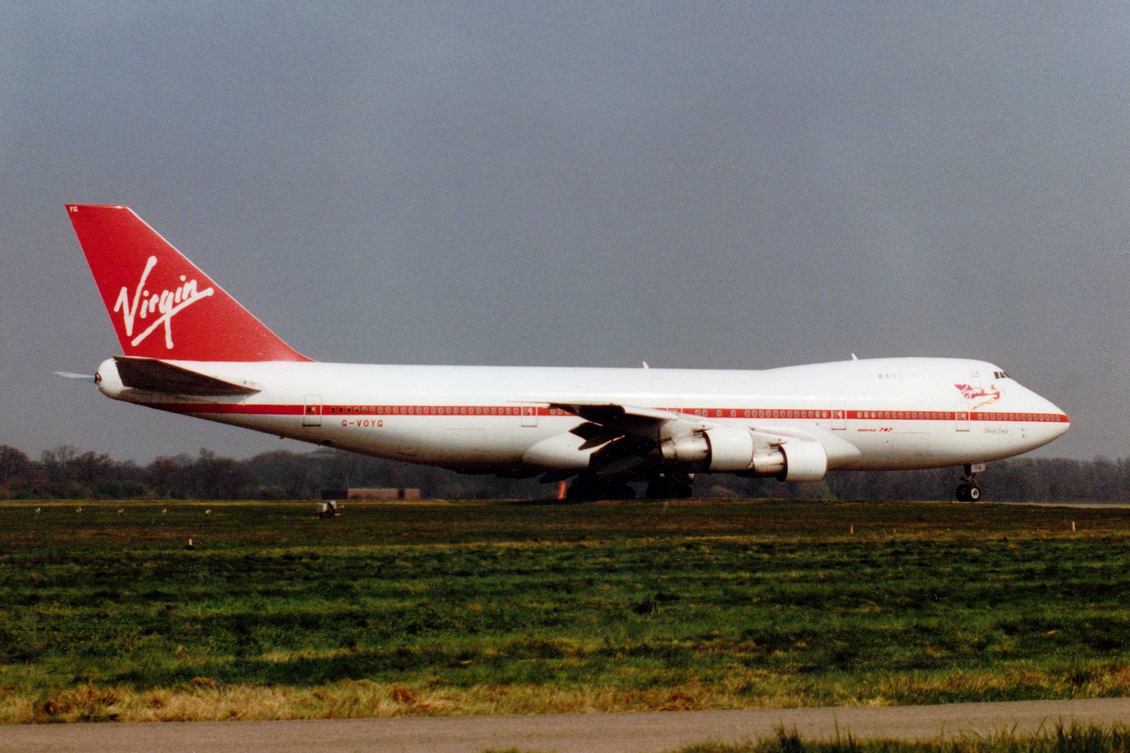 Presumably quite large for Caledonian’s needs, and hard to fill during the lean tourist months, G-BMGS was soon to move on to pastures new.

In fact, only a month after I flew her she was again flying for British Airways, before being returned to its lessor in February 1990.

Another British Airline at the time was growing its fleet of Jumbos and snapped up this aircraft. This was Virgin Atlantic, who re-registered her G-VOYG and gave her the name Shady Lady.

The aircraft was now flying out of Gatwick and Heathrow to cities in North America in the red-and-white livery of the fledgling carrier and would remain there for the rest of its life.

I remember seeing her at Heathrow in 1994 (now a teenager) and realising it was the classic I had flown a few years earlier.

All Good Things Come to an End

By the late 1990s classic 747s were getting long in the tooth, and this grand lady was no exception.

Virgin Atlantic retired Shady Lady in November 1998, and she was flown to Kemble in Gloucestershire – an airfield I’m sure you know is the place where airliners go to die.

She was scrapped completely by February 1999.

I have more of an interest in this aircraft than most others, as a happy childhood memory. There are quite a lot of pictures out there of her in her different liveries. Sadly I don’t have any of my own trip on her!

I’d also love to see any of her at Kemble.  So if you have any pictures of G-BMGS, G-VOYG, OY-KHA or LN-AEO, please post them below or email them to us! 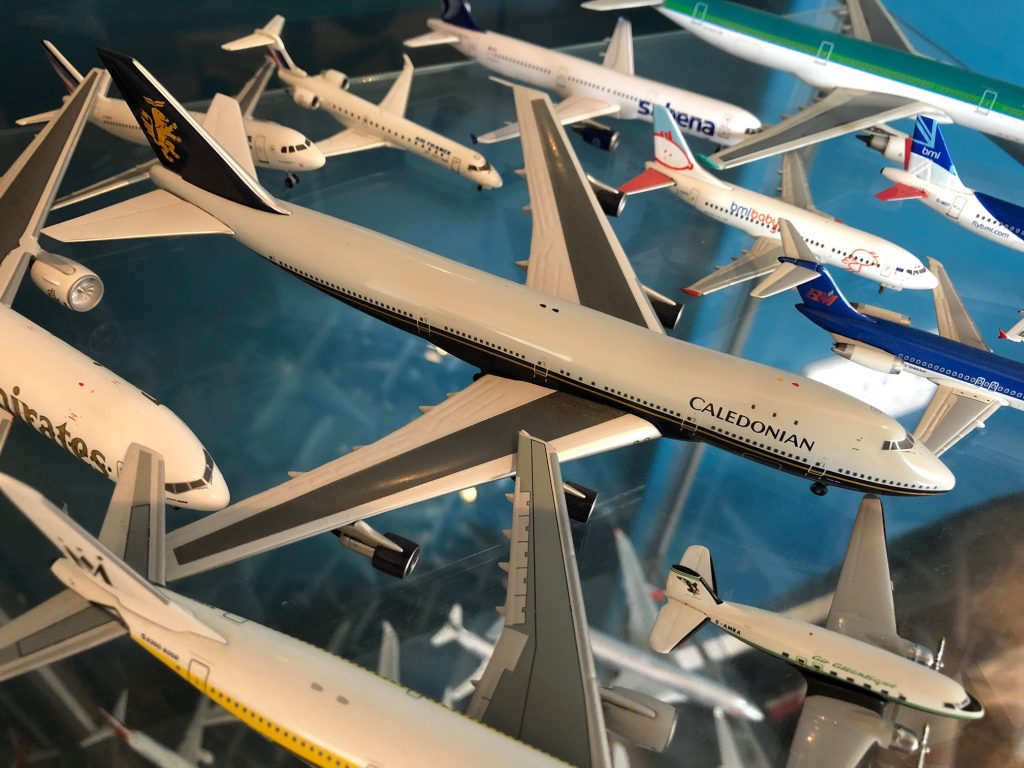 Interestingly, as a collector of 1:400 models, there are a number available of this actual aircraft. You can find models of G-BMGS in both British Airtours and Caledonian colours (I have the latter), as well as the Nigerian Airways LN-AEO. There’s also a 1:200 scale model of LN-AEO in SAS livery.

Picture of my model

Hi Matt, I too flew in G_BMGS in the same time as you did….Maybe we could have been on it at the same time. We went to Florida on it …..But a strange thing happened to G_BMGS on its return flight to pick us up…On route a lady passenger had a heart attack and the aircraft landed at JFK NewYork …By the time the medics got her off the plane. The Pilots flying time was up…The Aircraft came for us the next day ….and yes it was Loch Ness. I’ve sent this photo I took from the departure lounge on a very wet Florida day. Hugh Semple

Fantastic, thanks Hugh! Perhaps we were on the same flight! Although we weren’t diverted on the way home, so that one was different. Thanks for the picture – really brought back memories!
Matt

It was with BA right about the time I went to London for the first time with family from Ord…I wonder if I flew on it myself that trip!

Be interesting if you did! Matt

I came to know of this aircraft from the video:
https://www.itvv.com/civil-aviation-on-demand/ppv/instant-flightdeck-streaming-documentary/boeing-b747-200-5028940030715.html

for a very short time, this video was available in full on YouTube, but then the copyright holder got it removed. (boo…boo) but understandable, because they, (ITVV) are still selling it for streaming video on their site. I still think wort it for 10quid.
A wonderful video full of that unique British understated humour.
Since then I’ve found that this a/c has quite the past and quite the following. I was very sad to hear that it was broken up almost 20 years ago.
-Michael.