Diogo Monteiro looks back at the history of Queen Elizabeth II’s use of air travel.

Her Majesty Queen Elizabeth II. Such an iconic figure in the United Kingdom that it dissolves in the country’s history. She has experienced wars, pandemics, economic crises, and scandals among the royal family. She started with Churchill and ended up with Liz Truss.

She led for seven decades. She swore in 15 Prime Ministers. She was a mother, grandmother, and listener, but most of all, devoted to the British people. Her biggest passion.

Queen Elizabeth II will certainly go down in the history books for all her devotion to the United Kingdom and all of the Commonwealth countries. She was an exemplary Head of State, and her influence will be perpetuated for generations to come. She was born not to be Queen, but by the irony of fate she ended up being one, earning the people’s affection and respect.

In her efforts to maintain the presence of the United Kingdom , Elizabeth frequently traveled to the countries that once belonged to the British Empire (now largely part of the Commonwealth), always showing herself to be close and concerned with all those who were part of that great imperial family.

In 2022, Her Majesty Queen Elizabeth II died peacefully at her home in Balmoral, Scotland, leaving a country in mourning. However, this monarch, who had the longest reign in UK history, leaves us with a chest full of memories. Among these, are aeronautical ones. She used different types of aircraft on short and long trips using types intended for royal transport or even commercial planes and helicopters.

Let us remember, though her royal travels, the journey of Her Majesty Queen Elizabeth II in the leadership of a heterogeneous and, above all, peculiar United Kingdom. God Save the Queen.

A Journey That Would Change Her Life (Forever) 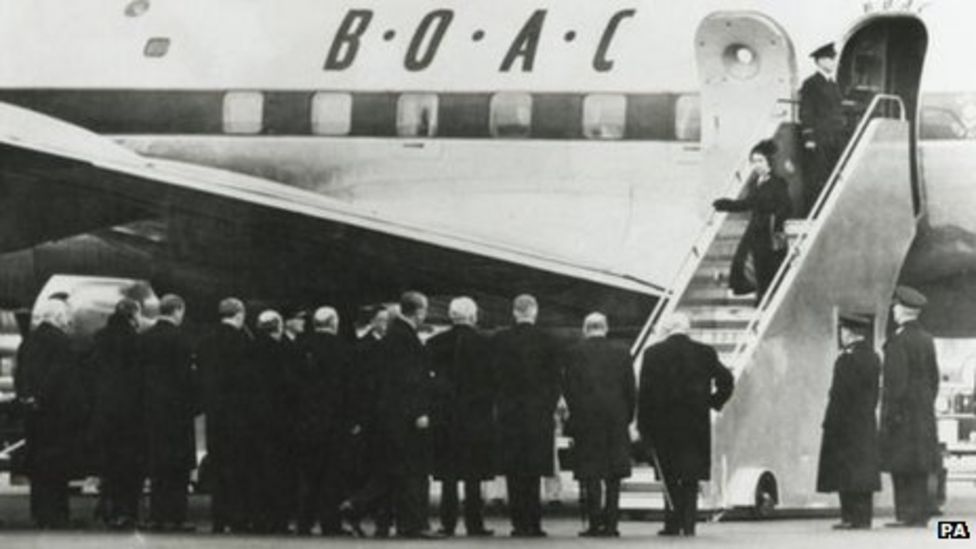 The trip that would change her life would take place in 1952, in what would be her first royal trip.

Elizabeth was not yet queen because her father, King George VI, was still on the throne. At the age of 25, the young Princess then began to represent her father on official trips and soon embarked on a tour that would pass through countries such as Australia, New Zealand and a passage through the African continent. For that occasion, the princess continued her journey on the Canadair North Star, at the time an “updated” variant of the Douglas DC-4, belonging to BOAC.

The aircraft registered G-ALHK and named “Atalanta” received some specific modifications to accommodate the royal entourage, such as the change of some lighter seats and also the installation of two beds in the cabin. At the beginning of February 1952, the aircraft left London Airport (now Heathrow) for Nairobi, where they would make the first stopover for refueling and rest. Having landed in Nairobi on the morning of February 1st, the plane was repositioned to Mombasa as it was not necessary to bring the royal couple back to London.

According to the calendar, the voyage was supposed to continue to Oceania aboard the ship SS Gothic, but was tragically canceled. It was in the middle of Kenya, on the morning of February 6th, as Princess Elizabeth and Prince Philip relaxed at the Treetops Hotel in Nyeri, where news broke that His Majesty King George VI had passed away in his sleep. The royal couple had to immediately return to London. 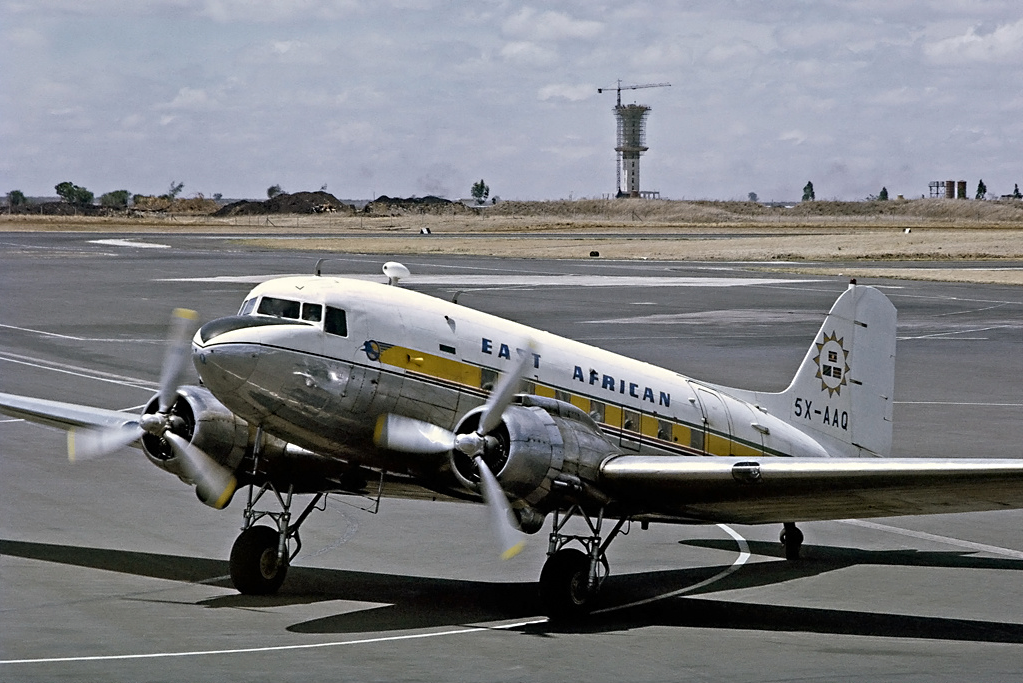 Due to the urgent need, an East African Airways Douglas DC-3 was deployed to transport the royal couple from Nanyuki (a town not far from Nyeri) to Uganda, where the Queen would now travel back to London.

In Uganda, BOAC’s Canadair North Star returned to the scene, which transported Princess Elizabeth and Prince Philip back to the United Kingdom. Naturally, after the death of her father, Elizabeth automatically became Queen Elizabeth II.

One of the first changes to the royal standard took place shortly after the inauguration of the new Queen. The change of the official name of the royal transport group to “The Queen’s Flight”, which previously in allusion to the king was called “The King’s Flight”.

In 1961, Queen Elizabeth visited Nepal for the first time, and for this trip two RAF Douglas Dakotas were temporarily added to the royal fleet: they were KN645 and KN452.

A new era. This Time As Queen Elizabeth II 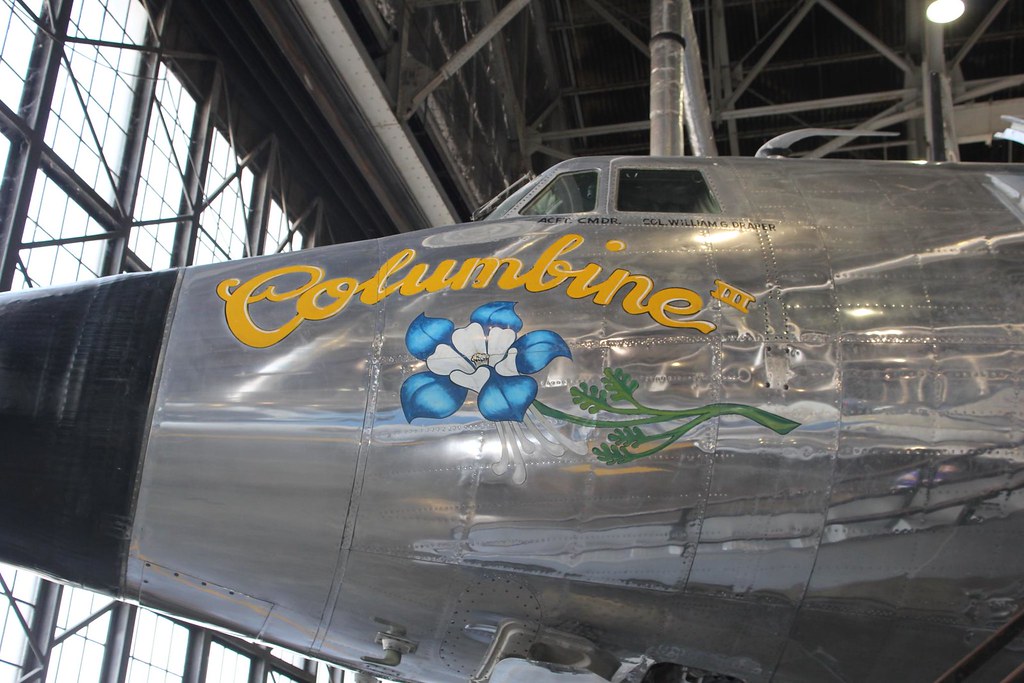 Two years later, in 1954, Elizabeth II continued her trip to Australia, now as Queen. On this second occasion, the Australian flag carrier, Qantas made a Boeing 707 and Lockheed Constellation available for the monarch to use in what would be her first visit to the country. With a differentiated and exclusive service, the airline became the Queen’s official carrier for her trips to Australia. 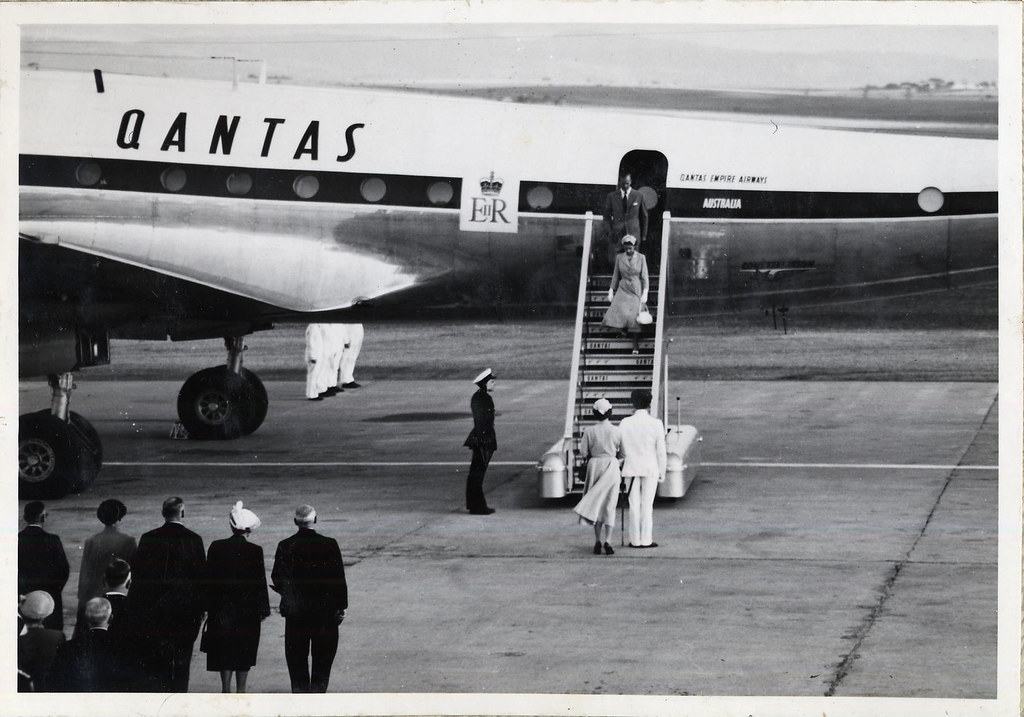 In 1957, Her Majesty made an official trip to the USA, not using, however, an official aircraft of her royal fleet. The trip started in Jamestown, Virginia, bound for Washington DC. The flight to Washington was operated by the “Columbine III”, the only Lockheed VC-121E ever built at the time. Columbine III was the US “Air Force One”, serving the presidential entourage and President Dwight Eisenhower himself until 1961. 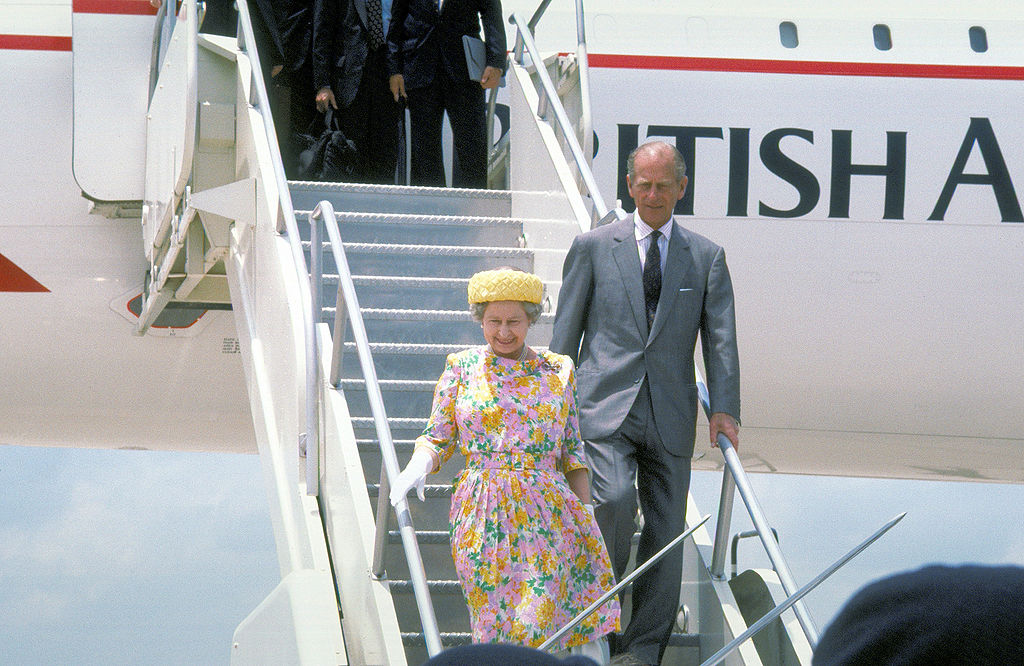 Technology flourished and the discoveries and advances made in the field of aeronautics were gigantic. After some time, the Queen would have the privilege of flying in one of the most iconic aircraft in the entire history of aviation: the mighty Concorde, which was partially conceived in the UK. Queen Elizabeth II would fly on the then-new British Airways Concorde a number of times.

On the occasion of her Silver Jubilee celebrations, the Queen flew to Barbados. In addition to being the monarch’s first supersonic flight, it was also the first Concorde flight in Barbados, at the time a British territory in the Caribbean. The aircraft used in the royal flight was G-BOAE, at the time, only three months old.

The Queen preferred the Concorde for some years on her official trips, having used it on other trips to Barbados in 1983 and 1987, and on her trip to Kuwait in 1979. On trips to the Middle East in 1984 and to the USA in 1991, the monarch also used the iconic jet.

In 1986, three new British Aerospace BAe 146 aircraft were added to the “Queen’s Flight”. As they were smaller aircraft, the British-built BAe 146s were used on domestic flights or on shorter flights within Europe. All had the royal setup, with a cabin uniquely made and dedicated for royal transport. 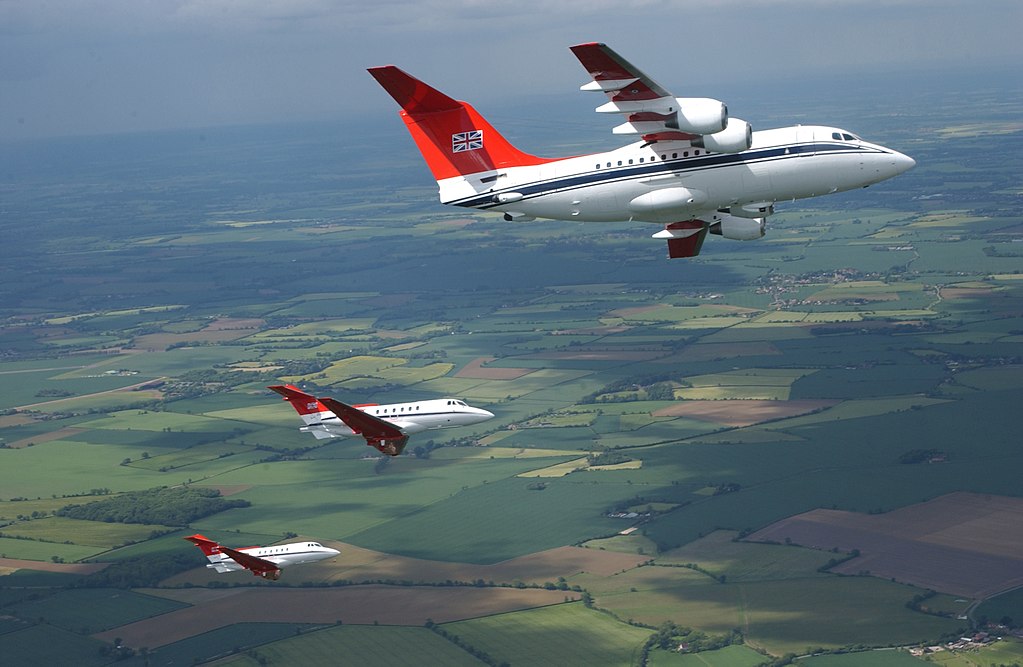 In the 1990s, Qantas, as a royal airline on the Queen’s trips to Australia, again transported the British monarch, but this time with the new, modern, and iconic Boeing 747-400. The trip took place on February 18th, 1992.

In 1995, on the occasion of a new international trip, the Queen of the United Kingdom flew commercial flights again, refusing the luxury of her official royal fleet. This time Air New Zealand was chosen to transport her, and choosing (again) a Boeing 747. The trip included a stopover in Los Angeles before arriving in Auckland.

During the flight, Queen Elizabeth II had First Class at her full disposal, in addition to three flight attendants dedicated exclusively to her. In Business Class were 26 employees of the royal family, and interestingly the other 384 seats in Economy Class were occupied by paying passengers.

As it was a regular flight, which turned out to be royal, passengers on flight NZ1 would need to go through an even more critical security review. In addition, they were also presented with a special souvenir pen for this trip. 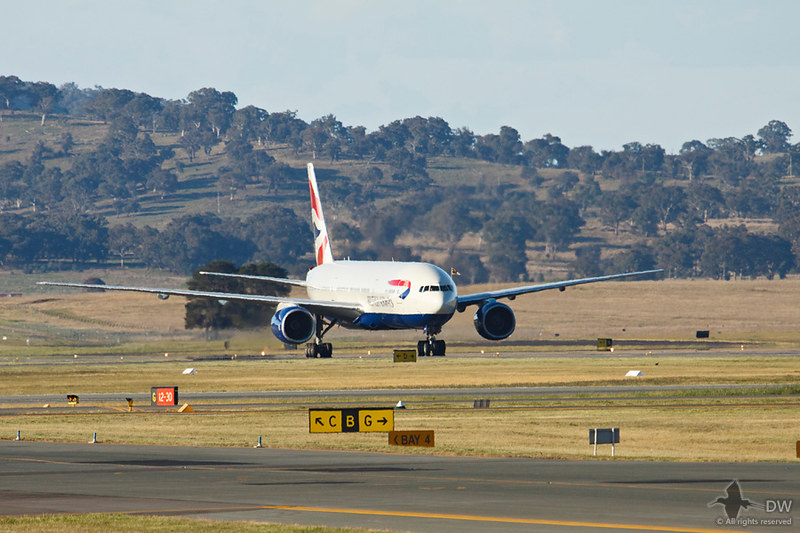 On her last international trips, Queen Elizabeth II would fly with British Airways in the hitherto new Boeing 777-200ER. On March 12, 2006, the Monarch was on her way to Canberra and Melbourne, Australia to celebrate the Commonwealth Games. The aircraft scheduled was G-YMMO, which also made a stopover in Singapore. Five days later, on March 17th, the same aircraft took the Queen back to London.

In October 2011, a new trip took place on the Boeing 777-200ER. This time G-YYMP was the one which transported the Queen and the royal family. The British Airways aircraft made Elizabeth II’s last royal voyage to Australia. The trip itself was also a milestone for the airline, which for the first time made the direct route between London and Perth.

The world and the United Kingdom knew of the death of Her Majesty Queen Elizabeth II on the afternoon of September 8, 2022, when all the world’s attention was already focused on Balmoral Castle. Five days later, following a demanding protocol schedule, on September 13th, the Queen’s coffin was transported from St. Giles’ Cathedral to Edinburgh Airport.

Upon arrival at the airport, members of the Royal Air Force carrier group carried the Queen’s coffin onto the transport aircraft and were accompanied by an honor guard from the Royal Regiment of Scotland.

As the aircraft began to taxi for takeoff, the Honor Guard gave a final royal salute, with the regimental band playing a verse of the British national anthem. The Queen’s body flew one last time in a Royal Air Force Boeing C-17A Globemaster III, registration ZZ177, with flight code KRF01R between Edinburgh and Northolt in the company of her daughter Princess Anne.

This concludes a reign of 70 years, 7 months, and 1 day. The longest by a sovereign in British history.

Using the words of Paddington Bear to express the grief feeling of the British people: “Thank you, Ma’am, for everything.”

Thankyou Matt for the lookback of our dearly departed Queen and the aircraft she used,

Did anyone notice the registration ZZ177 upside down reads LLIZZ was this done purposely or just coincidence..
Enjoy reading your articles.
Thank you.