At this unusual time, there are more freighters flying in our skies than passenger airlines thanks to the global impact of coronavirus on worldwide air travel and the need for logistics specialists to transport essential goods.

One airline being made good use of is Antonov Airlines.

This Ukrainian freight carrier is known the world over thanks to it being the only operator of the world’s largest aircraft – the Antonov An-225 MRIYA.

But the airline is about so much more than that.

Based at Hostomel Airport near Kiev, the Ukrainian capital, it is actually a division of the Antonov manufacturer, which has produced aircraft since the Soviet era.

Antonov Airlines was established in 1989. Since 2006 it has operated as a joint-venture with Russian carrier Volga-Dnepr Airlines.

The carrier is a specialist in outsized cargo and usually operates charter work in the cargo market, transporting unusually large or heavy payloads in all corners of the globe.

Because of this sometimes sporadic work, sometimes its fleet (especially the An-225) can remain on the ground for extended periods of weeks or months.

The fleet of Antonov Airlines / Volga-Dnepr is comprised entirely of Antonov aircraft. They include:

Additional aircraft are operated on behalf of the Antonov Design Bureau.

The huge cargo capabilities of the An-225. Image (c) Antonov Airlines

This unique aircraft is known among enthusiasts (and to some degree the general public) the world over.

It is the only example completed and in service.

Usually, whenever it moves it becomes the topic of conversation among those desperate to see it land. Airports where it arrives at usually become clogged with enthusiasts desperate for a glimpse or a photograph.

This aircraft has six engines slung from its high wings. It has a huge maximum payload of 250,000kg (250 tonnes). You can read more about its capabilities here: https://www.antonov-airlines.com/our-fleet/an-225

Here’s a video of it departing Anchorage in May 2020.

Sadly because it operates very specific roles usually carrying very heavy equipment, it’s impossible to predict where to see the An-225 apart from at its home base near Kiev.

One trick, however, is to put its registration (UR-82060) into FlightRadar24 and see if it is currently flying, or where it last landed at. Here’s a quick link: https://www.flightradar24.com/data/aircraft/ur-82060

Other notable aircraft in Antonov Airlines’s fleet include the An-22A. This is the world’s largest propeller-driven aircraft and also garners a lot of attention from aviation enthusiasts when it is spotted moving about the globe.

It can operate from smaller, unprepared airstrips, so is perfect for flying into developing countries. 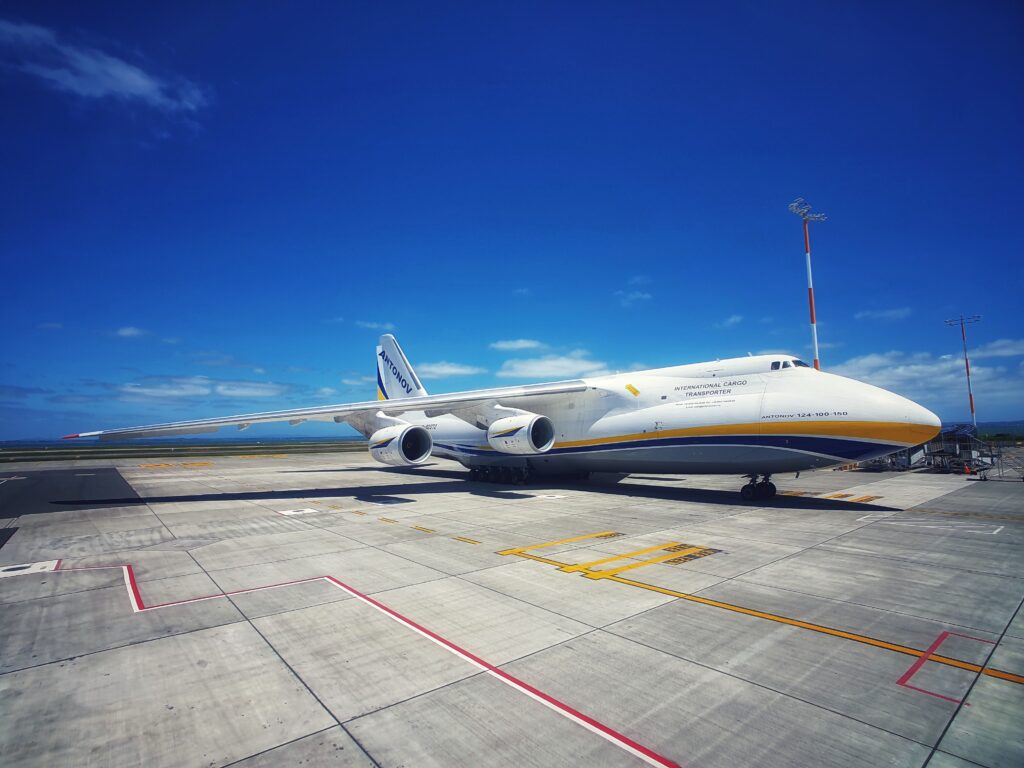 The An-124 is also a significant member of Antonov Airlines’ fleet. It makes up the largest part of the fleet, and is the workhorse of their operations.

With so many cargo airlines working hard during the current crisis, Antonov Airlines is playing a huge part by demonstrating its capabilities and fleet of versatile aircraft.

They make an incredible sight (and sound) when flying, and a welcome change from the usual freighters we see on cargo flights.

Is the Mitsubishi SpaceJet in touble?

We have AN 124s regularly at Perth, so always good to see them. When I was a duty airport manager, I would have to go up to the flight deck to see the captain for landing fees payment, so another amazing flight deck. to explore.