Arguably Britain’s most successful airliner, the Vickers Viscount heralded turboprop air travel in a world where airlines were still stuck in the piston era.

Designed in the 1940s, it first flew in July 1948, and entered service in April 1953 with British European Airways.

The turboprop at this stage had not been used on an airliner, and arrived at the same time as Britain was also developing the jet engine for air travel, used in the de Havilland Comet.

The Viscount was designed to offer short haul and regional air travel in comfort and style, with reduced noise and vibrations compared to previous airliners. This was a major attraction to airlines who wanted to offer their passengers something a little bit more than their competitors.

The prototype Viscount was the 600 model. It was smaller than the production variant. One of these prototypes flew with jet engines as a proposed future development!

The Type 700 was the first production variant. It is identifiable by having circular passenger doors.

The Type 800 was the final variant of the Viscount. It was 1.2m longer than the 700, with greater passenger capacity and range. It had square passenger doors.

British Midland and the Viscount 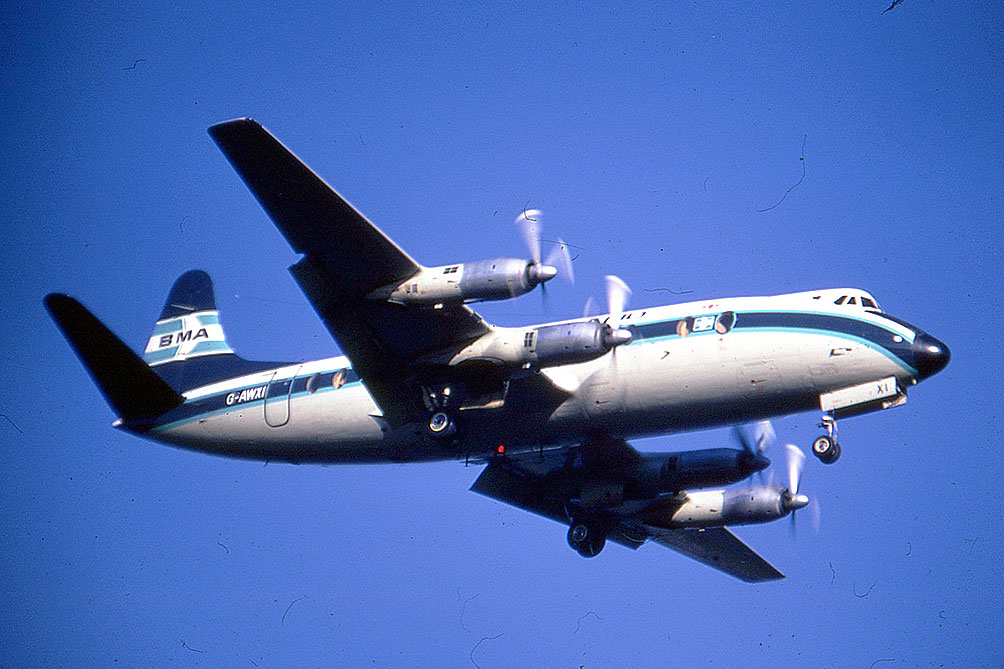 British Midland Airways was established in 1938 as Air Schools Limited.

It later changed its name to Derby Airways in 1959 and began offering flights from airports like Derby, Wolverhampton and Birmingham to destinations in the UK and Europe.

On 1 October 1964 the airline changed its name to British Midland Airways (BMA) when it bought Mercury Airlines.

It was an airline familiar to many through its growth into one of the major air carriers in Britain. Its fleet of jet and turboprop aircraft would be seen all over Europe and the UK as a major rival to British Airways, particularly at its London Heathrow hub.

British Midland introduced the Vickers Viscount in January 1967 and would have a long relationship with the type right until the last example was retired in 1988.

The Viscount was acquired to help the airline on its regional services, particularly on domestic routes in the UK. They would continue to operate alongside more modern jet types to the end.

In all, British Midland operated 29 different Viscount aircraft – both 700 and 800 variants. They flew alongside other turboprop types like the Handley Page Herald, and the Fokker F27.

Later, as the airline grew, more modern turboprops like the BAe ATP, and jet types like the Douglas DC-9 and Boeing 737 took over the services of the Viscount. 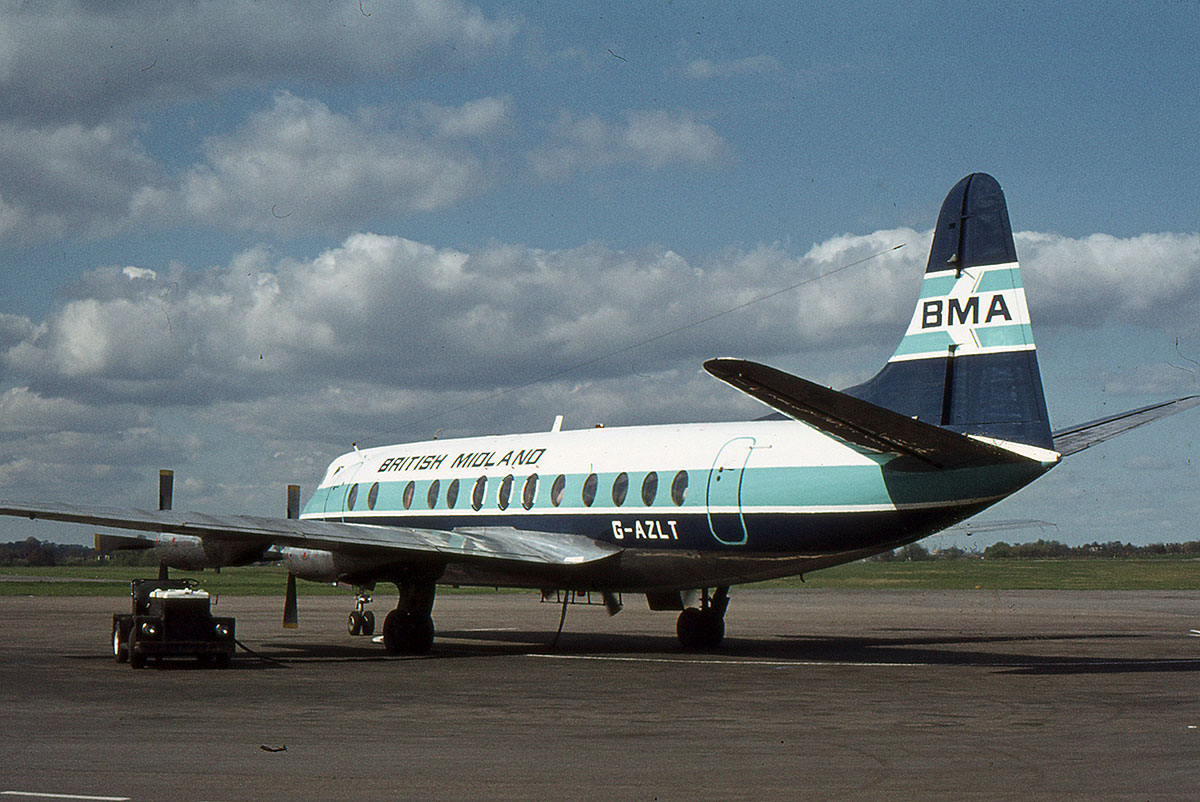 Here’s a list of every Vickers Viscount British Midland operated:

Interestingly, British Midland didn’t operate any Viscount aircraft from new. All were acquired second hand from other carriers, and some only operated for a short time on lease.

During the period of time in which British Midland flew Vickers Viscount aircraft, the airline went through a number of liveries, as seen here. 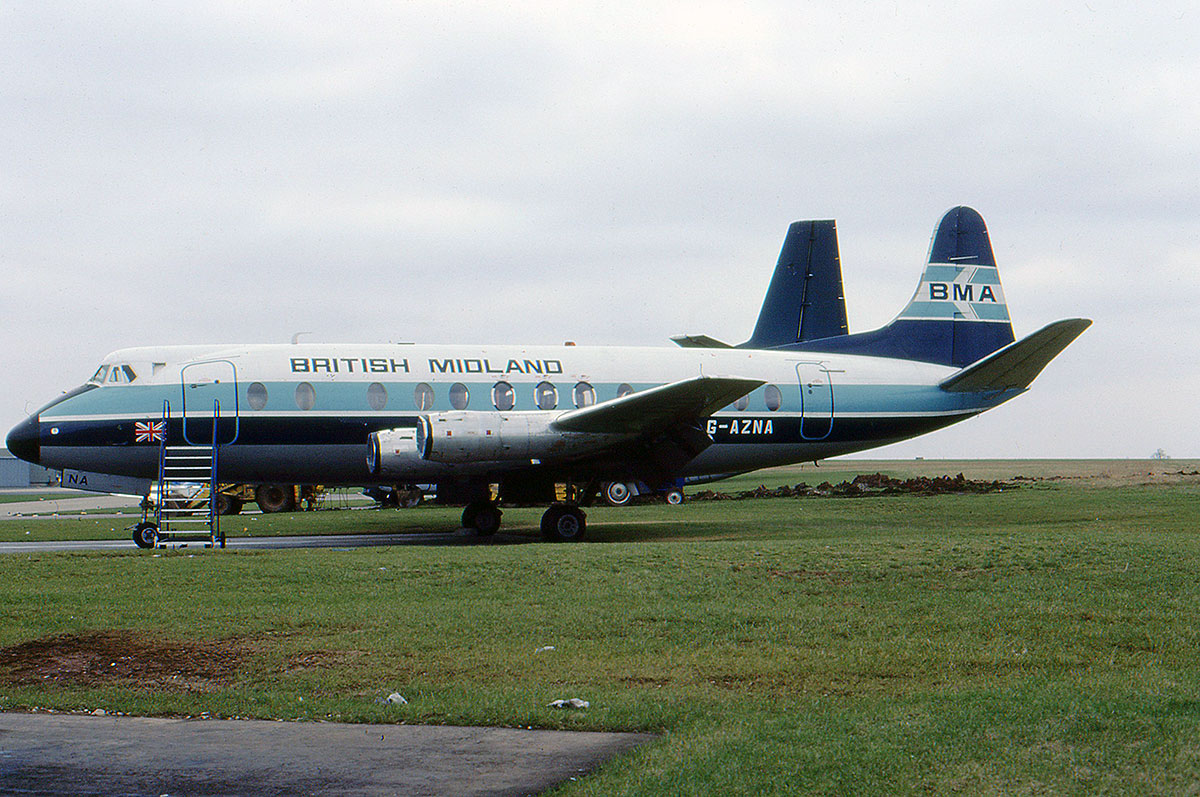 The Viscount aircraft were painted in the livery of the time, depending on the period in which they flew for the airline. 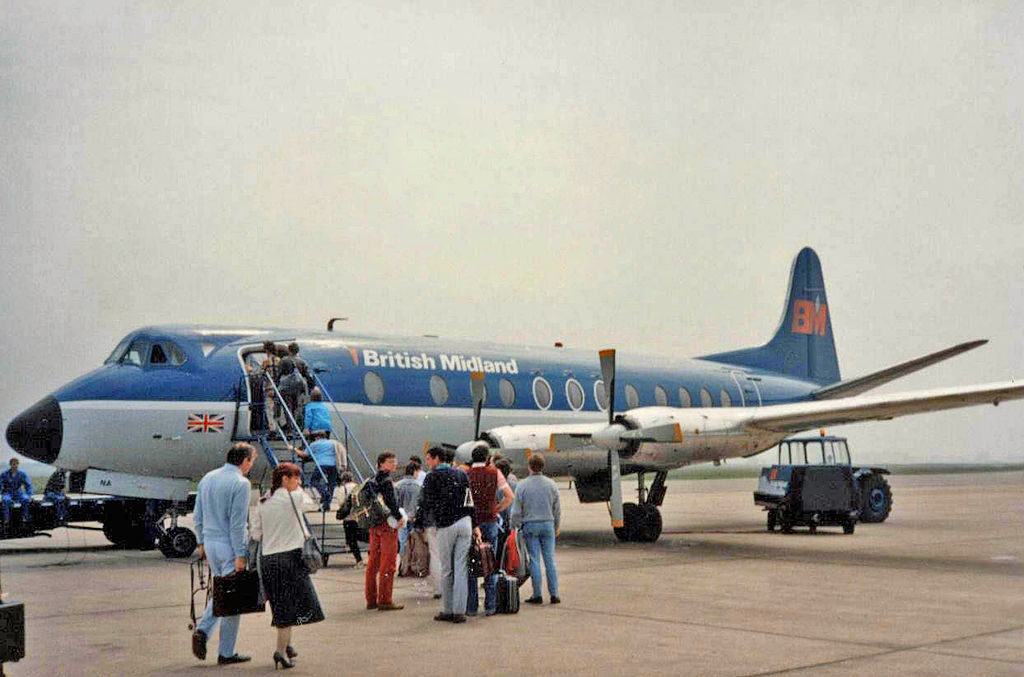 Only one Viscount flew in the later ‘Diamond’ British Midland livery from the late 1980s. This was G-AZNA. 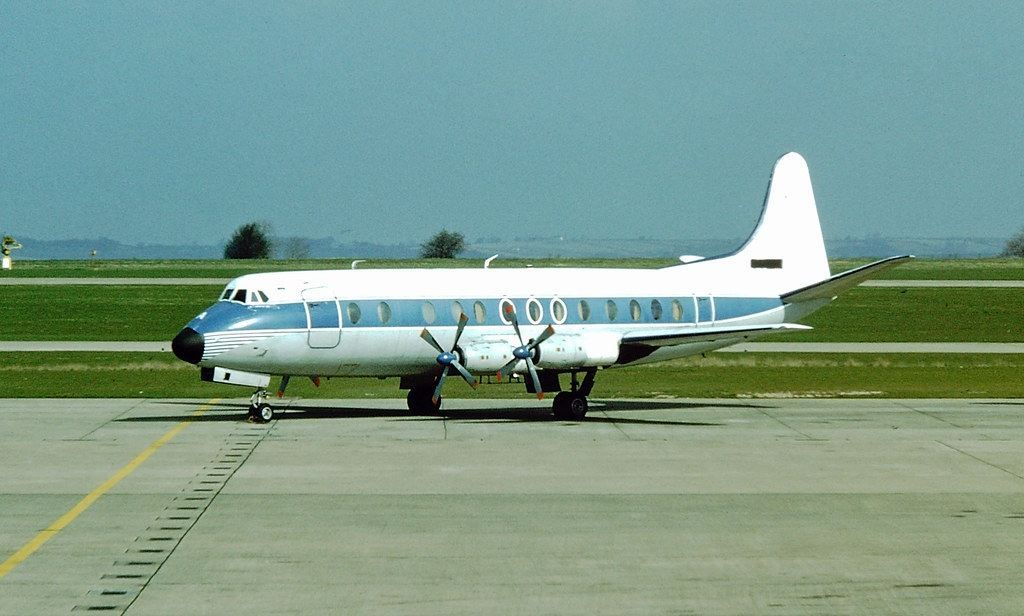 As many of the Viscount fleet were leased in to operate for shorter period, it was normal to see them flying in the liveries of their owner or previous airlines, with blanked out logos and British Midland titles.

On 20 February 1969, Viscount G-AODG suffered a heavy landing in snow and fog at East Midlands Airport, resulting in the landing gear collapsing and the fuselage splitting in two. There were no injuries, but the aircraft was written off.

A month later, on 20 March 1969, Viscount G-AVJA was lost on takeoff from Manchester Airport. This was a training flight with four crew and two cabin attendants on board. The aircraft rolled and crashed into the ground not long after lifting into the air after engine number four was feathered, causing a loss of control. Only one person survived.

Various Viscount aircraft which were flown by British Midland Airways survive in different conditions around the world. These are the known Viscount survivors:

G-AWXI (cn 339), survives as a cockpit submerged in a lake at the National Dive Centre, Stoney Cove, Leicestershire, UK (a hard one to see!). 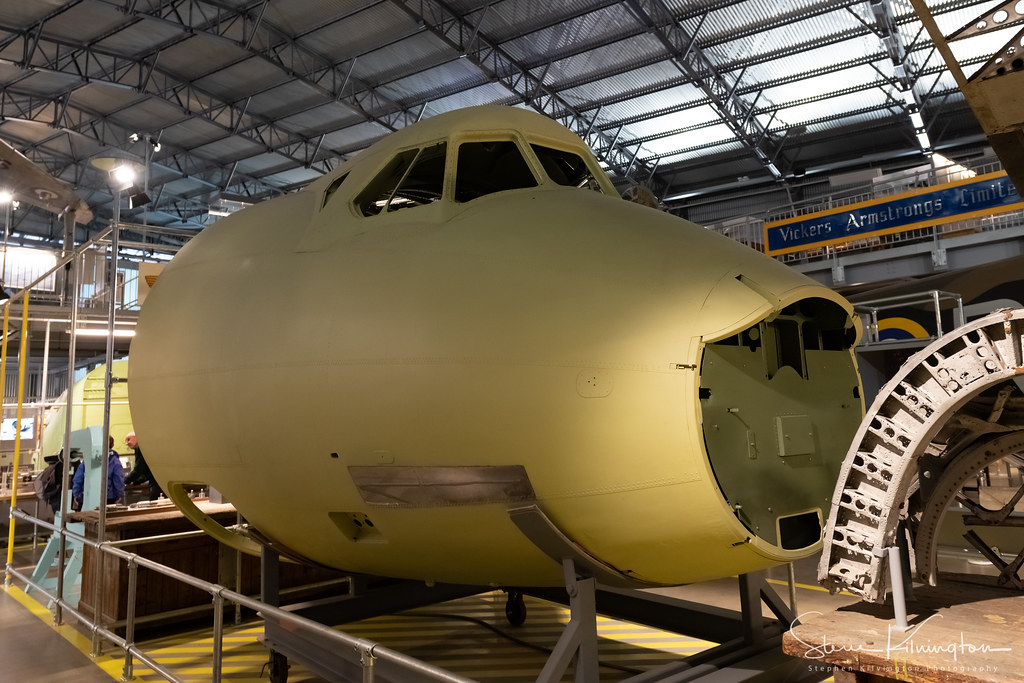 G-AZLP (cn 346), survives as a forward fuselage at the Brooklands Museum, Weybridge, UK. This aircraft was previously used as a training airframe and then passed around a few museums. It is now back at the place it was built! 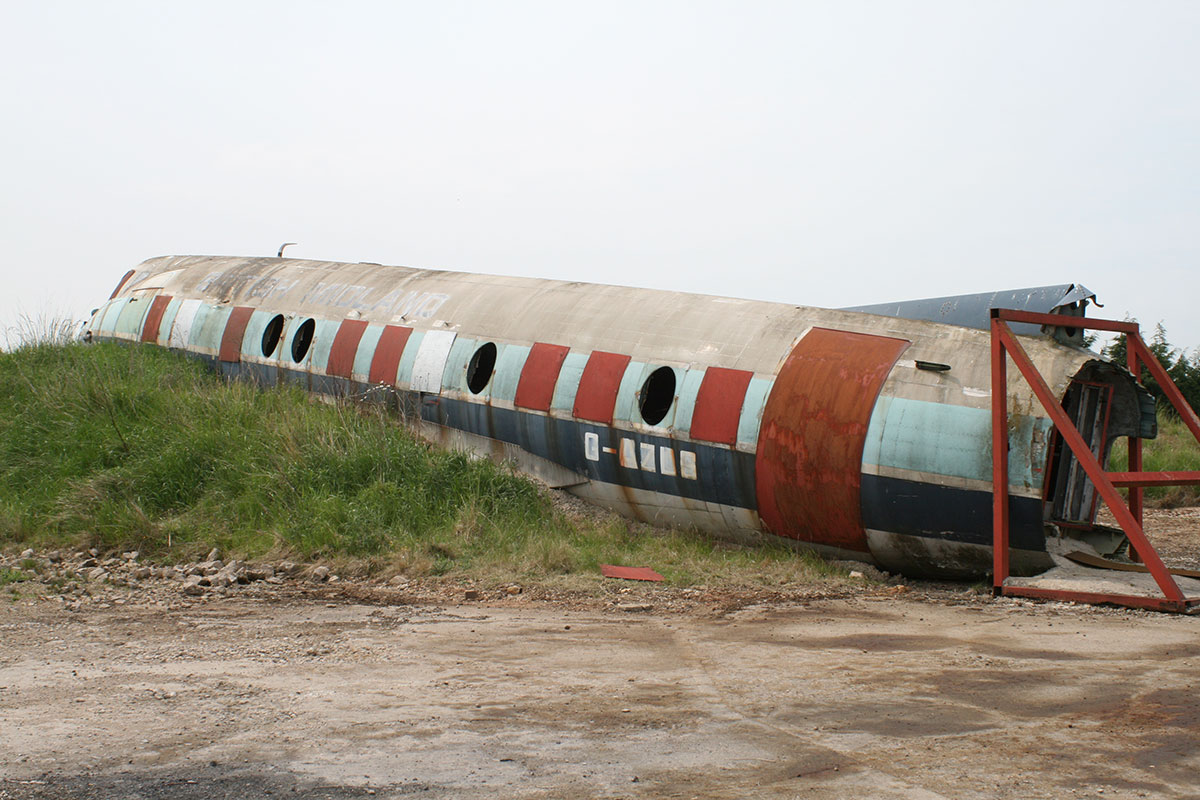 G-AZLS in use as a fire trainer at Teesside.

G-AZNA (cn 350), survives mounted on poles outside a nightclub at Waarschoot, Belgium, near Ghent.

G-BFZL (cn 435), survives at Bondo Airstrip in the Democratic Republic of Congo.

Thanks to the Vickers Viscount Network for this information. 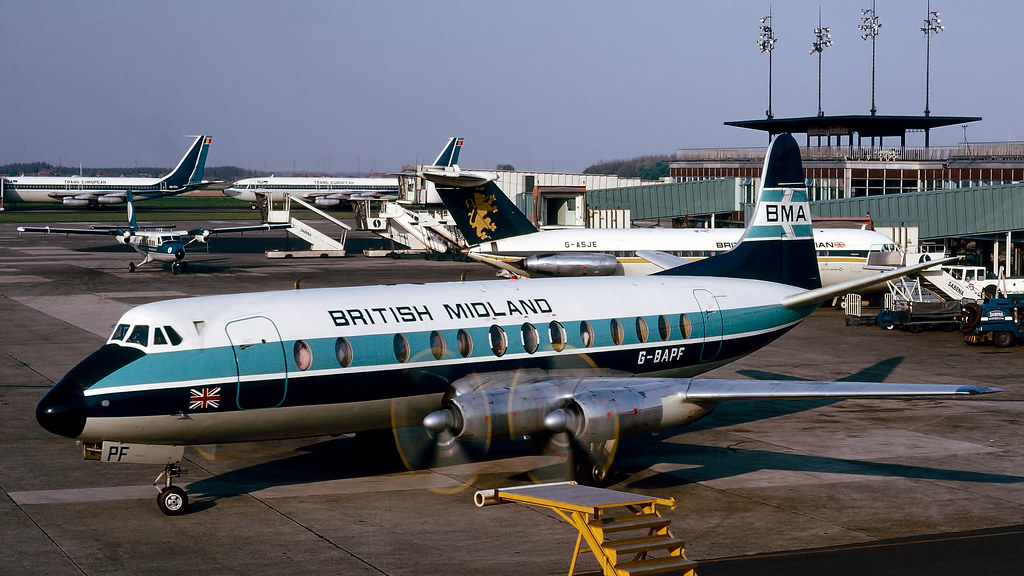 Sadly there are no Vickers Viscounts still flying, with the last examples in Africa being grounded in the late 1990s.

Did you ever fly on a British Midland Viscount? Let us know in the comments below!

Find out more about the Vickers Viscount and its different variants in Flying Firsts – a month-by-month guides to airliner first flights, with histories, facts, statistics and colour photographs of all airliner types and variants. It’s an amazing airliner reference book for the aviation enthusiast!

Interesting article. I did travel on an Indian Airlines Viscount on Poona Bombay sector in 1967. It was indeed short and smooth ride

Great article thanks very much. I travelled on many BEA viscount flights and an occasional BKS flight in the late 1950s, the 60s, 70s and even on a Manx Airlines flight from Heathrow to Leeds Bradford in 1983. The early flights were usually cheap midweek late night holiday flights to Gibraltar, Mallorca or to Malta….so exciting to fly in. Indeed, the only time I ever flew in the daylight was to Manchester or to Leeds/Bradford or maybe to Tangiers by Gibair!!!
The massive windows affording panoramic views, the smooth ride way above the weather and a visit to the cockpit naturally!! As a child I always wanted the window seat preferably where I could see the propellers!!!
And then came the vanguard and comet 4B…….oh those were the days!!!!

My first flight was on a viscount from LHR-GCI in 1968. There are more preserved in the UK, G-APIM at Brooklands, G-ALWF at Duxford, G-AMOG in store in Scotland and the Air Inter one at Coventry plus Cockpits from the A&AEE VIscounts. In Italy, an Alitalia one I-LIRG is preserved at a Rome technical school whilst Germany has Die Silber Vogel restaurant in Hanover and a complete one D-ANAM at Hermeskiel museum and another Air Inter one at Sinsheim. In France an Air Inter 700 series can be seem at Mervilles-Colonnes technical school.

Thanks Steve. Yes the excellent Viscker Viscount Network covers all the preserved and remaining Viscounts around the world. Thankfully quite a few still remain. This article just covers surviving Viscounts that flew for British Midland.

I flew on BMA Viscounts from Southend to Jersey and return in September 1982. I will check my old logbook later and should be able to find the registrations of planes I flew on.

Hi Matt, loved the Viscount and over the years 1968-1976 flew on WGV; PND; SED; ZNC; ZLR; and ZLT.
At Belfast airport I would have done dozens of BMA Viscount loadsheets, and still have a few copies.
Fortunate to have had a few jumpseat trips in them as well, great aeroplane indeed.
Thanks for the great photos too.

Thanks for such an interesting article. I had the pleasure of several viscount flights with British Midland in the 70’s and 80’s, including a jumpseat flight to GLA from EMA on’ ZLT, and numerous hops to Jersey, Paris, and to Heathrow, to connect with an early dc9 trip to MME,(still on American register an N 65358, named Dovedale, after its previous name of Topkapi, I believe). The picture windows in the viscount were great, and they always gave a smooth ride-perhaps just lucky with the weather! Several other enjoyable experiences with BMA include the F27, sh330, ATP, 737s and A319/20/21. Shame they don’t still exist in their stand alone identity, but good to see several members of the fleet doing good service for BA.

Was on the last BMA flight. East Midlands to Bournemouth, where the Viscount was built. A ceremony was held to commemorate the flight. The factory staff lined the runway and a full power, very steep take-off made. On arrival at EMA a fast pass was made at 400 mph before landing. I loved the Viscount, have flown in several. Quiet, smooth, big windows. Smashing!