Remember when you had no idea which aircraft were flying overhead, or what you’d see at an airport when you went plane spotting?

Today, thanks to the internet and smartphone technology, we can accurately identify aircraft that are mere dots and trails in the sky, or look at which aircraft are currently on the ground at or approaching airports anywhere in the world.

The advent of flight tracking websites and apps have changed the world of plane spotting. I think most of us these days have heard of FlightRadar24, but which other flight trackers are there and which is the best?

What are flight trackers?

Flight tracking websites and apps show you the aircraft currently flying overhead – or anywhere in the world for that matter.

They can be viewed on your computer, tablet or smartphone and just require access to the internet or mobile data, meaning you can spot planes anywhere in the world, and far away from the actual aircraft.

It is useful for identifying aircraft trails high overhead, or planes you see on approach to your local airport. You can even use them as an alternative to needing binoculars when plane spotting, however, they eyeball is always the most accurate and sometimes incorrect information can be shown (very rare).

What do flight tracking websites show? 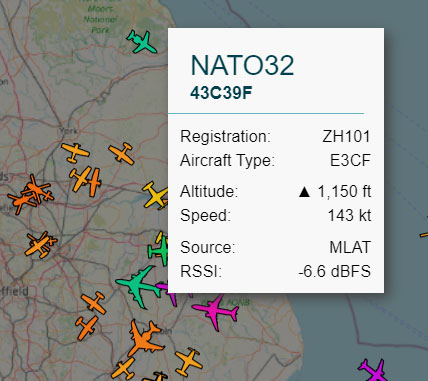 They display a map with aircraft icons on them, and often accompany that with information such as the aircraft type, flight number, airline, altitude, speed, origin and destination.

Most flight tracking websites and apps will primarily show airliners, as these are the aircraft which are all equipped and transmitting position data.

What do they not show?

Often you will find that light aircraft, biz jets and military aircraft do not appear as these are either not (yet) required to transmit this information, or block it for security reasons.

What do they cost to use?

The good news is that I think all of the flight tracking websites and apps are free to use in their basic form.

Most will have some kind of subscription service, which gives you more functionality and information.

Some may also charge you to download the app.

Those which require specialist equipment, such as a SBS-1 unit, also have the cost of the equipment to consider.

To use a flight tracking website, it’s often as simple as entering their URL (web address) and then enjoying the radar data it shows. You can drag the screen around and click on aircraft to find out the information.

If you want to use the flight tracker on your tablet or smartphone, you can download the specific app from the app store you use (eg Google Play or the Apple App Store).

You also have the option of viewing the tracking website on your phone using its internet browser (useful for the trackers that don’t have their own app).

Which flight tracking websites and apps are available?

The most famous flight tracking app and website. It has loads of great features, lets you customise your view and has a lot of information available on aircraft, their flight history, as well as airlines. It can show you which aircraft are currently on the ground at airports, as well as expected arrivals and departures.

FlightRadar24, like many, will not show much in the way of military or general aviation traffic, so it has its limitations.

There are various subscription plans available, each offering slightly more functionality and features.

Like FlightRadar24, Plane Finder is one of the original and best known flight tracking websites and apps. It has millions of global users and is easy to use, with lots of data.

Again, it doesn’t show all the military and light aircraft, but does have a lot of useful information on the aircraft it does show.

Free to use, but with a Premium option which adds more data and removes adverts.

This has recently become one of my favourite trackers. It is only available on the web and doesn’t have its own app, but it seems to show so many more aircraft. I’m easily able to track military tankers, fast jets, biz jets and many light aircraft, which is really useful where I live.

Like ADS-B Exchange, Freedar also shows many GA, biz jets and military aircraft. However, coverage doesn’t seem to be as extensive.

It claims to be the world’s most popular flight tracker and, as the name suggests, it’s completely free to use. It is available on the web and on dedicated apps.

Another free tracking website (it doesn’t have an app), Plane Mapper is nicely presented if a little basic. It shows all the commercial aircraft, but few smaller or military types.

One of the well known flight tracking websites, run by AirNav and also with a wealth of other features and information on the aircraft and airports it shows.

You will see plenty of military and light aircraft displayed, which is really useful.

Free to use, but upgrading gives you access to their apps, and much more information which is part of their offering.

Others Worth Checking Out:

Which flight tracking website or app do you use? Tell us in the comments below, and let us know why you prefer it.

Been using freedar since it first started, can’t find anything that does worldwide military as good, as for UK and Europe I use 360radar, yet again since it first launched best for that.
As for rest nothing beats those two.

I use Freedar mainly, good coverage in the UK including military and biz although it does have some large gaps where it doesn’t show much such as Greece where I travel to regularly. FR24 has a great playback feature which I use for identifying contrails I see when travelling. It has the best coverage across Europe too. I also use Plane Plotter mobile on my phone which I have set to only display needed frames but this too has almost non existent coverage throughout Greece.

Saying aircraft are shown on the ground is misleading. Only those which are using their transponders will show, all parked and cold aircraft will not. You have to wait for them to start up.

Yes, perhaps I should clarify that. Flightradar24 paid subscriptions has a list of aircraft currently on the ground at each airport. It doesn’t show them on the map, but it’s useful to see what has landed and is still (apparently) there.

I use FlightRadar24 almost exclusively for spotting, but use FlightAware for individual flights. FlightAware shows the pilot’s filed route, which I can input into my Garmin Aera to follow along while flying as a passenger. I can usually tell within about 5 seconds when the plane will turn, and know when the pilot chooses to deviate for weather, etc.

Dear Sir/Madam;
i hereby tell you that.one of the best ,the most informative,the expressive website i’ve seen,is yours
thank you.
Your’s Sicerely;
Aria Azadandish

Hi Matt, ADSBexchange doesn’t have an app officially but there is an app that uses its data and is basically the same thing. It is called OpenADSB, it’s on the App Store for about USD$8 I think

Check Out Skyscanworld Aswell… We’re new to the game. Worldwide coverage of both civil and military.

I’ve been using Skyscanworld lately and have found it’s far superior to freedar unfortunately it’s not free but you get what you pay for or not.

There should be a part two to this article about how to set up a feeder for these apps in exchange for their business subscription. Cost me about £75 in materials and I feed to 4 of these sites. Surprisingly easy too.

In th UK, every receiver that feeds data into these sites are all in breach of Section 48 of the Wireless Telegraphy Act. Does every person with one of these receivers realise they are commiting a criminal offence? I doubt it.

RICHARD TAYLOR claiming skyscam is better then freedar. Of course a skyscam staff member would say that because they don’t even come close your comment is very misleading very misleading indeed.

The best trackers out there are
1.360radar
2.flightradar24
3.freedar
4.adsb-exchange
No others come close,

No mention of PlanePlotter
Software only & free if you feed from your own SBS, Dongle whatever
The most customisable app out there with ability to track far more than anything else in it’s various modes