In Part 1 I travelled from home to Trondheim in northern Norway, by way of a Norwegian Air Shuttle flight from Manchester.

In Part 2 I took two domestic flights within Norway on Wideroe’s DHC-8 fleet, from Trondheim to Bergen, and Bergen to Oslo.

In Part 3 I spent the day around Oslo Gardermoen, visiting the Norwegian Armed Forces Aircraft Collection and spotting from various points around the airport.

Now, after another night in the Comfort RunWay Hotel at Oslo Gardermoen, it was time to head back to the UK

The alarm went off at the unwelcome time of 6am, and it was still dark outside.

I managed to drag myself up and get ready in time to have some breakfast in the hotel, before checking out and walking to the nearby bus stop to catch the #400 bus to the terminal at Oslo Gardermoen.

While the hotel shuttle stops at the door, it is twice the price as the local bus but essentially travels along the same route. 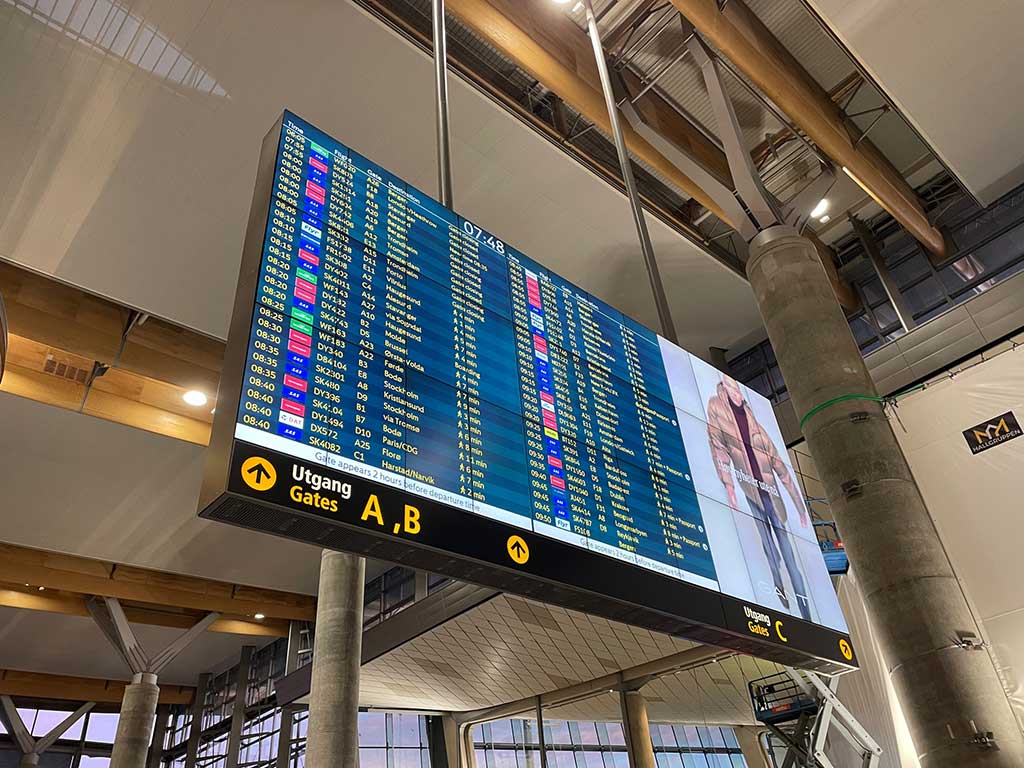 I was flying this morning to London Gatwick on Norse Atlantic and their 787. This is a great way to try the Dreamliner on a short-haul European flight, and was incredible cheap at just £35 for the one way flight, including checked baggage!

I had tried to check in online, but the app wouldn’t show me my boarding pass, so I went to the counter. I also paid £9 to choose a seat since the free choice was a middle seat and I could only pay to get a window.

Once through security I headed to the international section. The ‘Go to Gate’ message was already flashing even though it was an hour till departure. So I sat in the gate area with a view of the runway, waiting to board.

You can watch the trip in this video, or read on for the full report…

The flight was on Boeing 787-9 LN-FNC which, like all of the Norse Atlantic fleet, used to fly for Norwegian on long haul services. This one was previously G-CKWE based at Gatwick. The cabin still felt surprisingly new. 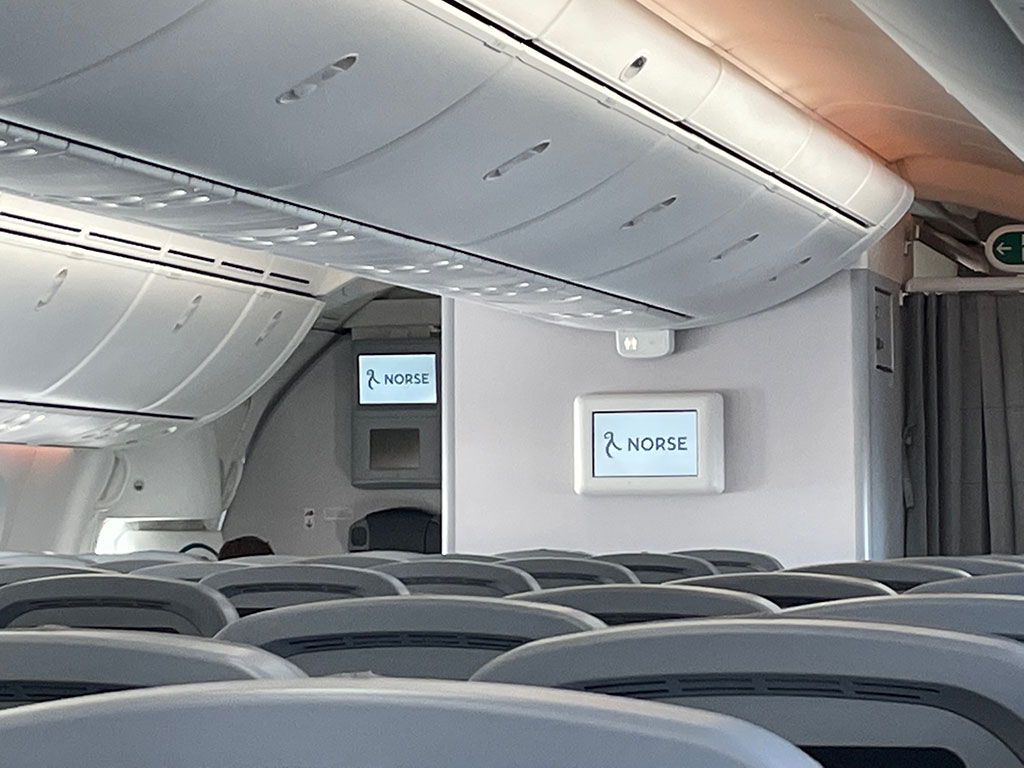 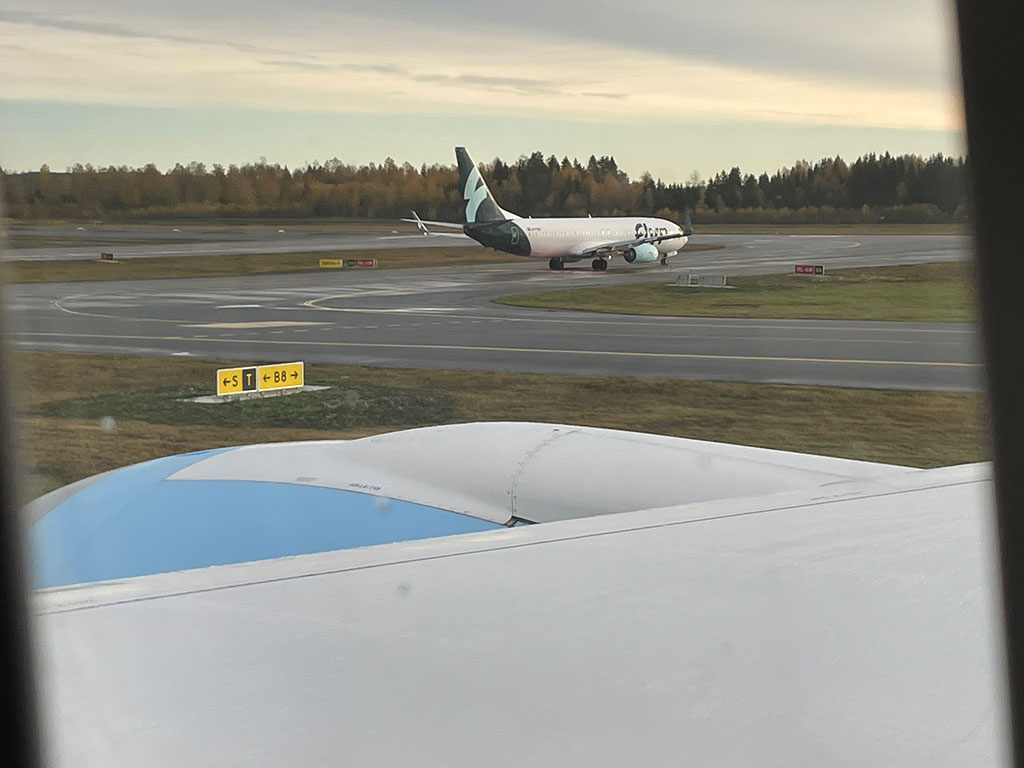 We taxied out on time at 9.30am for a swift and sprightly departure off runway 19R, passing over Oslo city a short while after.

The flight took over two hours thanks to a 180kph headwind! But it was very comfortable on board, with the flight around half-full of passengers.

Passengers don’t get any free food or drinks on this flight. But there was a pay-for onboard service, and passengers enjoy seatback entertainment screens (and a good view of the 787’s wing). 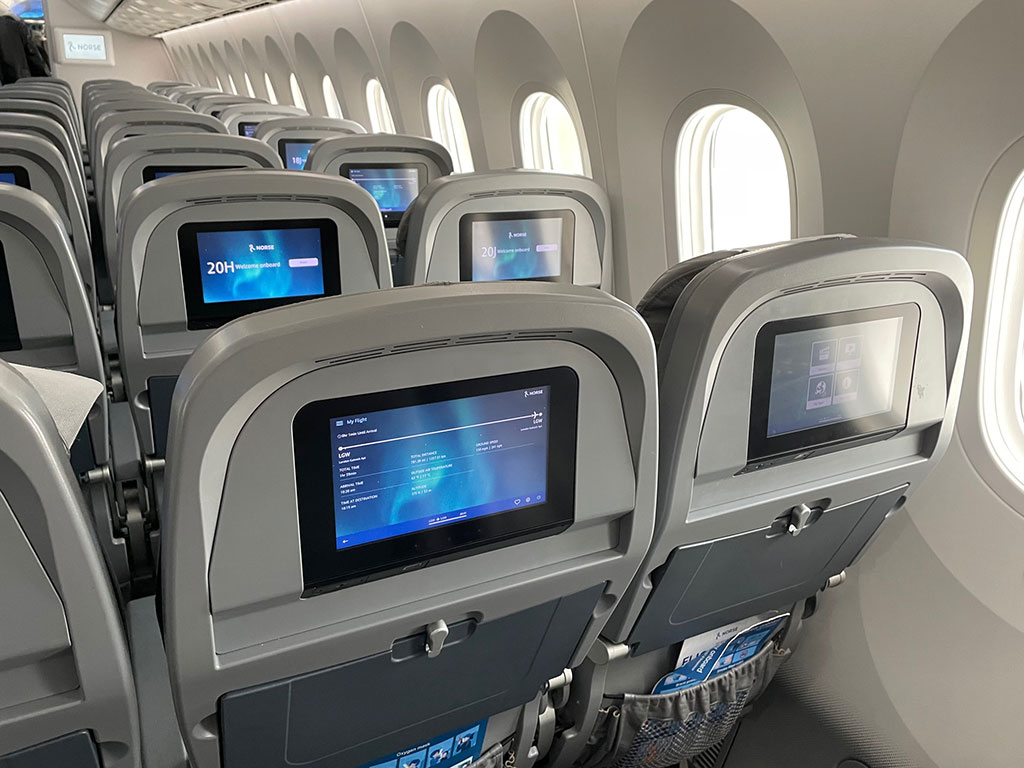 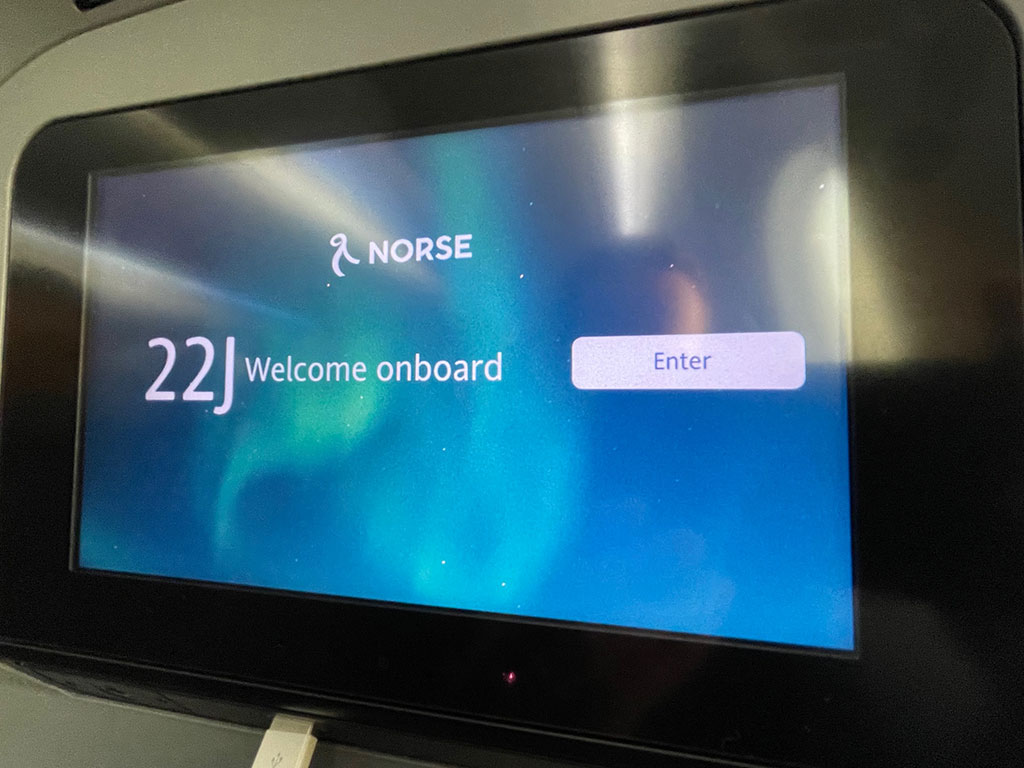 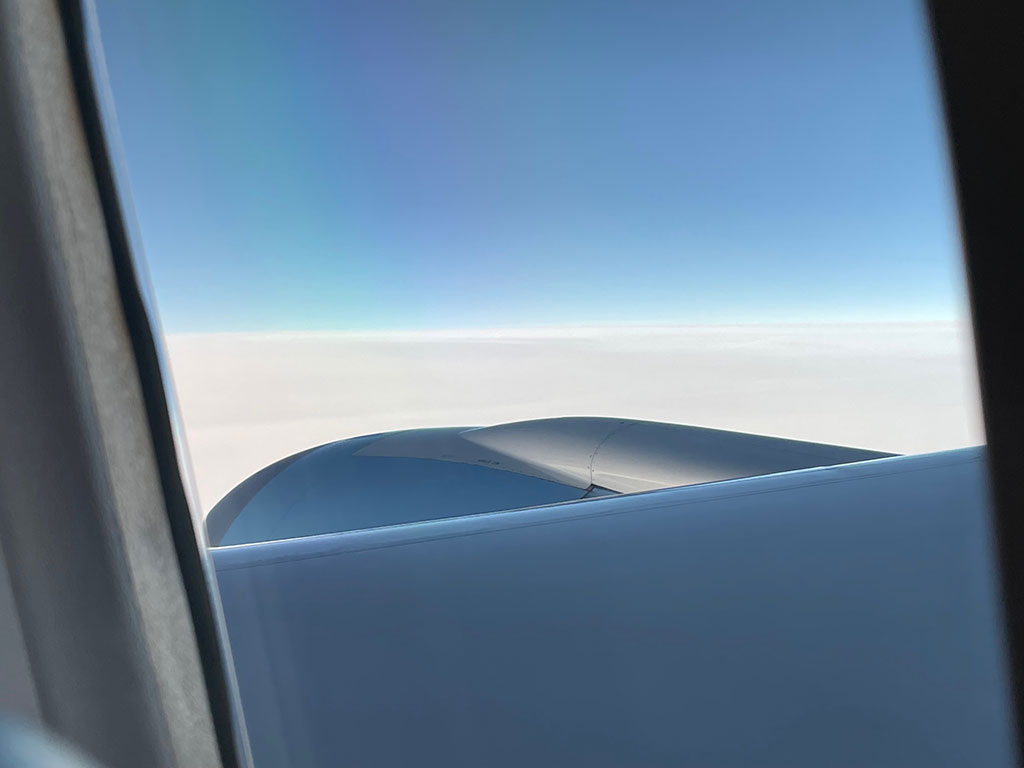 Arrival into Gatwick was from the east, with a few Heathrow departures passing over us on final approach. This flight’s purpose is to continue on to New York JFK, allowing passengers to board at Gatwick. Norse Atlantic will start dedicated UK long haul services using a UK Air Operator’s Certificate in 2023, so this short-haul flight might end then. 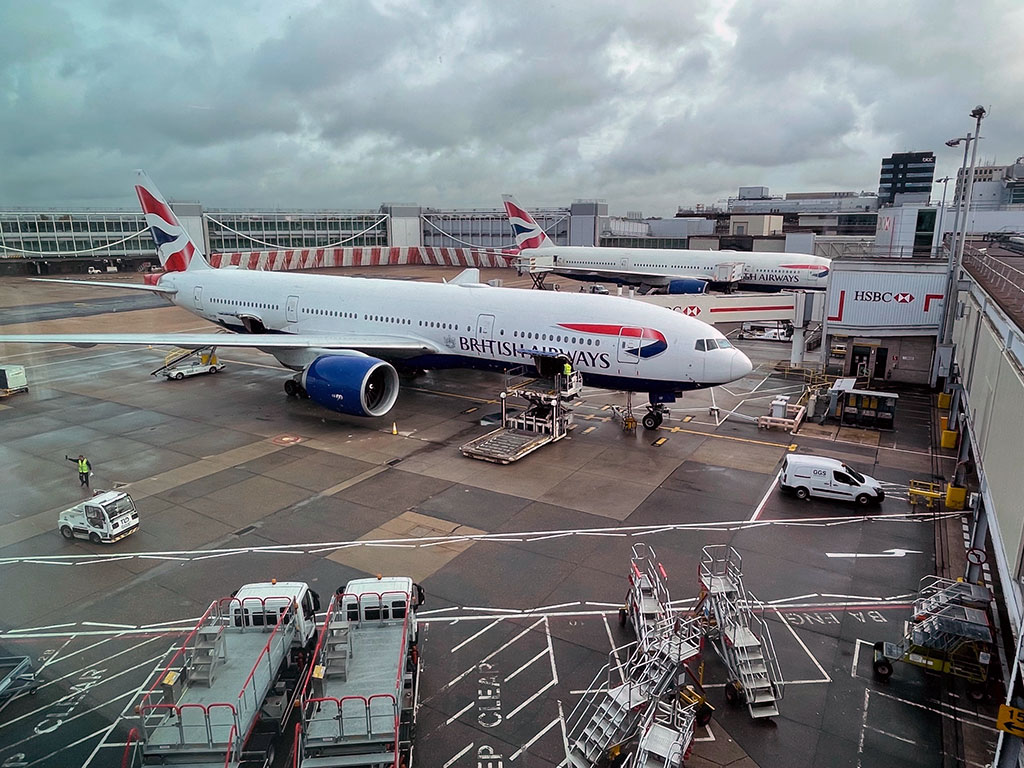 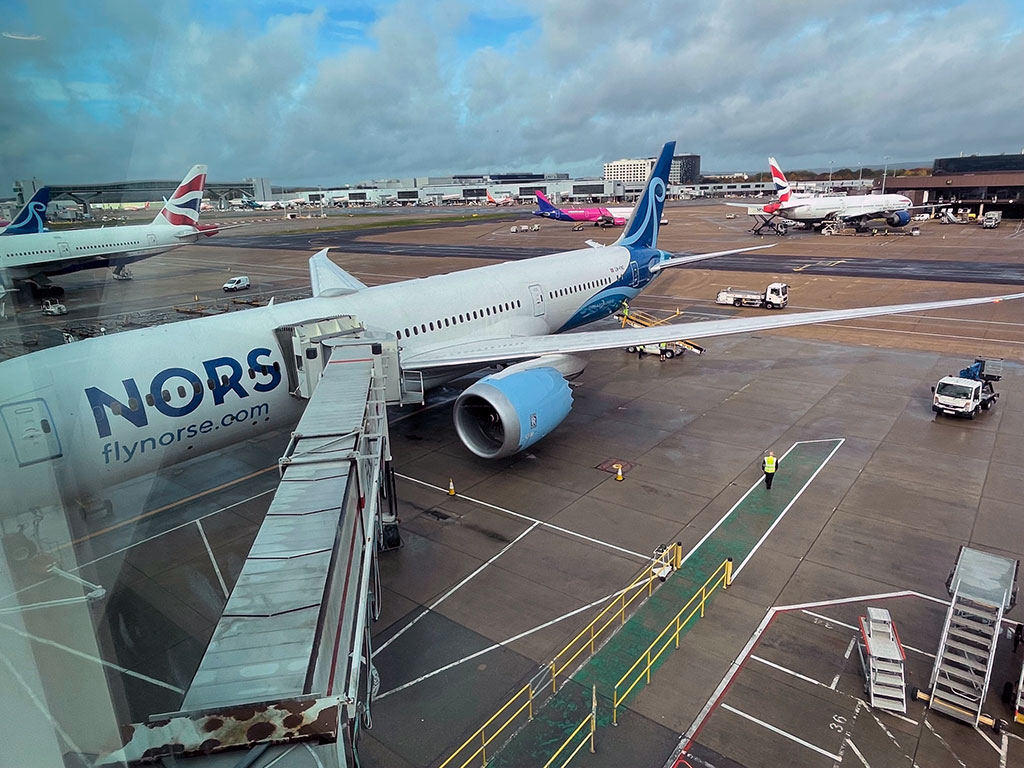 The aircraft parked on the main pier at Gatwick’s South Terminal, near another Norse Atlantic 787 having just arrived from New York. Also alongside were two British Airways Boeing 777-200ERs.

I slowly walked towards baggage claim, enjoying the views of the morning rush. There were Turkish Airlines, Norwegian Air Shuttle, Wizz Air, easyJet, TUI Airways and Aurigny flights all coming and going at the time. 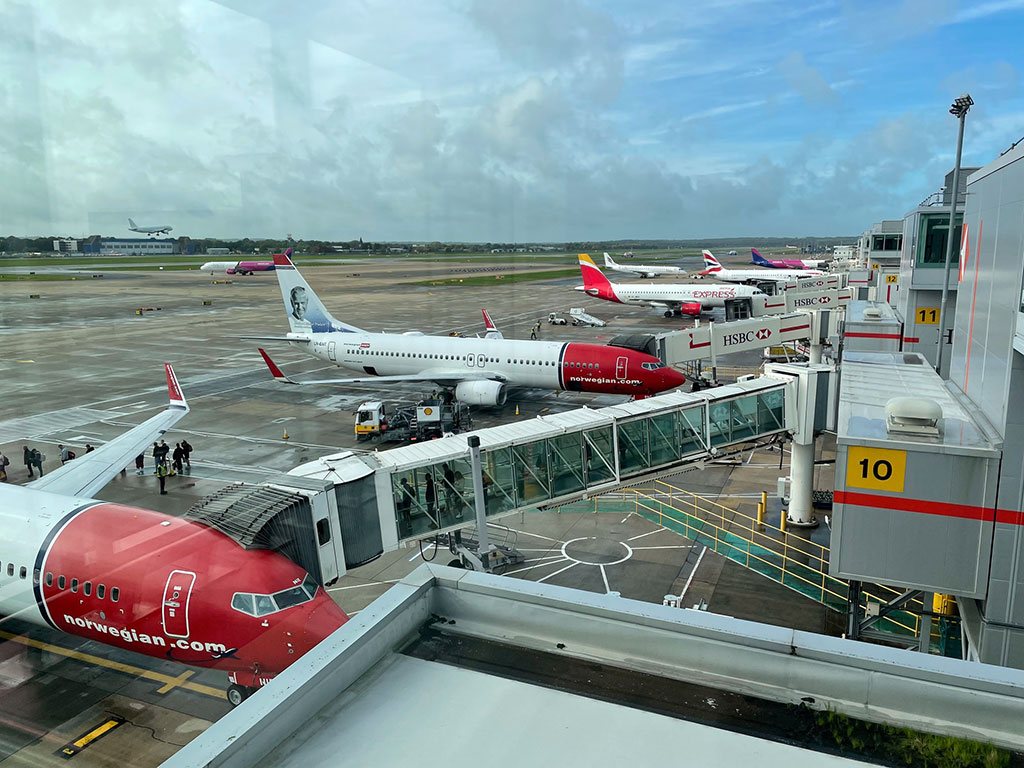 With bag collected, I settled in the Costa coffee shop in arrivals, which has views of aircraft on approach to runway 26L, while I contemplated my plan for the rest of the day.

I had a train to catch from central London that evening, which gave around seven hours to spare.

I chose to visit the RAF Museum at Hendon, but more of that in the next post!