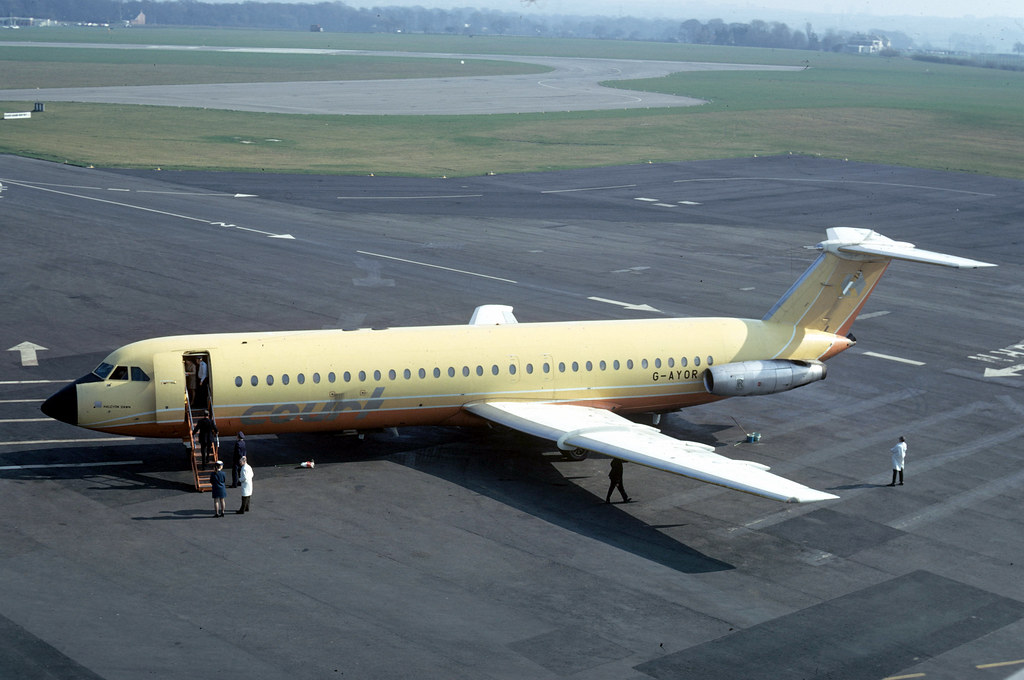 Those of a slightly older age will also remember Autair – a regional airline which operated in the UK and Europe and was the forerunner of Court Line with a varied fleet of postwar airliners which could be seen at most UK airports.

I won’t ask if anyone is old enough to remember that this airline actually came from a shipping background – the famous Court Line, which operated cargo vessels around the world.

In fact, you’d probably be surprised at just how diverse the business was, covering shipping and many aspects of aviation, from charter to helicopter to training work in countries around the world. It seems that the entrepreneurial owners spotted many opportunities and simply went for them, hoping to make a bit of money wherever they could to prop up the whole operation.

This is all the subject of a revised book by prolific aviation author Graham M. Simons, titled Colours in the Sky – The History of Autair and Court Line Aviation, available now from Pen & Sword.

This book was first published in 1997 but, with 20 years additional material and research, and clearly promising sales, it has been brought up-to-date and reworked. In the author’s own words, “With the passing of the years the Autair and Court Line Aviation story seems to have taken on a greater importance, for in hindsight it clearly was a pivotal moment in the story of Great Britain’s commercial aviation scene.”

This sets the scene perfectly, and flows into the history of the company through its shipping interests. This aspect may not attract you too much, but it is important in understanding where the company came from and the entrepreneurial nature of the business, which first started in the mid-1960s.

In all, some 62 different companies operated within the business and brand, from ship repairs to coach travel, tank cleaning to villas, and of course the airlines we know so well. Thankfully it covers in interesting detail, the development of Autair and subsequently Court Line as airlines, looking at their business and route developments, and their aircraft they flew.

The latter days saw the colourful liveries of the One Elevens, and goes into the introduction of the TriStar which was selected for its capacity and range, allowing the airline to deploy as far as the Caribbean. Interestingly, these aircraft reserved the first two registrations in the new G-Bxxx sequence – G-BAAA and G-BAAB when delivered in 1972.

Of course, Court Line was a pioneer in the development of the holiday abroad for the British public, offering packages of flights and holidays in the typical Mediterranean sun destinations for an affordable price.

The book also goes on to detail the significant Caribbean operations of Court Line. The company opened a number of resort hotels in the hope of attracting tourism from North America (and Europe with the introduction of the TriStars) alongside its Clarkson holiday brands. It acquired a significant stake in Leeward Islands Air Transport (LIAT) which helped it develop travel throughout the islands of the region, and whose aircraft also took on a similar range of liveries to those worn by Court Line. During leaner European months, One-Eleven aircraft would often be transferred across to operate in the Caribbean.

The final chapters of the book deal with the untimely demise of Court Line and all of the companies within.

The final flights took place on 15th August 1974. What had become such a large, successful organisation had within it accounting and cashflow problems, and attempts to rescue it in the final moments failed, leaving stranded passengers and the company declared bankrupt.

You may have been lucky enough to see Court Line and Autair aircraft, and have treasured pictures of them, or sightings in your logs. What is remarkable is that some 44 years on, the airline is still relatively well known and fondly remembered, which is an indication of how well it ran for the short period that it did exist.

Graham M. Simons’ book, Colours in the Sky – The History of Autair and Court Line Aviation, is packed full of interesting details, with lots of images from the history of the companies and the people who ran them and flew on them. It makes a great addition to your aviation bookshelf.

You can buy a copy online here: Colours in the Sky – The History of Autair and Court Line Aviation

I remember completing load sheets for the Autair Heralds G-APWB/C/D at Belfast airport in 68 and 69 and in fact the load sheet for the last Herald flt out of Belfast….I would also do the start up on those noisy RR Darts….ear splitting