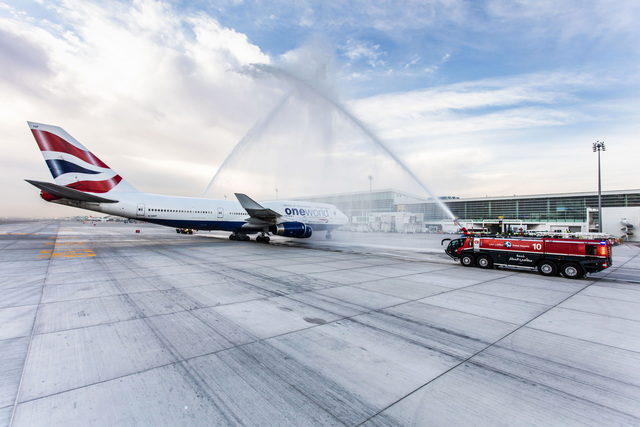 The brand new Dubai Airport Concourse D has been opened to passengers and airliners.

The first aircraft to use the concourse was British Airways flight 105 from London Heathrow, operated by a Boeing 747-400.

The second carrier to use it after British Airways was Royal Jordanian.

This historic first operation followed months of intensive testing and a successful operational trial involving 2,000 members of the public earlier this month. The trial volunteers played the role of passengers arriving at, departing from and transiting through Concourse D, testing way-finding signage, food and retail outlets and the flow of passenger traffic within the new building.

Concourse D is a new extension which is linked to Terminal 1 by a people mover. It features 21 contact gates and 11 remote stands (four will be able to accommodate Airbus A380 or Boeing 747 aircraft), and will be home to 70 international airlines eventually.

The opening of this new concourse at Dubai will allow the airport to reach a new capacity of 90 million passengers per year. It is anticipating reaching 85 million in 2016, so the opening could not come a minute sooner.

Have you flown through Concourse D? Does it offer any views of aircraft through the windows or from the seating and food court areas? Let us know what you think.