Long before the Wright Brothers took to the skies at Kill Devil Hills in their Wright Flyer, Britain was at the forefront of attempts to make manned, powered flight.

It was as far back a 1799 that the first ideas were put forward by Sir George Cayley Bart, and at Leicestershire in 1890 that notable successes in gliding were accomplished.

Oswald Short, one of the founders of aircraft manufacturers Short Brothers, reportedly said after the Wright Brothers’ first flight that it would be the end of ballooning. He added: ‘we should begin building aeroplanes at once.’

Since the Wright Brothers, Britain has gone on to be a true superpower in aviation, developing some of the most notable aircraft and aviators we have known. It may not be as much the case today, but we can certainly cling on to that heritage, and see it moving forward through the pan-European organisations like Airbus, and engine manufacturer Rolls-Royce.

It is with these early days of manned flight in mind that this new book, Pioneering Places of British Aviation, by Bruce Hales-Dutton, seeks to establish the influence of Britain in the amazing achievement of flight.

As the name suggests, it looks at the places where pioneers, scientists, engineers and aviators worked on their ideas and put them into practice, often with far-reaching results which would effect the future of flight in a big way.

Over 15 chapters it uncovers some of these places, starting with the pre-Wright Brothers years at Brompton Hall, Leicestershire, balloon flying at Hendon, and early attempts at flight at Brooklands.

It looks at the birth of London Aerodrome, early flying clubs, Britain’s first military airfield, the first aircraft factory (in a railway arch in London!), World War I aviation, engine development and much more.

Bruce Hales-Dutton is one of the most prolific authors of aviation books and has a reputation for well-researched, readable works. This book is no exception, and includes many stories of the early days of British aviation and the people behind it. It comes well recommended. 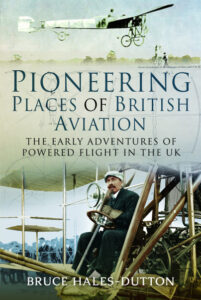 Pioneering Places of British Aviation is published by Pen & Sword, and is available now.